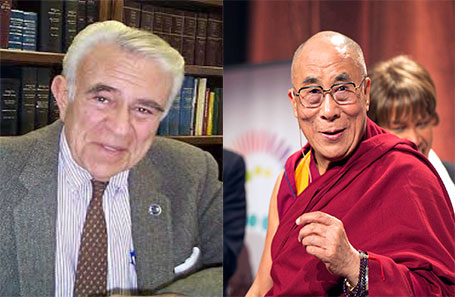 Congressman Benjamin Gilman and His Holiness the Dalai Lama.

Sikyong said: “On behalf of the Central Tibetan Administration, I offer my deep condolences at the demise of Congressman Benjamin Gilman, a true and loyal friend of Tibet and the Tibetan People.”

“As Chairman of the House International Relations Committee, he was instrumental in regularly convening policy discussions on Tibet and introduced or helped pass key landmark legislation relating to Tibet.”

“He was also behind the successful third World Parliamentarians Convention on Tibet in Washington, D.C. in April 1997. He regularly met His Holiness the Dalai Lama and leaders of the Central Tibetan Administration to discuss the situation inside Tibet.”

“For his contribution towards the Tibetan movement, His Holiness the Dalai Lama presented him the ‘Light of Truth’ award. The Tibetan people hold him in regard and will always be remembered for his compassionate stand on Tibet,” Sikyong said.

Congressman Benjamin Gilman is survived by his wife Georgia, three children from his first marriage; two stepchildren; and 11 grandchildren.