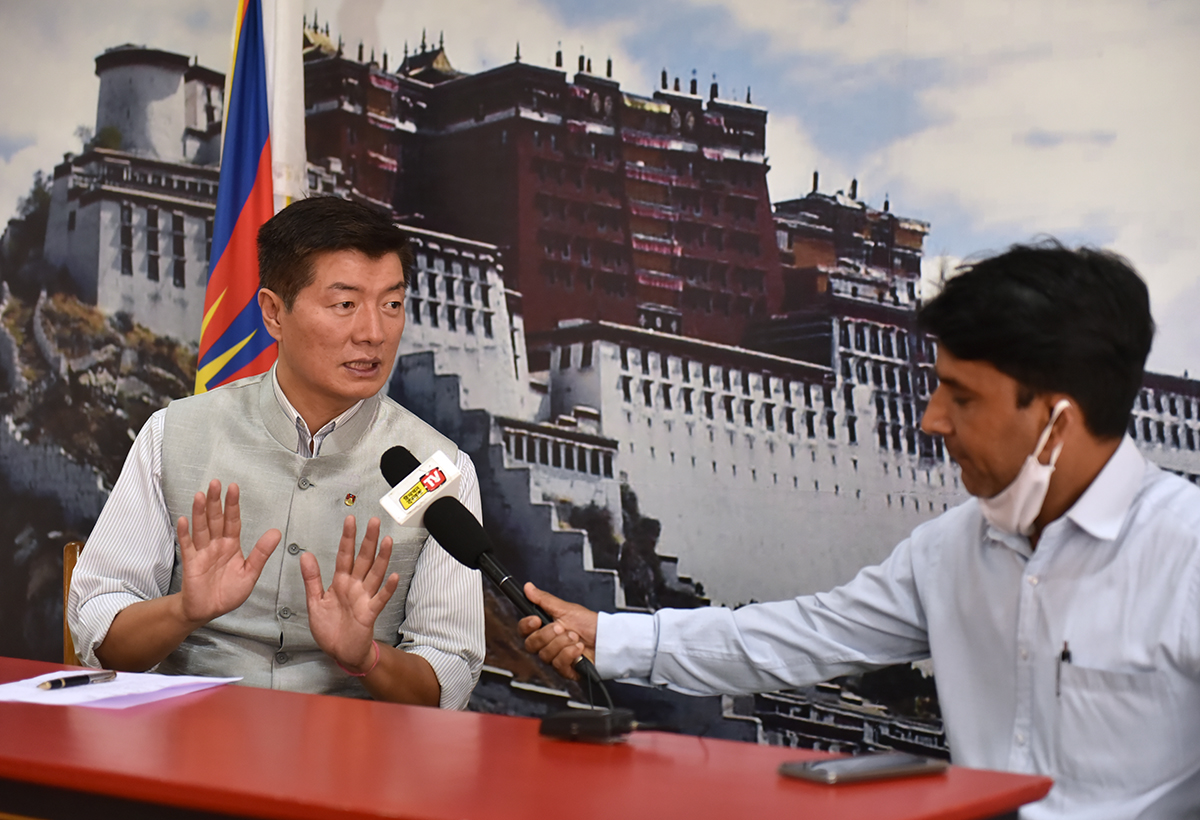 Sikyong speaks to Himachal Dastak on a range of issues concerning the Tibetan movement and CTA’s policies. Photo/Tenzin Phende/ CTA

Dharamshala: CTA President Dr Lobsang Sangay spoke to Himachal Dastak today on the growing momentum for Tibetan issue amidst the COVID-19 crisis, international clamour over China’s lack of accountability and its recent territorial aggressions, CTA’s COVID-19 measures and the case of the enforced disappearance of the 11th Panchen Lama.

Sikyong reasserted the world’s trust deficit with China amidst the latter’s outright denial of accountability for the pandemic crisis on the one hand and simultaneously, the territorial aggressions on its neighbouring countries, leading to international clamour for investigations into the origin of the pandemic and its handling by China that precipitated the crisis.

He cautioned the neighbouring countries to be wary of China’s deceptive tactics that are symbolised in the occupation of Tibet 70 years ago and ongoing repression, stressing the importance of learning from Tibet’s experience.

The President highlighted the significance of the US bill supporting Tibetan autonomy that is expected to pass through the Senate with an overwhelming majority and become law after the President signs it.

On China’s perpetuation of a contradictory narrative to that of Tibetans, Sikyong cited the massacre of millions of Tibetans by Chinese forces at the time of occupation in 1959, the destruction of sacred religious sites and relics, the prohibition of monks and nuns from religious study, to the repressive conditions that sparked self-immolations.

Sikyong stated that China’s interference in Tibetan spiritual matters is absurd in view of the Communist party’s proclaimed atheist beliefs and only Tibetan religious institutions and Tibetan people have authority to decide on the matter, as His Holiness has said.

Similarly, the 11th Panchen Lama’s illegal abduction along with his parents and Jhadrel Rinpoche are a violation of international human rights laws and after sustained campaign pressuring for his whereabouts, China has revealed that the Lama is alive, completed his college education and requests privacy, CTA and Tibetans will continue to demand China to allow the Panchen Lama and his family to appear before international forums and speak for themselves.

As Sikyong was asked about CTA’s policy to combat the COVID-19 pandemic, he enumerated the various initiatives undertaken by the CTA, such as the setting up of community quarantine centres within settlements with provisions of essentials including healthcare, and CTA’s expression of solidarity with the Indian government and the people through voluntary donation of per day salary by CTA staff and similarly, Tibetan public’s contributions to local settlers in the form of ration supplies to the needy, which have been appreciated by the Indian community.