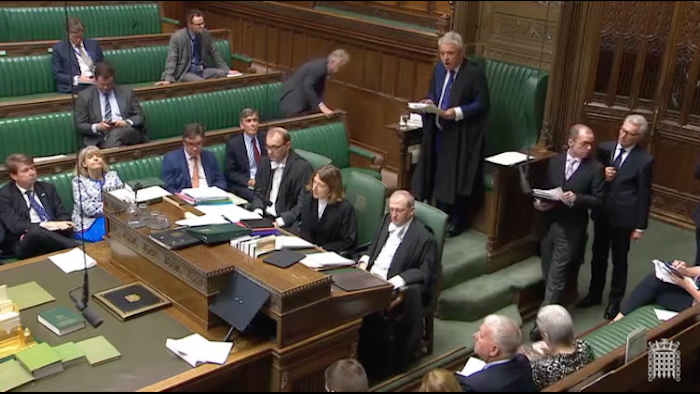 Speaker John Bercow of the UK House of Commons acknowledges the presence of Sikyong Dr Lobsang Sangay, the President of Central Tibetan Administration during a house proceeding in the presence of Prime Minister Theresa May, 26 June 2019.

26th June 2019, London: Boarding the early morning train from Edinburgh, the Sikyong arrived in London mid-day. He headed straight to the Houses of Parliament in Westminster where the Hon Speaker John Bercow was chairing the regular Prime Minister’s Question session in the House of Commons. As the Sikyong took his seat in the Special Gallery, the Hon Speaker acknowledged the Sikyong’s presence in the Gallery and remarked thus:

Sikyong of Central Tibetan Administration, Lobsang Sangay, who has been here before and he is here again. He represents, in a very important way, the people of Tibet. We identify with you, Sir. It is a pleasure to see you again and I think colleagues will feel that way. I am looking forward to see you later today. Please continue your good and important work even in the face of very considerable pressures.

Prime Minister Theresa May was on the floor of the House as the Hon Speaker acknowledged the Sikyong’s presence.

The meeting was held inside the spacious Boothroyd Room, filled to near capacity, with diplomats, Tibet supporters, young interns/researchers, parliamentary staff, Tibetan students and public.

The proceedings for the APPGT meeting began with a welcome speech from the chair – who then invited Hon Speaker John Bercow to address the gathering.

Speaker Bercow expressed his pleasure in meeting the Sikyong again, referring to him as “incredible senior spokesperson of your people”. He said that he was aware of the plight of the people of Tibet and of the strength, sincerity, long-standing character of their legitimate claims.

He recalled fondly his earlier meetings with His Holiness the Dalai Lama in the Parliament and referenced the lunch meeting of June 2012 from which Rt Hon Tim Loughton and Rt Hon Norman Baker, both Tibet supporters and Ministers in the government then, were banned from attending, so as not to offend the Chinese government.

Expressing admiration for the support shown by fellow parliamentarians present at the meeting, whom he referred to as those “who fought the corner for the people of Tibet” and by human rights activists, Speaker Bercow stated in no uncertain terms that “we do not shy away from recognising you, expressing our support for you and the cause of your people”. He concluded by saying that this cause matters and that it needed to be stated explicitly.

The Sikyong then took the floor and began his talk on the topic ‘Geopolitics of China in Europe: Tibet, a case study’, by acknowledging his gratitude for the presence of Hon Speaker John Bercow, Parliamentarians, diplomats and public.

He stated that the Hon Speaker’s unprecedented presence at the meeting and his referencing of Sikyong’s presence in the House of Commons Gallery from the Speaker’s chair (first of its kind for Tibet) sends a powerful message to the Chinese government, and also a message of hope and optimism to Tibetans inside Tibet – that we have steadfast supporters outside in the free world.

The Sikyong referenced the Freedom House report that ranked Tibet as the least free country in the world behind Syria for consecutive years and called on the UK government to replicate the US success of the Reciprocal Access to Tibet Act.

Stating from recent examples when Members of Parliament who attended the World Parliamentary Convention on Tibet in Riga were earlier advised against attending, and the current plight of two Nepalese MPs that attended the Riga Convention who were reprimanded by the party, the Sikyong talked about China’s increasing negative influence around the world.

Referring to CCP’s policy during the period 1950s-1960s when the Chinese authorities destroyed more than 98% of the monasteries in Tibet aimed at eliminating all traces of Tibetan religion, culture and identity, he remarked how with the blessings of His Holiness the Dalai Lama and through the concerted efforts of the Tibetans in exile, Buddhism was revived the world over, and this he highlighted as spiritual victory over China. He expressed optimism that gradually Tibetans would replicate this success on the political front as well. He based this optimism on the determination and strength of the Tibetans inside Tibet who, he said, continued to remain non-violent and peaceful against intensifying repression.

He mentioned the Belt and Road Initiative and remarked how a single road built by the Chinese in the 1950s eventually led to their occupation of Tibet as the road was later used to bring in jeeps, trucks, military and guns. He also referenced the tactics employed by the Chinese of co-opting the elite in Tibet, which is being successfully replicated around the world, especially in Europe. He also mentioned China’s successful attempts at restructuring the UN and redefining ‘human rights’ thereby fundamentally undermining democracy.

Clarifying that the Middle Way Policy and the One China principle are compatible and not contradict one another, he called on the UK government to support CTA’s efforts to seek dialogue between envoys of His Holiness the Dalai Lama and the Chinese leadership. “If you support freedom, truth and justice, you ought to support Tibet”, he said.

At the end of his talk, he received a standing ovation from all. Speaker Bercow stayed back till the end of the talk and then left, spending almost an hour at the meeting, despite all the huge demands on his time.

After an interactive question & answer session, the Sikyong was welcomed at “The Chess Room” where the Tibet Society hosted a dinner in his honour.

Tomorrow, the Sikyong will be doing two interviews, and will also be speaking at the Caledonian Club, a private members club in London with rich history.

President Dr. Lobsang Sangay presents a talk on ‘Geopolitics of China in Europe: Tibet, a case study’ at the All Party Parliamentary Group for Tibet Meeting at Boothroyd Room, Portcullis House, London. 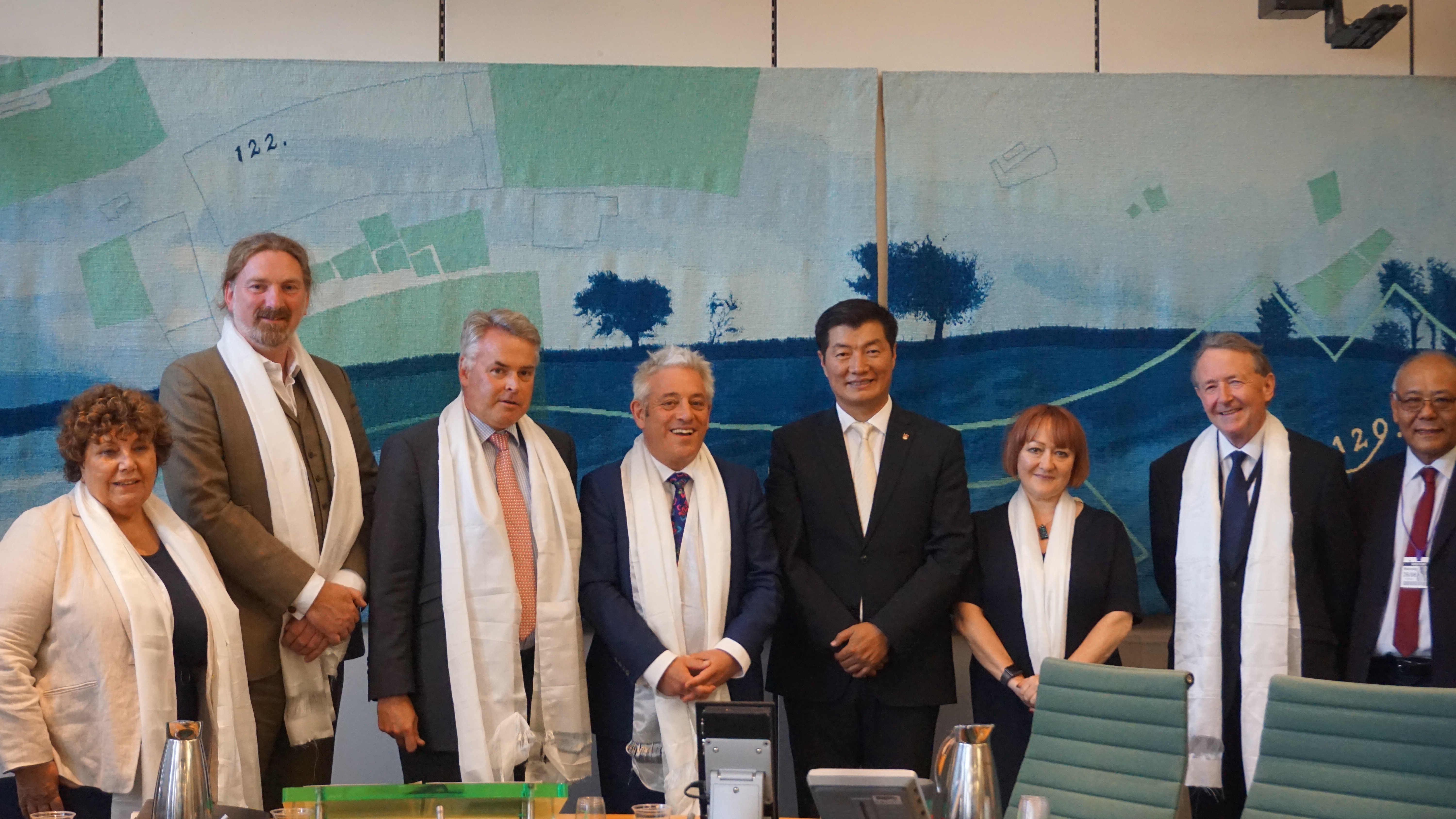 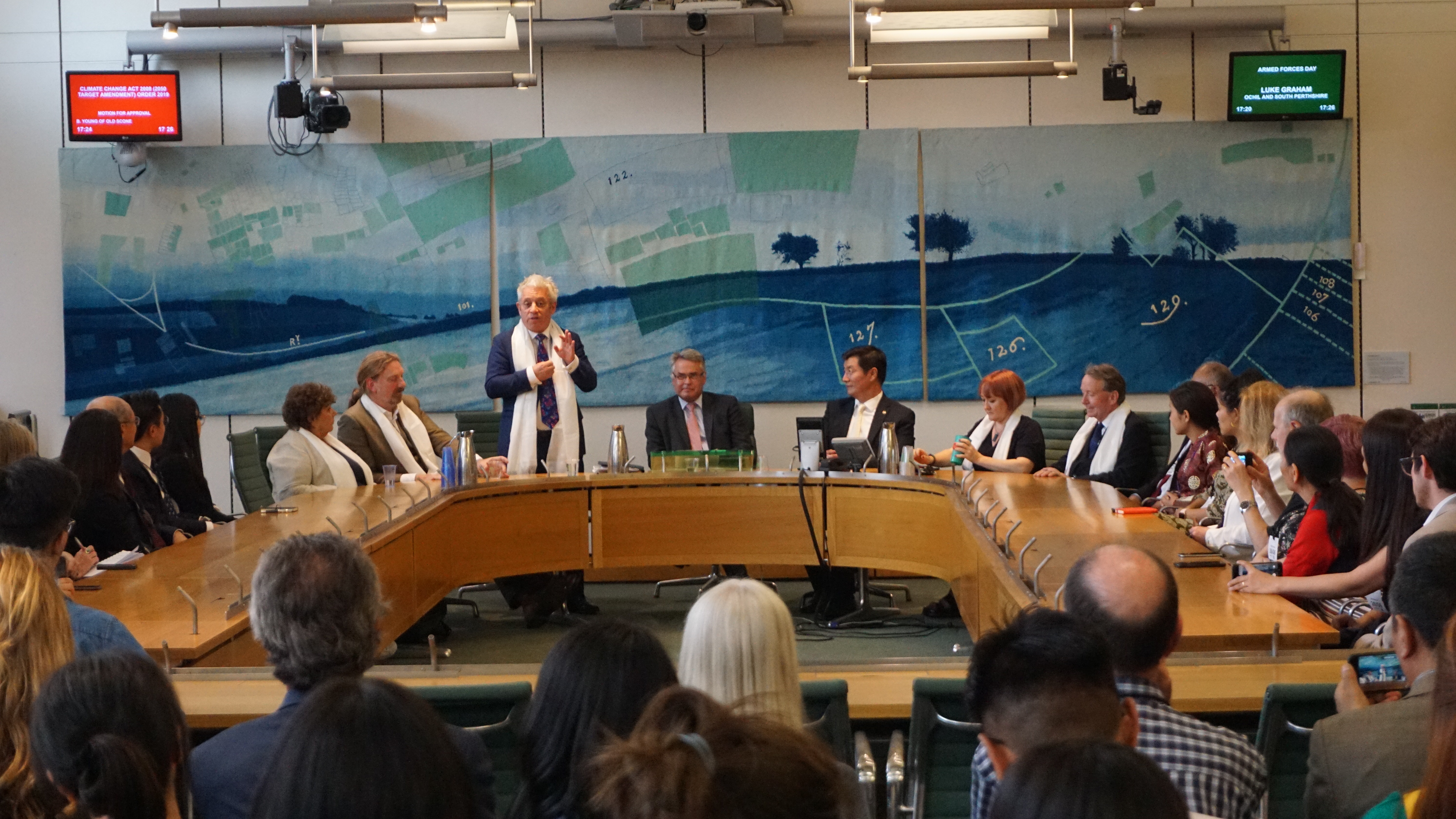