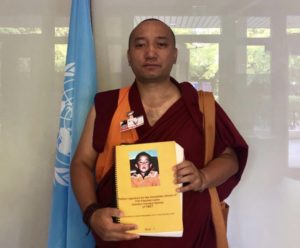 Geneva: At the ongoing 41st session of the UN Human Rights Council signature petition calling for the immediate release of the 11th Panchen Lama and Jadrel Rinpoche was submitted to the UN Office of the High Commissioner for Human Rights on 3rd July.

Jadrel Rinpoche, the abbot, and head of the search team to identify the reincarnation of 10th Panchen Lama was sentenced to imprisonment for six-year in 1997 under the alleged charge of “leaking state secret”. The person term completed in 2003. However, he was not release; his well- being and whereabouts continued to remain unknown.

The petition demands UN intervention and calls China to –

2-    Reveal the well-being and whereabouts of the Panchen Lama

4-    Give unfettered access to Tibet to the UN mandate holders and independent observers.

Ven Lobsang Dorjee also spoke at the side event spotlighting China’s continued abduction of Panchen Gedhun Chokeyi Nyima at a side event held on 2 July, prior to submitting the signature petition. 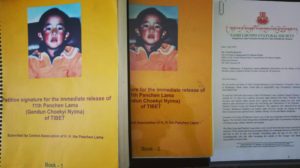