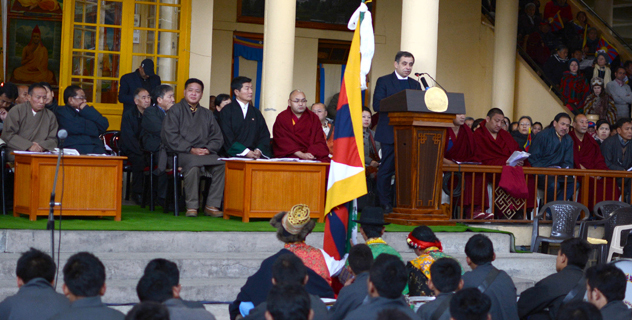 Mr. Henri Malosse, President of the European Economic and Social Committee, addressing the 55th anniversary of the Tibetan National Uprising Day in Dharamshala on 10 March 2014.

DHARAMSHALA: A delegation led by Mr Henri Malosse, the president of the European Economic and Social Committee (EESC) of the European Union today attended the 55th anniversary of the Tibetan National Uprising Day in Dharamsala, the seat of the Central Tibetan Administration in exile. Mr Malosse reiterated the EESC’s commitment to support the CTA’s Middle Way Approach and engage the Chinese government in dialogue with the Tibetan leadership to resolve the issue of Tibet.

Mr Henri Malosse said the delegation of the European Economic and Social Committee visited Dharamsala to show support to the case of Tibet, which he said is a universal issue of freedom, dignity and liberty of Tibet and the Tibetan people. “The Tibetan nation has been deprived of its dignity and freedom for a very long time. So, I came here to express my solidarity with the Tibetan people and other people oppressed by the Chinese government including the Chinese people,” he said.

He reiterated support for the Middle Way Approach as a pragmatic and realistic way forward proposed by the Tibetan people, based on the principle of interdependence, to seek genuine autonomy in Tibet through dialogue with the Chinese government. He said the Middle Way Approach will produce a result in the interest of both Tibetan and Chinese peoples.

The EESC president said its priority is to save the identity and culture of the Tibetan people which is being threatened under the repressive rule of the Chinese government.

Mr Malosse applauded the democratic governance of the Central Tibetan Administration as a model organisation and its effective welfare and education of the Tibetan refugees.

Later addressing a meet the press event, Mr Malosse spoke about his recent meeting with the Chinese ambassador to the EU, who told him not to interfere in China’s internal affair in view of his visit to Dharamsala. He told the Chinese Ambassador that the issue of Tibet is a global concern and dialogue on human rights in Tibet a part of EU-China Strategic Dialogue.

Mr Malosse said he has been invited by the Chinese government to visit Tibet and expressed hope that he would be able to visit soon.

Responding to questions, Mr Malosse said the EESC would make efforts to have a EU Special Coordinator for Tibet. 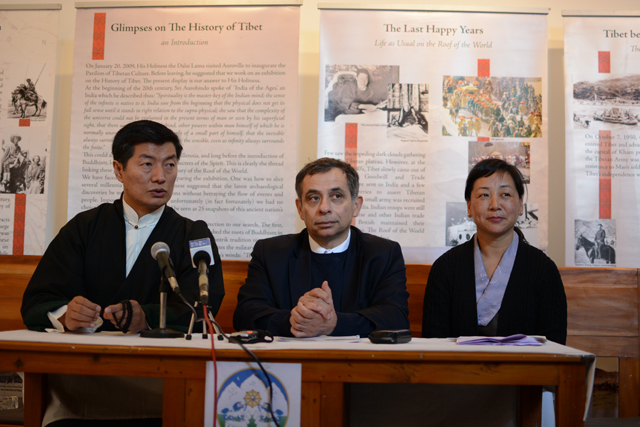 Mr. Henri Malosse, the President of the European Economic and Social Committee speaking to reporters on 10 March 2014.

Sikyong Dr Lobsang Sangay said: “We express our profound gratitude to you for coming to Dharamsala and showing solidarity with the Tibetan people. In your position as the president of the European Economic and Social Committee and to partake in the 55th anniversary of the Tibetan National Uprising Day sends a strong message to the international community that freedom is universal and it sends a message of hope to the Tibetans inside Tibet that we have friends around the world who hear them and support them as well.”

“I thank your gesture for physically coming here to support Tibet and the Tibetan people despite pressure from the Chinese government. We appreciate your two specific reasons for coming to Dharamsala to support the Middle Way Approach as the realistic way forward which should be  considered by the Chinese government to resolve the Tibet issue through dialogue. Secondly, your acknowledgement of the Central Tibetan Administration as a successful organisation or an entity which is taking care of the Tibetan refugees which could serve as an example for other marginalised people around the world. We take pride in saying that the CTA is functioning quite effectively for the last more than fifty years and have been quite successful not just in looking after the welfare of Tibetan refugees but also keeping our culture, identity alive and vibrant,” Sikyong said.

“We are pleased to welcome him again as the president of the European Economic and Social Committee to Dharamshala. It means a great deal to the Tibetan people that you have travelled this far with your colleagues to express solidarity with the plight of the Tibetan people on the 55th anniversary of the Tibetan Uprising day,” said Kalon Dicki Chhoyang of the Department of Information and International Relations.