The Dalai Lama’s political successor and Tibetan prime minister-in-exile Lobsang Sangay has significantly stepped up his outreach as the Tibetan issue slides further into global amnesia.

A dozen self-immolations by desperate Tibetans since February, 2009, including 11 since March this year alone, has not done much to focus the world’s attention divided as it is between a slew of global economic and geopolitical crises.

In recent days Sangay, who is the first exiled Tibetan elected leader to inherit formal political powers historically invested in the person of the Dalai Lama, has acquired a stronger public profile than any of his predecessors.

Since his election in April, Sangay is embarked on what appears to be a conscious strategy to reignite interest in the Tibetan cause in important capitals where the preoccupation has increasingly been the global economy. After a strong showing during his visit to Washington, Sangay went around European capitals with the overriding message that without a strong moral foundation China would find it impossible to be taken seriously as an emerging superpower. And a lot of that moral foundation will have to be built out of Tibet where it is facing serious challenges. 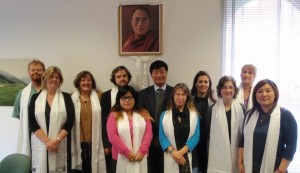 Kalon Tripa with representatives of UK based Tibet groups following their meeting held at the Office of Tibet, London, on 1 December 2011

Sangay is aware that he has a tough job trying to get the West to pay more attention to what is going on inside Tibet at a time when the Chinese role in ensuring global economic stability has begun to rival that of the US. A potential Tibetan uprising is not something either America or Europe considers a major priority when they are facing internal unrest resulting from their own economic decline.

As Josh Rogin of Foreign Policy journal noted, “Earlier this year, the self-immolation of one Tunisian fruit vendor sparked a region-wide series of revolutions that upended autocrats around the Middle East. Meanwhile, no less than 10 Tibetan monks have set themselves on fire this year to protest Chinese repression in their homeland, but the international community has yet to take notice.”

The Kalon Tripa, as the prime minister is referred to as in Tibetan, has been a low-key figure until recently because the office was mostly administrative and without any real political powers. In May this year that situation changed dramatically when for the first time in 369 years the Dalai Lama’s political and administrative powers were formally transferred to the office of an elected Tibetan leader. In approving the amendments to the 1991 Charter of the Tibetans in Exile, the Dalai Lama made his “semi-retirement” more formal.

The transfer fulfilled a commitment the 76-year-old Tibetan leader made to himself and public decades ago to step back from exercising complete control over Tibetan affairs, such as it is with Tibet having been incorporated into China for more than 50 years. The approval of the amendments may not have any immediate consequence but is potentially important in the event of the 14th Dalai Lama’s death. Now that those powers have been detached from his person and enshrined in an elected government, the transfer empowers the Tibetan administration to take a formal position on the future of Tibet.

Sangay, a 43-year-old Harvard educated legal scholar, seems to recognize the importance of reminding the world of what is going on inside Tibet. In an interview with the BBC, he said he would be “more active and forthright about the situation inside Tibet”. To that end his visits to the US and Europe saw a defined presentation to the Western powers. During his address to the European Parliament’s foreign affairs committee Nov 29, he was introduced as “Prime Minister of the Central Tibetan Administration” despite protests from the China’s European Union (EU) mission.

Sangay’s message to the EU was that it should not uncritically accept that China has emerged as an economic superpower. Citing India’s economic model he told the EU Observer in an interview in Brussels, “As long as a process is democratic and based on rule of law, rather than top-down, there is more chance of its being fair and sustainable. Because of censorship, we do not see the damage (the Chinese government) is doing. We don’t understand the ramifications of the economic and political decisions made by the leadership.”

Separately, like the Dalai Lama, the prime minister-in-exile has also emphasized the moral deficit in China’s quest to become a superpower. “China wants to be a superpower. It has money power, military power but no moral power. China ought to earn respect from respect from the international community. As long as the Chinese government continues its repressive policies and treats Tibet as the way they are doing they will never get the respect they should have,” he has said.

For Europe, significantly weakened by its widespread economic crisis, China is the most promising potential source of investment and aid. In return Beijing wants Europe to recognize it as a full market economy. “Recognizing China as a full market economy is a way a friend recognizes a friend,” Chinese Premier Wen Jiabao said at the World Economic Forum summit recently. With that as the backdrop and its debilitating debt crisis, it is anybody’s guess whether Europe takes the moral route on the question of Tibet as suggested by Sangay or the more expedient economic route as dictated by the circumstances.

What is strikingly different about Sangay’s emergence is that for the first time since the Dalai Lama came to India in exile in 1959, secular diplomacy is powering Tibet’s international interactions. There is a perceptible difference in the optics of a young, western attired prime minister talking about Tibet and an ochre-robed monk doing the same. The irony is that Sangay’s rise is a direct consequence of the same monk’s decades-long effort to democratise political decision-making among the exiled Tibetans.