Dharamshala: Chaired by Speaker Mr. Pema Jungney, the second day of the 10th session of the 16th Tibetan Parliament-in-Exile successfully convened a debate on the Official Solidarity motion on the critical situations inside Tibet, a continuation of the previous session, in which a total of 17 Parliamentarians participated. While paying tribute to the sacrifices made by Tibetan patriots inside Tibet, the discussion emphasized upholding Tibetan unity and protecting the Tibetan language and culture which remains the true aspirations of the Tibetans inside Tibet.

The discussion further mentioned the importance of the productive approach in resuming dialogue between the envoy of His Holiness the Dalai Lama and Chinese counterpart and suggested intensifying the current outreach on the ‘Middle Way Approach. Tibetans in Tibet are facing discrimination in the field of job opportunity, travel, education, etc., therefore, Tibetans in exile being the representative of the Tibetans living in Tibet have to use all the available platforms to campaign for Tibet’s issue. Likewise, they raised other important issues inside Tibet such as human rights violations, censorship of information, destruction of culture, and many other critical issues.

During the discussion, the Parliamentarians also appreciated Tibetans in India and abroad, who are organizing solo and mass rallies, and campaigns within individual capacities to raise awareness on the Tibet issue and suggested providing assistance to them.

The session continued with debate on the statement of Finance Kalon and précis 2021-2022 budget report by the Budget Estimate Committee and clarifications provided against the doubts and questions.

A total of 11 Parliamentarians tabled opinions and suggestions and raised various questions, many of them appreciated the Kalon for Department of Finance and staff in proposing the budget and also acknowledged the Budget Estimate Committee for the reviewed report. While some of the members raised questions with regard to the loans – both commercial and non-commercial – provided by the Finance department, queries on green book & Tibetan voluntary contribution, budget allotment on COVID-19 related project and on social media.

Concerns regarding the unresponsiveness of the Tibetans living in the west on paying Tibetan voluntary contribution was also raised. The MPs urged each and every Tibetan to contribute. 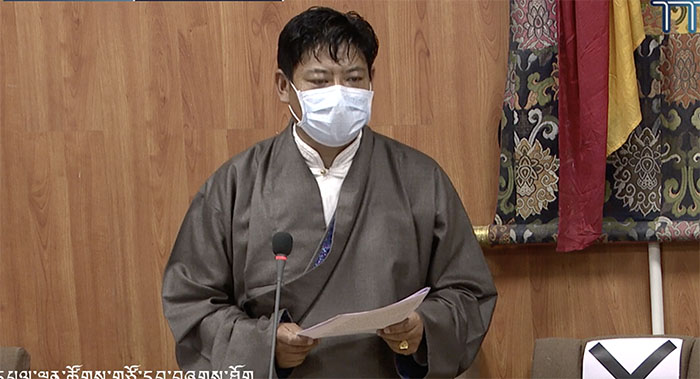 Some parliamentarians also shared concern about the immigration of young Tibetans to the west. Suggestions were made to provide assistance to Tibetan sweater sellers, providing educational materials to the Tibetan students in remote Tibetan settlements with schools being closed and the internet unavailable during the pandemic, and there were also suggestions on increasing Buddhist education scholarships to the monks and nuns.

Finance Kalon Karma Yeshi in his clarification, informed the increase of CTA corpus fund in the past 10 years and clarified other queries raised on corpus fund. Likewise, he also issued clarifications on loans provided by the Department of Finance. Answering questions of Parliamentarians on the green book, the Kalon informed everyone of the pilot green book digitalization project and voluntary contribution aiming to benefit Tibetans living in the West.

Parliamentarian Khenpo Sonam Tenphel, the Chairman of the Budget Estimate Committee clarified questions raised on the corpus fund and project fund of the Department of Education, funds allotted for the COVI-19 vaccination (Department of Health), on CTA corpus fund, and others.

The session adjourned till Wednesday morning. 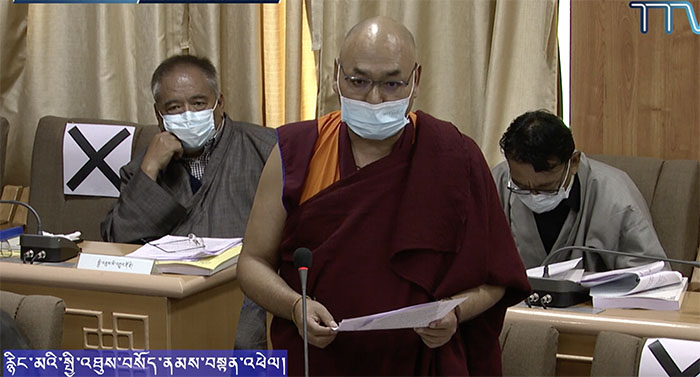