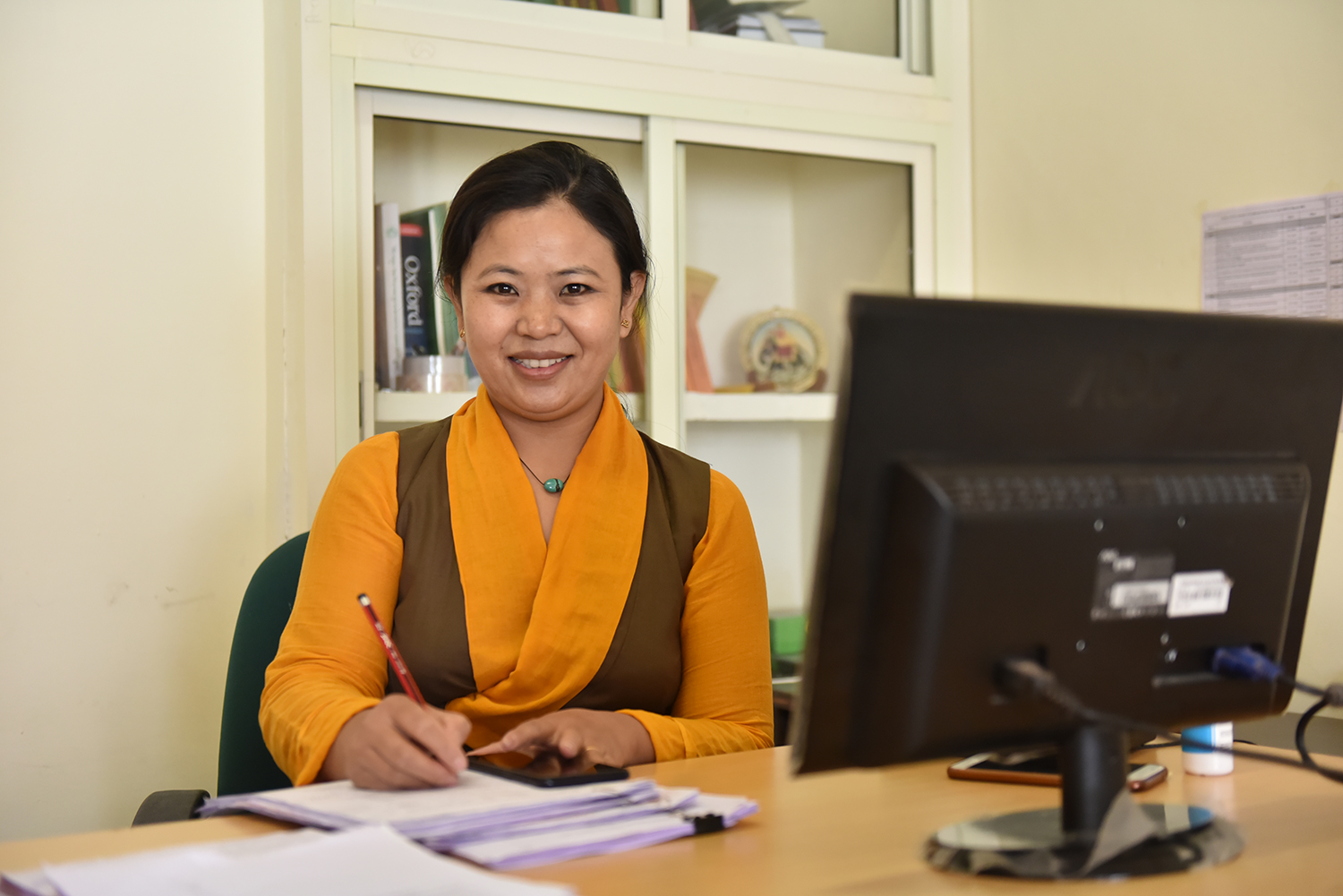 Tenzin Palkyi (TP): I am Tenzin Palkyi and I am from Sonamling Tibetan Settlement, Leh Ladakh. I was born on 30th May 1982. I did my primary and secondary schoolings in TCV Ladakh and for senior secondary schooling, I opted Arts stream in Upper TCV. After graduating from school, I pursued my Bachelor (B.A) in the Tibetan Language from College for Higher Tibetan Studies, Sarah. Under the scholarship and administration of the Education Department, I did my Bachelor in Education (B.Ed.) from Sarah. I also did a corresponding course in Bachelor of Arts (B.A) from Delhi University.

Prior to joining the Central Tibetan Administration, I taught English and Tibetan language at Sherab Gatsel Lobling School, Dharamsala for one and a half years. In 2008, I joined the Central Tibetan Administration. From 2008 – 2013, I served as an Office Superintendent at the Department of Home. In 2013, I got transferred to Shimla Tibetan Settlement for the post of Accountant cum Secretary. After completing six months of service in Shimla, I got transferred back to Dharamsala and worked at the Kashag’s Historic and Documents Classification Section for almost six years.  Since 7th May 2019, I  have been working at the Education Department for the post of Section Officer.

I am working in the Traditional Academic Section where our main responsibility is to oversee and promote the preservation and improvement of the Tibetan language and to help the organizing team with various workshops for both students and teachers. We also organize Tibetan essay writing and handwriting competitions, Dialectic Meets (among all the Tibetan schools), Class 10 Leadership workshops, etc.

My work includes collecting the names of toppers of annual Tibetan Language exams, and 12th CBSE board exams (First three toppers from each stream) from Tibetan schools across India and Nepal, and awarding them with a cash prize and prestigious awards like Gadhen Phodrang Award, etc. With the aim of improving the reading habits of the students, we work in the establishment of small libraries at schools and hostels.

My job mainly revolves around interacting with colleagues and other people like booksellers, school administration, teachers, students, etc. So, I am having experiential learning that helps me perform better each day. It has taught me how important it is to be soft-spoken and understanding. I believe that when you adopt such traits, you are able to perform better and that in turn gives a strong sense of satisfaction towards the end of the day.

SME: What inspired you to serve the CTA?

TP: My father didn’t go to a formal school but he was very good at the Tibetan language. When our family gathered during holidays, our father always made sure to check on his children’s performance at school. He focused more on checking our Tibetan handwriting and language. He always told us that if we study the Tibetan language, then we can serve Tibetan society and humanity in a better way. Since I also take a great interest in the Tibetan language, I pursued my B.A and B.Ed. in the Tibetan language from the College for Higher Tibetan Studies, Sarah. Becoming a Tibetan teacher was my sole ambition back then. And I even got to teach at Sherab Gatsel Lobling, Dharamsala for one and a half years. However, due to certain health issues, I had to leave my teaching job. After I got better, I sat down for the civil servant exam and thus got the opportunity to serve in CTA. It is my belief that it was the role of fate to bring me to serve our community through CTA. And I feel privileged.

Thus, I would like to conclude by saying that what I have achieved so far and been able to give back is all because of my father’s consistent advice and guidance.

TP: Due to the blessings of His Holiness the 14th Dalai Lama, we all have gotten the opportunity to work at Central Tibetan Administration. And it is a fact that we all are working firstly to earn a living. But, while working, it shouldn’t be only for the purpose to earn a living but also with the motivation to pay the gratitude to His Holiness and all the people who have worked relentlessly to establish this administration.

I feel grateful to be in a position to give back and help the Tibetan communities in every little possible way through my service. This is how CTA means to me.

TP: Central Tibetan Administration is like a mother to whom all the Tibetans confide in. Hence, I feel it is extremely important for all the civil servants to have a good working relationship with one another and be supportive of each other at work. It is also important to have good work ethics such as honesty, dedication, responsibility, and respectfulness.

I am not complaining that there is an absence of such work ethics at our administration, but sometimes there arises a situation out of unintentional negligence.

Even though we are here to fulfill the needs of all the Tibetans but there are certain expectations of the public that cannot be fulfilled. Hence, we the staff can address them with gentleness and can provide them with suitable guidance. When we resort to such practice, the public understands us and respects the administration as a whole. And that I have experienced it myself. So, I feel that along with proper work ethics, being gentle and soft-spoken is equally helpful for the smooth running of our administration.

Sticking to such traits is the little difference that I think I have been able to make and I will continue to do the same in the years to come.

TP: Diki Tsering la, mother of His Holiness the 14th Dalai Lama is my role model. I have read many biographies of her. She was a very loving and compassionate woman, who never discriminated against anyone on the basis of any social differences. She treated the underprivileged with an equal amount of love, respect, and generosity.

Among the many good deeds that she had done, I would like to mention two incidents that I read in one of her biographies. First, even after having so many servants at home, she still woke up earlier than them. She used to prepare the meals and finished all the chores all by herself. And this is a very rare thing to see in our communities.

Second, before the occupation of Tibet, Gyalyum Chenmo ( Diki Tsering is famously known for) and her families used to be well dressed during festivals in Lhasa. After losing everything and coming into exile, the majority of the Tibetans were poor. So, she exempted herself and her children from dressing up in order to look the same as the public. She told her children to behave like the other Tibetan children. These incidents show how kind, understanding and loving she was.

She was born to a peasant family and never got a formal education. She is a special figure who has been blessed for being a mother to three revered reincarnated Rinpoches: His Holiness the 14th Dalai Lama, Taktser Rinpoche, and Ngari Rinpoche. She is also famously remembered by many for being a “Mother of Compassion”. And His Holiness often tells us that his mother was the first teacher who taught him to be loving and compassionate to all.

After reading about her, I see myself getting influenced by her acts while working and parenting. She inspires me to become a good human being and thus she is my role model.

TP:  Irrespective of age and any profession, it is important to be cooperative, united, honest and creating a healthy working atmosphere. Since the Central Tibetan Administration represents Tibet, I feel that those who are serving or willing to serve CTA have an extra responsibility.

One of the main reasons for all the love and support that we have received until now from the international is all because of the humbleness of the Tibetans. Because of that, we have been able to achieve so much in exile.

Since our administration has been established solely to look after the welfare of the Tibetan people, we as civil servants must do our duties with full determination. Along with that, it is important to create a healthy working atmosphere to make one another feel happy to be coming to work every day. For that, one should keep a healthy relationship with their co-workers and should have an understanding of each other’s problems. I feel these little things have a great impact on our overall performance at work.

Like I mentioned earlier, every staff of CTA or those willing to serve CTA in the future must strive towards improvements, be it with their work, relationship with colleagues or being respectful especially towards the senior staff. 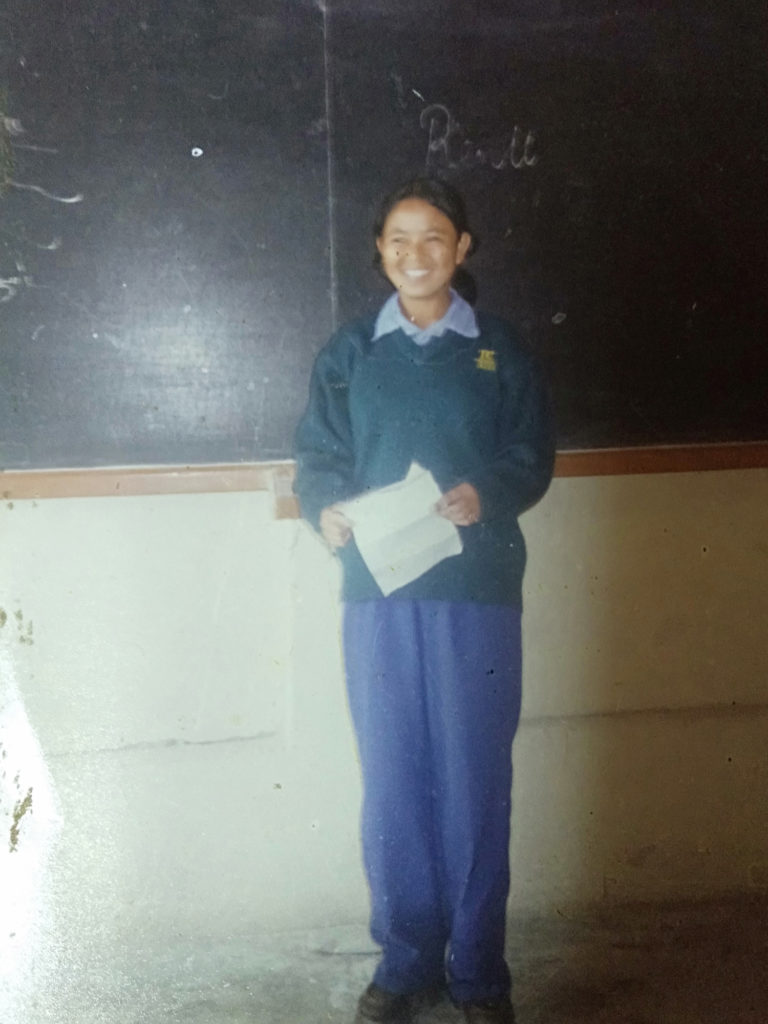 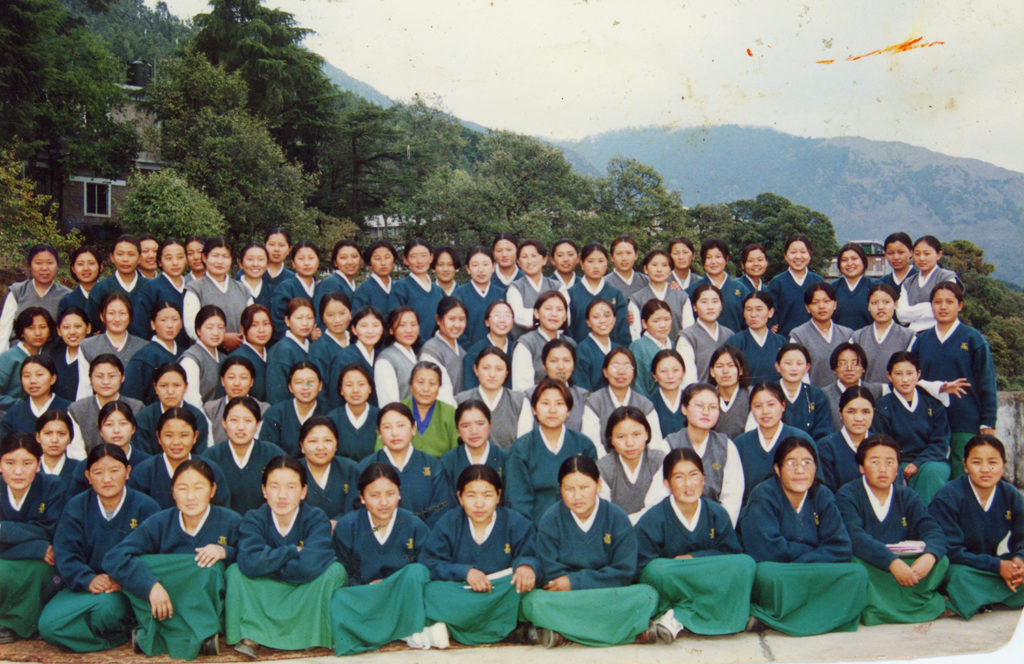 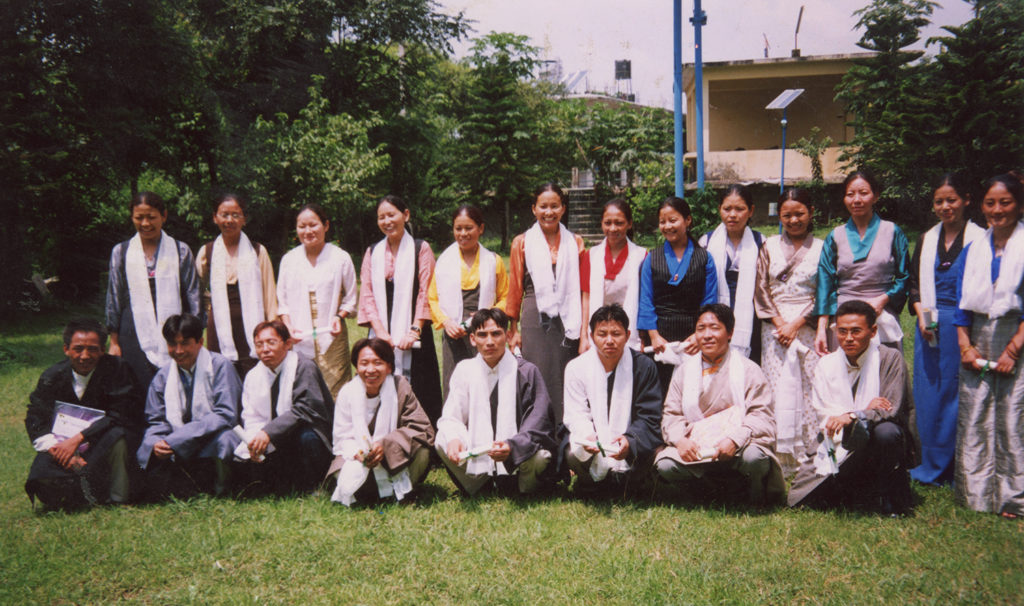 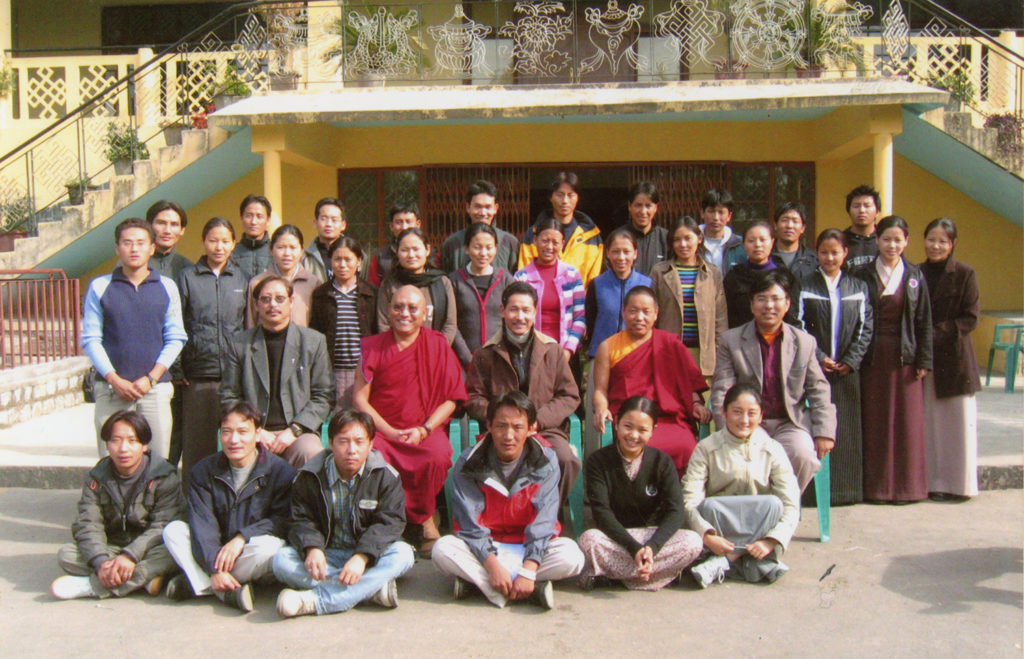 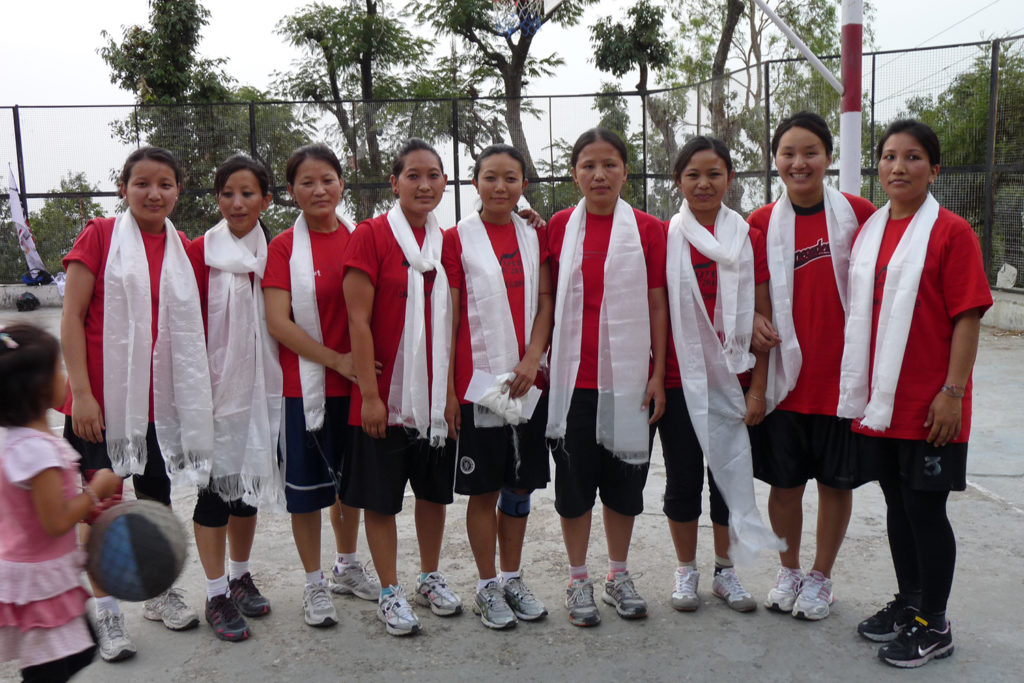 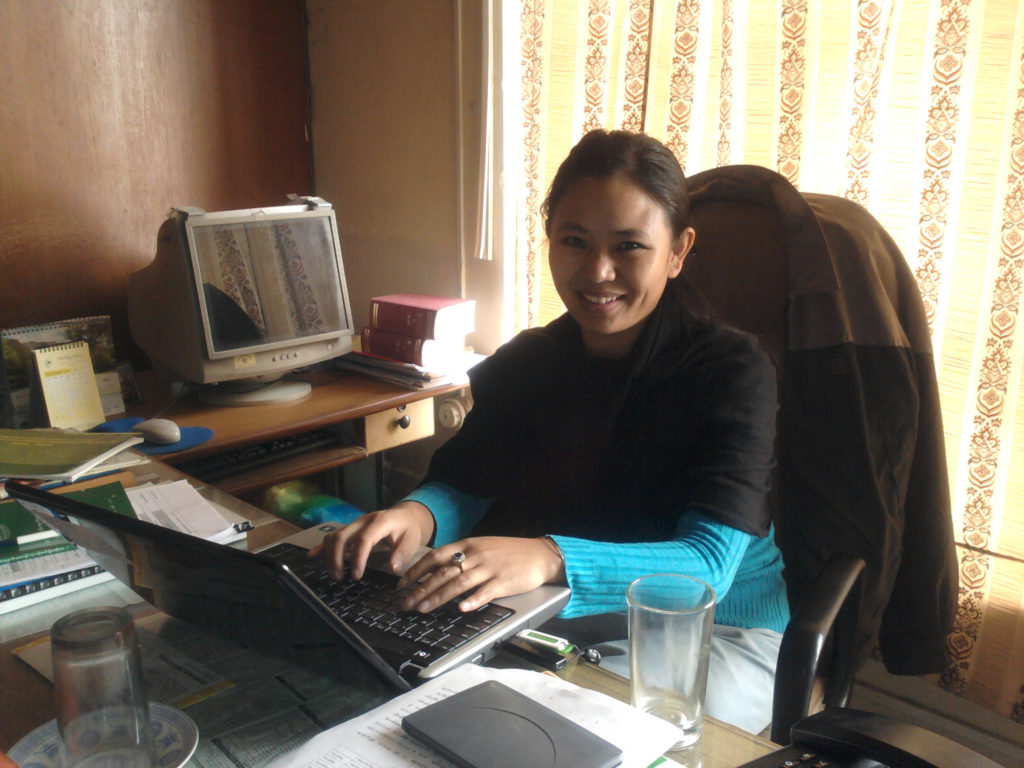 Ms Tenzin Palkyi during her service at the Department of Home, 2012. 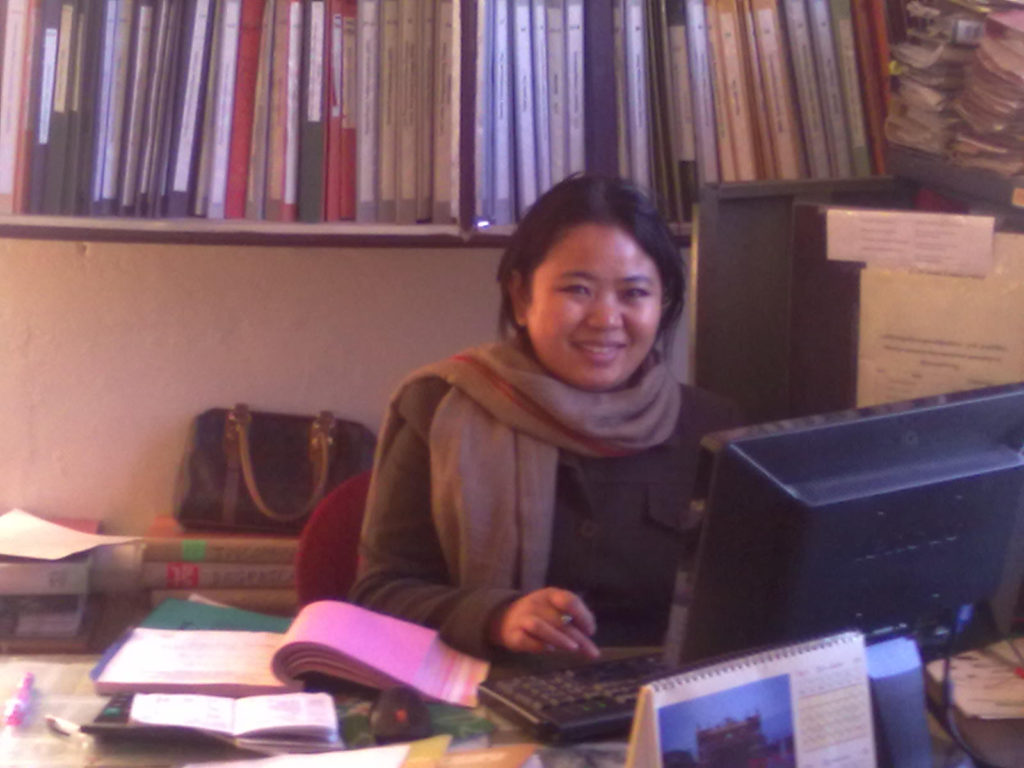