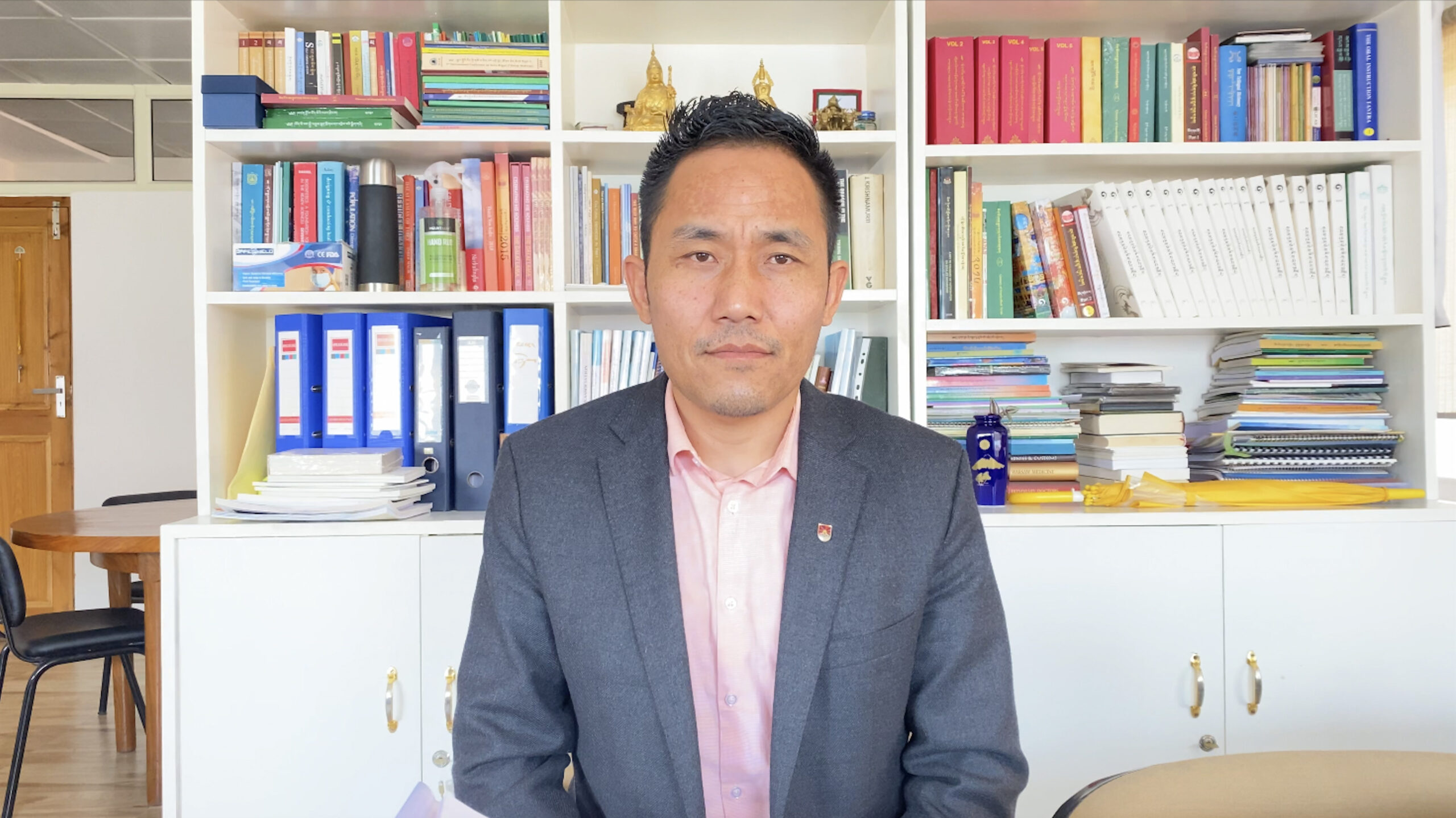 Every first Saturday of the month, as a part of its shout-out campaign, DIIR’s Social Media Desk will be profiling a civil servant of Central Tibetan Administration. This week we are pleased to profile Deputy Secretary Nyima Gyaltsen, Department of Health, CTA.

Nyima Gyaltsen (NG): I was around 11 years old when I escaped from Tibet. It was risky, people were often arrested, tortured and some even died escaping. But my grandmother, who had suffered immensely in forced labor camps in Tibet, insisted that I come to India for better education and to serve His Holiness the Dalai Lama. So, my father sold off our family’s yaks to pay for my escape. While crossing the border, I was hiding under a bus seat tightly clutching the trousers sewn by my mother, especially for the journey. The Chinese soldiers pierced through the gunny bags with bayonets. It was so close. But by the grace of His Holiness and blessings of my elders, I was unharmed. During the journey, I often wondered if it was worth the risk.

On reaching India, I was sent to Tibetan Homes Foundation School in Mussoorie. We had to walk for almost an hour through forests and hillocks to attend classes. During these hikes, I often motivated myself by recalling the purpose of my escape and tried to give my best at school. I was elected as the School Captain and awarded the Best Boy.

Even during my college days, I tried to give my best. I was awarded two gold medals for academic excellence in my masters’ degree. Along with my studies, I also volunteered for community service. I was elected as the President of the Regional Tibetan Freedom Movement in Chandigarh and the President of the Regional Tibetan Youth Congress in Baroda.

After my graduation, I cleared the Central Tibetan Administration (CTA) Public Service Exams in 2011 and since then I have been serving the Tibetan community through CTA.

NG: I am currently serving as the program manager of the Tibetan Medicare System (TMS) under CTA’s Department of Health. It is a community-based health insurance program for Tibetans spread across India. In addition to this, I also manage three other programs: CTA Staff Medicare Service, Essential Drugs Program and the Emergency Medical Relief Fund. In addition to this, I served as a member of the CTA COVID-19 task force since March 2020. I was in charge of four committees under it: Quarantine Centre Management Committee; Nodal Officer Co-ordination Committee; Mass Sanitisation Committee; and Procurement of Personal Protective Equipment Committee.

NG: It is a combination of many personal experiences and my grandmother’s wishes that inspired me to join Central Tibetan Administration. My family had served in the Tibetan government back in Tibet and in exile, my grandfather Rinzin Dorjee la was one of the five founding members of the Tibetan Institute of Performing Arts (TIPA). Also, I had seen the videos of Tibetans protesting in Tibet during 1987-89 and the waves of self-immolation in Tibet had just started when I completed my education. Seeing these, I decided to join CTA to fulfil the wishes of His Holiness the Great 14th Dalai Lama of finding a peaceful solution for Tibet.

NG: In 2012 during the golden jubilee of my alma mater Tibetan Homes school, His Holiness the Great 14th Dalai Lama of Tibet addressed the CTA civil servant alumni and said, “until your foreheads touch the ground, try your best to serve the Tibetan community.” It welled my eyes remembering all the sacrifices he has made for us. Being a CTA civil servant is both a privilege and a responsibility. But most importantly it is a rare opportunity to serve our community in the presence of His Holiness. My service as a CTA civil servant is my service to His Holiness the Dalai Lama and my small tribute to all our older generations who have sacrificed their lives for the Tibetan cause.

NG: During the initial days of my service, I was sent to northeast India as part of the TMS awareness program. It turned out to be quite an adventurous trip escaping from thieves, being chased by thugs, getting stuck in roadblocks and so on. During the last leg of the tour, I had to travel for 12 hours by bus and another 5 hours by the settlement office vehicle. So, I had informed the office driver in advance about my arrival. But on the way, I got stuck in a landslide and was delayed by over 5 hours. I could not even reach the driver over the phone. I assumed he must have left without me. But he was there waiting for me. He could have easily left but he decided to wait because he had utmost dedication to his work. So, I learnt that whatever our job maybe, if we do it with utmost dedication and sincerity, we can make a huge difference to CTA and to our community.

NG: I look up to a few for inspiration. My grandmother for her grit. She was stripped off of everything and was sent to forced labour camps by the Chinese authorities in Tibet but she never broke down and single-handedly raised her six children while my grandfathers were stuck in India. My mother for her love and compassion. We rarely get to talk over the phone but when we do, she hides her pain of separation and tells me that she doesn’t remember me much, just so that I don’t feel too homesick. Finally, my fellow Tibetan brothers and sisters in Tibet for not giving up no matter the huge personal sacrifices.

NG: I recently tested COVID-19 positive. Lying in the hospital bed, I was initially a little anxious but later I felt at peace because looking back at my life, I realised that I had no regrets. I had served my Tsawai Lama (root guru) His Holiness the Great 14th Dalai Lama and the Tibetan community through CTA with utmost sincerity and dedication. I had done everything that I possibly could for the cause of Tibet and if this was the end, I was ready to embrace it. Looking back I also wanted to reassure the fearful 11-year-old boy hiding under the bus seat that the long journey to serve His Holiness the Dalai Lama was worth it. Hence, this would be my appeal to the younger Tibetans: Each one of us is the hopes and aspirations of millions of Tibetans back in Tibet. So, wherever you are remember your roots and try your best to serve His Holiness the Dalai Lama and the Tibetan community. You can serve through CTA or choose your own path to serve with utmost sincerity and dedication and lead a life with no regrets. 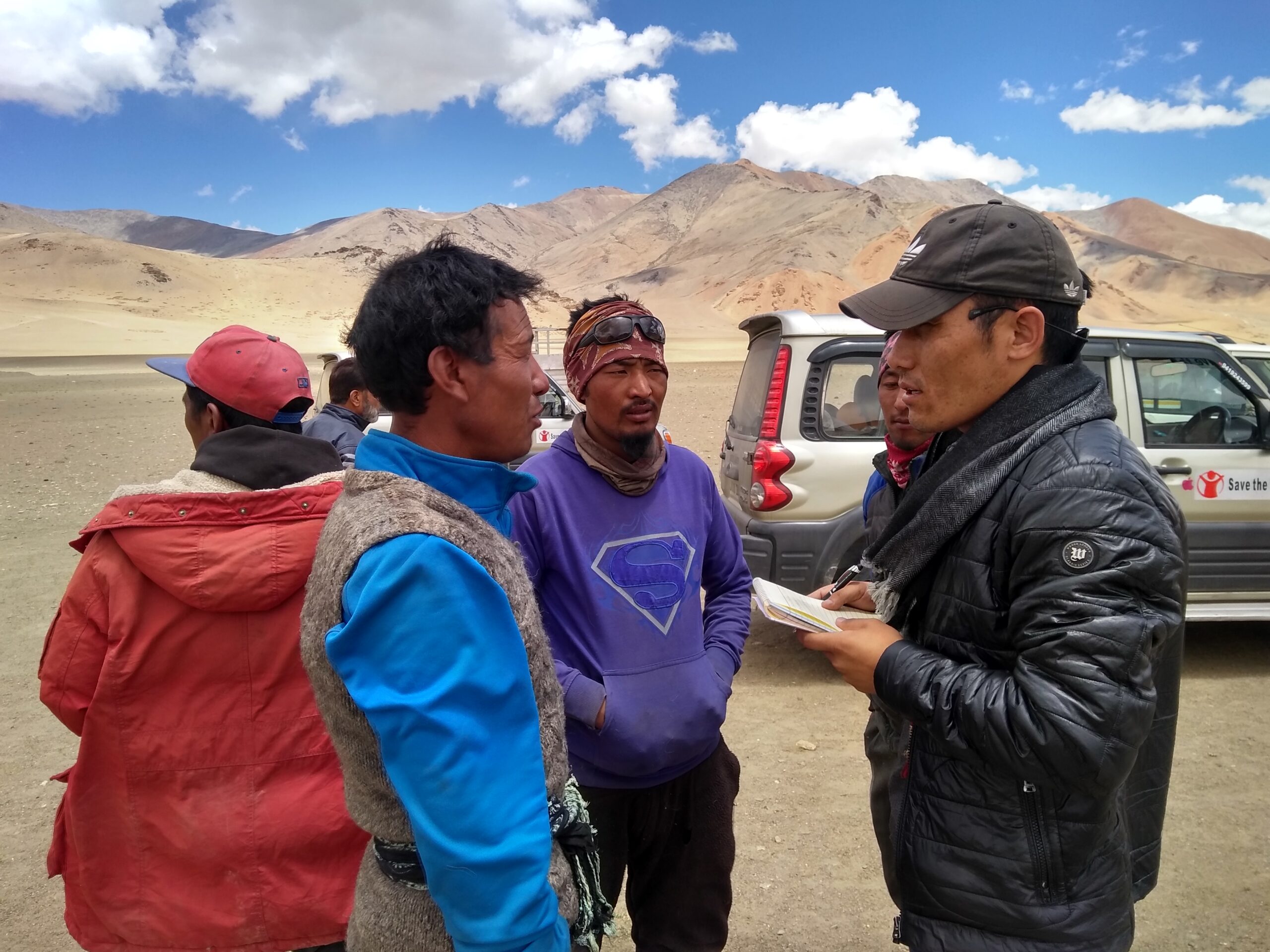 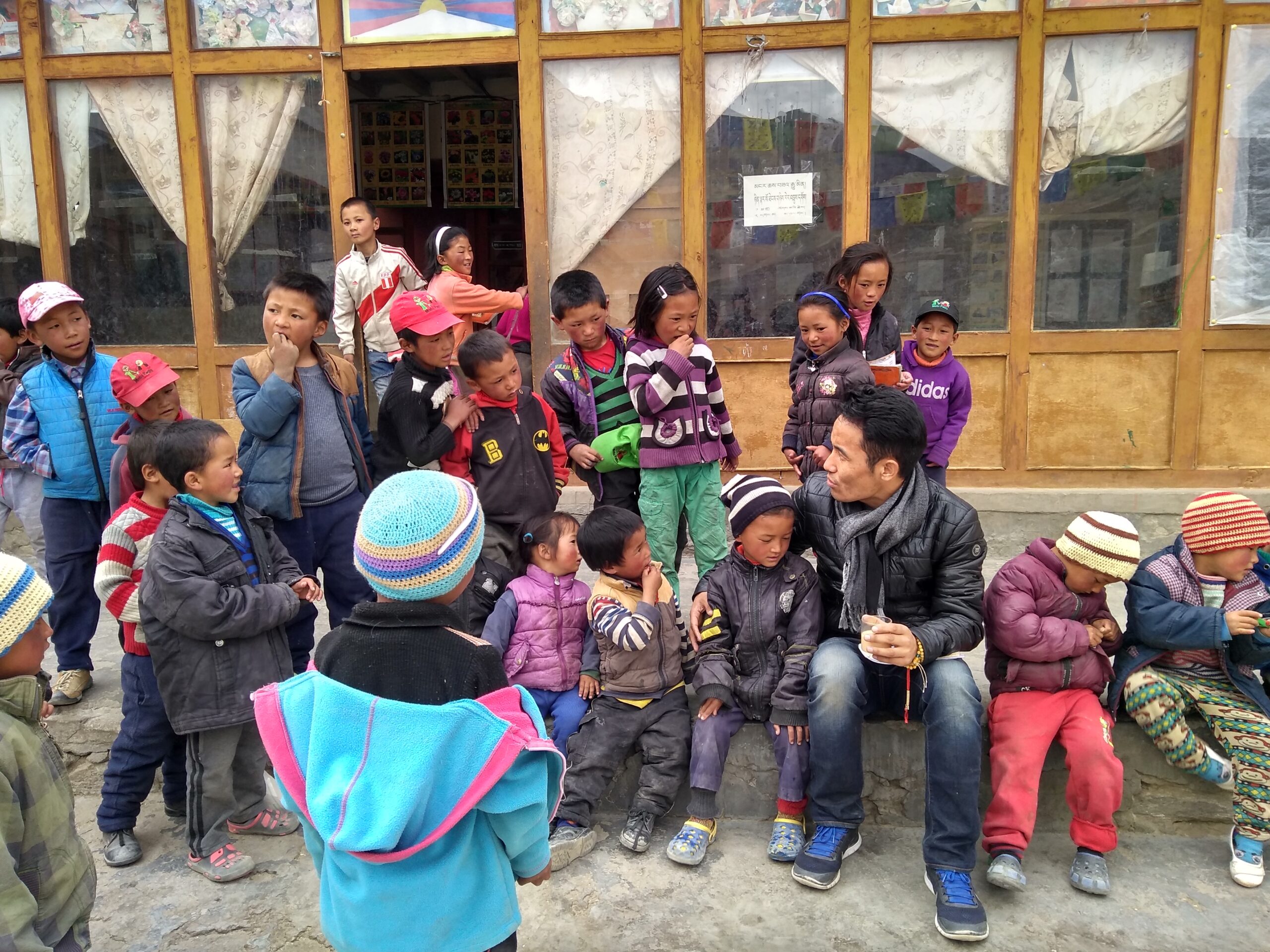 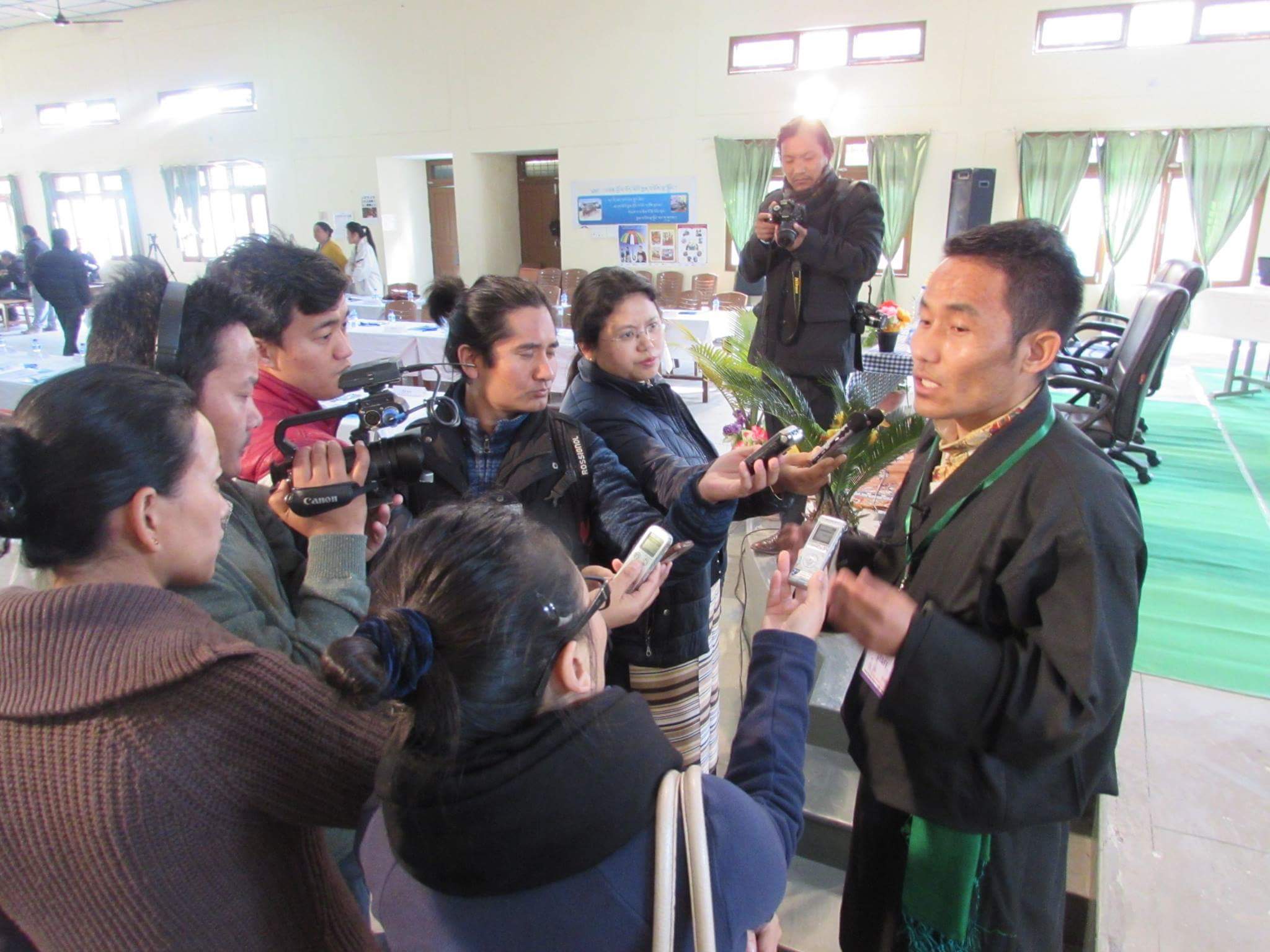 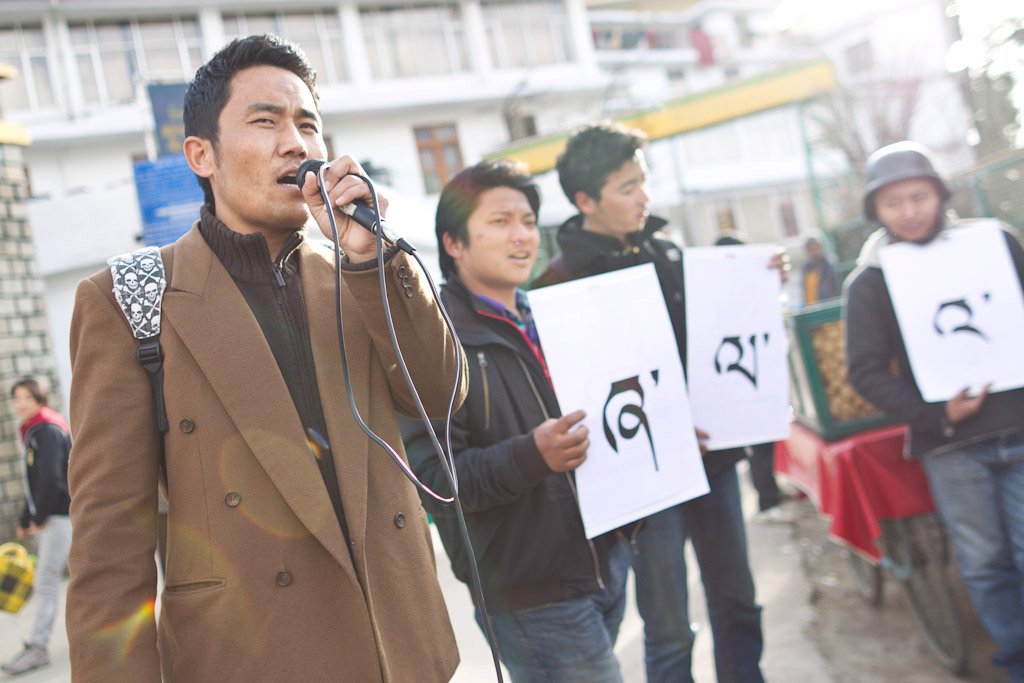 Nyima Gyaltsen taking part in street theatre while volunteering with Students for Free Tibet in Dharamshala. 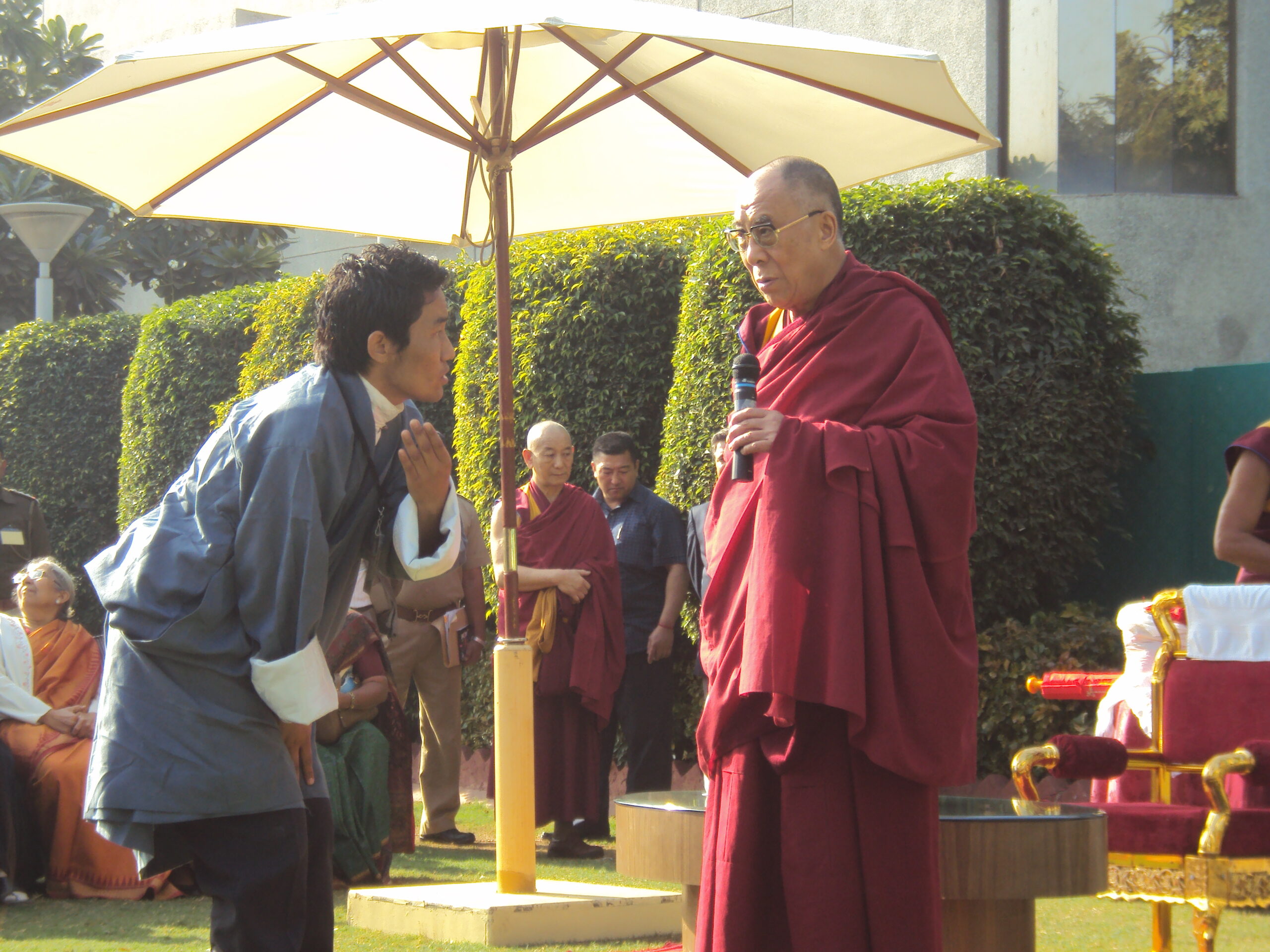 Nyima Gyaltsen, as the president of RTYC Baroda, receives His Holiness the Great 14th Dalai Lama of Tibet, Baroda, Gujarat, 2010. 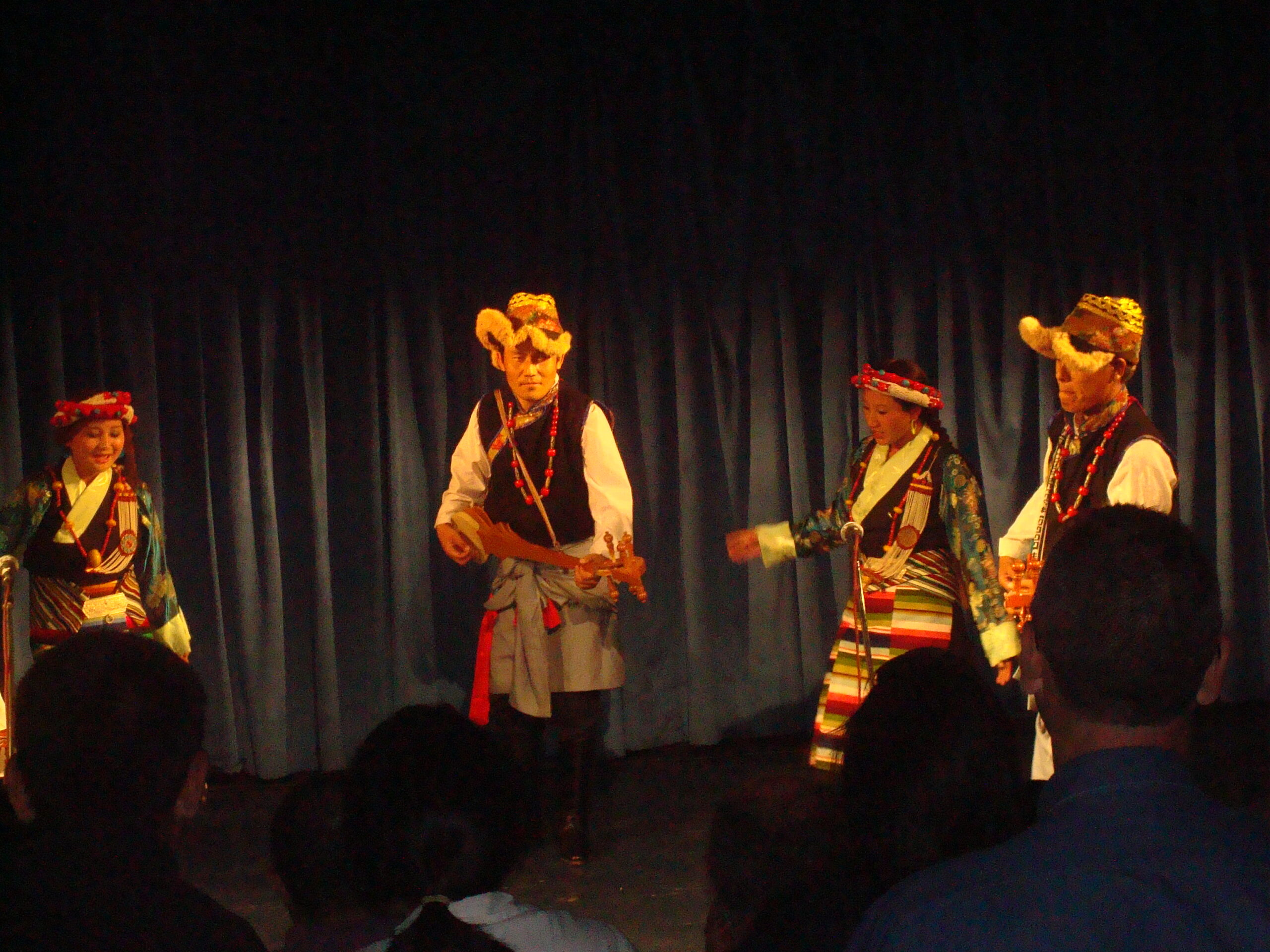 Nyima Gyaltsen taking part in Cultural Program in Italy as part of educational tour in 2009. 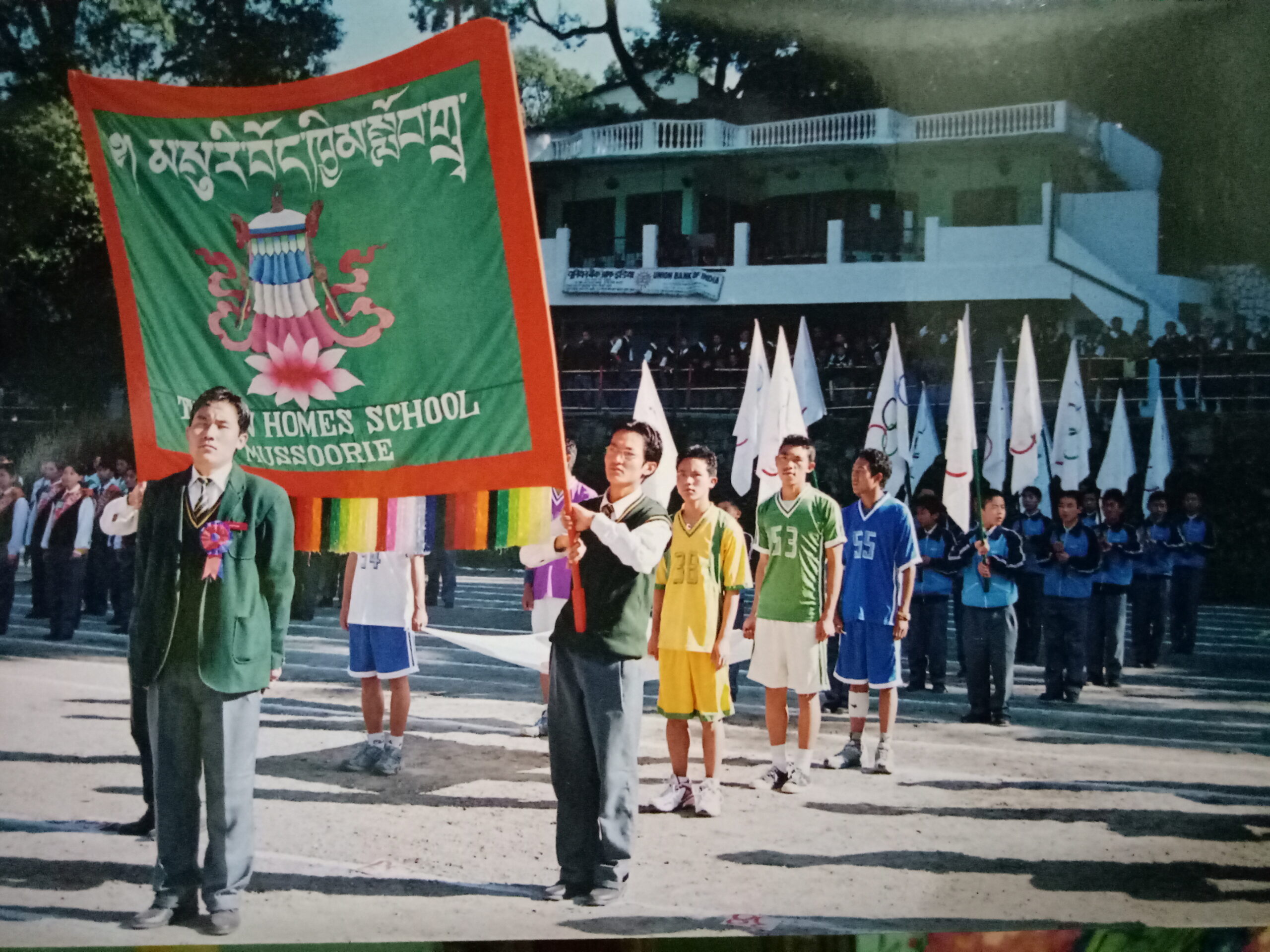 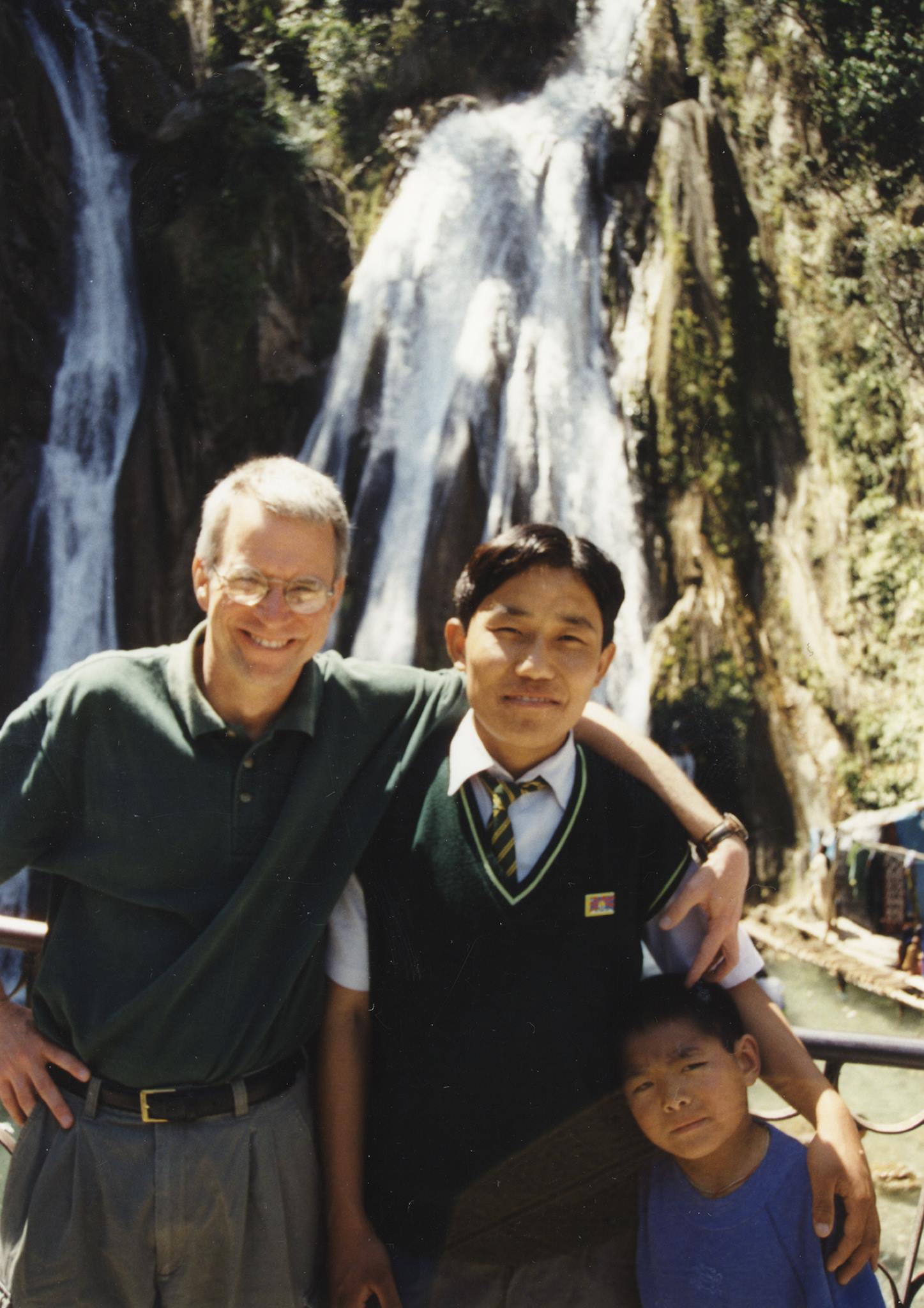