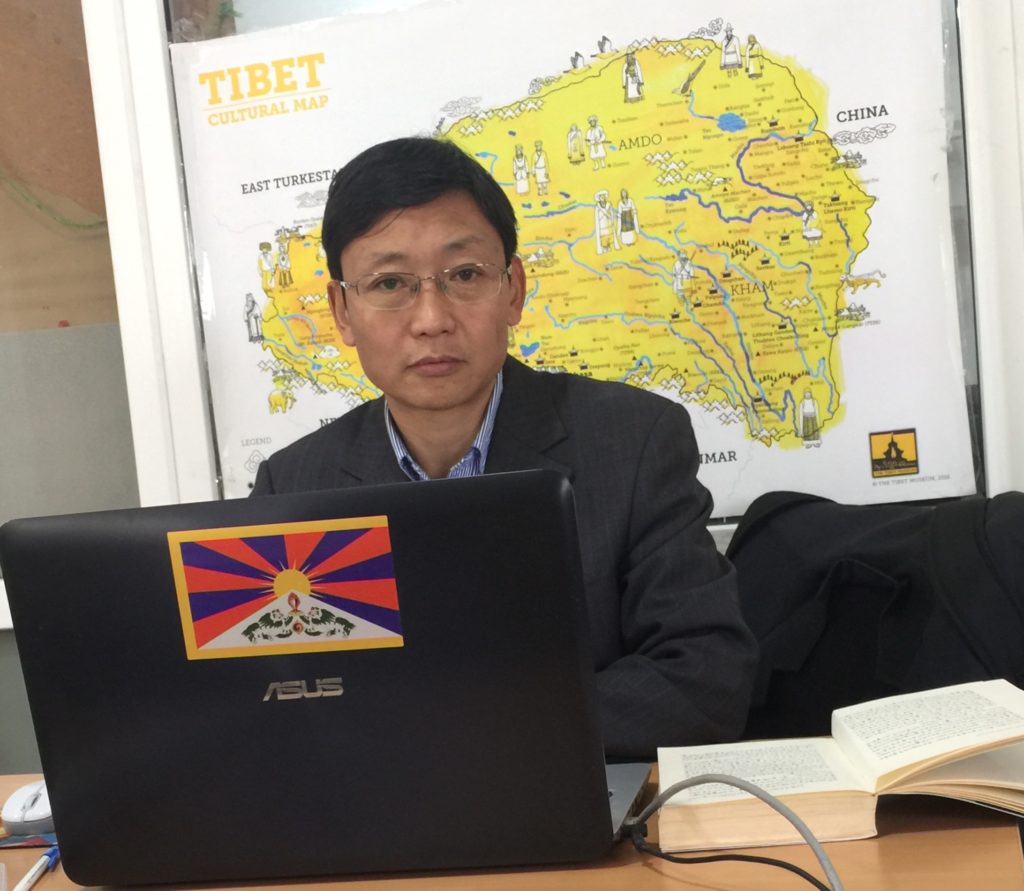 “As we all know CTA is firmly committed to resolving the issue of Tibet through the Middle Way Approach, with my acquired Chinese language skills, I am confident I can be a good value addition to meeting CTA’s mission and goals,” Sonam Dorjee

Sonam Dorjee (SD): My name is Sonam Dorjee. I was born in Lhasa during the Cultural Revolution that took place in Tibet. I did my schooling at the Chinese government-run schools in Tibet. After completing my schooling, I got a teaching job in Lhasa. But somehow the school administration was not fair in the assignment of my tasks and unable to tolerate the injustice, I felt a strong urge to flee to India, into the free world where our root guru His Holiness the Dalai Lama and the Central Tibetan Administration (CTA) is based at. Sensing injustice and lack of freedom in Tibet, and with a conviction to embrace freedom and justice, I escaped to India in November 1992. I reached Dharamshala in December 1992.

SD: When I was in Tibet I always wanted to be a Tibetan language teacher. In fact, after coming into exile, I applied for a teaching post at Upper TCV School and Tibetan Homes Foundation, Mussoorie at the same time. However, around that time of the year, the Tibetan government in exile (now called CTA) was recruiting staff with Chinese language skills. With my friend’s suggestion, I applied and sat for the entrance tests. In the meanwhile, I rendered my service as a Tibetan teacher at Upper TCV School for six months until I was informed of my selection at CTA. With the guidance and advice from CTA senior staff, I joined the CTA workforce as an Under Secretary at Public Service Commission in June 1993. Later, I was promoted to the post of Deputy Secretary. In the year 1997, His Holiness the Dalai Lama made a historic maiden visit to Taiwan. In the following year, Office of Tibet (OoT) based in Taiwan was established. Under OoT-Taiwan’s initiative, for the first time, four seats were announced for an educational scholarship in Taiwan. Three CTA staff (including me) and staff from the Library of Tibetan Work and Archives got selected. I studied Political Science for two years. Upon graduation, I continued my service at the Public Service Commission. In August 2002, I was promoted to the Joint Secretary rank and subsequently transferred to Office of Tibet-Taiwan. My responsibilities at the OoT-Taiwan were to liaise with Taiwanese government officials, to carry out Tibet awareness program at universities and schools, to prepare documents for the important official meetings, to look after the welfare of Tibetans in Taiwan. In 2010, OoT-Taiwan established ‘Gangjhong Publishing House’ with the sole purpose to disseminate information on Tibet and news of political relevance to a wider audience in Taiwan and Hong Kong. Since it is expensive to hire staff for book publishing work, OoT-Taiwan staffs themselves learned the craft of book designing and publishing. Till date, we managed to publish 30 books related to the Tibetan political issue. In July 2014, my service tenure at OoT-Taiwan ended as per Public Service Commission rules. Upon my return to Dharamshala, I was appointed the Director of Chinese Section at Department of Information and International Relations. For about two years, I rendered my service at the best of my capacity. For two years, I took a sabbatical leave. And then in August 2018, I rejoined my service at DIIR and got promoted to the post of Additional Secretary in October 2018.  Likewise, I got transferred to OoT-Taiwan.

SD: As you see I was born and brought up in Tibet. I felt the void of transparency in Tibet under the Chinese rule. Being a Tibetan teacher in Tibet was very difficult, as we don’t have freedom of thought, and always being watched! In exile, although professionally I could not become a teacher as I initially planned to, there is a sense of gratitude of having learned many new things from CTA senior staff and that I am in a position to empower the younger staff with my experience and knowledge.

SME: What does it mean for you to be a CTA Civil Servant?

SD: As a CTA civil servant, I am both inspired and motived to serve CTA, as I firmly believe I am adding on to my good karma. If I may share with you an anecdote: 10 years ago, Tibetans from Tibet who were on a pilgrimage to Dharamsala were invited by few CTA staff to have lunch at CTA staff mess. After having their lunch, their eyes were filled with tears of joy as they felt fortunate to have lunch at CTA, at the institution who work for the cause of Tibet. In another instance, an abbot of a monastery once told me how as a robed monk with Geshe degree, he feels small in front of a CTA civil servant serving at the institution with a history dating back to the time of the 5th Dalai Lama. Such respect for CTA staff make me feel humbled and determine to work harder for the cause of Tibet.

SD: As we all know CTA is firmly committed to resolving the issue of Tibet through the Middle Way Approach, with my acquired Chinese language skills, I am confident I can be a good value addition to meeting CTA’s mission and goals.

SD: I draw inspiration from the stories of resilience CTA staff who persevered despite all odds in the early years of exile history.  During my tenure at the Public Service Commission, I imparted training programs to CTA’s fresh recruits and narrated the stories of early years of struggle and hardship; even Kalons were put up at cattle shed to fill in as staff quarters.

SD: When I began to serve at CTA, the facilities and infrastructure were far better than what at the disposal of senior staff. But today, they have improved manifold and therefore I would like to urge the incumbent workforce to serve CTA to the best of their ability, with a blend of modern education and Tibetan moral values.

Every first Saturday of the month, as a part of its shout-out campaign, DIIR’s Social Media Desk will be profiling a civil servant of Central Tibetan Administration. This week we are pleased to profile Sonam Dorjee, Additional Secretary at the Office of Tibet-Taiwan. 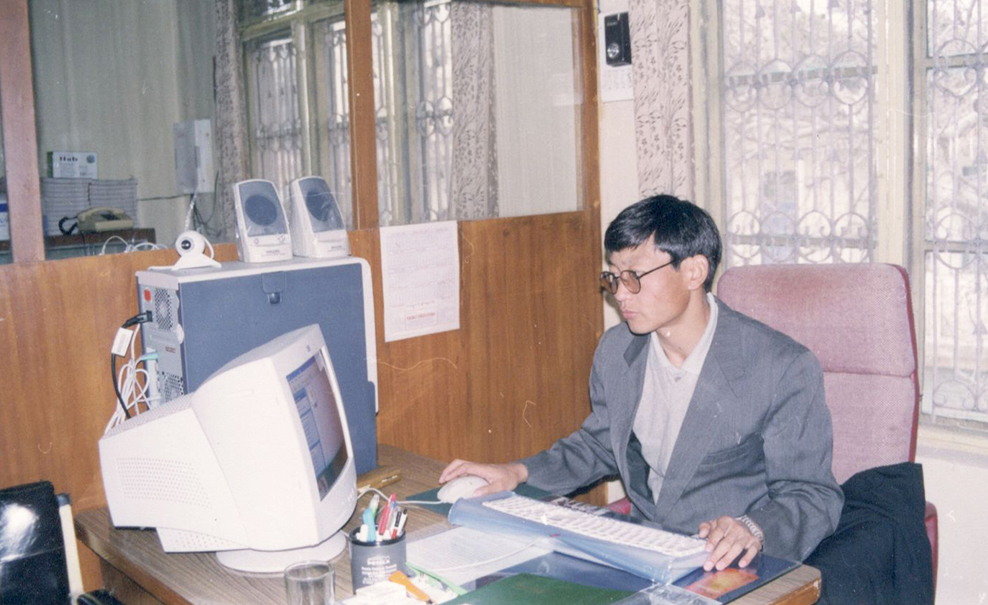 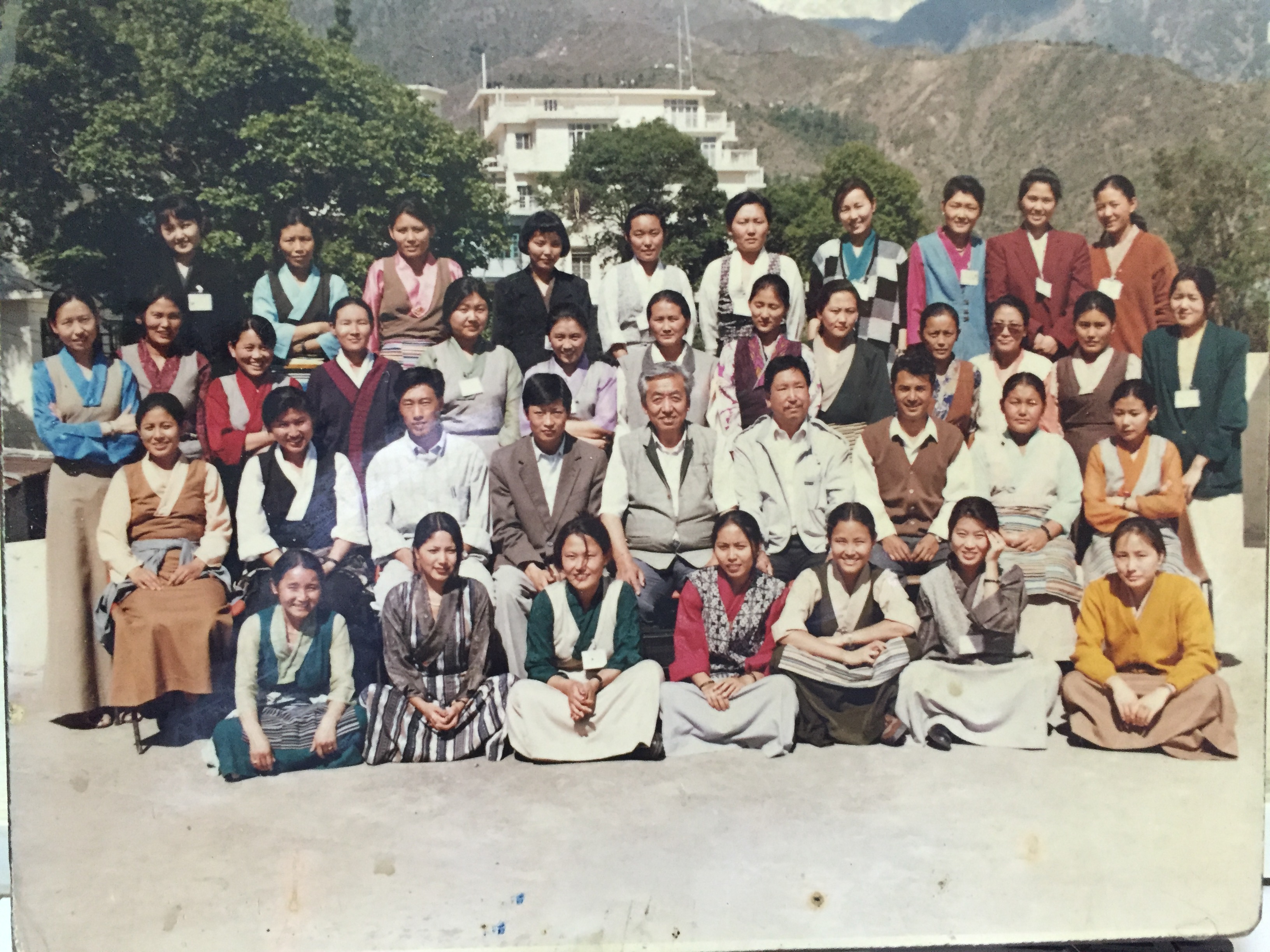 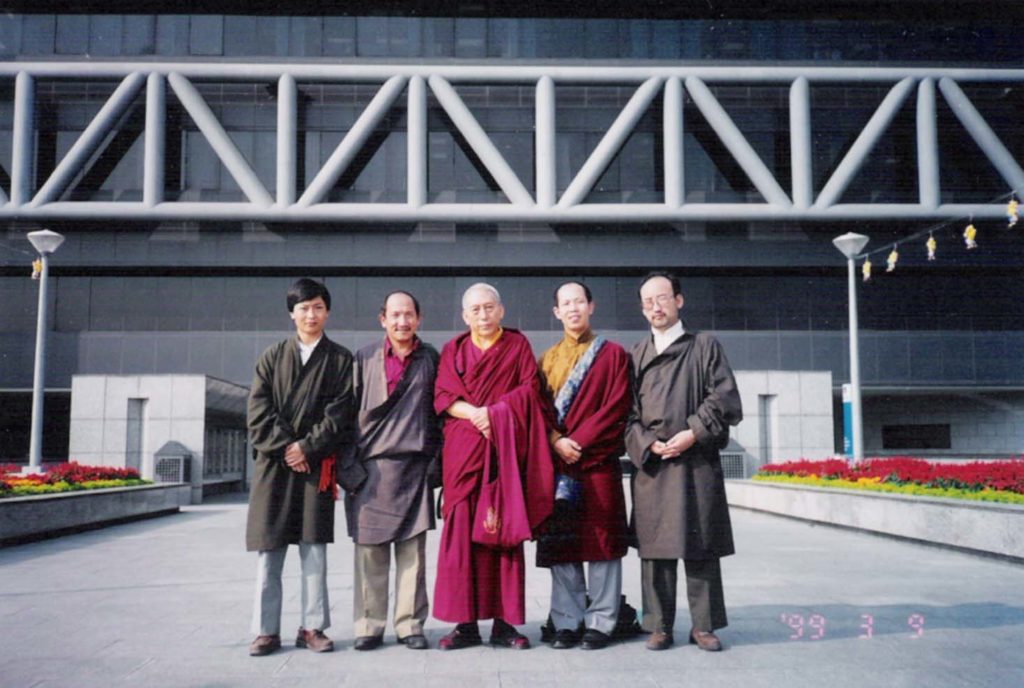 Sonam Dorjee along with Professor Samdhong Rinpoche and three other recipients of the Taiwan Scholarship, the then Speaker of Tibetan Parliament in Exile in Taiwan, 1999 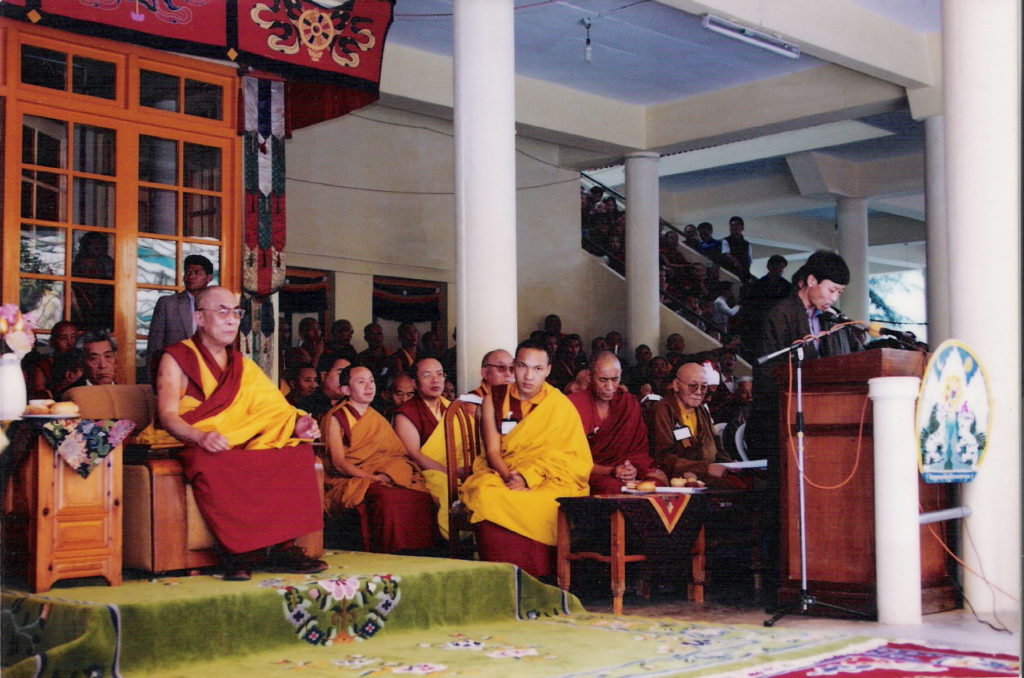 Sonam Dorjee speaking at the celebration of 360th anniversary of Gaden Phodrang, Tsuglakhang, 15 May 2003 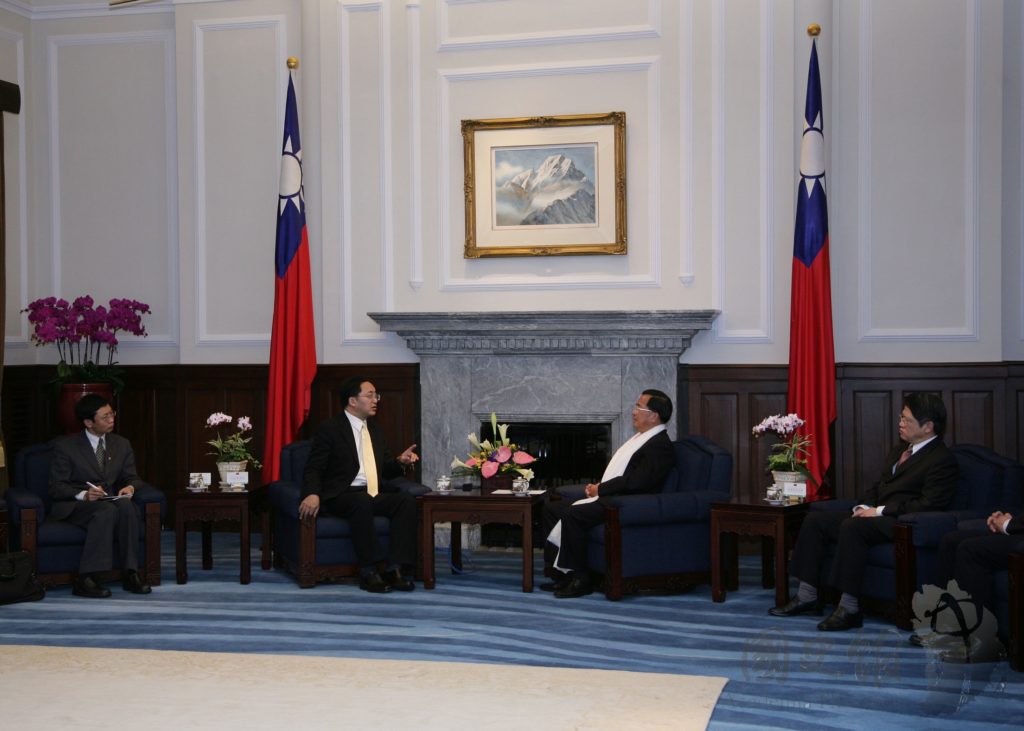 Sonam Dorjee at a meeting of former Representatives of Office of Tibet-Taiwan, Ngaba Tsegyam with President of Taiwan Chen Shui Bian in Taipei, 2006 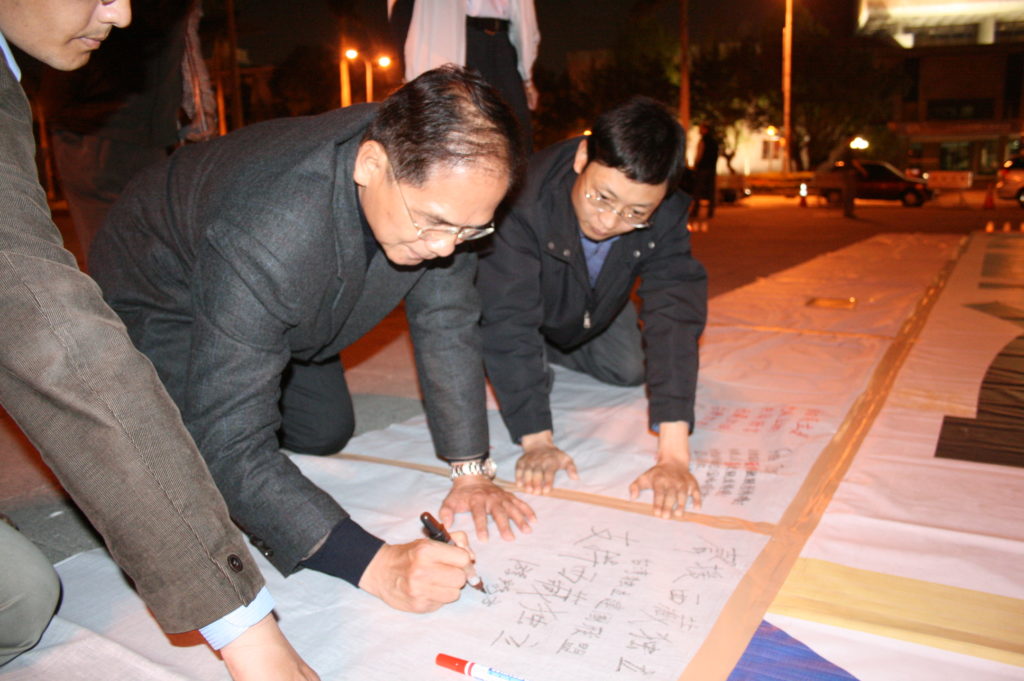 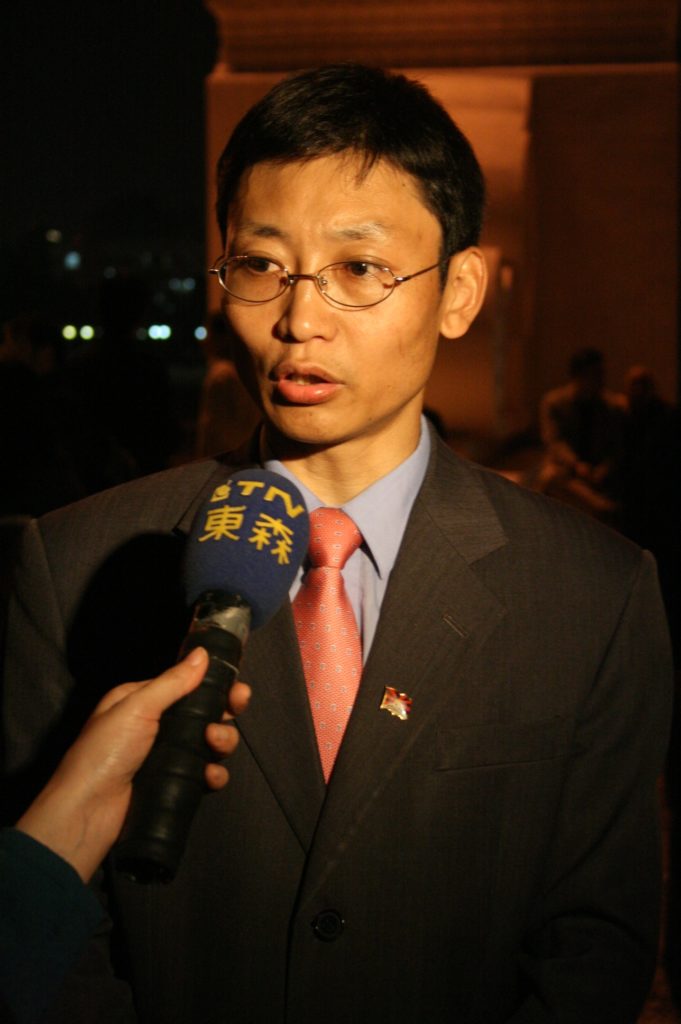 Sonam Dorjee, a representative of Office of Tibet-Taiwan, addressing the press, 2008 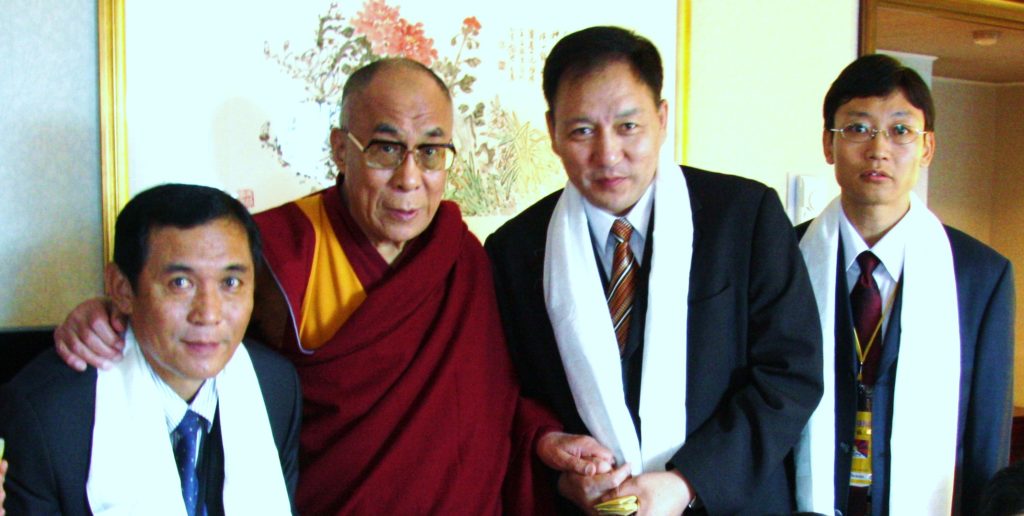 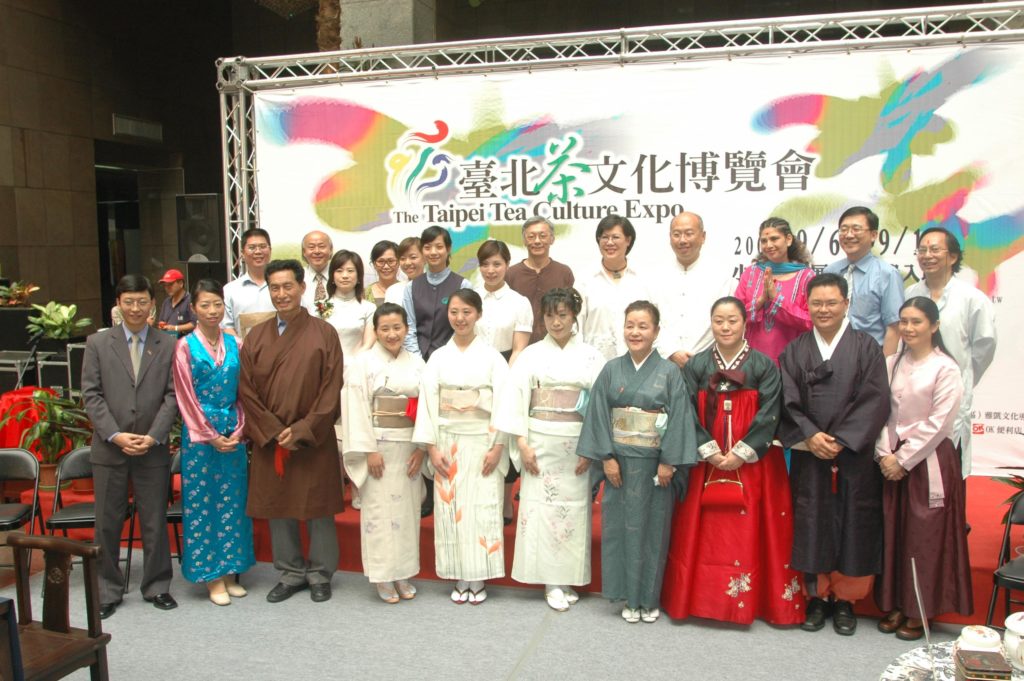 Sonam Dorjee participating in the Taipei Tea Culture Expo in 2009 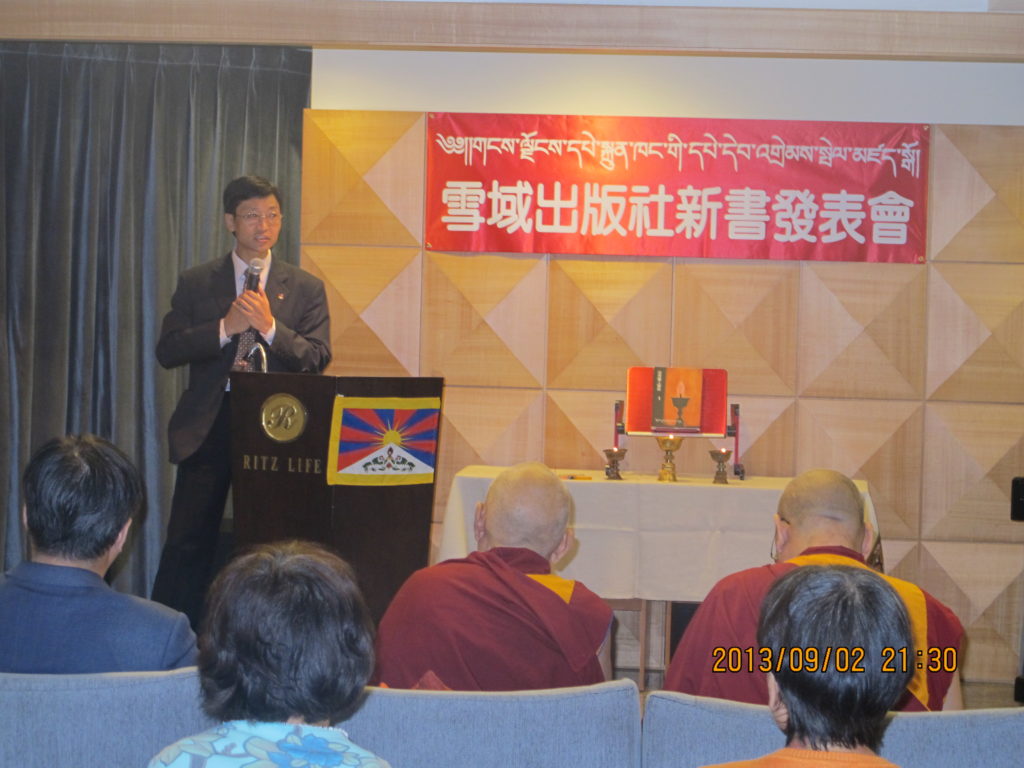 Sonam Dorjee speaking at the launch of Gangjong PublicationHouse in 2013 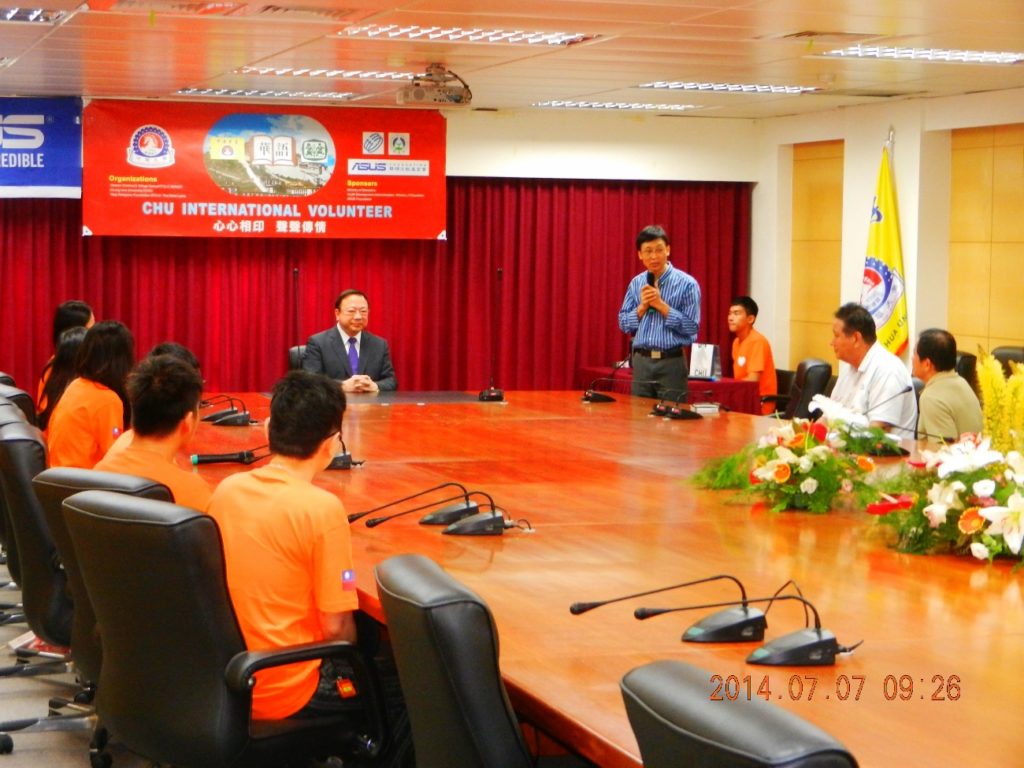 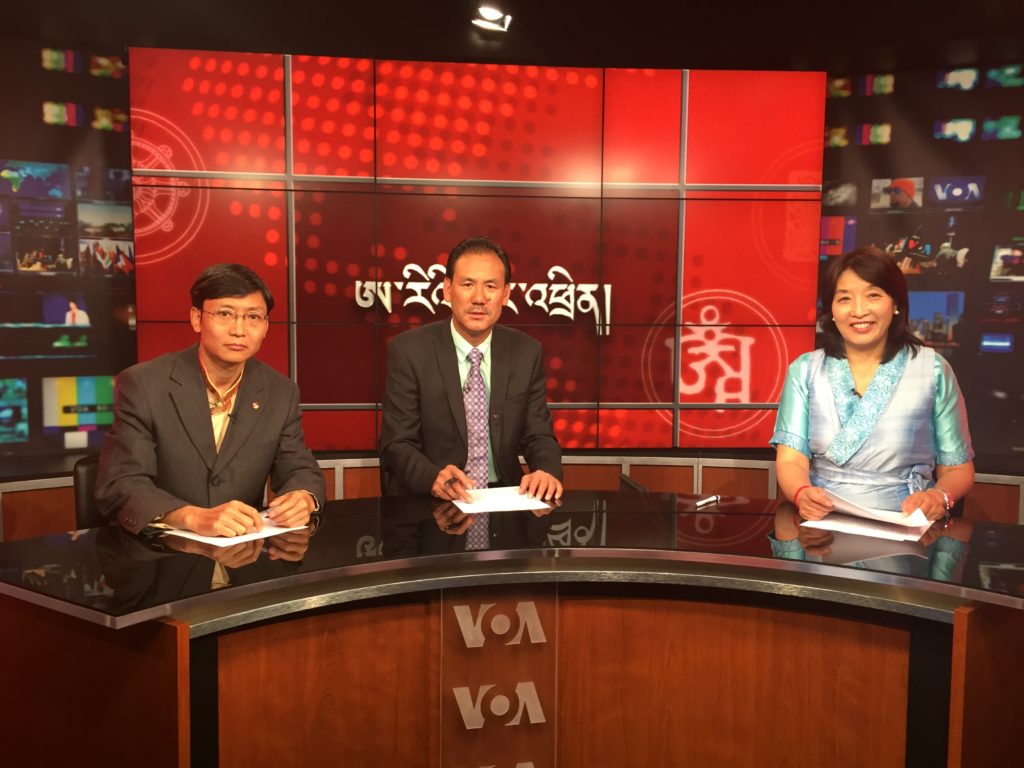 Sonam Dorjee as a Director of Chinese Section, DIIR, appearing for VOA-Tibetan interview in Washington DC 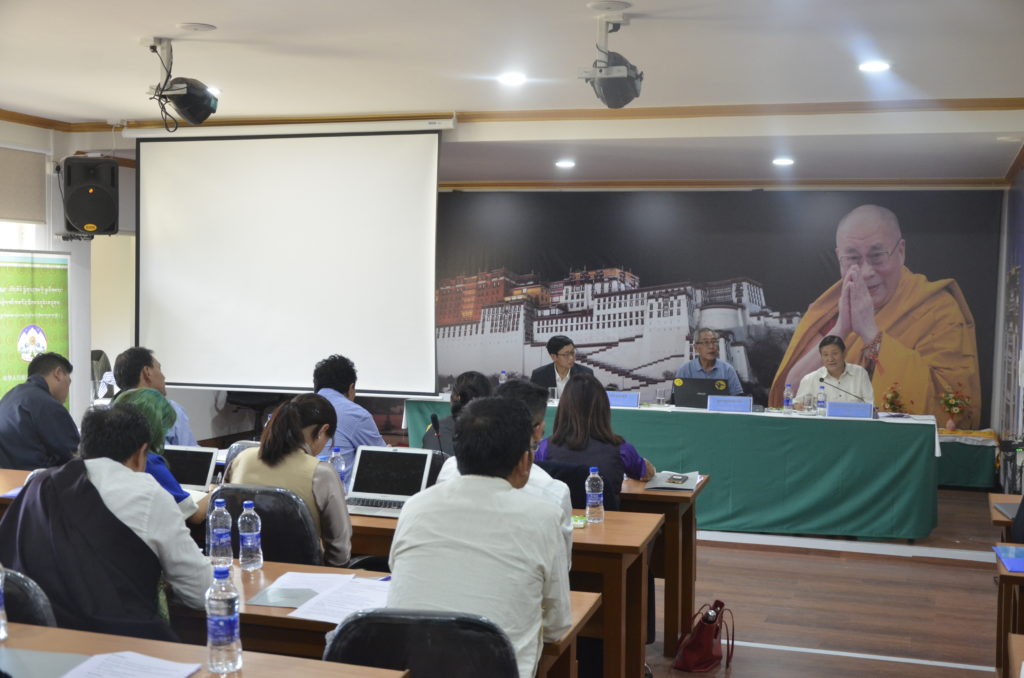 Sonam Dorjee at the Chinese Outreach Forum and Training organized by DIIR, October 2018