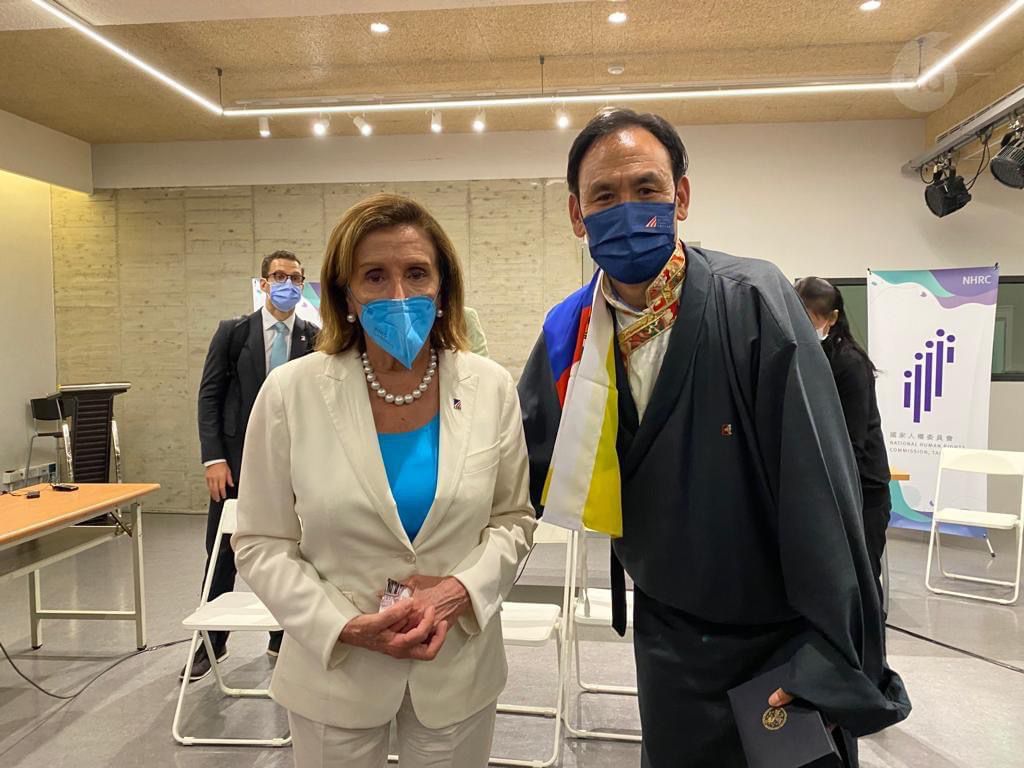 Representative Kelsang Gyaltsen Bawa with the US House Speaker Nancy Pelosi during the latter’s visit to Taiwan, 3 August 2022.

Taiwan: Despite drawing much criticism and threat from Beijing, US House Speaker Nancy Pelosi-led delegation of five Democratic lawmakers visited Taiwan on Tuesday, 2 August becoming the highest ranking US official to visit the country since 1997.

On the eve of her departure from Taiwan on August 3, Speaker Pelosi met with seven human rights activists at the National Museum of Human Rights in Taiwan, including pro-democracy activist Wuer Kaixi, Taiwanese human rights activist Mr. Li Mingzhe, who has been persecuted by China, Mr. Lin Rongji of Causeway Bay Bookstore in Hong Kong, and Mr. Kelsang Gyaltsen, Representative of Office of Tibet in Taiwan where they engaged in an hour-long roundtable discussion on varying subjects involving democracy and human rights.

Representative Kelsang Gyaltsen addressed Speaker Pelosi on the deteriorating human rights situation in Tibet and the increasingly extreme policy of ethnic, religious and cultural genocide in Tibet by the CCP. He also apprised her of CCP’s so-called boarding schools technique as bait to coerce Tibetan children to study in boarding schools away from their parents, thus achieving the assimilation of Tibetan culture and religion, among other issues. He also called on joint organisers of global democracy meeting to be held in October to invite H.H. the Dalai Lama to the conference, stating it would send a clear and strong message to the CCP of the global solidarity to Tibet.

“Current CCP’s chairperson Xi Jinping’s approach to Tibet, the so-called “The Party’s New Generation Policy on the Governance of Tibet” focuses on the annihilation and assimilation of the Tibetan people, as well as eliminating the Dalai Lama’s influence in Tibet. These measures have stirred up even stronger resistance from the Tibetans,” said the Representative of His Holiness the Dalai Lama in Taiwan remarking that Tibet has now become a ‘giant prison’.

He further attested that the decades-long genocide in Tibet should continue to receive much attention and support even though the world now is gripped by the Ukraine crisis. Lamenting the initial lack of support and attention from the international community when Tibet was being occupied, Representative mentioned things could have been different had China received the same pressure as Russia does now from the international community. As much criticism as Russia received for its presence in the UN’s Human Rights Council, Representative added China also deserves to be ridiculed and criticised for its presence in the UN and other international organisations considering its depreciating record of human rights violations.

“No one can be certain that the tragedy that befallen Ukraine would not happen to Taiwan, a free, democratic, and robust country. Only when China transforms itself into a full-fledged democracy, can we truly eliminate the CCP’s destruction and threat to Taiwan and to the rest of the world?” he added.

In his concluding address, Representative Bawa thanked the continuous support of countries such as India, US, European countries and Taiwan, and requested Speaker Pelosi and the US government to pressure CCP into a dialogue with the Central Tibetan Administration (CTA).