Rage at an elite that has stolen China’s soul 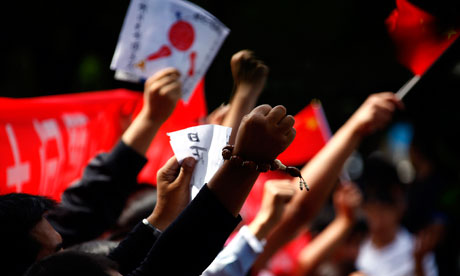 Demonstrators outside the Japanese embassy in Beijing as the row over the Senkaku islands, known as Diaoyu in China, escalates. Photograph: David Gray/Reuters

By Lin Chun / The Guardian

The 36th anniversary of Mao’s death, a little over a week ago, was met by official silence – but spontaneous commemorations across China, including a long queue outside the Mao Memorial Hall in Tiananmen Square.

The next day, Wen Jiabao, the premier, spoke at a ceremony to unveil statues of Zhou Enlai, the first premier of the People’s Republic, and Chen Yi, who took over as foreign minister from Zhou. He said: “Old China was totally humiliated, its territories were fragmented … The older generation of revolutionaries like Mao Zedong, Zhou Enlai and Chen Yi founded the People’s Republic and ended a hundred years of humiliation in our recent national history, laying the foundation of new China’s foreign relations. We must for ever remember their magnificent achievements, and study, carry on and develop their intellectual and spiritual qualities”.

The day after that speech the Japanese government signed a deal to begin to “nationalise” the Senkaku islands, known as Diaoyu in China. The Chinese government strongly objected, and sent surveillance ships to the disputed waters. Popular feelings also ran high: anti-Japan demonstrations have spread across China, including Hong Kong. Taiwan’s veteran “defending Diaoyu movement” has been boosted by implicit official support. Larger mass rallies could occur on Tuesday, the anniversary of the 1931 Japanese invasion in northern China.

However, interpreting Wen’s words and the mass protests in China’s streets as simply nationalistic would miss the point. Rather, as the leaders well know, accumulated social discontent with a regime seen by many as externally weak and internally corrupt has found expression in maritime disputes between China and its neighbours. Some of the signs used in the anti-Japan demonstrations address domestic policies: there were even a few forbidden ones, with reference to the crushed Chongqing model. Many protesters carry Mao’s portrait. Voices from the top and bottom of Chinese society have coincided here to call for a return to common sense.

Wen, by reputation the most “liberal” among the party’s political factions, was speaking about the need to honour modern China’s roots in the epic liberation struggle of the Chinese people. In the eyes of ordinary Chinese, the People’s Republic has moved far from its founding promises of popular power and wellbeing, “rising” through hyper-growth, frenzied urbanisation and single-minded global integration, with grave moral, social and environmental costs: losing its soul while expanding economically.

Continuities and ruptures are both evident in a comparison of the Maoist and post-Mao eras. Deng Xiaoping, who belonged to the first communist generation, led China’s market transition immediately after the cultural revolution. The 1980s saw general living standards rise and 400 million peasants lifted out of poverty. Despite such pragmatic slogans as “getting rich first”, Deng warned against the danger of income polarisation:

“If we allow the millionaires to emerge one day, our reform project would fail.”

Yet, by a powerful market logic, and in the absence of determined political intervention, China did produce millionaires and later even billionaires. It became one of the world’s most unequal societies. Hu Yaobang and Zhao Ziyang, handpicked by Deng as successive party general secretaries, loyally carried out the Dengist programme of “reform and opening”. They were still idealistic communists in their respective ways and did not survive the events around the upheavals in Tiananmen Square in 1989. However, many subsequent policies, such as the integration of coastal China into the global economy and export-led growth, were set in motion.

Instead of tackling the urgent problems of corruption and rising social insecurity that contributed to the Tiananmen upheavals, the Jiang Zemin–Zhu Rongji leadership selected by Deng radicalised an initially socialist reform of self-adjustment. After the post-1992 resumption of “development as the absolute principle” (Deng), they pushed for industrial privatisation, introduced stock and real estate markets, and negotiated China’s accession into the World Trade Organisation with excessive concessions. Jiang also paved the way for the Communist party to change colour. As 40 million urban workers were laid off and rural communal management collapsed, the second reform phase turned out to be an all-out neoliberal adventure.

Since then the astonishing wealth and lifestyles of some cadres and families have become common knowledge. Officials keeping overseas bank accounts, or fleeing the country with bags of cash, fuelled popular indignation and political cynicism.

It was hoped that Hu Jintao, the president, and Wen – appointed with Deng’s approval – would clean up the mess. They proposed a “scientific conception of development” and a platform of people-first social policies, removing agricultural taxes and school fees for compulsory education, and working on rebuilding public medicine and social security. However, they also forced property laws on the legislature to legitimise privatisation, and stuck to a GDP-centered strategy. China is trapped in the developmentalist predicament of exploitative cheap labour, undue energy consumption, heavy pollution and foreign trade dependency. With an excess surplus capital, China’s outgoing investments have also run into difficulties and tensions abroad.

During Hu and Wen’s tenure – like that of their reformist predecessors – market supremacy has relied on state sponsorship or imposition, at times violently. Senseless commercialisation in Tibet and Xinjiang, with intended and unintended social, cultural and demographic consequences, caused deadly clashes.

With hopes for the third “reform decade” dashed, China’s vulnerable feel the pain: the land-losing peasants; the struggling migrants and the children and elderly and sick people they left behind; and, in the end, angry strikers, petitioners and protesters. As the economy falls into a slump, the government seems to have followed every step of recent World Bank recommendations. In this month’s Apec summit, Hu reaffirmed China’s commitment to further trade and financial liberalisation.

China’s post-Deng power transitions have so far been largely smooth. The processes have been modernised, with more extensive voting opportunities and consultation. The leaders at all levels have become younger and better educated, but the system still hinders able, independent candidates, and tends to promote the mediocre and obedient.

Due to the fall of Bo Xilai in the Chongqing crisis, we already know that there will be no seamless power transition this year. The unexplained absence of Xi Jinping only added to the uncertainty. The total secrecy of politics at the top hurts the system itself by showing its lack of self-confidence and a deep distrust of citizens. This will have to be addressed by the new leaders.

As things stand, it is difficult to anticipate any decisive change in China’s political economy. Yet there are multiple factors at work: the logic of the market and the logic of bureaucracy – but ultimately also the logic of politics. Xi and Li Keqiang, the assigned premier, have been appointed through rounds of internal elections and negotiations. They should be aware of popular demands, and social movements, and become committed to political transparency and, indeed, democracy.

And we may also expect them to tackle corruption, so as to rescue the regime for their own survival. They could begin with publicising the earnings and family incomes of national leaders and highly placed officials. They need also to revert to the minimal communist ethic of serving the people.

• This article was amended at 10.30pm (UK time) on 17 September, after a partially edited version was published in error