Dharamshala: CTA President Dr Lobsang Sangay gave a press briefing this afternoon on the latest measures rolled out by the Central Tibetan Administration to effectively curb the spread of the coronavirus.

In addition to the guidelines issued by CTA in Tibetan monasteries, schools and elder care homes in India, Nepal and Bhutan, as well as for CTA workforce at Central and Regional offices, the President today announced a set of stringent instructions and health reminders for the public.

Firstly, he advised all Tibetans in India to refrain from travelling within or across the states especially in Himachal Pradesh where the lockdown is in effect. All the Tibetans across India are urged to abide by the instructions issued by the respective state governments.

“All Tibetans who are seeking to enter Himachal Pradesh from other states or countries must be informed that the Government of Himachal Pradesh has already sealed the borders in order to contain the spread of the COVID-19 disease and any inter-state or intra-state movements are strictly prohibited,” said the President.

“Any person found violating this order shall be punished as per the relevant provisions under the law.”

Secondly, as part of the Central Government’s social distancing measures, President Sangay announced that work-from-home mandate has been put in effect at the CTA headquarters.

This new measure follows the guidance issued by the Ministry of Personnel and Public Grievances, Government of India and of the HP Govt that “50 percent of Group B and Group C employees are required to attend office every day, and the remaining 50 percent of staff should be instructed to work from home. Working hours of the employees should be altered. Central government officials, who will be working from home on a particular day as per the roster drawn up, should be available on telephone and electronic means of communications at all times. They should attend office if called for any exigency work”.

Thirdly, the President said Tibetans in and around Dharamshala who are seeking to approach the CTA headquarters with any concerns must do so through call or email. With the lockdown in effect, all the Tibetans are asked to avoid physical contacts and appearances at the CTA headquarters unless absolutely necessary.

The public is encouraged to communicate their concerns via telephone, emails and a complete contact directory of the CTA offices is provided here to facilitate a hassle-free communication.

Addressing the public confusion regarding the lockdown in Kangra and whether or not it implies to a complete closure, President Sangay clarified that government offices at both central and district are operating at 50 percent staff capacity under the new work-from-home guideline.

“The offices of CTA will also operate under the same guidelines until further instructions,” he said.

However, he made clear that public places will remain closed and inter-state and intrastate movements will remain suspended as per the State government’s instructions, adding that any person found violating this order shall be punished as per the relevant provisions under the law.

On a more worrying note, the President said there have been found two confirmed cases of COVID-19 infections in Kangra and alerted the Tibetan community to take utmost precautions and observe strict social distancing and isolation until the pandemic spread is contained.

“We’ve all seen the horrendous situation in Italy. 7 weeks ago, the number of positive cases was at 3, as of now, there are 60,000 infected people and more than 5000 casualties.”

“Preventing the spread of coronavirus is a matter of social responsibility that falls upon each one of us,” he said. “Take it seriously because it’s absolutely crucial.”

India as the world’s second-most populous nation has so far avoided the worst of the coronavirus pandemic, with its community transmission still at a lower rate, and most affected cases found to have carried the infection from affected countries.

However, over the weekend, the number of cases saw a sudden increase, prompting various states’ authorities to impose a lockdown in 80 cities and districts across the country until March 31.

Following the robust steps taken by the Central and State GOI in tackling the pandemic, CTA has also issued a series of guidelines for the Tibetan community in India, Nepal and Bhutan; its central and regional offices and also instructed all to follow the order and directives issued by the host government and state authorities. 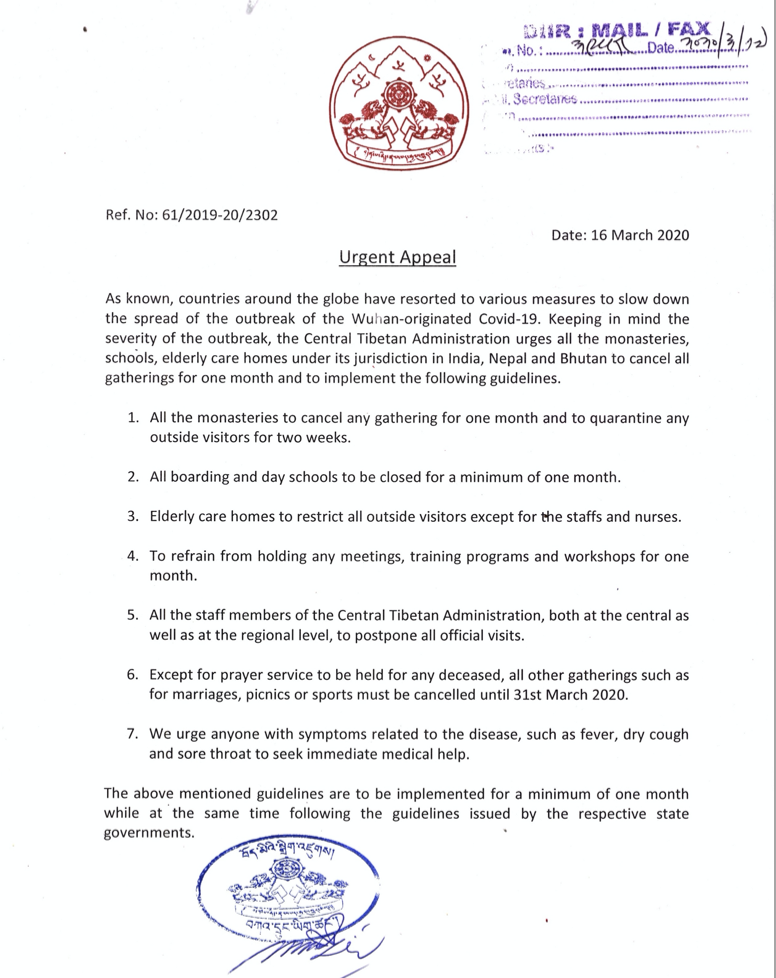 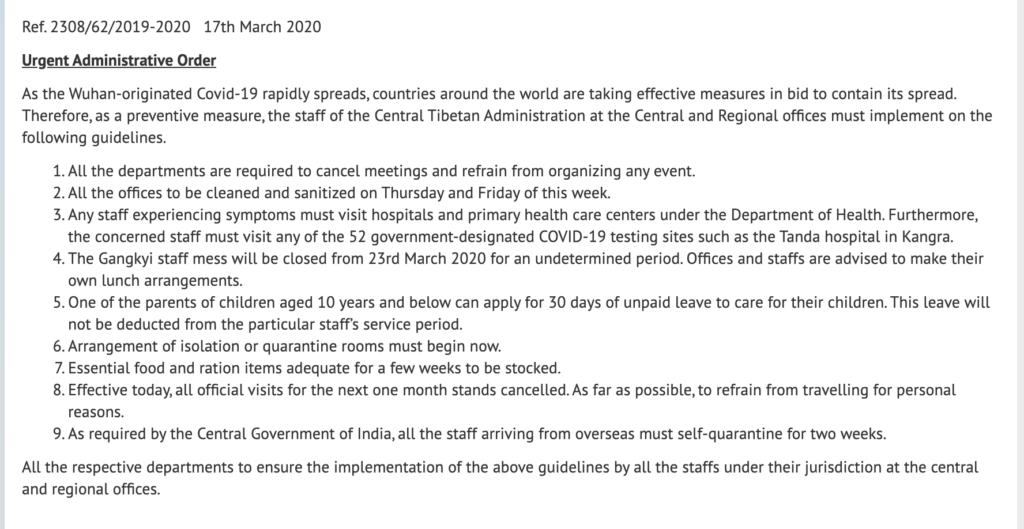 Urgent Administrative Order dated 17 March 2020 issued by the Kashag, Central Tibetan Administration for its offices at the central and regional level.