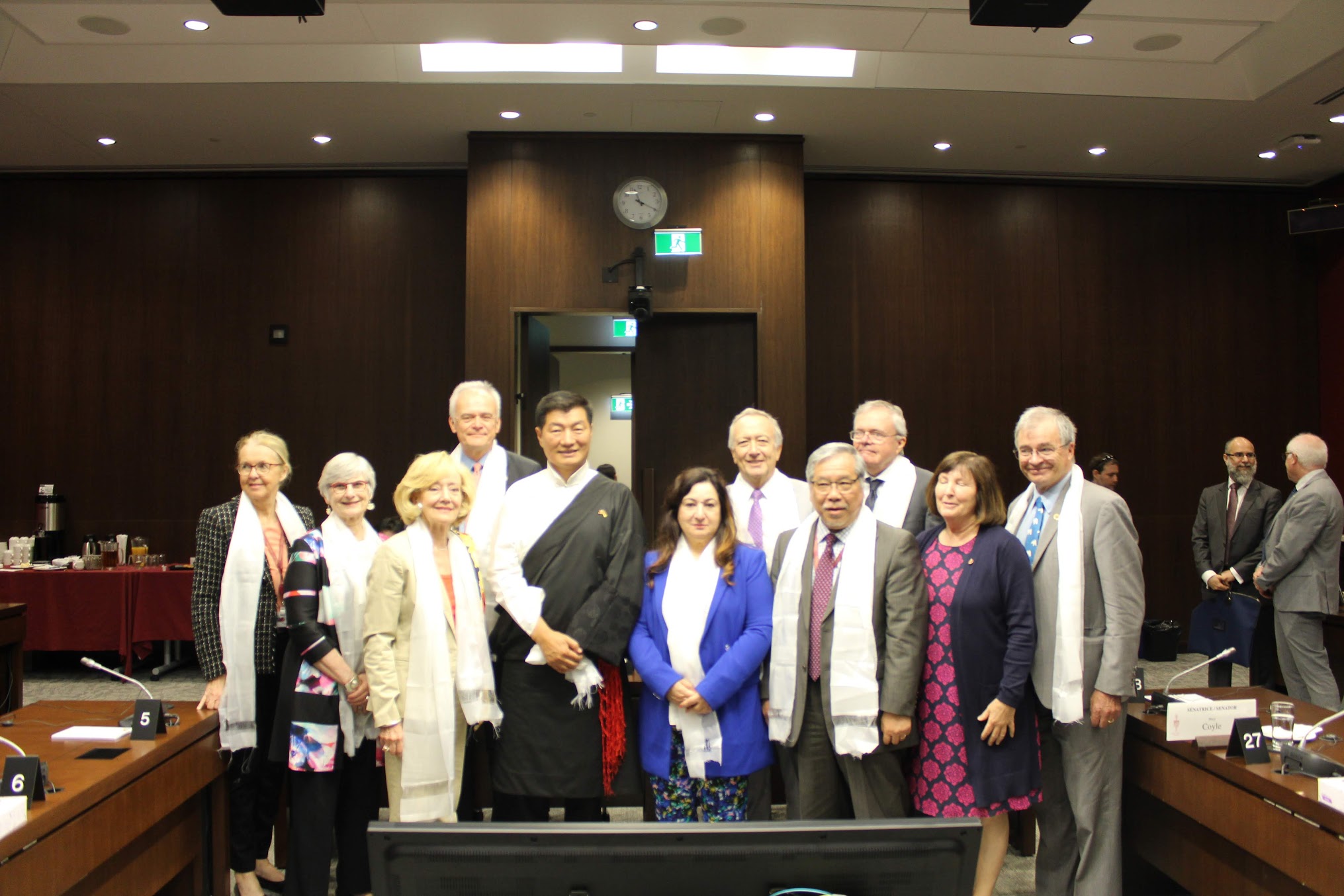 Dr. Sangay opened the session by recognizing this year as the 60th anniversary of Tibetan Uprising Day, commemorating the Tibetan uprising against the Chinese occupation of Tibet, and the 30th anniversary of the Tiananmen Square Massacre. He also described the Chinese government’s massive human rights violation — the jailing of over a million Uyghurs. He praised the recent motion on Tibet made by Senator Thanh Hai Ngo calling on the Government of Canada to actively support the genuine autonomy of Tibet, and also called on Canada to ask for reciprocal diplomatic access to Tibet. Dr. Sangay underlined that the Tibetan government-in-exile continues to support His Holiness the Dalai Lama’s Middle Way Approach — the protection and preservation of Tibetan culture, language, religion and national identity — within the framework of the People’s Republic of China’s constitution. According to the Freedom House, Tibet is the second least free places in the world, after Syria.

In response to questions from members of the Standing Committee, Dr. Sangay reiterated that the autonomy within China that Tibetans were seeking “was less than granted to Hong Kong.” He noted that the lack of trust from the Chinese government was hampering further the Sino-Tibetan dialogue on this issue, observing that the Chinese government incorrectly believed Tibet’s push for autonomy was a “hidden agenda for independence.” Dr. Sangay further updated the human rights situation in Tibet, saying that despite the Chinese government’s destruction of over 90 percent of Tibet’s monasteries (such as Larung Gar) and religious objects, Buddhism has risen in Tibet, although practitioners must be very careful and discreet in their observances. Repression of Tibetans is ongoing under “socialism with Chinese characteristics.” Tibet serves, he noted, as “a litmus test for all countries in their support for human rights and democracy.”

In reaction to a question about increasing Chinese government harassment of Tibetans abroad, Dr. Sangay said that the number of protests against his appearances around the world, managed from Beijing, have certainly increased. He also cited the danger presented by a group in Canada, claiming to represent Canadian Tibetans, that was spreading misinformation, most probably directed from China. He closed by thanking Canada for its support, recognizing that “justice was needed in Tibet.”

Alex Neve also underlined the dire situation of human rights in China, broadly outlining the evidence of surveillance, intimidation, jailing and torture not only of Tibetans, but also of Falun Gong members, human rights activists and Uyghurs. In response to questions on the way ahead, given these challenges, he strongly recommended that the Canadian government review the recommendations given in the Canada Tibet Committee report, Trade and Human Rights in Tibet: Consideration for a human rights sensitive trade policy, which looks at Canada-China trade through a human rights lens, describes how Tibetans are particularly disadvantaged within the Chinese economy. He also cited 10 points that Amnesty International Canada recommended that the Canadian government support, such as requesting that “Canadian diplomats, officials and others be given unhindered access to Tibet.” Mr. Neve strongly urged the Senate to recommend that reports of threats and harassment of Tibetans in Canada by the Chinese government be properly investigated through a coordinated strategy.

Mr. Shawn Steil, Executive Director of Greater China Policy and Coordination, Global Affairs Canada, described Canada’s concern about the human rights situation in China. He said the government continued to call on China to protect all its citizens, and to press for access to Tibet. He agreed that Canadian government policies on China needed to be coordinated, and that it was early days for such action by his newly established directorate.

The chairperson, Senator A. Raynell Andreychuk closed the session by noting that one of the ways to bring some Chinese officials to account for their actions might be to apply the Canadian version of the Magnitsky Act, the Justice for Victims of Corrupt Foreign Officials Act. She also thanked all for attending, and especially praised Dr. Sangay’s frank and articulate presentation, which gave the committee the facts needed to “add to our dialogue.”

The hearing is organized by the office of Honorable Senator Thanh Hai Ngo in collaboration with Canada Tibet Committee. 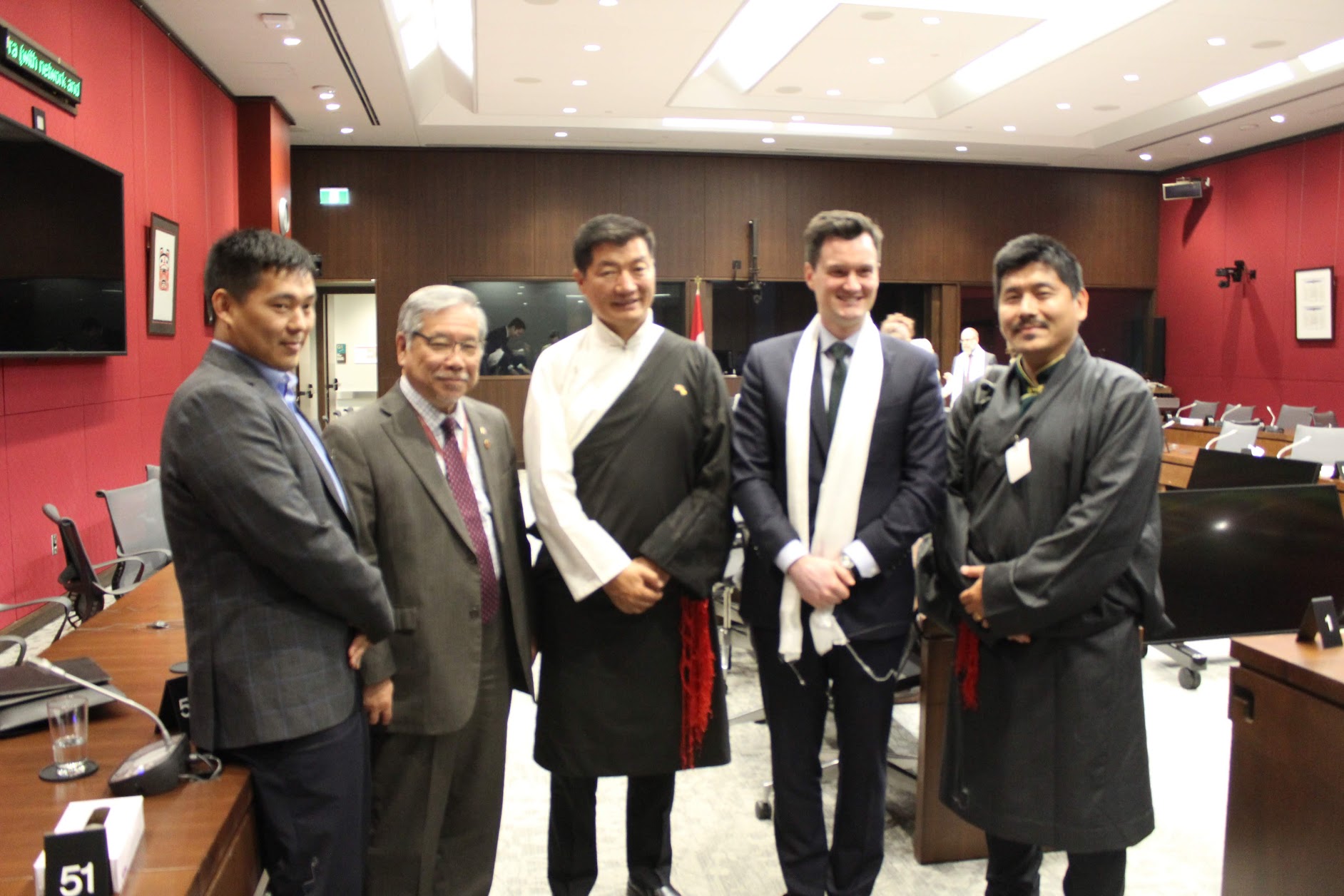