New Delhi: On World Environment Day, Bharat Tibbat Samanvaye Sangh organised a webinar focusing on the importance of water conservation through forestry and environmental conservation. Being the Chief Guest, Head of Parmarth Niketan Ashram, Swami Chidanand Saraswati began addressing the environmental exploitation that has been pursued to satisfy societal needs and developmental goals. He also made it clear that saving Mother Earth saves Nature and Nature and would then safeguard our culture.

Taking the most recent and devastating wave of Covid-19 in India, Swami C. Saraswati told the participants unless we uphold the values of nature and its resources, we will have to continue to run after oxygen as was the case most recently.

Chief Advisor to Uttarakhand Government Dr. Raghuvir Singh Rawat, an eminent speaker on the subject, pushed for the pragmatic shift from chemical farming to organic. Although many plantation drives are being undertaken at different levels, what is more important than the plantation is the care and safeguarding of the plantations. These ancient texts or references including Ayurveda denotes more than 10,000 different kinds of trees that are vital for the sustenance of the ecosystem.

Sh. N.P.S. Bhaduria, Organizational Secretary, BTSS, said India was a land of Aryabhumi where once rivers of milk and curd flowed, but now it is experiencing unheard natural calamities, drought, floods and famines.

He warned that all these are caused due to ignorance and cultural deviations. And the only methodology to save this is to preserve Water, Jungle and Land. He stated that BTSS is overwhelmingly focused on safeguarding India’s natural resources, boundaries, rich cultural heritage, and extension with Tibet and Tibetan people.

Sh. Bhaduria also expressed his gratitude to Sh. Hemendra Tomar, one of BTSS’s founding members, who gave him the opportunity to serve Bharat Mata and its cultural affinity with Tibet.

As invited by BTSS, the Coordinator for ITCO, Sh. Jigmey Tsultrim spoke on occasion, sharing his insightful perspective on the interconnected nature of the world and how one’s developmental project can hinder others’ ecology and livelihood.

For instance, he said Communist China’s self-orientated economic projects such as excessive damming and hydro projects on the Tibetan originating rivers adversely affect countless people and the ecology of the downstream countries, including India. He added that in the 1950s, there were officially 22 big or small dams which then increased into more than 22000 dams by 2000. Until 1998, more than 50% of forests were cut down in Tibet and there is little information available on the remaining 50 percent.

‘Tibet is a water tower of Asia and the third pole of the world.’ However, he noted that Tibet’s fragile ecology is already depleting at an unprecedented rate. Over 8790 glaciers are reportedly retreating into lake or pond from its 46000 specified glaciers and out of which more than 204 of these lakes could cause unprecedented disasters at any given point.

Mr Tsultrim urged the participants to speak on the existing challenges that lie ahead in the immediate future, threatening Tibet and Tibetan People, and India as well.

He concluded by thanking the BTSS for its unwavering support for the cause of the Tibetan struggle against the injustices of the Communist Chinese Government.

Founder of Terriers Foundation and National In-charge of Environment Wing, BTSS, Col. (retd)H.R.S. Rana reiterated that BTSS and other like-minded organisations must jointly make this reality on the ground upon preserving nature and its resources.

He specifically urged the younger participants to come forward and take the baton for its longevity and sustainability. Col. Rana recollected his experiences in Eco Task Force at Ladakh, Mussoorie and Bengaluru, where planned efforts and sublime faith had successfully restored natural resources in the region.

The event was hosted by Dr. Rahul Tomar, DAV College, Jalandhar, who reflected his professional experience in this task and highlighted the speakers’ flashpoints to amplify its significance and relevance for a larger audience at Virtual World.

He also informed the participants about the upcoming webinar on 15 June 2021, remembering the Martyrs of Galwan Valley and uncovering the true face of Chinese double standards.

More than 200 participants joined the event that Sh Ashutosh Gupta and Vijay Maan technically supported. Due to a worldwide technical snag at Google, the proposed google meet at 10:30 am on 5 June 2021 Saturday was rescheduled at 6 pm and continued till 9 pm of the same day. 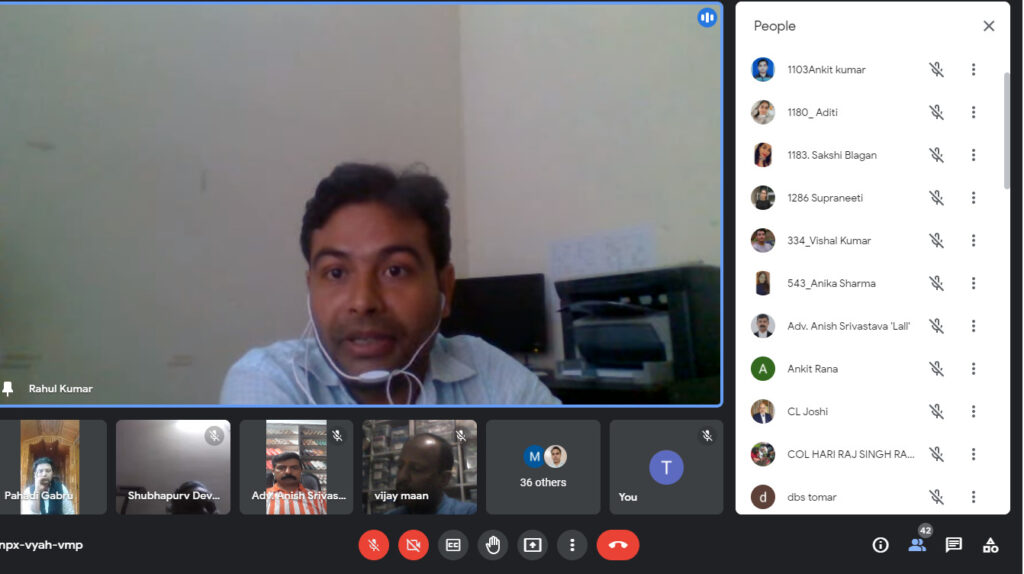 Some of more than 200 participants joining the session.