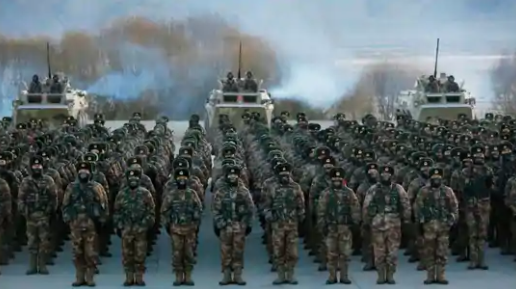 China’s Tibet military region, which borders the disputed boundary with India, held a rare multi-dimensional armed forces’ exercise this month amid the two countries’ ongoing friction along the Line of Actual Control (LAC) in eastern Ladakh.

The Tibet military region is under the PLA’s Western Theatre Command (WTC), which covers China’s border with India.

The report did not identify the specific region where the exercise was being held but said: “land and air force joins hands in three-dimensional assault” at “certain place” on the Tibetan plateau.

The report published in the PLA Daily said a multi-dimensional exercise was being held to improve combat capabilities.

“A composite brigade of the Tibet military region joined hands with the Army Aviation Force to launch a three-dimensional assault, starting a normalised joint exercise and training.”

“It is understood that in the past, except for the annual comprehensive exercises, the brigade training was mostly ‘single combat’. How to enable commanders at all levels to find the right time and rhythm during joint operations and to improve the combat effectiveness of the system is an urgent issue to be solved,” the PLA Daily report added.

“The battle for the future is the systemic ability. Only when joint training goes from ‘year-end reunion’ to ‘meeting-every-day’, can it realise the transition from ‘linking’ to ‘linking for the heart’,” an officer was quoted as saying.

The brigade leaders told the PLA Daily that they focused on summarising past problems.

The joint training exposed the shortcomings and weaknesses, the report added.

The elaborate exercise is being held as the two countries continue to be locked in the longest military standoff – which began last May – in decades in eastern Ladakh in the backdrop of reported large-scale deployment.

The disengagement of the two militaries seemed to have stalled despite several rounds of talks, the last diplomatic one being held a month ago on December 18.

The report on the military drill is one of several articles published by China’s state and military media to indicate its war preparedness along the LAC with India.

Many reports have focused on the Central Military Commission (CMC) – the PLA’s command body headed by President Xi Jinping – improving the logistics of troops deployed along the disputed border with India.

Last week, the state media reported that China recently revealed another type of military-use exoskeleton suit that is powered and that can be used for carrying ammunition.

That followed a report on an earlier version of non-powered exoskeleton suit, which entered service with the PLA’s border defence troops in late 2020 for missions including supply delivery, patrol and sentry duty, the state media report said.

Xi, in 2021’s first order issued earlier this month to the PLA, had focused on the need for “full-time combat readiness” and said the armed forces must use frontline conflicts to polish troop capabilities.

Xi said the PLA must be ready to “act at any second”.