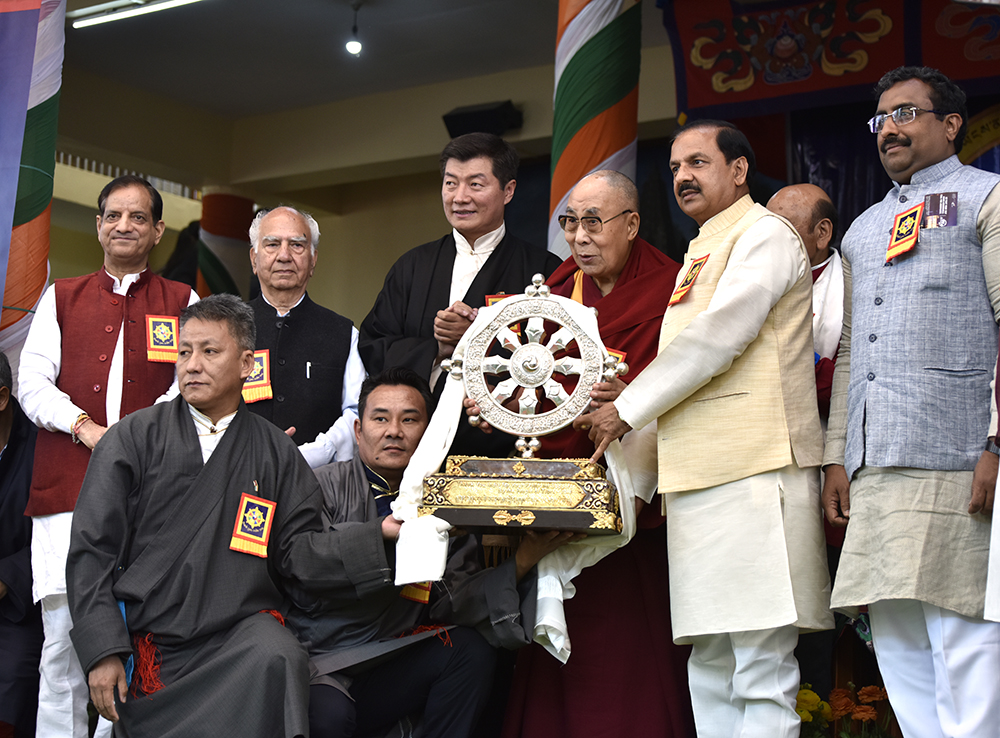 Tibet is inextricably linked to India through geography, history, culture, and spirituality. Tibetans refer to India as ‘Gyagar Phagpay Yul’ or India, ‘the land of the noble ones.’

His Holiness the Dalai Lama calls India the ‘Guru’ and Tibet its ‘Chela’ and refers to himself the ‘Son of India’ and a true follower of Mahatma Gandhi. He continues to advocate the revival of India’s ancient wisdom based on the Nalanda tradition. Today, His Holiness is the best ambassador for Indian values of non-violence, ahimsa and inter-religious harmony and the promotion of basic human values: compassion and kindness. 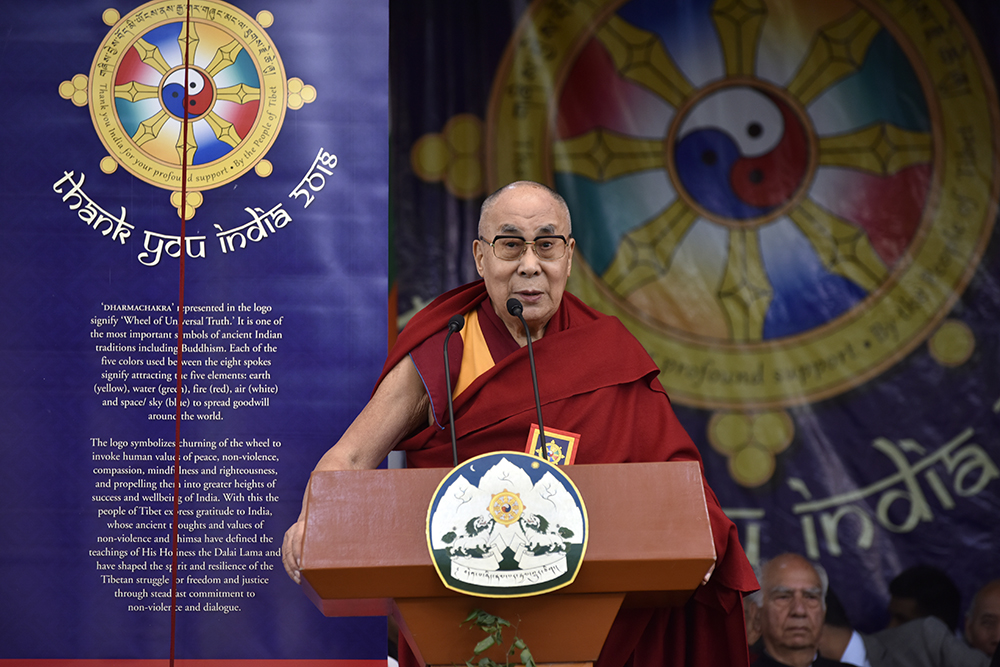 His Holiness the Dalai Lama speaking at 31 March program at Tsuglagkhang. Photo/Tenzin Phende/DIIR

With the blessings of His Holiness the Dalai Lama and under the leadership of the Central Tibetan Administration, Tibetan people across India are observing the year 2018 with a series of Pan-India events spanning 12 months both on the physical and virtual space to publicly express gratitude to the Government and people of India, for ensuring the success of the efforts of Tibetan people: promoting its rich ancient culture and unique identity, assuring the viability and sustainability of Tibetan leadership and Tibetan communities, and leading the Tibetan struggle through steadfast commitment to non-violence and dialogue. 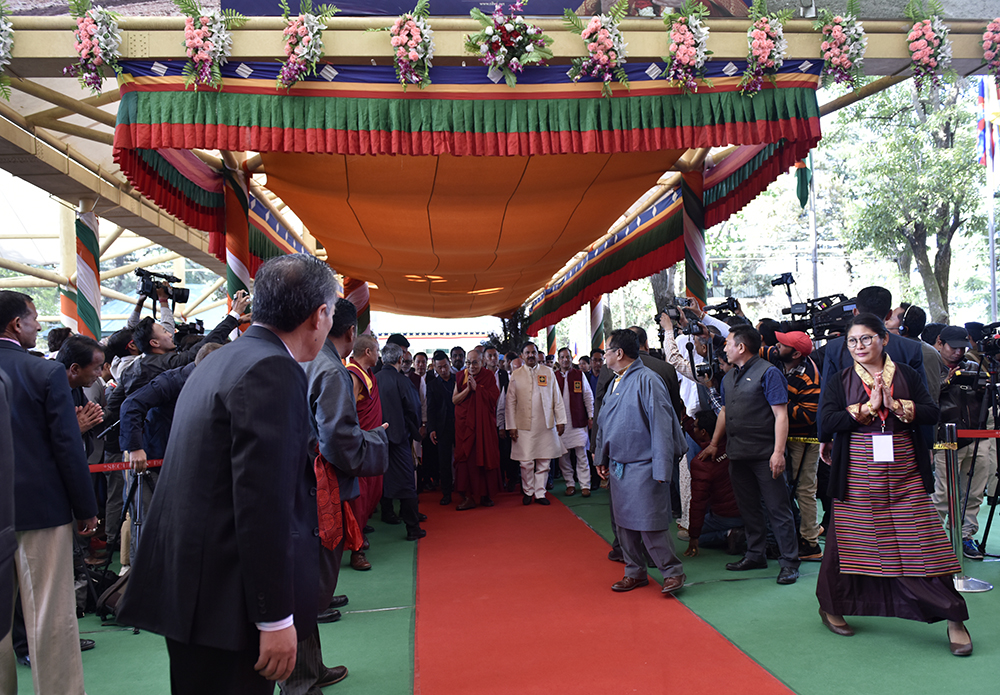 His Holiness the Dalai Lama with other dignitaries entering elaborately decorated with overhead canopies decked in the saffron, white and green of the Indian tricolour national flag.

On 31 March, an event aptly named ‘Thank you India’ was held at the courtyard of the Tsuglagkhang, the Main Tibetan Temple, which had been elaborately decorated with overhead canopies decked in the saffron, white and green of the Indian tricolour national flag.

The Chief Guest, Minister of State for Culture, Tourism and Civil Aviation, Dr Mahesh Sharma and Guest of Honour, National General Secretary of the Bharatiya Janata Party, Ram Madhav and other dignitaries were present at the function. Artistes of the Tibetan Institute of Performing Arts (TIPA) gave a stirring rendition of the ‘Thank You India’ song. 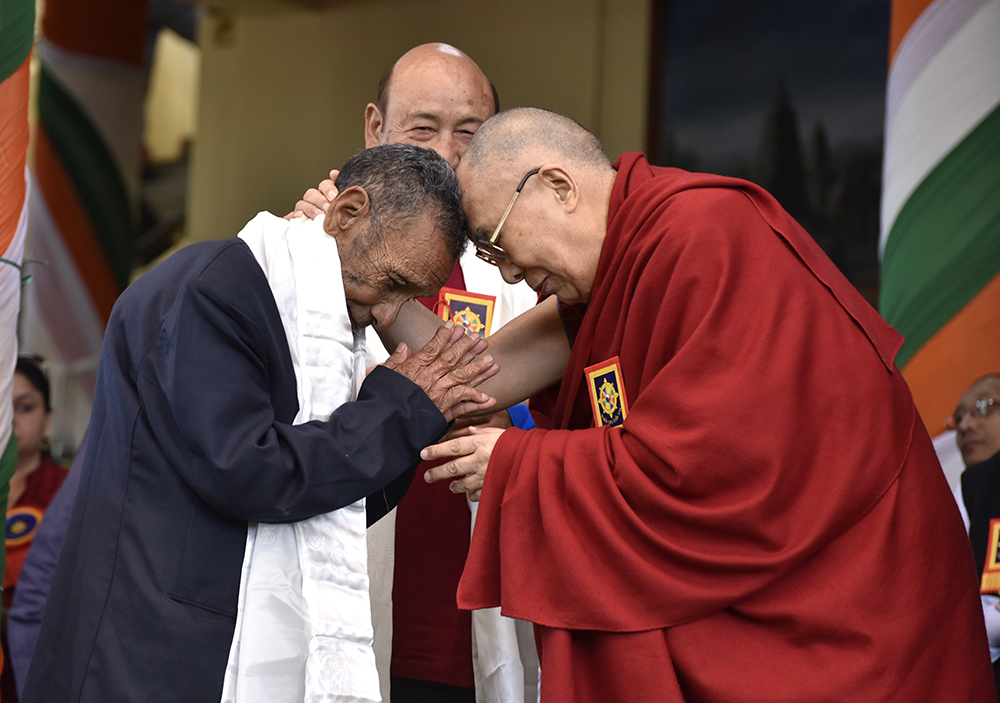 Naren Chandra Das,the sole known survivor of the seven Assam Rifles personnel who received His Holiness at the Indian border in 1959 being felicitated. Photo/Tenzin Phende/DIIR

CTA also felicitated Naren Chandra Das, the sole known survivor of the seven Assam Rifles personnel who received His Holiness the Dalai Lama at the Indian border in 1959. His Holiness embraced the elderly man and presented him with a ‘Dharma chakra’ to express gratitude. 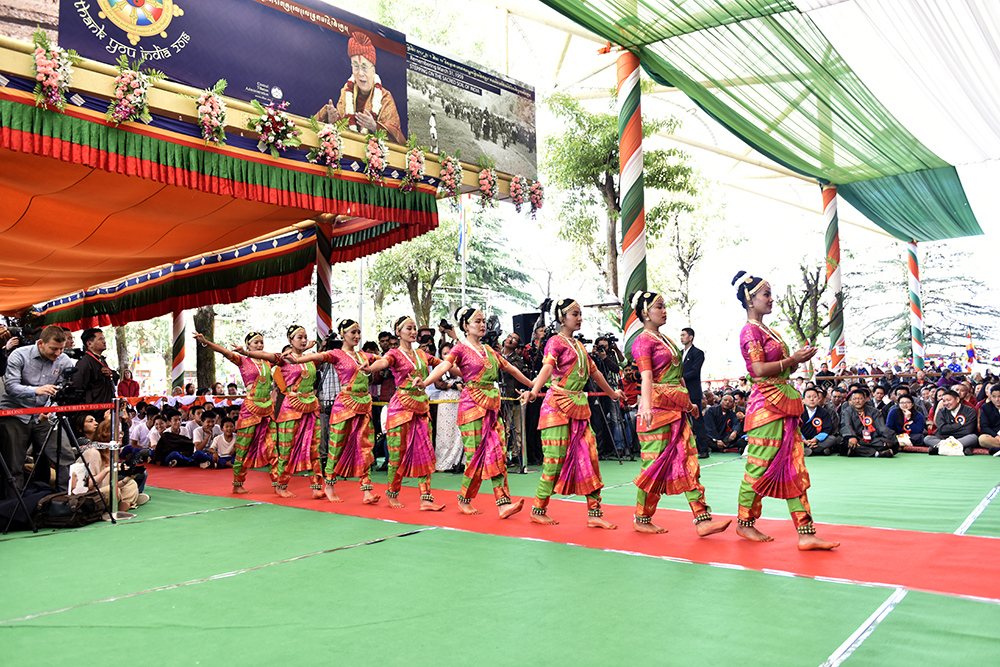 Members of TIPA gave an impressive performance of Bharatanatyam, an Indian classical dance traditionally presented only by women.

At the function, Sikyong reminded the audience that it is currently harder for a journalist to visit and report on Tibet than on North Korea. Likewise, many are aware of the human rights violations taking place in Syria, but few acknowledge those taking place in Tibet.

It is also, however, the sixtieth year of Tibetan resilience. The Sikyong drew a comparison between Prime Minister Modi’s campaign to ‘Make in India’ and Tibetans’ having revived themselves in India. He stated, “Tibetans’ success will be India’s success and today we are here to say ‘Thank You, India.”

A series of documentaries were presented at cultural festival of Tibet at India International Center.

As part of the thank you India event and to commemorate the 60th year of His Holiness the Dalai Lama’s arrival in India, 60 Indian friends have organised a peace march from Chuthangmo/ Khenzimani in Arunachal Pradesh to Tezpur in Assam.

Tibetan monasteries and nunneries across India will observe an interfaith prayer meeting titled ‘Pray for India’ where Buddhist monks along with leaders of different religious tradition and faith will pray for India’s success and well-being of the Indian people on 29 May 2018.

Tibetans in India will engage in a mass tree plantation drive on world environment day on 5 June 2018.

On International Yoga Day, Tibetans in India will take part in Yoga day events organised by Ministry of Ayush, Government of India.

On the 83rd birthday of His Holiness the Dalai Lama, Tibetans across India will feed the hungry and the homeless.

Observing Swach Bharat, an initiative of the Indian Ministry of Drinking Water and Sanitation, Tibetans in India will initiate a mass cleanliness drive.

On the occasion of World Human Rights Day and the 29th anniversary of the conferment of Noble Peace Prize on His Holiness the Dalai Lama, Tibetans across India will distribute blankets and warm clothes to the homeless to brace them from the oncoming cold of the winter.