Photo Story: ‘Life in Exile’ – On a Journey to Serve a Community that Built Him 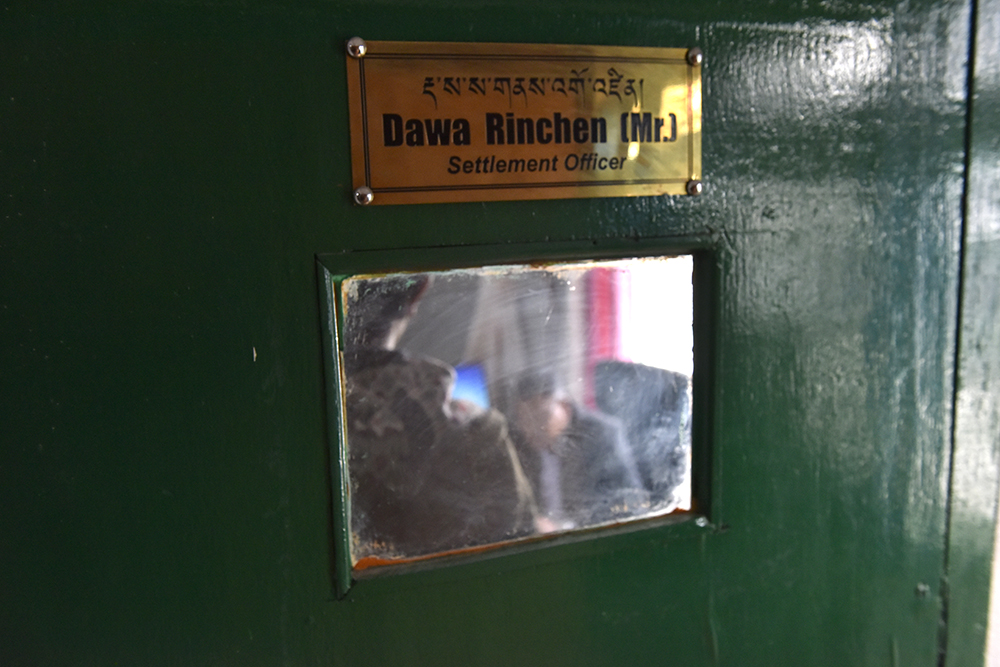 Through the small window of settlement officer at work. Photo/Tenzin Phende/DIIR

“I was born in the winter of 1964 on the 7th mile at a roadside makeshift tent in Sikkim where my parents, like many other Tibetans, were working on the Nathula road as road builders. I was born into Gangpa Dhekyi family.”

Recalling his growing up years in India as a refugee, he said, “Even three days after my birth, I didn’t have a name, as there was no lama around to give one. When the registrar at the roadside asked for the baby’s name, they decided to give my name according to the day I was born, so I was given Dawa as I was born on Monday. But they felt it was not enough to give a single name to a child as they found the surname missing. At this confusion, my aunt suggested Rinchen as my surname. And thus, I was called Dawa Rinchen since then”.

At that time, it was a difficult phase for Tibetans in exile. While the parents work at road constructions, the babies were kept nearby so that they could keep a watchful eye on them. As food was scarce, parents would fetch dry wood from the forest and give it to the army kitchen in the vicinity in exchange for leftover dal, roti, and rice.

“After a few years of working as road construction workers, my family moved to ‘Dekyi Larsoe’ a newly established Tibetan settlement in Bylakuppe in 1969. The relocation came about under the blessings and efforts of His Holiness the Dalai Lama and the Tibetan government-in-exile (now known as Central Tibetan Administration),” he elaborated.

During those days, a majority of the Tibetan people were poor but they were happy. Children often wear patched clothes, running here and there barefoot and there was a scarcity of water in the village. We had to fetch water and woods from a distant jungle every dawn and dusk. Those were the time where we didn’t have a gas cylinder to make food instantly like today!”

At the new settlement in exile, for survival, he had to till the land and sow barley. Since it was more like farming, he remembered shepherding goats and cows at the village. He took a plunge to serve family rather than continuing his studies since he was the eldest amongst six siblings- three boys and three girls. With this sense of responsibility, he left his schooling when he was in fifth grade in CVP CST Bylakuppe. He went with his parents to help in their sweater business; as for many Tibetan, it is a source of income during winter.

He recalled “At age 16, I got admitted into Army Academy in Dehradun. Like many Tibetan youth and elders, in 1980, I joined army academic school with a strong conviction that one day I will die fighting against China for Tibet, the motherland which was forcibly oppressed under the Chinese Communist government. I studied teacher course at Army Academic Force for three years. And served as weapon, drills and physical instructor and boxing coach during my service at the academy.

So, I enrolled in ‘ཕར་ཕྱིན་’ Paramita class at Institute of Buddhist Dialectics; also sought teachings and lessons from Lamas, Geshes at Dharamshala.

I later started Tibet Tours and Travel in 1995. With this travel business, I was moving ahead successfully in life.

Currently, Dawa Rinchen is a Tibetan Settlement Officer, Dharamshala and first to be nominated as a Councillor at Dharamshala Municipal Corporation, Himachal Pradesh Cabinet on 20 March 2017. 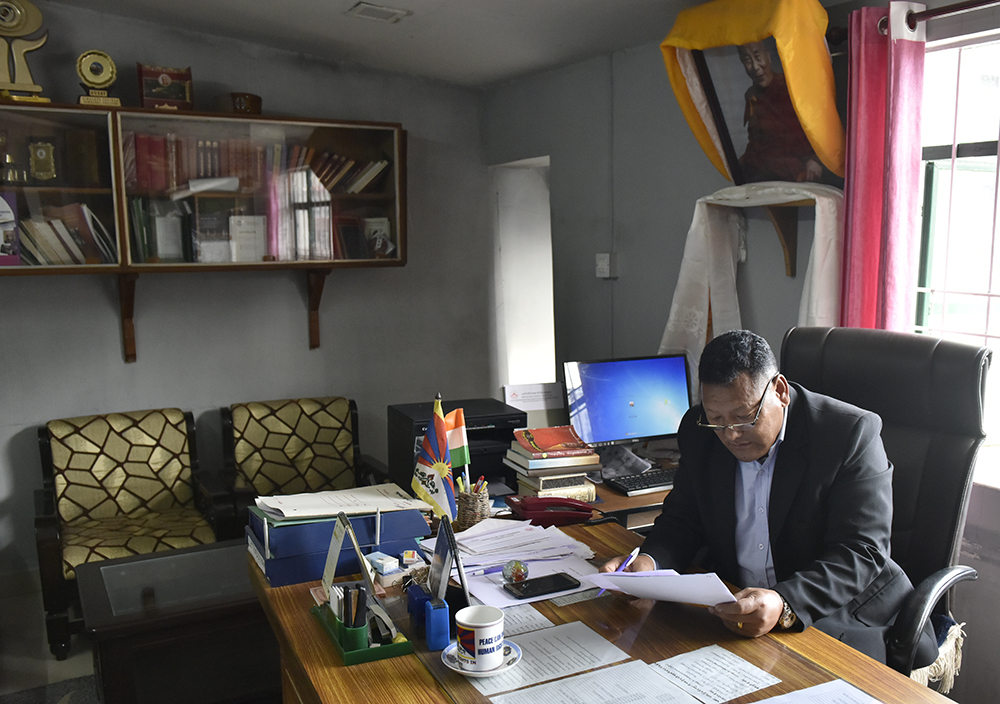 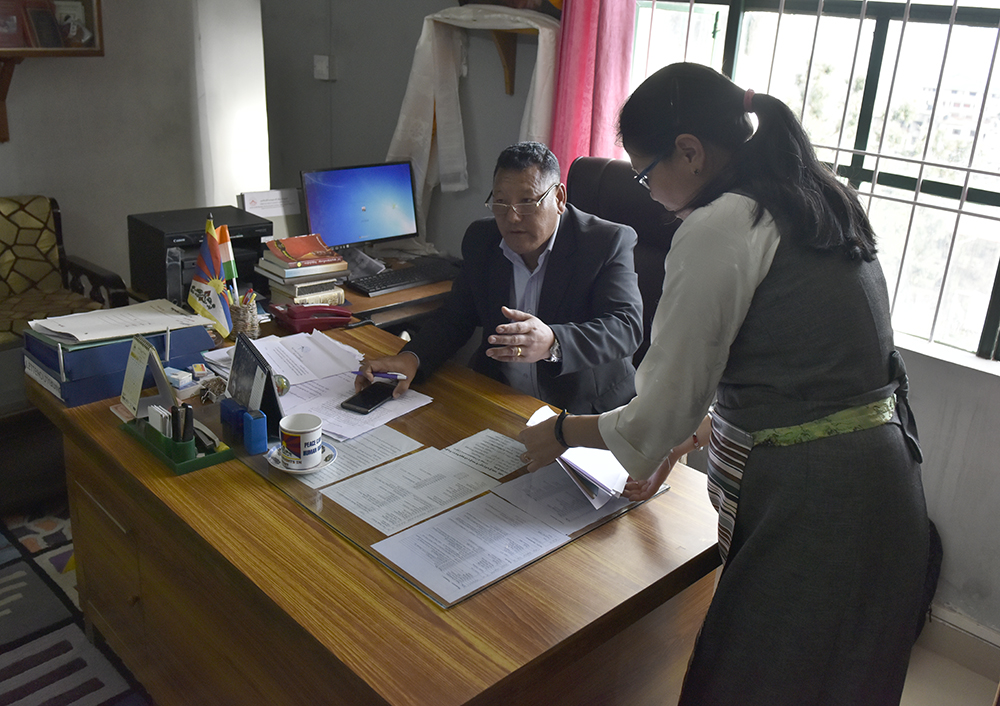 Dealing with a resident of Dharamshala regarding ongoing RC online registration. Photo/Tenzin Phende/DIIR 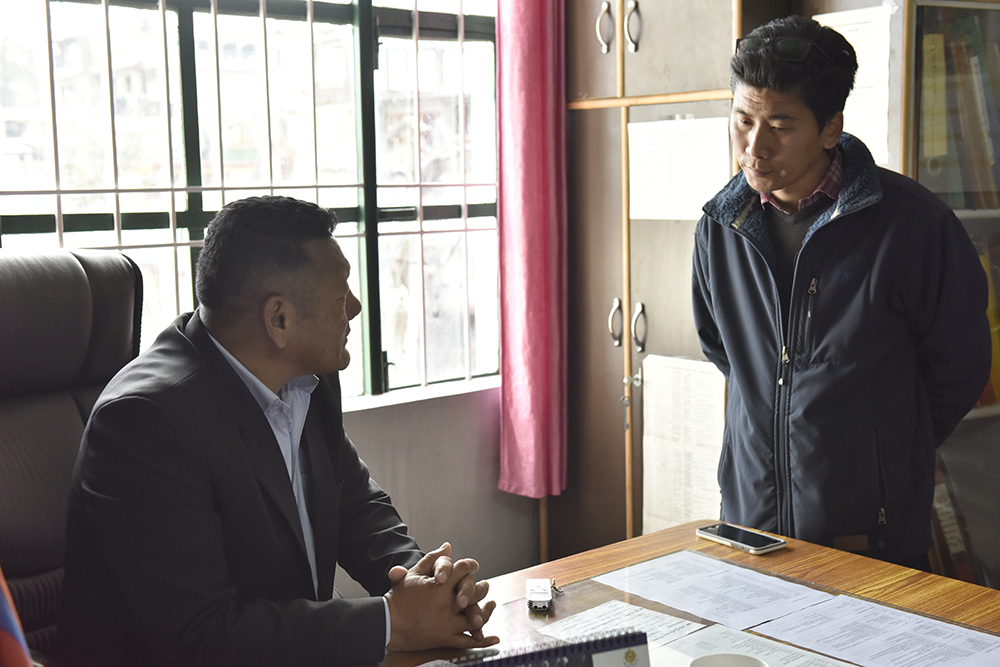