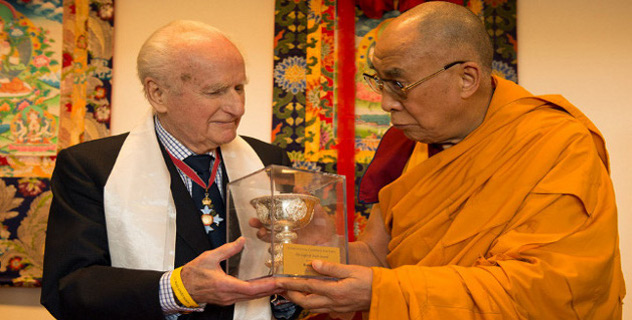 Late Mr Robert Ford (1923-2013) being presented with International Campaign for Tibet’s Light of Truth award by His Holiness the Dalai Lama in Fribourg, Switzerland, on April 13, 2013. Photo/Manuel Bauer

DHARAMSHALA: The Central Tibetan Administration expresses deep sadness over the demise of Mr Robert Ford, the first foreigner who served in the Tibetan government service before the Chinese invasion of Tibet. He passed away at the age of 90 in London on 20 September.

Mr Ford first travelled to Tibet in 1945 to join the British Mission in Lhasa as a radio operator. It was during this time that he had his first audience with Holiness the Dalai Lama, who was then 11 years of age. In 1947, he was asked by the Government of Tibet to join it’s service to start Tibet’s first broadcasting station, train Tibetan radio operators and set up a radio communications network throughout Tibet.

After a year in Lhasa, Robert was asked to go to Chamdo in Kham, eastern Tibet’s capital, to establish a radio link between Lhasa and Chamdo and thereby expand the Tibetan radio communications network. In 1949 Robert and three wireless operator students travelled the northern route to Chamdo. He was the first and possibly the only westerner to travel this route.

In 1950 he, along with other Tibetan officials, was captured by the invading Chinese forces. An earthquake had cut off his planned escape route. The People’s Republic of China accused him of espionage, spreading anti-communist propaganda and causing the death of Geda Lama. Mr Ford spent nearly 5 years in jail, in constant fear of being executed, and was subjected to interrogation and thought reform. Only in 1954 was he allowed to send a letter to his parents. At the end of 1954 his trial was held and he was sentenced to ten years in jail. He was eventually released and expelled in 1955. In 1957, he published the book ‘Captured in Tibet’ about his experience. The book was re-published in 1990 with a preface by His Holiness the Dalai Lama and an epilogue by the author entitled ‘The Occupation’.

In 1957 Mr Ford joined the British Diplomatic Service. During his career he served in the Foreign Office in London and at various posts around the world; in Vietnam, Indonesia, the USA, Morocco, Angola, France, Sweden, and finally as Her Britannic Majesty’s Consul-General in Geneva, Switzerland, from where he retired in 1983. In 1982 he was awarded a CBE (Commander of the Order of the British Empire).

In retirement Mr Ford was able to actively resume his support for Tibet and its people. He was a founder member of the Tibet Society in 1959 and later served as its Vice President. He has written extensively and lectured on all aspects of Tibetan and Chinese affairs in the UK, the rest of Europe, Australia, and the United States. In 1992, he undertook a country wide lecture tour in India, at the request of His Holiness the Dalai Lama. Lectures took place in a number of locations, including the Indian Army College, Civil Service College and in the Lok Sabha, the Lower House of the Indian Parliament. The tour was brought to an abrupt end when Mr Ford and his wife Monica were detained under house arrest in Dharamsala by the Indian authorities. The lectures coincided with the Chinese Premier Li Peng’s official visit to India. Mr Ford had to return home early to the UK. In 1996, Mr Ford was able to orchestrate the first meeting between His Holiness the Dalai Lama and a member of the British Royal family. His Holiness met Her Majesty Queen Elizabeth the Queen Mother, with Robert, on 17th July, at Clarence House.

His Holiness the Dalai Lama presented Mr Robert Ford with International Campaign for Tibet’s Light of Truth award in April 2013. His Holiness said at the presentation, “All of you have been long-standing friends and supporters of Tibet, for which we are immeasurably grateful. As you know, the spirit of the Tibetan people is undiminished and the power of truth remains strong,”

“We have learnt with great sorrow of the death of one of the oldest friends of Tibet, Mr Robert Ford. He was a staunch supporter of the cause of Tibet throughout his life. He was one of the founding members of Tibet Society, the first ever Tibet Support Group. Mr Robert Fold would be remembered for his life long support for Tibet and the Tibetan people. We extend our heartfelt condolences to his family,” said Dicki Chhoyang, Kalon for the Department of Information & International Relations.