No War in Western Europe Since the forming of European Union: His Holiness the Dalai Lama in Italy 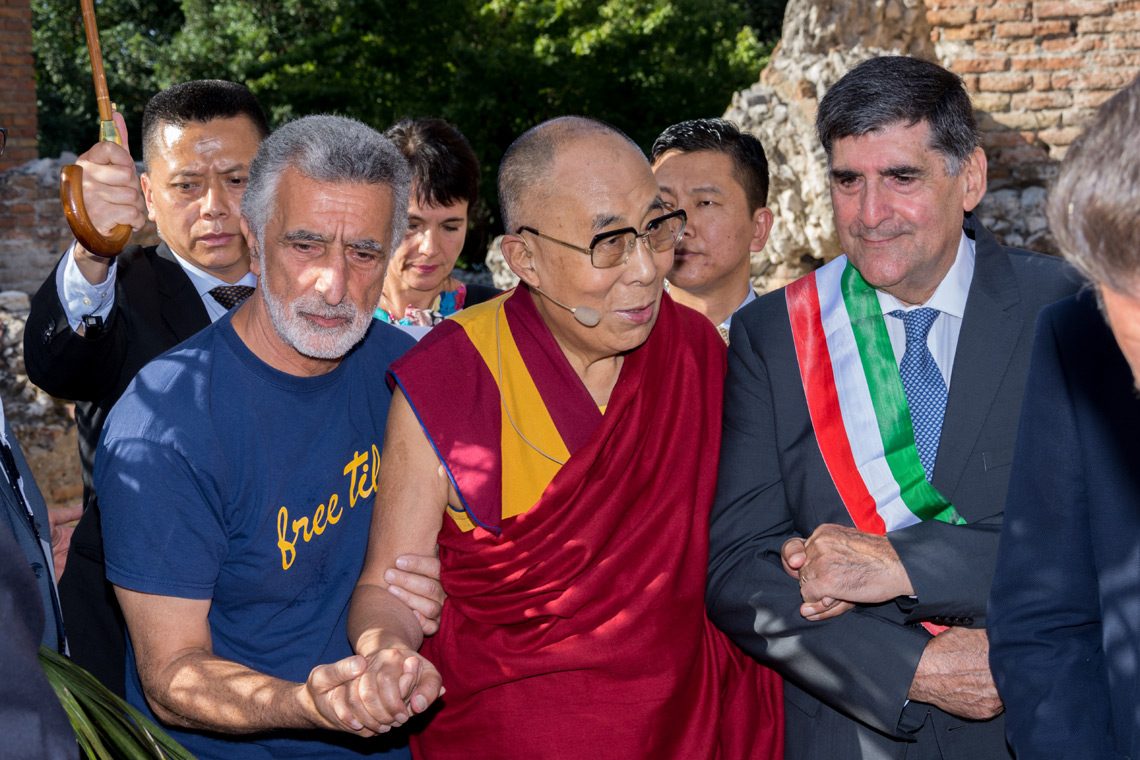 Mayor of Messina, Renato Accorinti and Mayor of Catania Eligio Giardina escorting His Holiness to the stage at the Ancient theatre in Taormina, Sicily, Italy on September 16 207. Photo by Federico Vinci

Taormina, Italy: His Holiness the Dalai Lama arrived in Catania, Sicily on 15 September where he was received by Mayor of Catania, Enzo Bianco, the Mayor of Messina, Renato Accorinti and the Chief Cabinet Secretary of Messina, Mrs Loredana Carrara.

In his public address His Holiness lauded the spirit of the European Union which according to him has prevented war in Western Europe since its formation and has with a holistic view brings all member states to live together in peace and harmony.

“Peace in the world cannot be brought about by use of force. Peace is a state of mind. The use of violence provokes anger and yet more violence. We need to reduce anger and fear by offering friendship. Once again I have to say, I admire the spirit of the European Union, which has adopted the more holistic view that we have to live together and we are better to do it as friends” affirmed His Holiness. 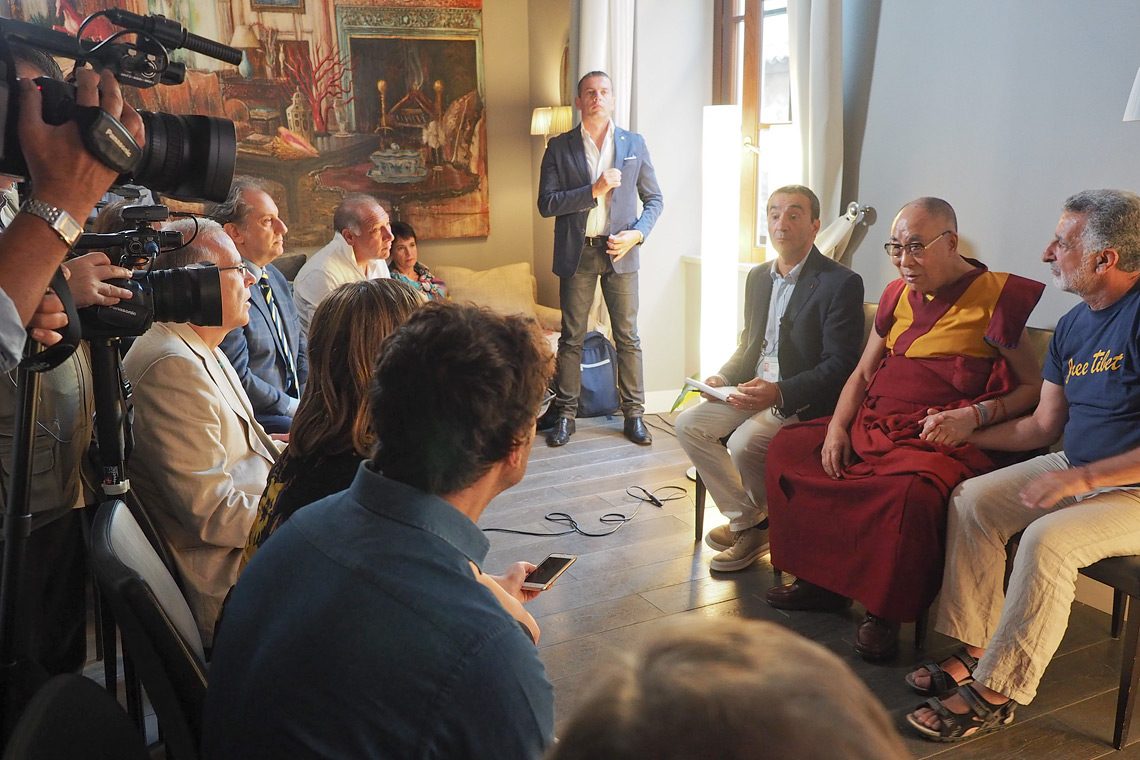 His Holiness meeting with members of the press at his hotel before leaving for his public address at the ancient theatre in Taormina, Sicily, Italy on 16 September 2017. Photo by Jeremy Russell

On the morning of 16 September, His Holiness met with members of the press where he lauded Italy’s refugee policy that welcomes migrants.

His Holiness said, “It is wonderful that this nation welcomes the refugees. On behalf of all of them, I thank you; you are doing a wonderful thing. They will hope to return to their own lands in the future, once peace and security is restored. So it will be good if you can give them shelter and provide facilities for the young to receive education and training that could help them rebuild their nations.” 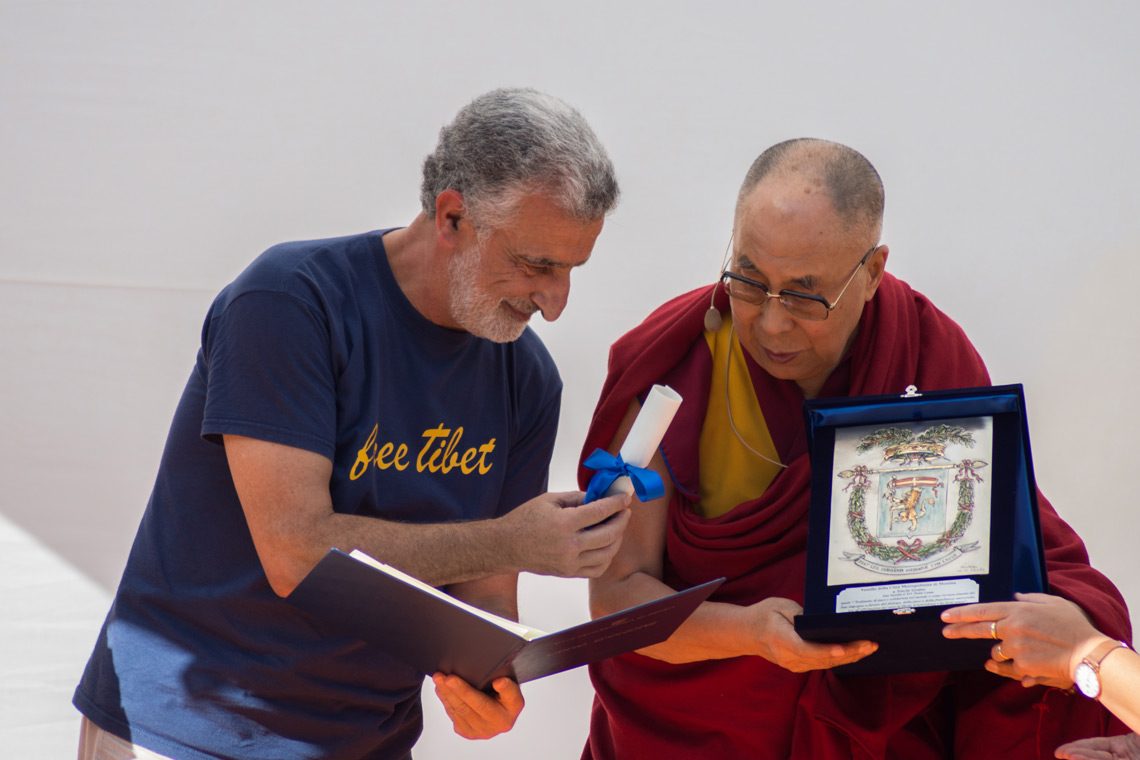 His Holiness receiving the “Honor award of the Metropolitan City of Messina” in recognition of his promotion of peace and solidarity in the world, before his public address at Teatro Antico in Taormina, Sicily, Italy on 16 September, 2017. Photo by Federico Vinci

At the Taormina’s ancient theatre, Teatro Antico, thousands stood at the entrance to the cavea, where His Holiness was welcomed by the Mayor of Catania, Eligio Giardina and the Mayor of Messina, Renato Accorinti. The theme of the talk was “Universal issues of Man and Peace among peoples”

Before addressing the crowd, the two Mayors presented His Holiness with the “Honor award of the Metropolitan City of Messina” in recognition of his promotion of peace and solidarity in today’s world and in appreciation of his commitment to dialogue.

His Holiness extolled the high level of humanitarian action that is being undertaken in Sicily, in particular by welcoming refugees which attests to the island’s commitment to support world peace and harmony. His Holiness began the first subject of the program “peace is the meeting between people” and stressed on the fact that the universal values of peace and brotherhood (oneness of humanity), which is being increasing threatened by current precarious international equilibrium are two indispensable cores for achieving global well-being and peace. 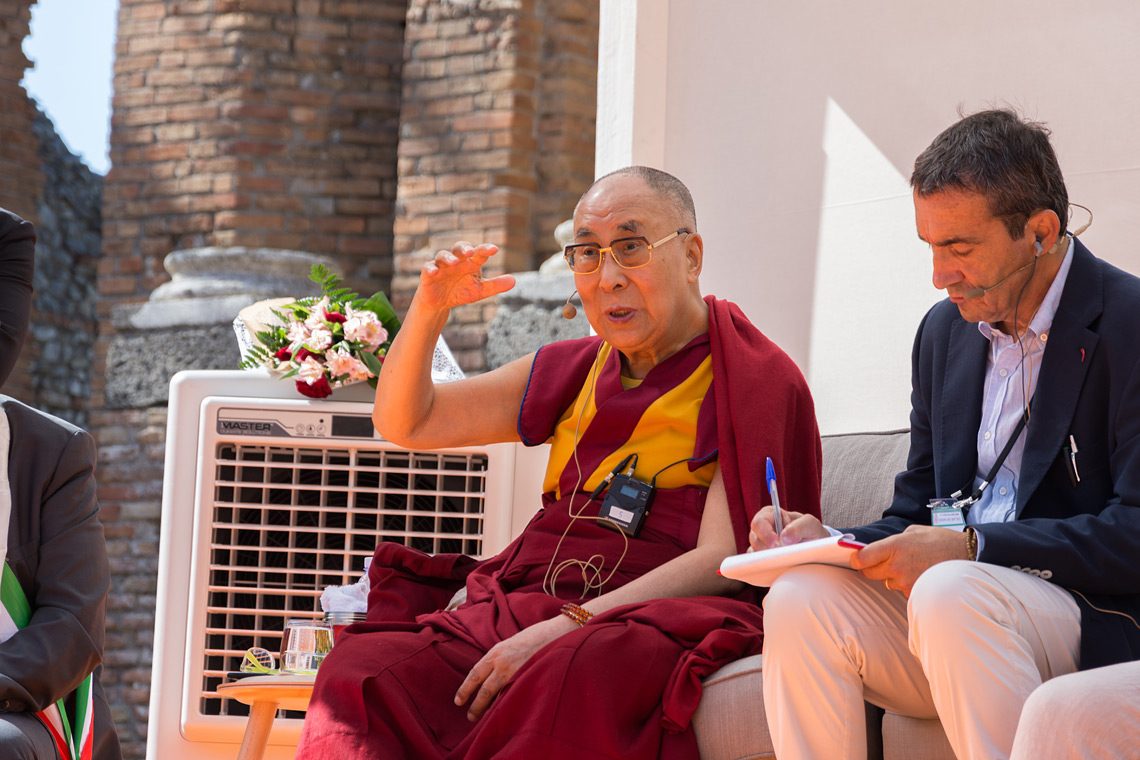 His Holiness answering questions from the audience during the talk at Teatro Antico, Taormina, Sicily, Italy on 16 September, 2017. Photo by Federico Vinci

“Affection is the most important factor. Most of the problems that we face arise from secondary differences emphasized on nationality, race, colour and even faith. Emphasizing too much on secondary level of differences causes killing, fighting, starvation and ultimately, division which is totally unacceptable. We need to think more deeply and recognise the oneness of humanity,” said His Holiness.

His Holiness reiterated his commitment to promoting human happiness through oneness of humanity and stiffening his resolve to promote religious harmony.

“Violence is quite the wrong way to achieve what we want. Ultimately we should aspire for a demilitarized world if we really want to achieve peace,” concluded His Holiness. 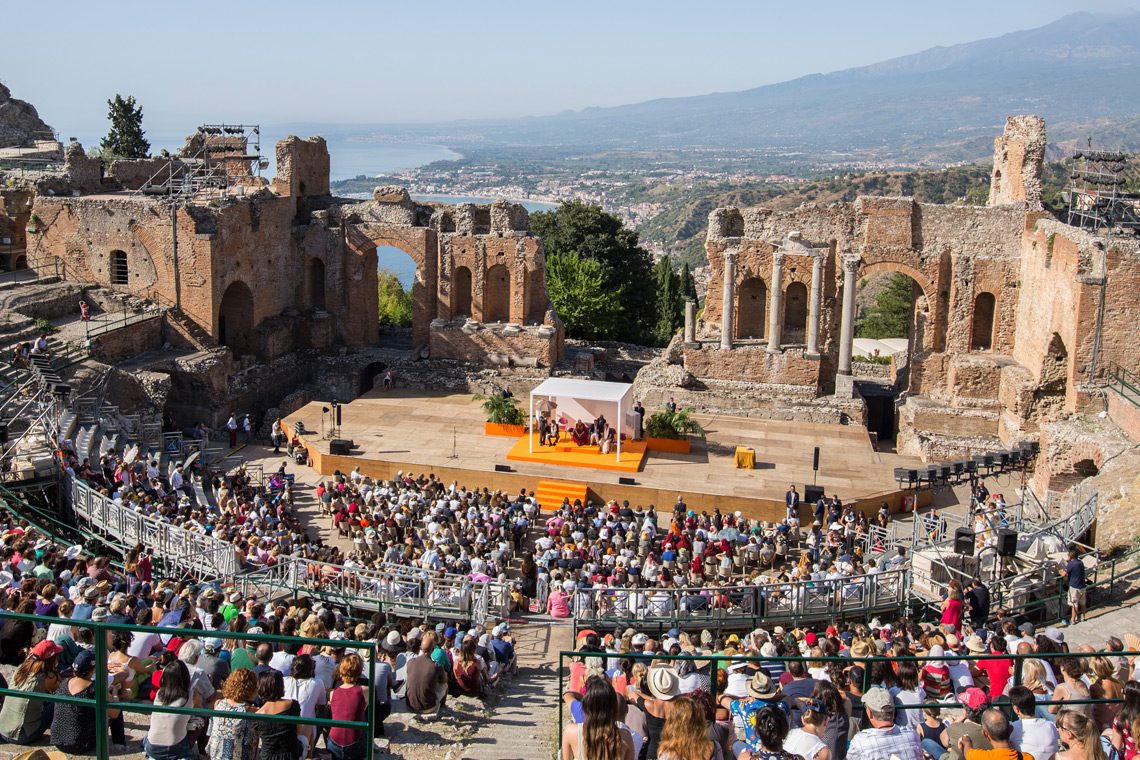 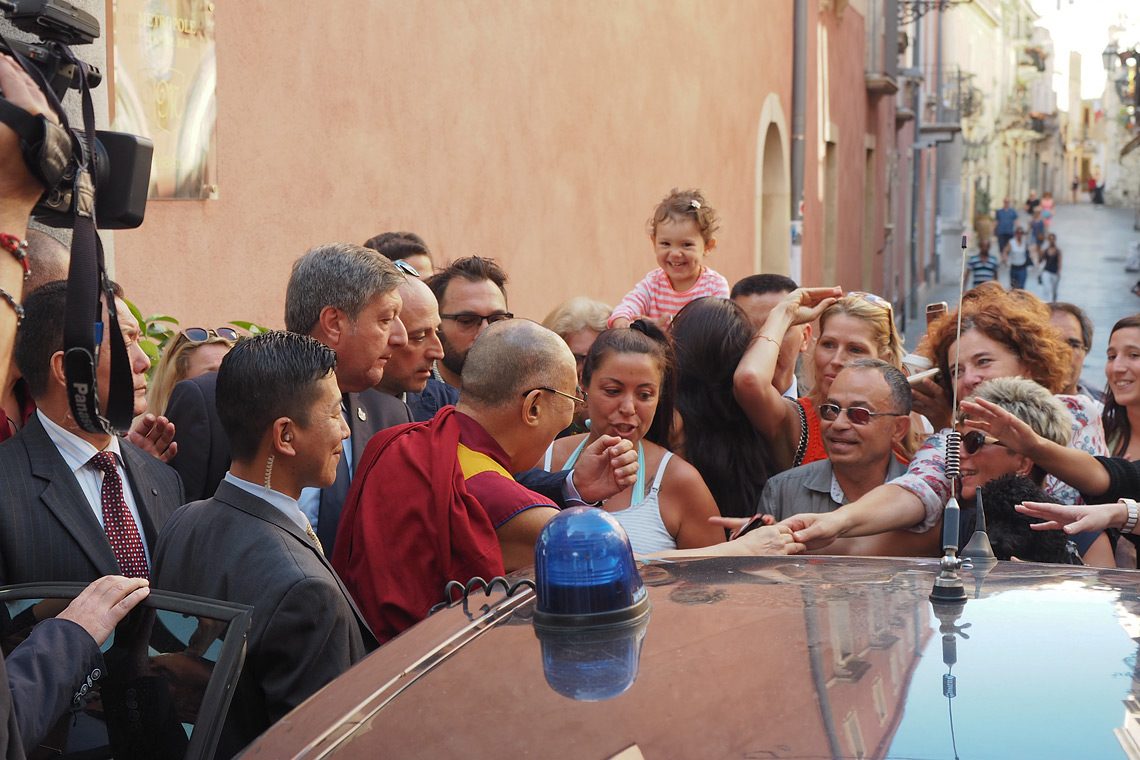 His Holiness shaking hands with his wel-wishers as he departs from his hotel in Taormina, Sicily, Italy on 16 September, 2017. Photo by Jeremy Russell