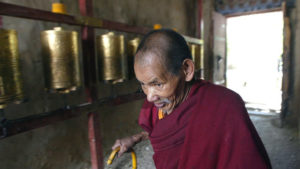 A monk walks past prayer wheels at Sera monastery in Tibet’s regional capital Lhasa in a file photo.

Tibetan monks belonging to Lhasa’s Sera monastery are being ordered to strictly follow Chinese laws and “stand against separatism” in a new campaign aimed at strengthening the restive region’s ties to Beijing, according to Chinese media reports.

Speaking on March 13 at a news conference in the Tibetan capital Lhasa, Monastery Management Committee director Lhakpa Tsering, a Tibetan official working for China’s government in Tibet, told participants that monks should now practice their faith “by standing against separatism.”

“Monks must feel grateful to the Chinese government and show their loyalty to the nation by obeying the country’s laws,” Tsering said, addressing an audience of 320 including monks, management staff, police officers, and security team members.

Citing a set of rules called “20 Prohibitions” introduced in February, Dorje urged the audience to abide by the listed restrictions in their postings on popular media platforms WeChat and Weibo, taking care not to spread information or other material deemed politically sensitive.

Jampa Kelsang, Sera monastery Media, and Education Committee Director, meanwhile cautioned those gathered at the meeting to always “re-pay China’s generosity” in Tibet with loyalty to Beijing and love for the top leadership of China’s ruling Communist Party.

In a move aimed at suppressing Tibetan protests and other challenges to rule from Beijing, Chinese authorities in Tibet began in early 2012 to set up management committees in most Buddhist monasteries, placing them under the direct control of government officials.

Under a previous policy, Tibetan monasteries had been administered by so-called democratic management committees, whose members were monks nominated by the government and local Communist Party officials and then elected by their own communities.

As Tibetans both inside Tibet and outside the region marked the 60th anniversary this year of a failed 1959 national uprising against Chinese rule, China’s Global Times newspaper reported that over 30,000 monks and nuns in China’s Tibet Autonomous Region have now been tested on Chinese laws and regulations in a bid to strengthen “social stability.”

“China is responsible for the thousands of Tibetans who have lost their lives under the Chinese regime,” Dakpo said, adding, “China’s claim that it has ‘democratized’ Tibet is a complete lie.”