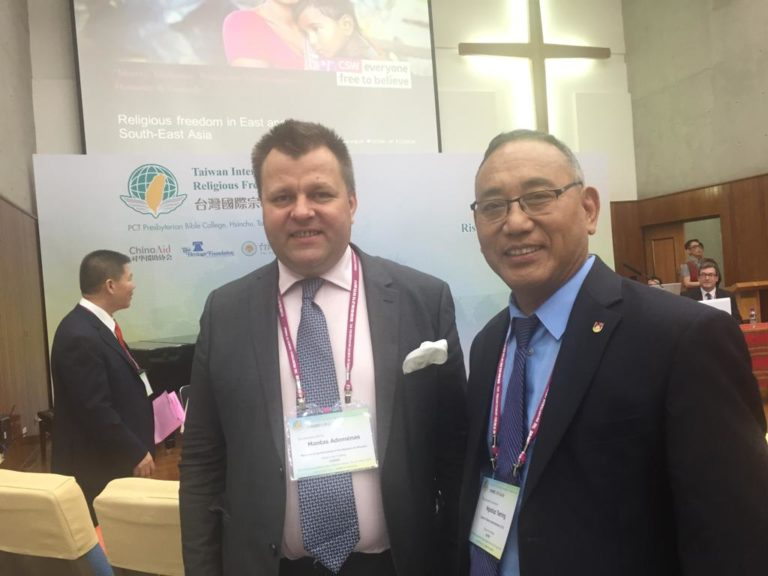 Representative of the Office of Tibet, DC Ngodup Tsering with MP Mantas Adomenas, the author of the letter, at Taiwan International Religious Freedom Forum held in Taipei, May 2019.

Lithuania: In a letter dated December 10, 29 MPs and one member of the European Parliament from Lithuania MP Mantas Adomenas appealed to the Chinese President Xi Jinping to stop the persecution of ethnic and religious minorities. The MPs stated in the letter, they were “profoundly worried by the violent “sinicization” of religions conducted by the Chinese Communist Party, insofar as it places Communist ideology and obedience to the Communist state above the imperatives of faith and conscience and thus violates the autonomy of religious faith, as well as the freedom of religion and conscience, one of the fundamental human rights.”

With regard to Tibet, the MPs protested against the “continuing oppression of the Tibetans and against the deliberate colonization, insofar as these violate human rights and seek to obliterate the traditional faith, way of life, and national identity”.

Representative Ngodup Tsering of the Office of Tibet, Washington DC met MP Mantas Adomenas, the author of the letter, at Taiwan International Religious Freedom Forum held in Taipei in May 2019.

Read the complete letter below.