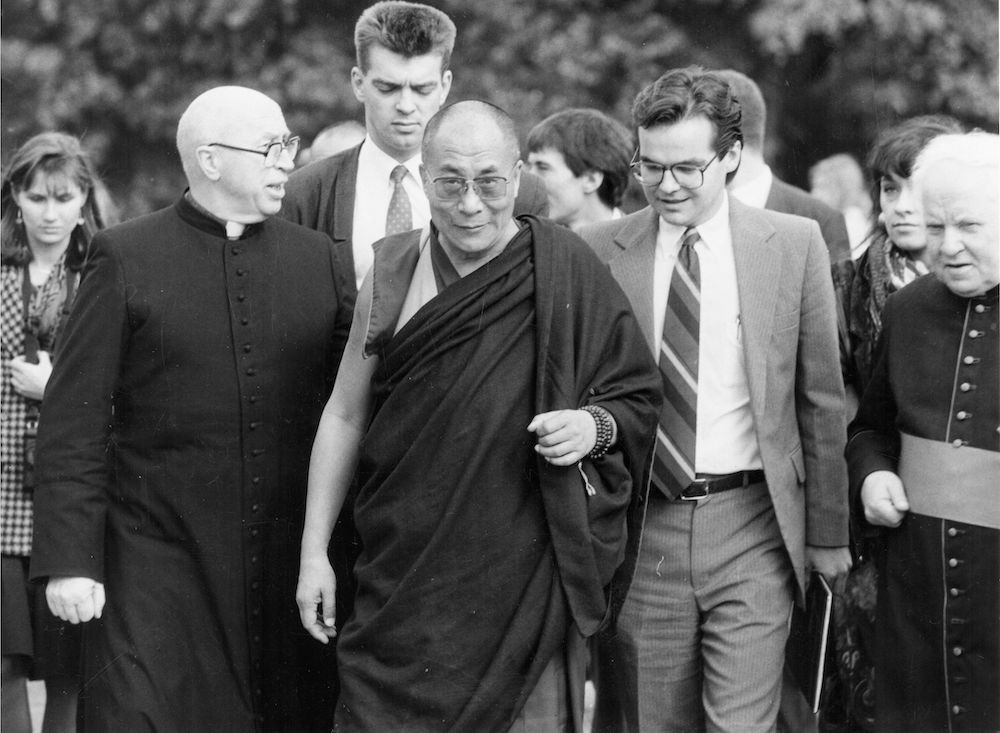 His Holiness the Dalai Lama in Lithuania in 1991.

Prof. Vytautas Landsbergis, the first leader of independent Lithuania remembers “that the visit of the Dalai Lama was first of all more of a moral posture and solidarity, an act of support of our decision” “It was no separatism. It was our right to be ourselves.”

One of the biggest internet portals in Lithuania 15min.lt has posted an interview with Mr. Landsbergis, the first leader of the restored independent state of Lithuania, and Ms. Laima Andrikienė, an MP and a former member of the Commission of the Foreign Affairs. The interview is about the visit of His Holiness the Dalai Lama in Vilnius 30 years ago, on September 28–October 2, 1991.

The first visit lasted four days, the leader of the Tibetan people was welcomed in the Supreme Council–Reconstituent Seimas, delivered a greeting speech to its deputies, met with chairman of the Supreme Council V. Landsbergis as well as with the members of Lithuania’s Buddhist community, the representatives of various other religious confessions, delivered a lecture in Vilnius University, visited some children’s care centres and had a walk in Vilnius.

“In 1991 politically, morally and from the standpoint of human dignity, Lithuania was a very relevant example. In the political context of the time, where routine and conformism had been dominating, we were rebels who showed that to behave in a dignified, respectful and independent way is a necessity. Of course, this first of all was a necessity for us. But all those thinking and sympathizing also accepted and understood our act. One of such persons was his holiness the Dalai Lama,” – said V. Landsbergis.

His visit in autumn of 1991 happened in the quite an unstable political atmosphere of those times. The footage shows how the Tibetan leader walks to the Supreme Council and crosses the defensive part of the barricades left there from the January events. Mr. Landsbergis remembers well that it was an occasion to first officially raise the flag of Tibet in the courtyard of the Supreme Council.

Mr. Landsbergis notes that “our deliverance from the Soviet empire was, first of all, a moral action. We showed the whole world that we have a right to be an independent people and an independent state – and that is a right thing, we never really doubted that. For that reason, the visit of the Dalai Lama was first of all more of a moral posture and solidarity, an act of support of our decision. Back then it was of great importance to us.”

The very fact that the Chinese government has been scornfully calling the Dalai Lama a separatist, according to Mr. Landsbergis, is fine proof that the Dalai Lama and Lithuania has a lot in common: “We were being called names like that back then. It was no separatism though. It was our freedom to be ourselves. Tibet has the same right,” – said the then chairman of the Supreme Council.

Ms. Andrikienė, a member of the then Commission of the Foreign Affairs, says that the Dalai Lama’s speech in the Supreme Council during a Parliament meeting allowed many of Lithuania’s politicians to have a broader view reaching beyond the limits of our country and to hear about Tibet’s problem for the first time.

Asked about the meaning of that visit back then, Ms. Andrikienė noted that back then the Dalai Lama was one of the brightest spiritual and moral leaders in the world, especially after getting the Nobel Peace Prize in 1989. His coming to Lithuania (that had not been on the maps of the world for a long time) immediately fixed the eyes of the world on our country. “We need to see this visit as the Dalai Lama’s hand of support reached out to us and his testimony that he is with us,” – said Ms. Andrikienė.

Asked if during the three decades there have been any signs of solidarity of Lithuania’s politicians with Tibet, Mr. Landsbergis noted that the spirit of Sąjūdis (Reorganization Movement) with time has faded away, yet there is a Tibet support group organized by the politicians that have been active during all those three decades. The professor says: “There are people who still remember our own historical experiences, the burdens of occupation and are able to express their compassion, moral and even political support to those who need it most today.”

“I have always believed that having the experience of occupation and violent silencing we, as a democratic and free country, should give a voice to those who are being silenced by stronger powers, – said Ms. Andrikienė, – the present experience of Belorussia and Ukraine are close and very well known to us. Our political determination concerning those (countries) is well seen. But concerning the issues of Tibet or Taiwan, we have not done enough. Not noticing and keeping silent over those issues is not pragmatics, as many would like us to believe, but cynicism that we will one day have to pay for.”

In the meantime, as Ms. Andrikienė noted, the attitude of the USA, The European Union and Lithuania towards China is changing. An important role has been played by the Silk Road (an economic belt) – a strategy that has opened the eyes of many about the true goals of China.

“For many years we’ve been fed with promises of investments that would be very useful mutually. Yet, later it became clear that China is interested exclusively in strategic objects. Those who are interested in politics know that the Silk Road strategy was born in the militant structures of China. Thus it is not a strategy of economic cooperation but rather a strategy of the world domineering through economics. I am happy that we’ve managed to open our eyes and see this issue from the perspective of national security and haven’t done any irrecoverable steps,” – said Ms. Andrikienė.

The milestone of 30 years from the time of the first visit of his holiness the Dalai Lama was commemorated by a cultural event in the Tibetan Square in Vilnius on 24 of September 2020. All those who love the Tibetan culture came to hear the sounds of gong music and some Buddhist texts. Andrius Zalieska-Zala and Darius Žvirblis, two well-known musicians, presented their music and songs to the audience. 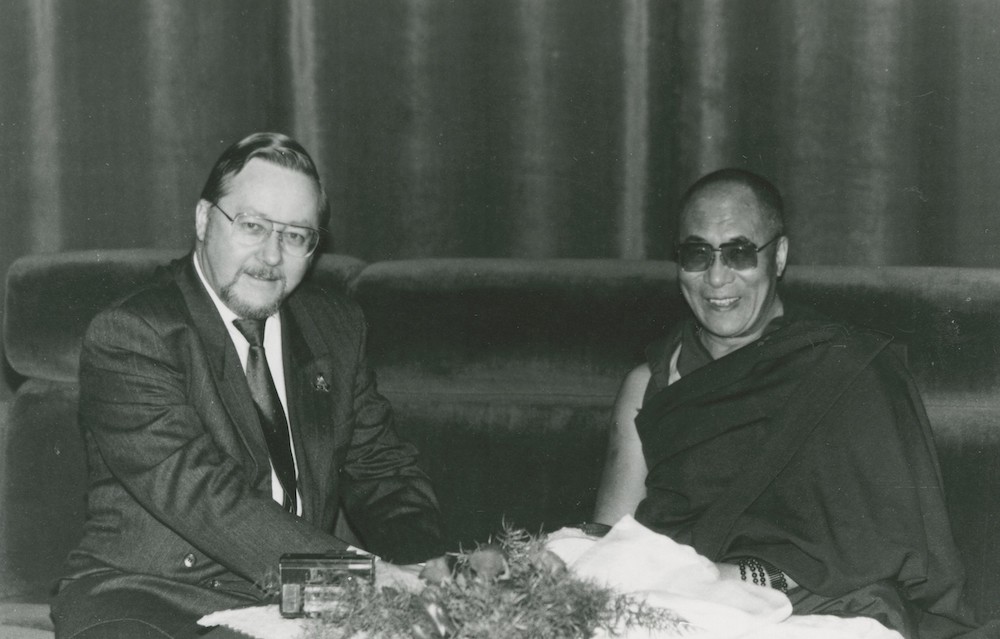 His Holiness the Dalai Lama with Prof. Vytautas Landsbergis.