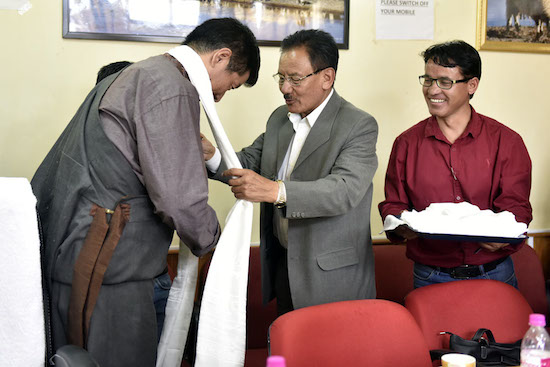 Sonam Dawa Lonpo, the Chief Executive Councillor of the council, received  Dr Lobsang Sangay, President of Central Tibetan Administration upon his arrival at Kushok Bakula Rinpoche airport in Leh on 3 July. The council also hosted a luncheon reception for President Dr Lobsang Sangay and Kalon Phagpa Tsering as honoured guests on Friday, 7 July, in an expression of support and affinity with the Tibetan people.

The Chief Councillor was the guest of honour at the public felicitation of President Dr Sangay organised by the Tibetan community in Ladakh held on July 8.

In his address to the public, the Chief Councillor assured the LAHDC’s full support to the Tibetan people in Ladakh. He promised the council’s commitment and efforts towards the adoption of Tibetan Rehabilitation Policy Act in Jammu & Kashmir, particularly in Ladakh with a substantial number of Tibetan inhabitation.

Sonam assured LAHDCs support for Indian Central Government’s housing project for Changthang. He also said “for the last 41 years, I have received audience with His Holiness the Dalai Lama and have immense respect for him.”

President Dr Sangay spoke about the rich historical and cultural bond shared by the people of Ladakh and Tibet. He urged the state authorities for the implementation of the Tibetan Rehabilitation Policy 2014 in the state which he said would help authorities in Ladakh to work efficiently and effectively towards the betterment of Tibetans in Ladakh.

Dr Sangay spoke about Kashag’s Five-Fifty vision that seeks to achieve genuine autonomy for the Tibetan people within the next five years while also signaling to the Chinese government that it has the ability to survive for the next 50 years in exile if needed.

Tseten Wangchuk, Chief Representative Officer of Sonamling Tibetan Settlement thanked the Chief Coucillor for his efforts to ameliorate the situation and bring about institutional support for the welfare and well-being of Tibetan residents in Ladakh. 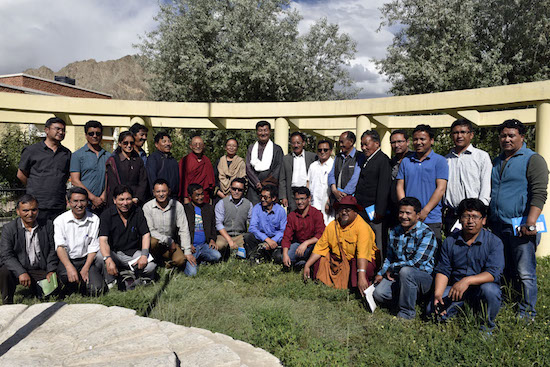