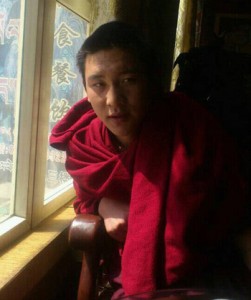 DHARAMSHALA: Lobsang Lungrik, a twenty-year-old monk from Kirti monastery in Ngaba (incorporated into China’s Sichuan province) was forcibly detained by Chinese authorities on 26 December, according to Kanyag Tsering and Lobsang Yeshi, two monks from the Kirti monastery based in exile.

The reason for Lobsang Lungrik’s detention or where he is being detained at is currently unknown, they said.

Lobsang Lungrik hails from the 5th village in Meuruma township. He joined Kirti monastery as a child and was currently enrolled in the monastic school.

A 21 year old Tibetan monk from Kirti monastery was severely beaten and arrested following a lone protest against the Chinese government on 26 December.

He was arrested a few minutes afterwards by Chinese police and was severely beaten.

The severe beatings attracted a lot of sympathetic onlookers, but the onlookers were dispersed by police.

Losang Trinley is from division 4 of Me’ruma pastoral area in Ngaba, son of father Norden and mother Choksum. He joined Kirti monastery at a young age, and is now studying in the logic class.