Kashag’s Statement on the 59th Anniversary of Tibetan Democracy Day 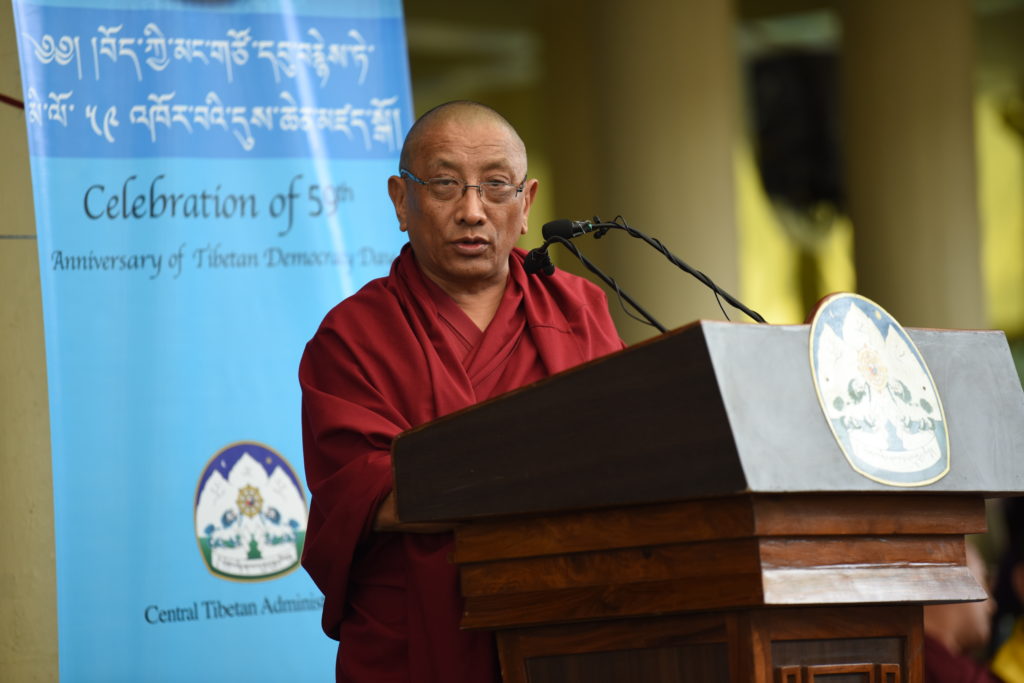 Kashag’s Statement on the 59th Anniversary of Tibetan Democracy Day

His Holiness the Dalai Lama has been an ardent advocate of democracy and has strived hard to establish a democratic system of governance in Tibet and later in exile. The intrinsic belief and commitment of His Holiness in the democratic ideals were evident from a very young age. Soon after assuming political leadership, His Holiness set up a Reform Committee and brought about many changes in the Tibetan administrative system. The efforts of His Holiness to transform Tibet into a vibrant democracy was thwarted with Tibet’s invasion by the Chinese government, forcing the pioneer of Tibetan democracy into exile.

Despite tremendous challenges of rehabilitation and preservation of Tibetan culture in exile, His Holiness continued his efforts to democratize the Tibetan system of governance. Soon after arrival in India, His Holiness counseled to set up an elected body leading to the establishment of the Commission of Tibetan People’s Deputies, the first elected representative body which took oath on this day back in 1960. In 1961, a synopsis of the draft democratic constitution for future Tibet which was based on the principles of modern democracy and Tibetan values was circulated amongst the Tibetan people for eliciting their views. At the insistence of His Holiness, this draft constitution included impeachment provision of even the Dalai Lama which emulates his farsighted vision and his faith in democracy. Later, in 1963 a comprehensive draft democratic constitution was promulgated which brought several changes to the system of governance including annulment of all hereditary titles and prerogatives and paved way for the appointment of government officials through democratic means.

His Holiness outlined further proposals to give more representation to women, to include representatives from the Tibetan diaspora in Western countries, and to expand the membership of the assembly. In 1991, the Charter of the Tibetans-in-Exile was adopted by the Tibetan Parliament-in-exile and enacted by His Holiness. With the full-fledged Tibetan parliament-in-exile and the Kashag (Cabinet), and the Tibetan Supreme Justice Commission set up the following year, the establishment of the three pillars of democracy was completed.

Since its inception, the Tibetan democracy has evolved under the leadership of His Holiness. In 2001, His Holiness declared his status as semi-retired and called for the first direct election of the Kalon Tripa, the executive head of the Central Tibetan Administration (CTA). His Holiness’ vision to fully democratize the Tibetan polity was realized in 2011 when His Holiness announced the devolution of all his political power to the democratically elected political leader.

His Holiness’ overseeing of the Tibetan polity into a democratic system and leading the Tibetan movement onto a path of non-violence is admired and acknowledged around the globe, including by many scholars from mainland China. It is solely due to the vision and leadership of His Holiness that has enabled the Tibetans to preserve and revive the distinct culture, making the Tibetan community in exile one of the most robust and flourishing exile communities in the world.
The recent high-level US Congressional delegation visit to the CTA led by Congressman David Price and Vern Buchanan expressed their admiration at the evolution of Tibetan democratic polity and assured their support for the Tibet cause. Congressman David Price stated in his address that the democratic system of the Central Tibetan Administration helps them understand the aspirations of Tibetan people and that “Tibetan system of democracy is inspiring to all those who believe in democracy worldwide.”

As we celebrate the democracy bestowed upon us by His Holiness, it is of utmost significance that we take up the responsibilities that come along with the rights. As pioneers of democracy-in-exile, we should responsibly discharge our civic duties and be mindful in exercising our rights including the right to freedom of speech and expression. Therefore, the Kashag urges the Tibetans to remain observant and to commit to playing a constructive role in the democratic process.

As we celebrate our democracy-in-exile, we should also remember the grim situation today inside Tibet. We have the privilege of living in a democracy with all the rights, but the Tibetans inside Tibet continue to be persecuted, and their human rights continue to be violated since the invasion. At the beginning of last year, China’s Public Security Bureau in the so-called Tibetan Autonomous Region (TAR) issued a notice declaring activities such as initiatives for environmental protection, language preservation and expressing support for the Middle Way Approach as “illegal.” On the one hand, the Chinese leaders often say they are open for dialogue while on the other hand, Tibetans supporting the Middle Way Approach, which fosters dialogue, are called “separatist” and persecuted. The notice also urged the people to spy on each other and to inform about such “illegal activities” carried out by the “underworld forces.” In a notice issued earlier this year, the Public Security Bureau raised the rewards for informers from a 15,600 US dollars to over 40,000.

The rampant cultural and religious persecution in Tibet including the demolition of Buddhist academies and forcible removal of monks and nuns which continues to this day forced the world to call-out China on its discriminatory practices against Tibetans. Just a couple of months back, more than 7,000 monks and nuns were forcibly evicted from Yachen Gar Buddhist Academy situated in Tibet’s Karze region and nearly half of the Yachen Gar Buddhist Complex has been demolished. The so-called atheist China’s interference in Tibetans’ Buddhist traditions, including recognizing reincarnated Tulkus has outraged the conscience of Tibetans and the international community.

This year during the Tibetan Uprising Day, leaders and Members of Parliaments from 11 nations, and a 47-member Chinese delegation representing different organizations across the world totaling around 80 guests attended CTA’s official commemoration ceremony here in Dharamshala. On this historic gesture of solidarity, the chief guest, Ian Khama, the former President of Botswana while expressing his solidarity said, “Our own presence here today is a testament to the fact that while the March 10 patriots were physically defeated, the spiritual struggle for a free Tibet lives on in the hearts and minds not only of Tibetans at home and in exile but also among growing numbers within the international community.”

Earlier this year, Members of Parliament from 13 countries attended the 7th World Parliamentarians’ Convention on Tibet held in Latvia and expressed their support and solidarity for the rights of the Tibetan people.

Taking this opportunity, the Kashag would like to thank all the individuals, organizations and governments who have supported the just cause of Tibet. We also thank the central and state governments of India and most importantly the people of India for all their support towards the promotion of Tibetan democracy-in-exile. We firmly believe that you all will continue to stand with us until the day Tibet issue is peacefully resolved.
As part of the democratic process, the Kashag and the Tibetan parliament-in-Exile will be convening the Third Special General Meeting of Tibetans from 3rd to 5th October. The meeting will discuss and gather public opinion on the “Relationship between the lineage of the Dalai Lamas and the Tibetan people and the Five-Fifty vision.” Considering the significance of the themes of the meeting, the Kashag urges all the Tibetan people for their active participation and share their opinions.
Lastly, we pray for the good health and long life of His Holiness the great 14th Dalai Lama and may all his wishes be fulfilled. May the just cause of Tibet soon be resolved.