Kalon Tripa Speaks to The Pioneer: China must learn to be rational 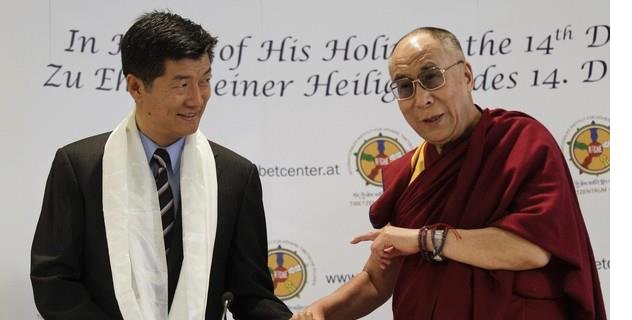 Prime Minister of the Tibetan Government-in-Exile Lobsang Sangay believes the faith and determination of Tibetans who are fighting for their rights in the face of Beijing’s might, will eventually triumph. India, he adds, can do more for his people’s cause

Filling in the shoes, or well sandals, of the Dalai Lama without first having returned from the dead is no easy task. But India-bred, Harvard-educated law professor Lobsang Sangay has managed to do exactly that in this past one year that he has been the Kalon Tripa or Prime Minister of the Tibetan Government-in-Exile. In an exclusive interview to The Pioneer, the political successor of the Dalai Lama, speaks of his gruelling first year governing a country he has never visited. He talks of his own journey from a refugee camp in Darjeeling through the hallowed corridors of Harvard Law School to the monastery in Dharamsala; the trials and tribulations of being an elected representative, the democratic implications of separating the office of the political leader from that of the spiritual leader and much more. Excerpts:

You have just completed your first year as the Kalon Tripa. What were the challenges you faced and what would you list as your main achievements?

After 16 years in the US, where I was an academic at Harvard Law School, moving here and adjusting in Dharamsala was a challenging job in itself.  Domestically, the cases of self-immolation in these past months have been painful and I have strived to keep the Tibetan spirit and sense of solidarity alive. Then there is, of course, the Chinese Government that everybody is trying to understand and analyse. Administratively also there have been challenges. Even though I have a small Administration of just about a 1000-plus members, still, when a new guy comes in, it requires some re-adjusting.

When His Holiness the Dalai Lama devolved all his political powers last year, there was a lot of anxiety among the people. Who is this guy coming from nowhere? But in this one year’s time, that anxiousness has lessened considerably.

Now, that the Dalai Lama is no longer actively involved in Tibetan politics and diplomacy, how has that affected the Tibetan movement?

Earlier, His Holiness was both spiritual and political leader, and given his stature, prominence, popularity and acceptance, he performed both roles admirably well. But after that the question was, ‘Who am I trying to fill in his shoes?’ Who knows me? No one. So, I had to create my own space and raise the profile of my office. But because of His Holiness’s goodwill, friends of Tibet have welcomed us with open arms.

Within the Tibetan community, earlier decisions were a lot easier to implement because they had the Dalai Lama’s endorsement. There was little criticism. Now, I don’t have that shield. So, there is more scrutiny but overall there has been more acceptance as well.

Has the separation of the offices of the political and spiritual leaders led to greater democratisation of the Tibetan movement?

Democracy was always part of His Holiness the Dalai Lama’s vision. He often told us that when he attended the People’s National Congress in China in 1954, he saw elderly leaders dozing off even as member after member would read out long speeches. Yet, every piece of legislation was unanimously approved.

But then in 1956, when he came to India, he went to Parliament here and saw the raucous, noisy deliberations and the shouting matches, and immediately decided that, ‘Yes, this is what I like.’

So, since 1959, Tibet has had a People’s Parliament. It’s just that with the Dalai Lama being both spiritual and political leader, it was camouflaged. Still, there have been many reforms. Most importantly, in 2001, direct elections were held for the office of the Kalon Tripa, which at that time was only administrative in profile. Then on August 8, 2011, the Dalai Lama said that he was handing over political authority to the democratically elected Lobsang Sangay.

How has the transition been for you from a Tibetan refugee to a professor of law to a politician?

I grew up in a remote refugee camp on one acre of land in Darjeeling. I went to a refugee school and ate dal bhaat every day. No machli. But we always had a sense of serving the community. It was enforced at home and at school but of course I had not expected to be Kalon Tripa. Even as late as 2010, I was focussed on my programmes at Harvard Law School. I hardly ever ventured to Kennedy school where future leaders were being groomed. Only in Spring 2010, when election talk was going on, did I begin auditing classes on leadership and communication.

At the time there was valid criticism that how could this guy, who had never worked even as a bureaucrat at Dharamsala, was not even a Member of Parliament, just parachute from America and become Kalon Tripa? But I decided to give it my best shot.

I won the preliminary election and then 10 days before finals, the Dalai Lama announced that he would devolve power. I had only 10 days to decide if I wanted to become the political successor of the Dalai Lama. But I am a Tibetan. And I always had this sense that I would dedicate my life to the cause of Tibet.

You spoke of the challenge of facing self-immolation cases. How has your administration handled these tragic incidents?

You know, a leader’s position is a lonely one. As a journalist, you can report about it. As an academic, you study it. As a human being, you can sympathise about it. But as a leader, you have to do something about it. We have made repeated requests against self-immolations. We actively discourage it. In fact, we do not even encourage protests inside Tibet given the harsh consequences. But once the protest takes place or some one does self-immolate, it becomes our duty to show solidarity for their aspirations.

Also, one must ask why are they protesting like this? Because there is no space for conventional protests. Yes, they are desperate, but they are so determined to bring freedom to Tibet.

Do you think China’s growing power will make it less amenable to reform?

If China thinks irrationally, then yes. But if China thinks rationally, it should solve the problem of Tibet. The Chinese Government spends more on internal security than on external defence. Which other country does this? A major portion of that security money is spent on Tibet, on the militarisation of the long India-China border, on maintaining tight security in Lhasa where there are check points everywhere. So much to ensure a ‘harmonious society’!

Also, China spends billions of dollars to promote soft power through  Confucius Institutes and events like the Olympics. But when you handle Tibetans like this, it negates all of that effort. If China solves the Tibetan problem, not only will it save billions of dollars, it will generate soft power for itself. It is in China’s interest to resolve the problem.

Do you think growing commercial ties between India and China will force New Delhi to re-balance its equation between Beijing and Tibet?

Do you have any expectations from New Delhi?

I grew up in India. I was educated in an Indian school subsidised by the Indian Government. I owe a lot to India which has done more for the Tibetan movement than any other country. I am hesitant to ask for more. Obviously I want to see India do more, but I will not ask for it.