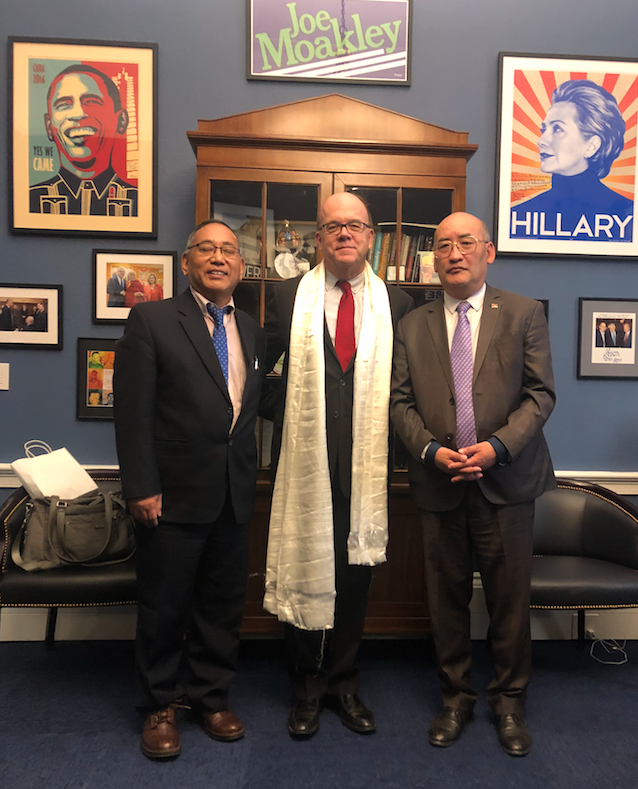 Kalon Phagpa Tsering described the symposium organized by the Chinese scholars, highlighting His Holiness’s success in 60 years of exile and its productive outcome to Mr. McGovern. He then thanked Mr. McGovern for his endless support to Tibet and taking the initiative to introduce Reciprocal Access to Tibet in the House of Representatives.This new law has tremendously encouraged Tibetans inside and outside Tibet.

Introducing the situation in Tibet, Mr. Phagpa Tsering emphasized on series of self-immolations and endangerment of Tibetan culture and language under the current Chinese policy in Tibet. He once again expressed his gratitude that Tibetans have toward the American government as well the Indian government for their continued support to Tibet during such critical time.

On Mr. Phagpa Tsering’s ardent request to Mr. McGovern about visiting either Tibet or Dharamsala, Congressman McGovern shared the consideration of delegation’s visit which he expressed is feasible under House Speaker Nancy Pelosi’s term.

While touching upon the challenges of Tibetans facing in exile, Kalon described the poor situation of Tibetan diasporas, especially in Nepal. Mr. McGovern affirmed that the concerns of Tibetans in Nepal are being taken care of by the US consulate general in Nepal. He will follow up on this matter with the consulate in Nepal to seek improvement in the situation. Mr. McGovern also assured that he will be continually working for Tibetan issue with his engagement in the Congressional-Executive Commission on China.

Minister and congressman also touched upon the responsibilities of the security department of the Central Tibetan Administration and a few other topics. After a series of talk, the meeting concluded with the presentation of the white scarf to Mr. McGovern followed by showing Mr. Phakpa Tsering a photo of His Holiness and congressman when His Holiness visited Washington a few years ago.