Could Beijing’s ruling elite succumb to the same fate as those in the former Soviet Union? Perhaps. 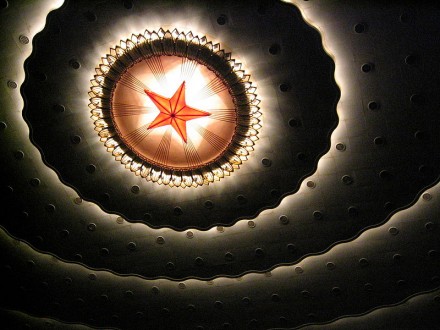 Last Friday’s announcement in Beijing that the ruling Chinese Communist Party (CCP) will convene its 18th congress on November 8 has brought much relief to those concerned that political scandals and power struggle at the very top of the Chinese government have derailed the once-in-a-decade leadership transition.  Finally, the party’s top leaders seemed to have agreed on what to do with the disgraced former Chongqing party boss Bo Xilai (likely off to jail) and on whom to promote to the Politburo and its more powerful standing committee.

For all the obvious reasons, China’s ruling elites will do their best in the next few months to project an image of unity and self-confidence, and to convince the rest of the world that the next generation of leaders is capable of maintaining the party’s political monopoly.

That is, unfortunately, a tough sell.  Confidence in the party’s internal cohesion and leadership has already been shaken by the Bo affair, endemic corruption, stagnation of reform in the last decade, a slowing economy, deteriorating relations with neighbors and the United States, and growing social unrest.  The questions on many people’s minds these days are how long the party can hold on to its power and whether the party can manage a democratic transition to save itself.

These questions are by no means the products of idle minds.  By many measures, the party’s rule is about to enter a decade of systemic crisis.  Having governed China for 63 years, the party is approaching, within a decade, the recorded longevity of the world’s most durable one-party regimes — the former Communist Party of the Soviet Union (74 years), the Kuomintang (73), and the Revolutionary Institutional Party of Mexico (71).   Like a human being, an organization such as the CCP also ages.

In addition, China’s rapid economic development has thrust the country past what is commonly known as the “democratic transition zone” — a range of per capita income between $1000 and $6000 (in purchasing power parity, PPP).  Political scientists have observed that autocratic regimes face increasing odds of regime change as income rises.  Chances of maintaining autocracy decrease further once a country’s per capita income exceeds $6000 (PPP).  China’s has already reached $8500 (PPP).  And nearly all the autocracies in the world with a higher per capita income are petro-states.  So China is in an socioeconomic environment in which autocratic governance becomes increasingly illegitimate and untenable.  Anyone who is unconvinced of this point should take a look at Chinese Weibo (or microblogs) to get a sense of what ordinary Chinese think of their government.

Thus, the answer to the question of the durability of one-party rule in China is clear: its prospects are doomed.

The answer to the question of how a one-party regime can manage its own political transformation to save itself is more interesting and complicated.

Essentially, there are two paths for such regimes: the Soviet route to certain self-destruction, and the Taiwan-Mexican route to self-renewal and transformation.

Since the fall of the Soviet Union, top CCP leaders have resolved not to repeat the Soviet tragedy.  Their policy has been, therefore, resisting all forms of political reform.  The result is, unfortunately, an increasingly sclerotic party, captured by special interests, and corrupt and decadent opportunists like Bo.  It may have over 80 million members, but most of them join the party to exploit the pecuniary benefits it provides.  They themselves have become a special interest group disconnected with Chinese society.  If the fall of the Soviet Communist Party (CPSU) offered any real lessons, they are definitely not the official Chinese narrative that Gorbachev’s political reforms brought down the party.  The sad truth is: the Soviet regime was too sick to be revived by the mid-1980s because it had resisted reforms for two decades during the rule of Brezhnev.  More importantly, the CCP should know that, like the millions of the members of the CPSU, its rank and file are almost certain to defect in times of a regime crisis.  When the CPSU fell, there was not a single instance of loyal party members coming to the defense of the regime.  Such a fate awaits the CCP.

That leaves the CCP with only one viable option: the Taiwan-Mexican path of self-renewal and transformation.  The one-party regimes in Taiwan and Mexico are, without doubt, the most successful ones in transforming themselves into multi-party democracies in the last quarter century.  Although the stories of their transition to democracy are different and complex, we can glean four key insights into their successes.

First, leaders in Taiwan and Mexico confronted a legitimacy crisis in the 1980s and realized that one-party regimes were doomed.  They did not deceive themselves with illusions or lies.

Second, both acted while their regimes were stronger than the opposition and before they were thoroughly discredited, thus giving them the ability to manage a gradual transition.

Third, their leaders centralized power and practiced inner-party dictatorship, not inner-party democracy, in order to overcome the opposition of the conservatives within the regime.  In one-party regimes, inner-party democracy will surely lead to an open split among the ruling elites, thus fatally weakening the a reformist regime’s ability to manage the transition.  Additionally, making the entire political system more democratic, mainly through competitive elections in cities and states, will provide the ruling elites an opportunity to learn a critical skill: seeking support from voters and winning elections.  Such skills cannot be learned through the dubious exercise of inner-party democracy, which is simply another name for elite bargaining and manipulation.

Fourth, a moderate democratic opposition is the best friend and greatest asset a reformist one-party regime has.  Such an opposition is a negotiating partner and can help the regime maintain transitional stability.  It can also offer much better terms protecting the interests of the ruling elites and even helping them avoid jail.

When we look at the rewards reaped by the KMT and the PRI, they included not only favorable terms for exiting power (except for President Salinas, who was forced into exile because of corruption), none of the senior leaders faced criminal prosecution.  Most importantly, both the KMT and PRI managed to recapture the presidency, the seat of political power in both countries, after spending two terms in opposition.

But can the CCP actually learn from the KMT or the PRI?

So the task for China’s new rulers is truly daunting.  Their first order of business is actually not to plunge into a Gorbachev-style political perestroika, but the de-totalitarianization of the Chinese state and the transformation of the CCP into another KMT or PRI.  Without taking this intermediate step immediately, the CCP may find that a Soviet-style collapse is its only future.