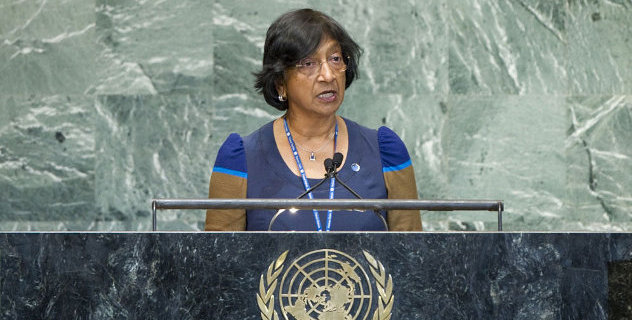 GENEVA (2 November 2012) – United Nations High Commissioner for Human Rights Navi Pillay on Friday urged Chinese authorities to promptly address the longstanding grievances that have led to an alarming escalation in desperate forms of protest, including self-immolations, in Tibetan areas.

The UN human rights chief said she was disturbed by “continuing allegations of violence against Tibetans seeking to exercise their fundamental human rights of freedom of expression, association and religion,” and pointed to “reports of detentions and disappearances, of excessive use of force against peaceful demonstrators, and curbs on the cultural rights of Tibetans.”

Cases have included a 17-year-old girl who was reportedly severely beaten and sentenced to three years in prison for distributing flyers calling for Tibet’s freedom and the return of the Dalai Lama. Others have been sentenced to between four and seven years in prison for writing essays, making films or distributing photos of events in Tibet outside China. Serious concerns have been raised about fair trial standards, and the torture and ill-treatment of detainees.

“I have had several exchanges with the Chinese Government on these issues. But more needs to be done to protect human rights and prevent violations,” Pillay said. “I call on the Government to respect the rights to peaceful assembly and expression, and to release all individuals detained for merely exercising these universal rights.”

The High Commissioner also appealed to Tibetans to refrain from resorting to extreme forms of protest, such as self-immolation, and urged community and religious leaders to use their influence to help stop this tragic loss of life.

“I recognise Tibetans’ intense sense of frustration and despair which has led them to resort to such extreme means,” she said, “but there are other ways to make those feelings clear. The Government also needs to recognise this, and permit Tibetans to express their feelings without fear of retribution.”

The High Commissioner urged the Government, as a confidence-building measure, to allow independent and impartial monitors to visit and assess the actual conditions on the ground, and to lift restrictions on media access to the region. She noted that there are 12 outstanding requests for official visits to China by UN Special Rapporteurs on various human rights issues, including one by the Special Rapporteur on freedom of religion and belief. During the Universal Periodic Review of China’s human rights record before the UN Human Rights Council, the State pledged to step up cooperation with Special Procedures. Pillay called on the Government to facilitate their access.

“Social stability in Tibet will never be achieved through heavy security measures and suppression of human rights,” she said. “Deep underlying issues need to be addressed, and I call on the Government to seriously consider the recommendations made to it by various international human rights bodies, as well as to avail itself of the expert advice being offered by the UN’s independent experts on human rights.”

Among the recommendations made by international human rights bodies to the Government of China on Tibet are the following:

– UN Special Rapporteur on the right to food, Olivier De Schutter, recommended a suspension of non-voluntary resettlement of nomadic herders, who make up the majority of the Tibetan population, and called for a meaningful consultation.

– The UN Committee on the Elimination of All Forms of Discrimination (CERD) recommended to China that any policies or incentives offered that may result in a substantial alteration of the demographic composition of autonomous minority areas be reviewed. CERD also recommended that the State party carefully consider the root causes of the unrest in March 2008, including inter-ethnic violence, and the reasons why the situation escalated.

– The UN Committee Against Torture in November 2008 recommended that China conduct a thorough and independent inquiry into events surrounding the protests in March 2008, including the reported excessive use of force against peaceful demonstrators, notably monks, in Kardze county, Ngaba county, and Lhasa; and into allegations of torture and ill-treatment against those arrested and detained.

“My office also stands ready to assist constructively on these issues in the region and promoting best practices from around the world with regard to protection of minorities,” Pillay added.