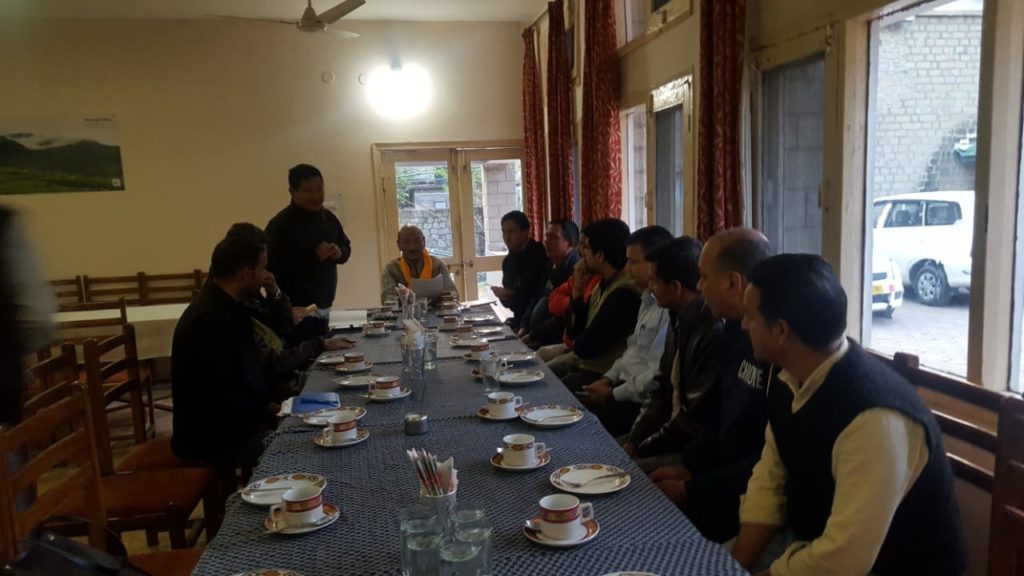 Meeting with the Members of ITFA, DAG, Rewalsar. Photo/ITCO

Rewalsar: A series of meeting amongst Indian Tibet Support Groups members was convened, from 6 to 8 November, on the heels of the recently concluded 8th International Tibet Support Groups Conference. Having chaired as Chief Guest at Inaugural Session, Drafting Committee and Concluding Session followed with addressing of Press Conference at 8th ITSG conference held at Dharamshala, and now for the re-strengthening of Indian TSGs, Shri. R. K. Khrimey then arrived late night at Circuit House, Mandi on 5th November 2019.

Next day, at the invitation of Dzigar monastery, Rewalsar, after a short spell of 4 hours of sleep, Shri. Khrimey ji attended the funeral ceremony of Ven. Wangdor Lama who passed away in September 2019. After paying homage, Sh. Khrimey visited the places near around the sacred lake and cave of Rewalsar trying to understand the relevance of the sacred site and to engage into knowing the cultural and traditional bond of fabric amongst the local Indians and Tibetan refugees who are settled for many decades with innumerous purposes.

During the second half of the day, the members of Indo Tibetan Friendship Association (ITFA), Development Action Group (DAG) and Vyapar Mandal met at the Convention Hall of Tourist Bungalow, HPTDC, Rewalsar to discuss about the existing relation amongst the Indian and Tibetan people, ways to engage more interaction to reconsolidate the relation and to promote more harmony and message of coherence amongst different interest groups.

Addressing the meeting, Shri. R. K. Khrimey shared the deliberations and discussion that took place during 8th ITSG. Particularly, he stated about the Eight Action Plans those were indicated in the resolution for the follow-up. Among those he specifically, mentioned about Chinese immoral and unauthentic threat of acceptance of His Holiness the Dalai Lama’s reincarnation only to be chosen by the People’s Republic of China. He also conveyed the CTA’s planning of attributing 2020 as the year of Thank You His Holiness the Dalai Lama. While commenting upon the perseverance of relationship amongst local Indians and Tibetans, he appreciated the continuous bond of relation shared by both the communities of Rewalsar which can be an example for others to implement.

In addition to the Buddhist pilgrimage site, Rewalsar also being a tourist place holds immense significance in carrying out small initiatives that bring forth the plight of Tibet and its future existence. ITCO coordinator cited the reference of the recent visit of Chinese President to Mahabalipuram in October when these occasions can be utilized for staging the voices by Indian Tibetan support groups. He also thanked the members for showing unconditional support for all these years.

Followed by this, on 7th November, Indian Tibet Support Group Members representing India Tibet Friendship Association, Mandi met with Sh. Khrimey at Rang Mahal Hotel. After a brief introduction amongst the participants, Sh. Tenzin Namgyal stated the purpose of the meeting and its expectation.

Sh. Khrimey ji not only expressed the appreciation for all their long-standing relationship and support but urged to engage in some different programs every year that may rejuvenate the essence of its relation. Additionally, he also requested to bring out more youth’s participation in this movement as they may then renew the flame of Tibbat Mukti Sadhna.

After the conclusion of this meeting, on the same day, travelling a distance of almost 100 km from Mandi, Sh. Khrimey ji then convened a second meeting with Indian Tibet Support Group Members at Joginder Nagar. Within this Sub-Division, the area popularly known as Bir is nestled with three Tibetan Settlements as Bir Botsok Tibetan Society, Bir Dege and Bir Nangchen Chauntra.

Ms Pema Youdon, in her introductory remark, welcomed Sh. R. K. Khrimey and others on behalf of all the Tibetans in that region. Not only this, Sh. Khrimey was also honoured with a presentation of Tibetan Thangka for his steadfastness on the issue of Tibet. Sh. Khrimey then began his address with urgency to engage more into the promotion of Tibet awareness initiatives as time is running out indispensably. He shared the focal points of recently held International Tibet Support Groups in Dharamshala and conveyed that the declaration of the resolution shall be sent with Hindi translation to all the members for a further action plan that may take place in the days to come.

Bir being an internationally known spot for paragliding, he lamented that the foreigners while enjoying the paragliding sport they may also be informed about the challenges of Tibetan people facing inside Tibet and the aspiration of Central Tibetan Administration. He appreciated the existing harmony between the local Indians and Tibetan people and emphasized that the stories of these fifty years of exile in India also needs to be told and retold especially to the youngsters.

Sh. Pankaj Jamwal, President, ITFS; Sh. Vikas Sood, Gen Sec. ITFA; and Sh. Dhani Ram Thakur, ITFA participated during the meeting. Sh. Pankaj Jamwal, in his address, recounted of the experiences that they cherished from each other. He specifically mentioned that there has not been a single occasion that he had missed whenever a meeting was called within due notice. Even then, he ensures fuller support for any kind of interaction that may embolden the issue of Tibet both locally and globally.

The meeting was then concluded with a couple of Q & A from the participants. 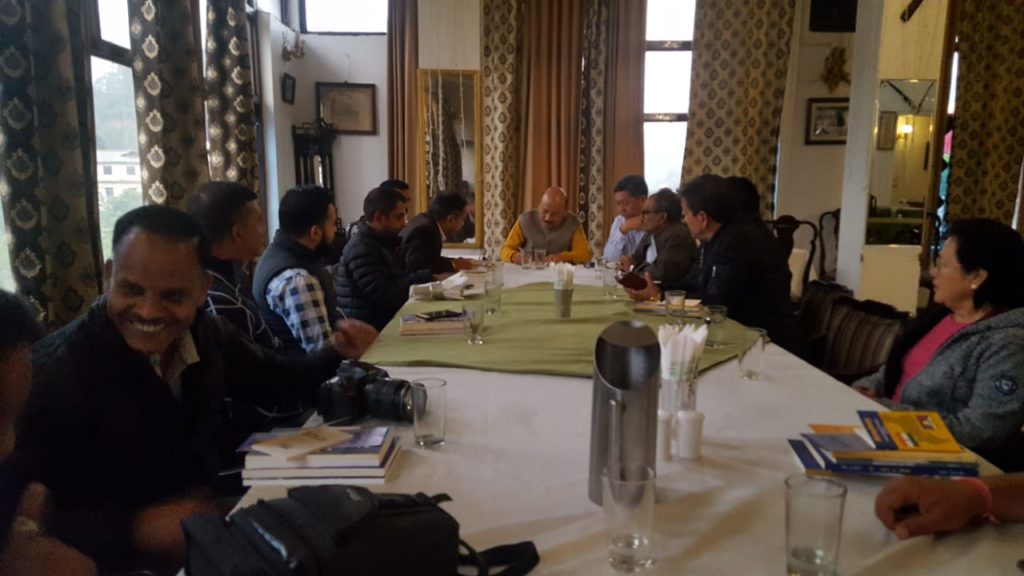 Meeting with Members of ITFA and BTSM Mandi. Photo/ITCO 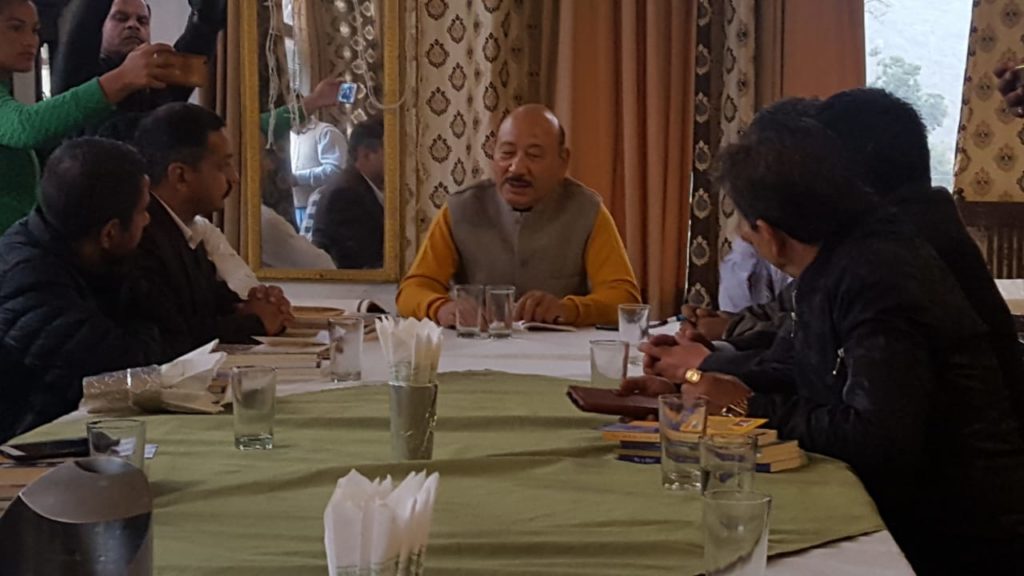 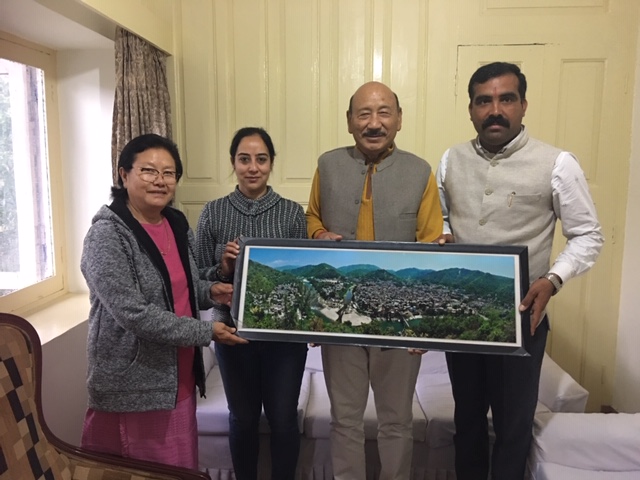 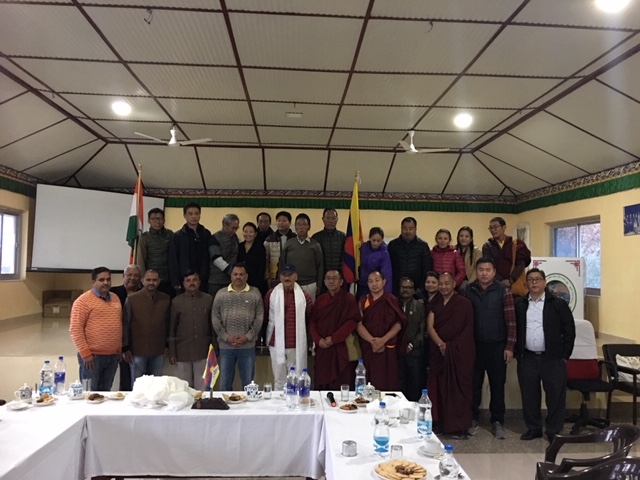