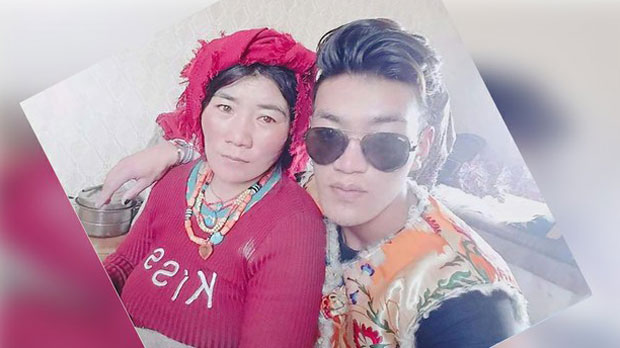 Tibetan protester Wangchen and his aunt Acha Dolkar are shown in an undated photo. Photo courtesy of RFA

Dharamshala: In yet another example of China’s heavy-handed employment of law enforcement to crackdown on peaceful acts of protest and targeted attempts to muzzle free expression, a Tibetan youth and his aunt from Sershul in Tibet’s Karze were handed prison terms of four and half years and one year and three months respectively for observing a peaceful act of prayer and for sharing information connected to the act.

According to latest reports surfacing from Tibet, the Sershul County People’s Court in Sichuan’s Karze yesterday sentenced a young Tibetan named Wangchen to four and half years in prison on charges of “leading a conspicuous protest in public against the law of the land”.

Wangchen’s aunt Acha Dolkar was sentenced to one year and three months imprisonment on charges of “leaking state secrets” and “endangering the welfare of the state”.

According to experts on China and human rights, charges of “leaking state secrets” are commonly used by Chinese legal institutions to violate people’s right to privacy, freedom of expression and information and specifically to detain Tibetan and Uighur dissidents.

Wangchen, along with three others were detained by the local Chinese police on their return to the base of the hill.

During the hearing at Sershul court on 7 May, Wangchen was seen walking unsteadily, leading some observers to believe he had been tortured in custody. No one was allowed to get close to him to look for signs of trauma, RFA reports.

“We don’t know where Wangchen and his aunt were taken after they were sentenced, and his family were not allowed to provide lawyers to represent him in court,”  sources confided to RFA.

The source reportedly confirmed that Sershul county is currently under tight lockdown and heightened surveillance.

The three others namely Lobsang, Yonten and a third who only witnessed Wangchen’s peaceful act without taking part were detained as Wangchen’s accomplice and as of latest reports, Lobsang and Yonten were each fined 15,000 yuan (US $2,211) and ordered to attend political re-education classes on “issues of national security” for six months.