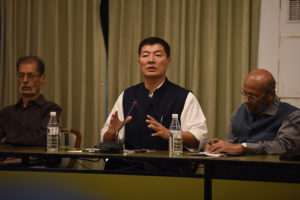 Delhi: A group of 15 foreign affairs journalists representing various newspapers of India such as Asian Age, The Print, The Tribune, and The Wire etc. to name a few were gathered for an interactive session with the President of Central Tibetan Administration Dr. Lobsang Sangay who was invited as the chief guest to deliver the 7th annual lecture of the Indian Association of Foreign Affairs Correspondents at India International Centre, New Delhi on 6 August 2019.

“China’s incursion is happening on a daily basis through political, security, education, and social interferences”, said President Sangay while narrating his 7 years of experience and expertise on China as the Sikyong of Tibetan administration in exile. Speaking further, President said Tibet is the prime testament of China’s unprecedented influence and incursion. He noted that China is now using similar blueprint in Australia, Africa as a matter of fact everywhere it seeks to promote its interest. President Sangay cited an example of Australia where China’s influence in the country began from a trade deal and resulted in China gaining upper hand in influencing the country’s political sphere, education, and security spheres to say the least. This is well documented on Four Corners by ABC. President then cited example of Norway and mentioned that a country so rich in a budget surplus failed to interpret the disguise of China and decode its true motive beyond trying to win the goodwill of China when the bilateral relations between the two nations completely halted after the Norwegian Nobel Committee awarded the Nobel Peace Prize to Chinese dissident Liu Xiaobo. Norway through its desperate pursuit to win back China finally succeeded to resume the bilateral deals after the death of Liu Xiaobo.

“So the story corresponds directly to what Tibet has to say because whatever is happening now has already happened in Tibet 60 years ago,” said President Dr. Lobsang Sangay remarking on China’s same old tactic to capture the influence makers, elite, and business tycoons and influence them for its personal gain.

As for the situation inside Tibet, President Sangay pointed out that Freedom House Index report lists Tibet as the second least free country in the world for three consecutive years after Syria.

President also spoke on One belt One Road initiative, a major global development strategy adopted by China and commented the initiative is nothing but a sophisticated way of China subjugating and colonizing rest of the world as he noted Tibet was once staging ground for the ambitious initiative. President alerted that the world must learn from Tibet’s tragic experience not to get caught up in the trap of China’s development aid.

Following the lecture delivered by the President, an interactive Q/A session ensued between the journalists and President Sangay where President was asked on various topics ranging from conferment of Bharat Ratna to His Holiness the Dalai Lama to Doklam issue to President Sangay’s being not invited for PM Modi’s second term swearing-in ceremony. Questions were also raised on the recent controversy on His Holiness reincarnation and Tibetan identity in millennial etc.

Speaking on the conferment of  Bharat Ratna to His Holiness the Dalai Lama, President said it was the collective wish of the longtime Indian friends of Tibet to award His Holiness with the prestigious award but as far as Tibetan government in exile and the Tibetans stands are concerned, not causing any sort of inconvenience for India has always been the approach.

“We don’t comment on the internal affairs of India. We only seek genuine autonomy through peaceful resolution where the issue of Tibet is concerned” reiterated the President.

“Even when posters of China-picked Panchen Lama is not acceptable to the people of Tibet then how can they accept China chosen Dalai Lama?” asserted President Sangay.

President Sagay was then asked if the younger generation Tibetans deal with the issue of identity crisis being born and brought up in India. Answering the question, President explained that though the younger generation of Tibetans in exile has pretty well adapted to the culture and tradition of India they are still very much rooted in their own culture and tradition. He informed about the evolution of the academic curriculum in Tibetan schools prioritising the Tibetan language as the medium of teaching and learning at schools. He also noted that the Tibetans have sincerely adopted the cultural practices and traditions followed in Tibet.

As for preserving religion is concerned, President Sangay denoted that not only the Tibetans in exile but the Tibetans living in Tibet are preaching and practising the original Buddhism in secrecy that was inspired by the ancient Nalanda tradition of India.

“So when it comes to spirituality, we have already won the battle”.

President Dr. Lobsang Sangay diligently answered the questions raised by the media persons and concluded his lecture with a clarification that all ‘Tibet seek is genuine autonomy within China’.

The interactive session was convened by Vijak Naik, the convener of Consulting Editor at Sakal Papers Ltd. based in Maharashtra. 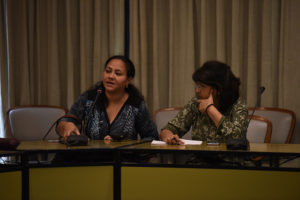 A journalist asking a question to President Dr. Lobsang Sangay during the interactive session. Photo/Tenzin Jigme/CTA. 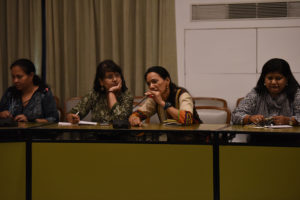 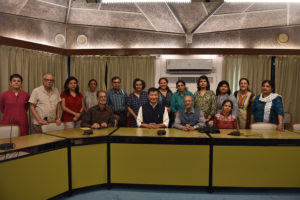