His Holiness the Dalai Lama’s Birthday Celebrated Across Russian Federation

Moscow: On 6 July for the first time since the covid-19 pandemic began, followers and supporters of the Dalai Lama gathered at Moscow Cinema House to celebrate the Tibetan spiritual leader’s 87th birthday. Save Tibet Foundation and the Center for Tibetan Culture and Information (Office of Tibet) prepared the Russian premiere of a new documentary “Never Forget Tibet. The Dalai Lama’s Untold Story,” which presents the story of Dalai Lama XIV’s departure from Tibet. The film shows a warm meeting of the Buddhist spiritual leader with writer and presenter Rani Singh and her uncle – former Indian political officer Har Mander Singh, who met the Dalai Lama at the border of Tibet and India back in 1959. The film of the British director Jean-Paul Mertinez also speaks about the importance of preserving the religious, cultural and material heritage of Tibet and the role of the Dalai Lama in the development of the Tibetan community. The film was translated into Russian and dubbed by Save Tibet Foundation.

At the beginning of the program Tibetan monks living in Moscow recited a short prayer for the auspiciousness and prosperity of the world and for the long life of His Holiness. Then the guests watched a video message by Telo Tulku Rinpoche, the Dalai Lama’s honorary representative in Russia, Mongolia and CIS countries who is currently in India, attending the initiations by His Holiness the Dalai Lama. Telo Tulku Rinpoche stressed that such meetings have become a good tradition and expressed his joy that like-minded people, committed to the ideas of compassion and peace in the world, once again gathered at the Great Hall of the Cinema House. He urged everyone to pray that Russian Buddhists may meet His Holiness the Dalai Lama again as soon as possible, to be in his presence and receive his blessings, guidance and inspiration that we all need in these very difficult times. 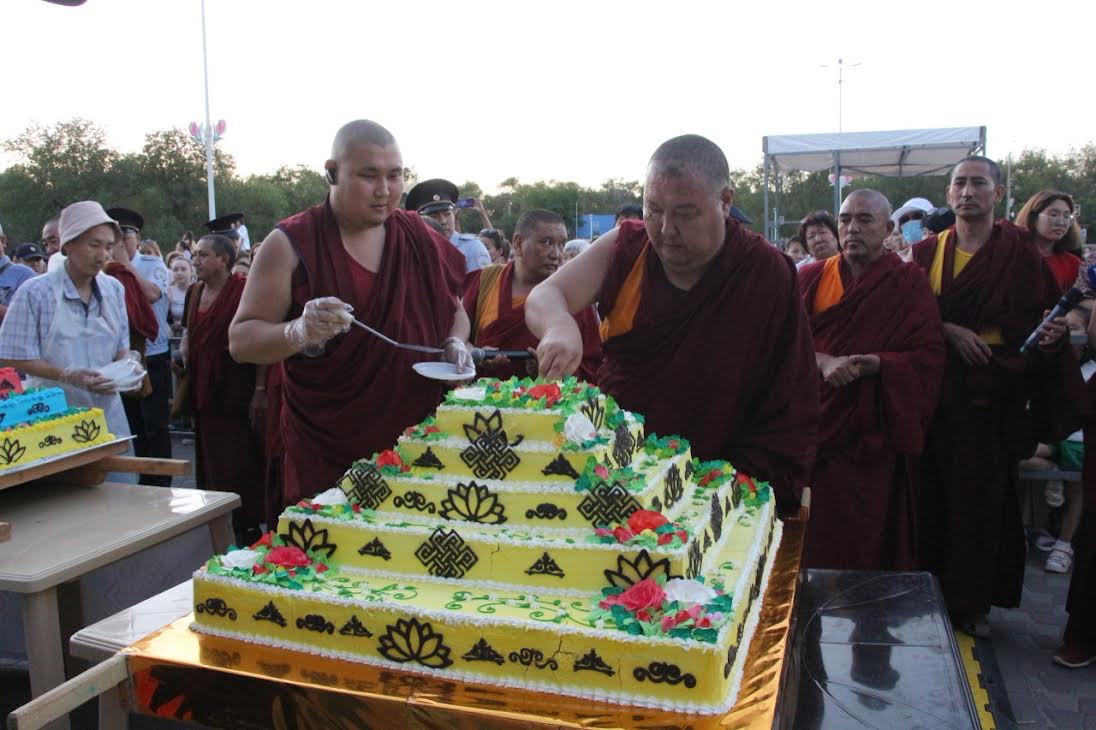 Monks in Kalmykia Distribute cake to the public

The famous Russian musician Boris Grebenshchikov, who had on many occasions attended teachings of His Holiness the Dalai Lama for Russian Buddhists in Riga and made musical offerings to His Holiness, also sent a short video message wishing His Holiness a very happy birthday. The program also included a trailer of a new documentary film by Roman Sukhostavsky (Save Tibet Foundation), “Happiness,” filmed during His Holiness’ teachings for Buddhists of Russia, which took place in Dharamsala in May 2019. The film premiered online on the same day on the website savetibet.ru.

After the program concluded the guests, some 900 people including Russian scientists who had met with His Holiness the Dalai Lama within the framework of the Dialogue Between Russian and Buddhist Scholars Project, were not in a hurry to leave. They exchanged impressions about the film “Never Forget Tibet,” and gladly took the opportunity to talk with friends whom they had not seen for a long time.

His Holiness the Dalai Lama’s birthday was also celebrated in the Russian republics where Tibetan Buddhism is traditionally practiced. In Kalmykia, Buryatia and Tuva buddhists prayed for the long life of their spiritual leader, artists performed national songs and dances, birthday cakes were cut. On the occasion of the Dalai Lama’s birthday the State Archives of Buryatia prepared an exhibition of archival documents and photographs depicting His Holiness’ visits to Buryatia in 1979, 1982, 1986 and 1991.

The celebration of His Holiness’s birthday in Russia will continue next week with the screening of the film “Never forget Tibet” on July 12 in Saint-Petersburg. 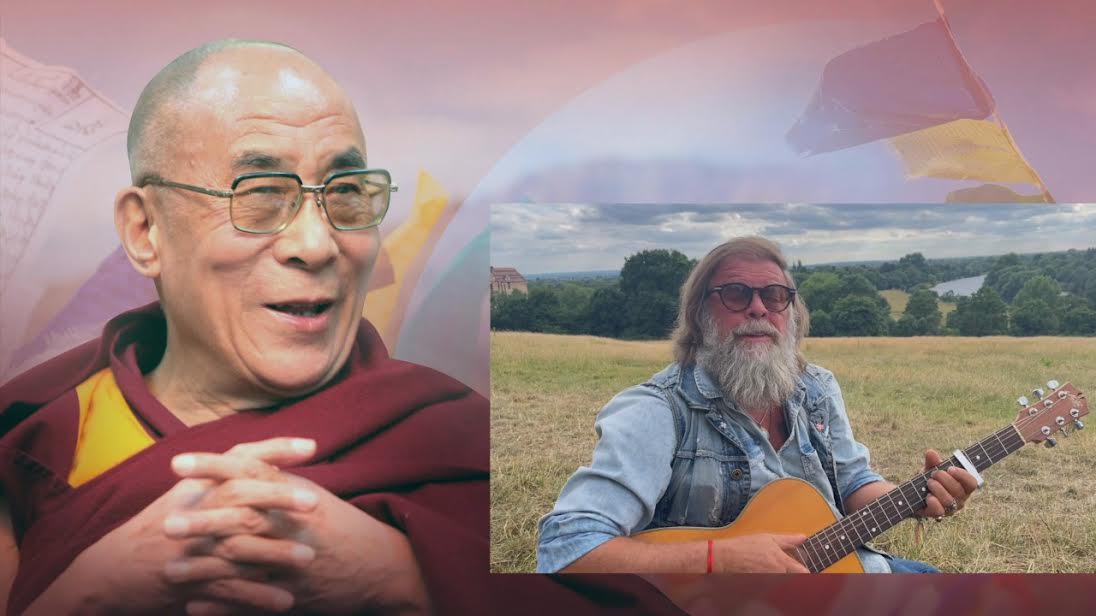 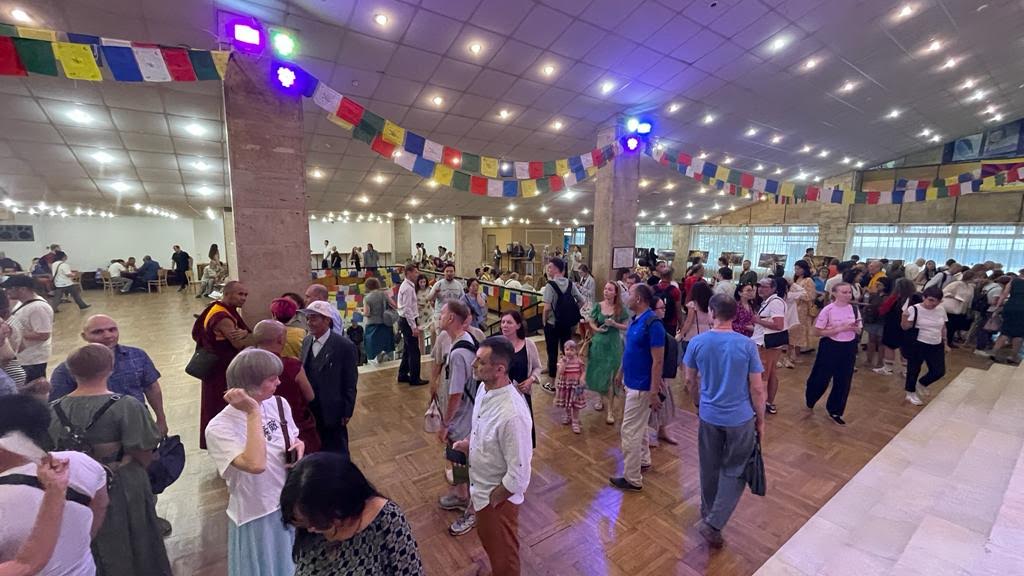 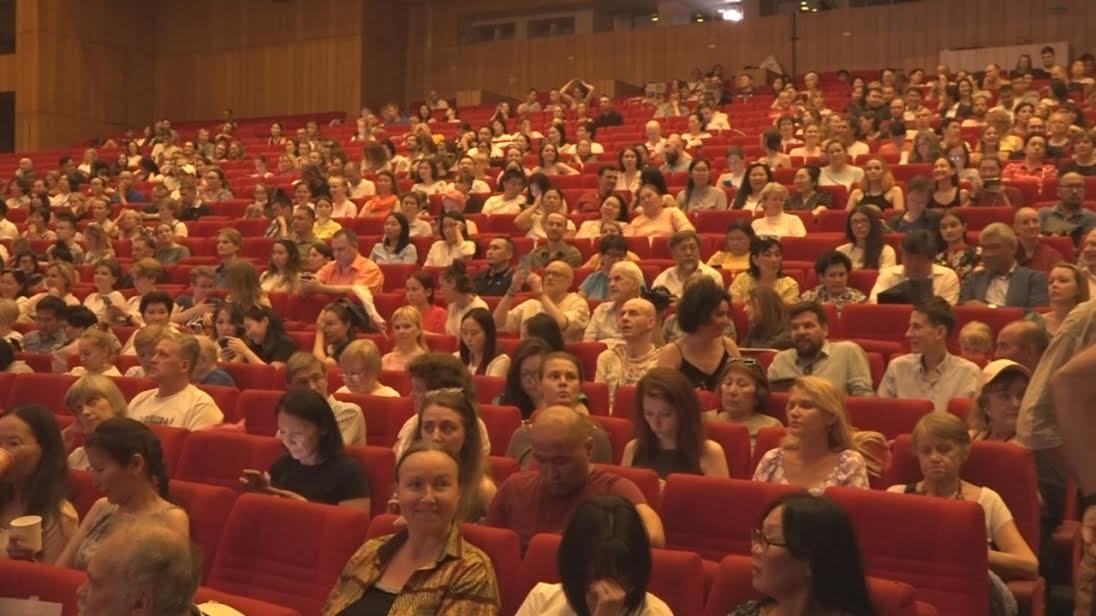