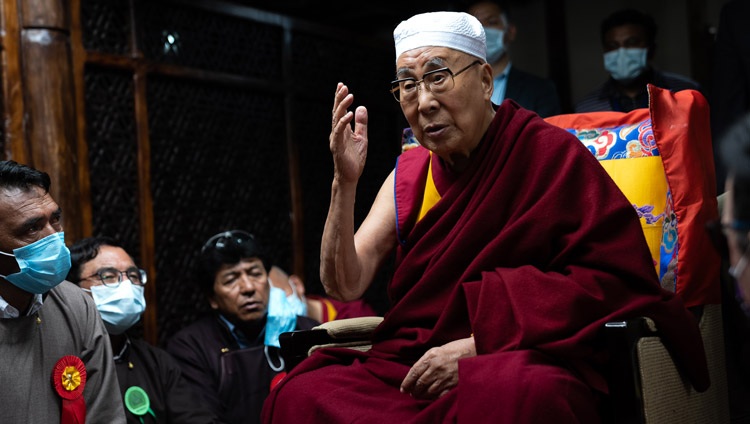 Shey, Leh, Ladakh, India, 17 August 2022: The Ladakh Muslim Coordination Committee Leh, Ladakh UT, hosted a reception at Shah-e-Hamdan, Masjid Sharif, Shey this morning in honour of His Holiness the Dalai Lama. He was welcomed by leaders of both the Sunni and Shia communities, following which the local Imam offered a prayer.

Before the main function, His Holiness offered prayers at the Masjid Sharif, which was built in 1482, close to where the main function was held. His Holiness then greeted the members of the congregation, who included representatives of various religious communities, the elected leadership of the Ladakh Autonomous Hill Development Council (LADHC), and members of the local Muslim community.

His Holiness told them that he is always pleased to meet with his Muslim brothers and sisters. He recalled that many Muslims lived in the vicinity of his birthplace in north-east Tibet and that consequently he was familiar with the daily pattern of Muslim prayers. As a young and lively child his play mates including many Muslim children and they all got along well together.

“Later, when I reached Lhasa,” he explained, “Tibetans and the small Muslim community in the city enjoyed good, friendly relations. They were consistently invited to attend all the festivals observed by the Tibetan government as a mark of respect. Most were merchants who imported goods from India, but they also fulfilled another important role when they brought news and information from the outside world.

“During my visit to China 1954-55 I met with several Chinese leaders including Chairman Mao. The last time I met him, before I was to return to Tibet, Mao complimented me by saying I had a scientific mind. He gave me advice about how to lead, but finally confided that “religion is the opium of the people”.

“As things have turned out, my ‘scientific turn of mind’ has meant that I have engaged in extensive exchanges with scientists about the workings of the mind and emotions ways to achieve peace of mind. 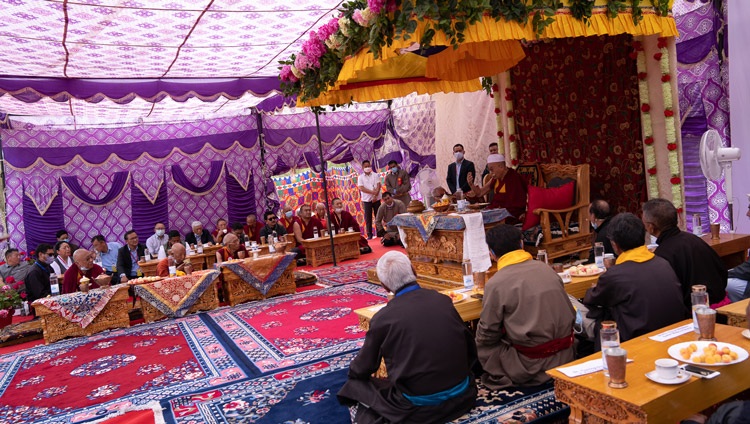 His Holiness the Dalai Lama speaking to members of the Muslim community at Shah-e-Hamdan, Masjid Sharif in Shey, Leh, Ladakh, UT, India on August 16, 2022. Photo by Tenzin Choejor

“As a Buddhist monk,” His Holiness continued, “I have been able to make contact with Buddhists from other countries, followers of both the Sanskrit and Pali Traditions.

“Basically, we are all the same in wanting to be happy and lead meaningful lives. In addition, although our various religious traditions assert different philosophical points of view, their common purpose is to encourage their followers to be warm-hearted.”

His Holiness stated that because it is focussed predominantly on material goals, modern education is inadequate when it comes to developing peace of mind. He observed that if modern education were combined with the long-standing Indian principles of compassion— ‘karuna’ and doing no harm— ‘ahimsa’ it would be much more complete. Mahatma Gandhi taught about ‘ahimsa’ in terms of non-violence, and his approach to resolving disputes has been adopted in many parts of the world. Many conflicts that arise out of anger, fear and jealousy can be resolved if we cultivate compassion for others.

For hundreds of years, people in the Himalayan region, from Ladakh in the west to Arunachal Pradesh in the east, have shared a common spiritual tradition, a culture of compassion, with the people of Tibet. It is a tradition that originated in the profound Buddhist culture that derives from the historic Nalanda Tradition. We are all striving to keep it alive. His Holiness declared that he is touched by the deep sense of faith and trust people in the Himalayan regions display towards him.

“Tibetans have faced significant hardship for more than six decades,” he observed, “and yet we have managed to keep our culture alive, while the spirit of Tibetans spirit has remained unflinching.”

His Holiness expressed deep appreciation of the way Muslims and Buddhists live in close harmony with each other in Ladakh, for which he thanked them. He ended by declaring that the people of Ladakh have long been close to his heart. 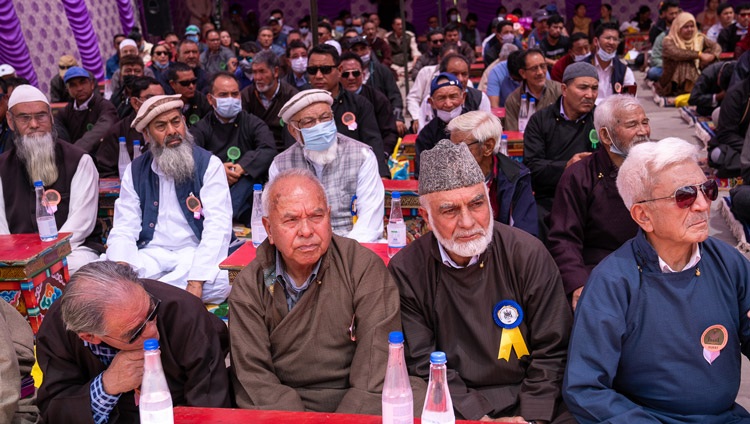 Members of the Muslim community listening to His Holiness the Dalai Lama speaking at Shah-e-Hamdan, Masjid Sharif in Shey, Leh, Ladakh, UT, India on August 16, 2022. Photo by Tenzin Choejor