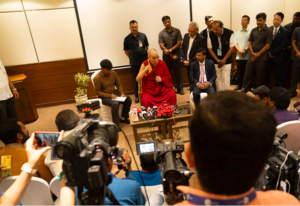 His Holiness the Dalai Lama meeting with media representatives in Aurangabad, Maharashtra, India on November 23, 2019. Photo by Tenzin Choejor

Aurangabad, Maharashtra, India – His Holiness the Dalai Lama flew from Delhi to Aurangabad yesterday at the invitation of the Lokuttara International Bhikkhu Training Centre. He last visited the city more than 40 years ago in May 1978. This morning, before leaving for the Centre, he met briefly with media representatives.

He wished them a good morning and told them he was looking forward to meeting people while he is here and exchanging ideas.

“I usually describe myself as a messenger of Indian thought,” he told them. “I believe India’s long-standing traditions of ‘ahimsa’—non-violence and ‘Karuna’—a compassionate attitude, are very relevant to today’s world. That’s why I talk about them whenever I can. Also, because of ‘ahimsa’, India is a country where all religions live together amicably. I not only admire this example but am committed to promoting inter-religious harmony.

“Once, at a large meeting in Ladakh a local imam declared that while Muslims had a clear devotion to Allah, they also need to show love to all the creatures of Allah. 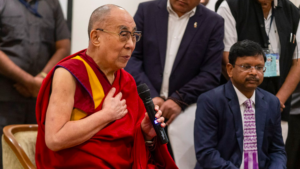 His Holiness the Dalai Lama speaking to members of the media in Aurangabad, Maharashtra, India on November 23, 2019. Photo by Tenzin Choejor

“My body, born in Tibet, is Tibetan, but my mind, filled with knowledge rooted in ancient India, is more Indian than some of the modern Indians I meet. I am convinced that a greater appreciation of ‘ahimsa’ and ‘Karuna’ can be achieved through education. So, my first commitment is to promote more compassionate humanity.

“I’m looking forward to meeting followers of the Theravada tradition today. Any questions?” 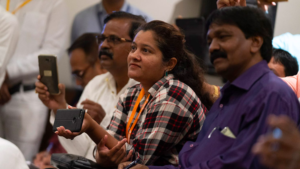 Members of the media listening to His Holiness the Dalai Lama during their meeting in Aurangabad, Maharashtra, India on November 23, 2019. Photo by Tenzin Choejor

Asked about the Karmapa Rinpoché, His Holiness replied that he didn’t know what he was doing now, but that he’s a very good person who pays close attention to his studies. The Karmapa is an important spiritual teacher, he added, but it’s not so much the individual we need to rely on. Although there are no reincarnations of the Buddha or Nagarjuna, studying what they taught is what counts. Most important is developing warm-hearted compassion.

Invited to comment on Dr Ambedkar’s role, His Holiness recalled that he started his movement to revive Buddhism in India in Nagpur in 1956. His Holiness noted approvingly that Ambedkar was all for equality in society and opposed the caste system.

As to the contribution the Bhikkhu Training Centre can make, His Holiness pointed out that the Buddha was a teacher. What’s more, he encouraged his followers not to accept what he taught just out of respect for him, but after investigating and examining it the way a goldsmith tests gold. 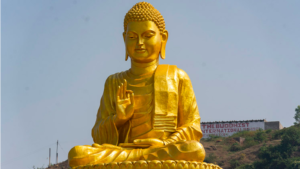 A view of the golden Buddha statue at the Lokuttara International Bhikku Training Center in Aurangabad, Maharashtra, India on November 23, 2019. Photo by Tenzin Choejor

The clear, blue sky was strewn with mare’s tail clouds as His Holiness drove north-east out of the city to the Lokuttara Mahavihara, the Bhikkhu Training Centre founded by Venerable Bodhipalo Mahathero. A senior Bhikkhu was there to welcome him as he arrived. He escorted him to the foot of a colossal golden Buddha statue, whose hand mudras indicate teaching and meditation. His Holiness bowed his head and spent some moments in prayer and reflection. Next, he planted a Bodhi tree and in an adjacent temple again paid his respects before the statue of the Buddha.

More than 150 Bhikkhus sat on the floor of the Training Centre to listen to His Holiness. Dr Harshadeep Kamble requested the Abbot, Ven Bodhipalo Mahathero to welcome His Holiness, Mahanayaka Thero from Sri Lanka and a senior Mahathera from Thailand. He offered them white shawls and flowers. Dr Kamble announced that since the Training Centre was completed a year ago, two groups of Bhikkhus have trained there.

Ven Bodhipalo Mahathero welcomed his guests and celebrated His Holiness’s presence as a blessing for the Indian Buddhist community. He said it didn’t matter whether monks belonged to the Theravada, Mahayana or Vajrayana traditions, they were welcome. He declared that monks should be optimistic. What they had to do was understand and practise. Coming together, as Buddhists are doing for the present three-day Global Buddhist Congregation, is the need of the time. It will result, he said, in a revival of the Buddha’s teachings. He acknowledged Dr Ambedkar’s reintroducing Buddhism to modern society, as well as his efforts to make India strong. 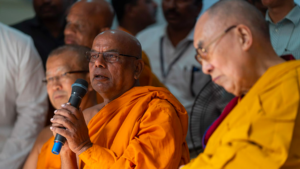 The Abbot of the Lokuttara Mahavihara, Ven Bodhipalo Mahathero. welcoming His Holiness the Dalai Lama and guests to the Training Centre in Aurangabad, Maharashtra, India on November 23, 2019. Photo by Tenzin Choejor

“We all experience true suffering, but only human beings have the intelligence to be able to understand its cause. It is important not only to understand what true cessation of suffering would be like but also that it is possible to attain it. Ultimately, the cause of suffering is ignorance, holding a mistaken view of reality. The path, on the other hand, is to understand reality. Along with that, we need to know that the mind is pure and that the mental afflictions that cloud it are not part of the mind and can be eliminated. We need to understand that it is possible to attain cessation in the context of dependent arising—pratityasamutpada. 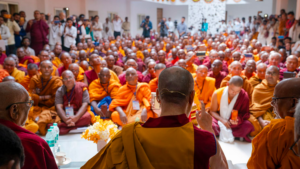 His Holiness the Dalai Lama speaking to more than 150 Bhikkus and guests at the Lokuttara International Bhikku Training Center in Aurangabad, Maharashtra, India on November 23, 2019. Photo by Tenzin Choejor

“Shamatha, the practice to develop a calmly abiding mind, a concentrated mind, and vipashyana, insight into reality are found in common with non-Buddhist traditions. However, what is unique about the Buddhist approach is that it leads to insight into the idea that there is no independent self separate from the body and mind.

“In the Nalanda Tradition, the Mind Only and Middle Way views of reality are similar to the view of quantum physics. That is to say that external things don’t exist as they appear. Ignorance is based on appearances and is an acceptance that the way things appear is the way they exist. Quantum physics mostly examines external things but stresses the crucial role of the observer. However, only Buddhism has examined the observer.

“You can see my body and you can hear my voice, but you don’t know where my sense of ‘I’ is.

“When the Buddha first taught at Sarnath, he explained ethics, concentration, and wisdom— ‘Shila’, ‘shamatha’ and ‘vipashyana’, which correspond to the three collections of teachings— ‘Vinaya’, ’Sutra’ and ‘Abhidharma’. These are the foundation of his teaching. Ethics corresponds with the discipline of the Sangha community, the Bhikshus, Bhikshunis, Upasakas and Upasikas. 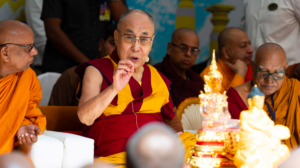 His Holiness the Dalai Lama speaking at the Lokuttara International Bhikku Training Center in Aurangabad, Maharashtra, India on November 23, 2019. Photo by Tenzin Choejor

“When it comes to cultivating a calmly abiding mind, we need to recognise the obstacles to concentration, such as laziness, dullness, and excitement. Within wisdom, there are subtler and coarser levels of understanding selflessness.

“The Buddha’s second round of teachings at Rajgir was given to a more selected audience. They were recorded in Sanskrit, the language of the educated. There he taught the perfection of wisdom, that nothing exists as it appears. In the third round of teachings, also recorded in Sanskrit he discussed the subtle mind that understands ‘shunyata’—the emptiness of independent existence.”

His Holiness talked about how the Buddha had been a prince, who left his family and became a bhikshu. His first five disciples became bhikshus like him because it’s easier to make mental progress if you observe the ethics of a monk or nun. His Holiness observed that the Buddha accorded equal opportunities to men and women in conferring both the Bhikkhu and Bhikkhuni vow. The Buddha spent six years practicing meditation in austere conditions, deepening his understanding until all ignorance was eliminated and he became a Buddha. From this, we learn that ethics is the foundation of practice. So, I’m pleased to know that you are taking active steps here to secure the Bhikkhu Sangha.

His Holiness explained that the Buddha entrusted the care of the Dharma, especially the upholding of the Vinaya, to Mahakashyapa, who was followed by Ananda, Shanavasika, Upagupta, Dhitika, Krishna, and Sudarshana. Due to disagreements, 18 schools of thought emerged. Of the four major orders of Vinaya, Theravada, Mahasanghika, Mulasarvastivada and Sammitya, today, Theravada, Mulasarvastivada, and Dharmagupta survive. The Pali and Sanskrit Pratimoksha codes of discipline are essentially the same, differing over small points of detail.

“It is wonderful that you are paying special attention here to training Bhikkhus.”

Finally, His Holiness explained three levels of knowledge. The first is acquired by listening or reading but tends to be easily deflected by other points of view. The second involves reflection and analysis and entails penetrating the meaning. The third level concerns deepening understanding yet further by familiarizing yourself with what you’ve understood in meditation. This leads to insight.

His Holiness then joined the elder monks for lunch, before returning to his hotel in Aurangabad. Tomorrow, he is to give a public talk.