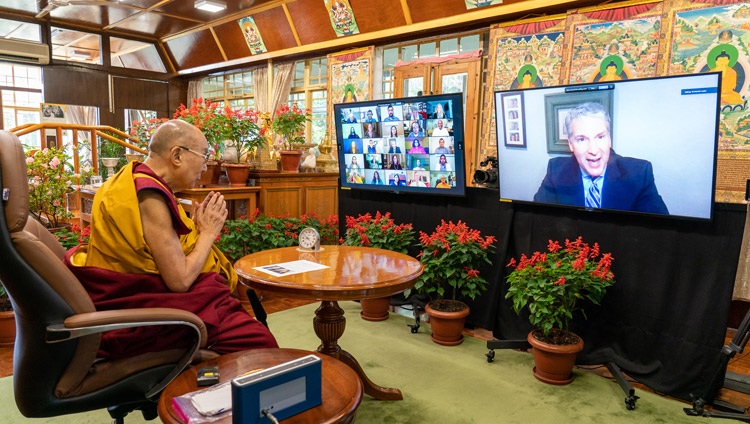 Dr Patrick Leahy, President of Monmouth University, New Jersey welcoming His Holiness the Dalai Lama on the start of their online conversation on about the interconnectedness of happiness, health, well-being, and the future of earth on September 22, 2021. Photo by Ven Tenzin Jamphel

Dharamshala:  Dr Patrick Leahy, President of Monmouth University, New Jersey this morning welcomed His Holiness the Dalai Lama to a conversation about the interconnectedness of happiness, health, well-being, and the future of earth. He told him that students and teachers at Monmouth were inspired to lead happier, healthier, and more compassionate and harmonious lives – for the benefit of generations to come on earth.

His Holiness responded with thanks for the opportunity to talk about peace and happiness.

“And yet human beings can also be trouble makers. For thousands of years we have fashioned different kinds of weapons. We sometimes refer to weapons as tools for peace, but in fact the only purpose of a weapon is to hurt and kill. A world without weapons would be much more peaceful.

“We invest energy and effort in building ever more complex systems of weapons. Then we talk about peace, disregarding the fact that weapons contribute nothing to the achievement of real peace.

“Our world today is heavily interdependent. In the past, we tended to be concerned only with people in our own locality. Nowadays, new challenges like the climate crisis and global heating that affect us all, as well as the operation of the global economy, mean that we must take the whole of humanity into account. 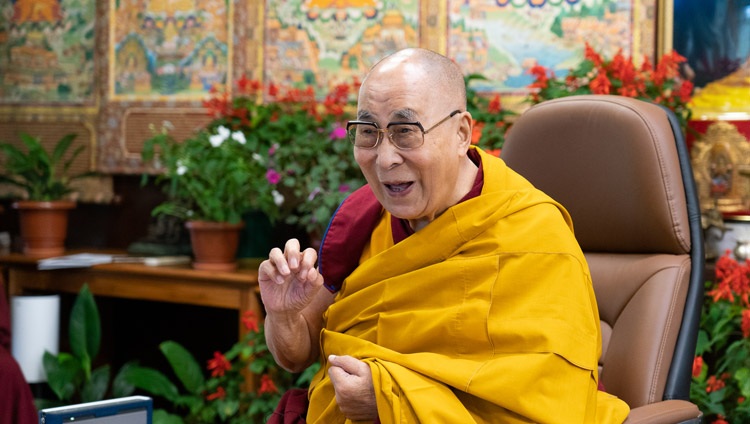 His Holiness the Dalai Lama enjoying a moment of laughter during his online conversation with students and faculty of Monmouth University at his residence in Dharamsala, HP, India on September 22, 2021. Photo by Ven Tenzin Jamphel

“As far as the manufacture and sale of weapons is concerned, we should simply say, “Enough.” We should aim to achieve genuine peace in a demilitarized world. As human beings on this planet, we have to consider the oneness of humanity. We all need to live together in peace and harmony. The production and sale of weapons contributes nothing to this.

“Real world peace is rooted in finding peace of mind. Anger, jealousy and frustration easily become a source of violence, therefore we need to strengthen the sense of compassion that is our basic human nature. As I said before, in the past we really only paid attention to our local community, whereas now we have to take the whole of humanity into account.

“We must focus on finding peace of mind, remembering that compassion is the foundation of genuine peace. As human beings, we have the same kind of face and the same kind of mind. Because we have so much in common, we have to find a way to live together side by side in a peaceful, happy world.

“I recognise that when I lived in Tibet, Tibetans were my foremost concern. However, since coming into exile I have become aware of the wider world. Human beings everywhere are like brothers and sisters. When I meet other people, wherever I am, I smile, and mostly they smile back. That’s what human brothers and sisters do. Other people are just human beings like me. Differences of nationality, race and religious faith are of secondary importance by comparison.

“This morning my Tibetan and allopathic physicians gave me a brief medical check-up. They told me that I’m in good health, but one of the major reasons for this is that my mind is at peace. Constant anger and fear disrupt our health, whereas peace of mind is of immense help in fostering general well-being.

“Sometimes people in search of calm take tranquilisers. I’ve never taken them. I work to cultivate peace of mind and see that I get nine hours sleep. In my experience, cultivating compassion ensures I sleep soundly, have a good appetite and a good digestion.

“Brothers and sisters that is what I want to share with you today.”

His Holiness fielded a range of questions from students and staff of Monmouth University. He acknowledged that we are facing climate change on a global level. As our defences against the heat of the sun are weakened, the world is becoming hotter and the climate is changing. Consequently, even the glaciers at the North and South Poles are melting. Stabilising climatic conditions depends on changing our way of life.

His Holiness cited the example of Tibet as illustrating the dangers of climate change. The Tibetan plateau, he pointed out, is the source of Asia’s major rivers and consequently the water supply of millions of people. No one knows what will happen if we are unable to protect these rivers.

His Holiness the Dalai Lama speaking on the interconnectedness of happiness, health, well-being, and the future of earth during his online conversation with students and faculty of Monmouth University from his residence in Dharamsala, HP, India on September 22, 2021. Photo by Ven Tenzin Jamphel

His Holiness noted that the Covid-19 pandemic has caused distress in many parts of the world and that we have to take precautions on a physical and mental level to protect ourselves. He cited Shantideva’s wise advice to examine whether problems we face can be overcome. If they can, we need to exert ourselves to take those steps. If they are beyond our control, we simply need to accept that; worrying about it will not help. He added that it’s important to follow medical advice.

His Holiness clarified that Buddhism emphasizes the importance of peace of mind. Individuals train to become stabler, happier people who are then able to share what they’ve learned with others. The Buddha, he observed, first became enlightened then taught others on the basis of his experience. If, as individuals, we are able to improve ourselves, to become more disciplined and happier, we’ll be able to be of benefit to others.

People born in the East or the West are the same in being human. They are born the same way and grow up the same way under their mothers’ care. Cultural heritage and ways of life may be different, but fundamentally, as human beings, we are all the same.

His Holiness went on to say that in the past America was segregated on the basis of colour. Now we shouldn’t think that colour, whether we come from the north, south, east or west, or what faith we follow are grounds for setting us apart. We need instead to dwell on what makes us the same.

“I have good friends from Africa,” His Holiness remarked. “Bishop Desmond Tutu, Nelson Mandela and I may be a different colour, but when we smile, we reveal a common human joy.”

He stated that the most important thing to teach a child is to be warm-hearted. Not enough time is given to this in schools and yet it’s obvious that students are attracted to the teachers who smile and respond to them warmly. His Holiness mentioned that in his own childhood he felt happier when his teachers were cheerful and open rather than stern.

Asked how to overcome suffering and achieve inner peace, His Holiness replied that suffering is a part of life. Therefore, he advised, it is necessary to train yourself to find ways to reduce anxiety when faced with trouble. Since young people tend to be more impatient, their seniors can counsel them to be more enduring. His Holiness observed that learning to cope with negative experiences is helpful and leads to the development of inner strength. 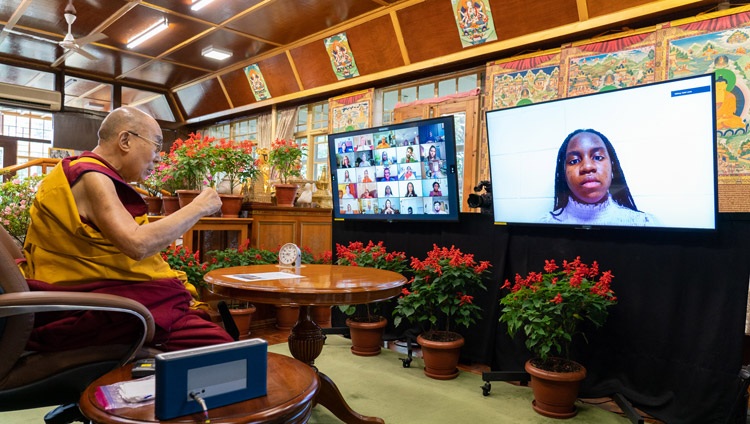 His Holiness the Dalai Lama answering a question form a member of the virtual audience of students and faculty of Monmouth University from his residence in Dharamsala, HP, India on September 22, 2021. Photo by Ven Tenzin Jamphel

“Since I became a refugee,” he said, “I’ve been able to share with many more people how to transform unfortunate circumstances into opportunities for developing peace of mind.”

Death too is a part of life. Sooner or later, we all have to die and when that time comes it’s important to have peace of mind. His Holiness spoke of how the subtlest mind is beginningless. He declared that conception of a child depends not only on the presence of the physical elements, the sperm and the ovum. Conception only takes place when these are joined with consciousness.

His Holiness touched on how the continuity of mental consciousness underlies the idea of a succession of lives. He cited the evidence of children who remember their previous lives. He also alluded to the phenomenon of ‘thukdam’ which occurs when some people die but their bodies remain fresh for some time afterwards because their subtlest mind is still present.

One questioner wanted to know how to deal with feelings of despondency and His Holiness suggested that if someone in such a condition were only interested in material things, they might lose hope. However, if they have some understanding of the mind and work to cultivate inner peace, they will find a solution.

Observing that the emergence of social media is a reflection of how things change, His Holiness noted that in the past we weren’t able to maintain such a wide perspective on the world. Now, when we need to be concerned about the whole of humanity, we have facilities to help us. We have opportunities to encourage young people in new ways of thinking such as the redundancy of the use of force and the importance of achieving a demilitarized world.

Young people today should not necessarily seek to repeat what went before. They would be better to develop new ways of thinking appropriate to changed circumstances. One way to fulfil this is to recognise a general responsibility to build a more compassionate society.

Answering a final question about the Buddha’s teachings, His Holiness stated that the Four Noble Truths are the very basis of the Buddha’s doctrine. He suggested that the truth of the path, referring to the Noble Eightfold Path, is the most important of the four truths. The truth of suffering and its cause are clear, while the third truth, the Truth of Cessation offers hope that suffering and its causes can be overcome. This in turn lends enthusiasm to the practice of the path.

Lu-Ann Russell, Director, Conference Services, brought the session to a close with thanks to members of His Holiness’s team who had facilitated the occasion. She thanked His Holiness for his warm and compassionate guidance, telling him that his words had touched each one of his listeners personally. “We thank you,” she told him, “for the impact you have made on us all. May our collaboration and continued efforts continue to grow together in the days ahead.”