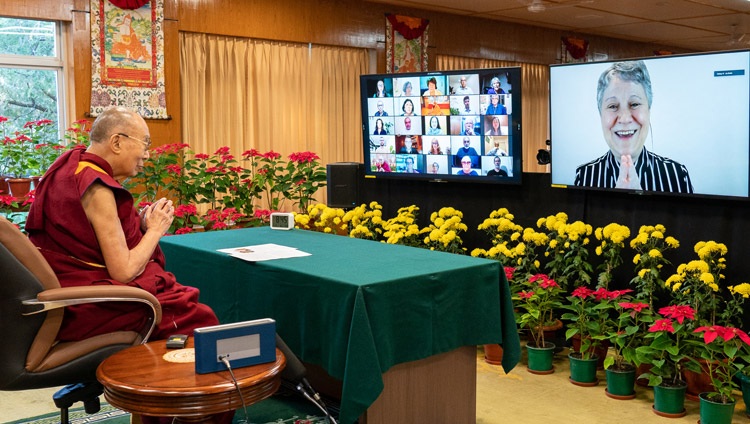 Prof Lia Diskin of Palas Athena, Brazil welcoming His Holiness the Dalai Lama to a conversation on Educating the Heart online from his residence in Dharamsala, HP, India on November 24, 2021. Photo by Ven Tenzin Jamphel

This morning, His Holiness the Dalai Lama was welcomed with boundless joy by Prof Lia Diskin of Palas Athena, Brazil, to a conversation about Educating the Heart. Although this was a virtual meeting, she stated that it was, in effect, his fifth visit to Brazil.

In introducing His Holiness to the audience, Diskin mentioned the importance he places on education and cited the efforts he made to have schools set up for Tibetan children in exile. She also noted the enthusiasm with which he has entered into discussions with modern scientists for more than 30 years. She also remarked His Holiness’s longstanding concern about climate change and damage to the environment.

In his response, His Holiness wished everyone present a “Good morning”, and “Tashi Delek”, and declared how happy he was to have this opportunity to talk to them.

“Elephants may have bigger brains than us, but we human beings are more intelligent. Our intelligence is a distinct human quality. Over the last few thousand years, the world has seen a great number of teachers and thinkers, including the Buddha, who displayed a wonderful human intelligence.

“However, if this intelligence is combined with hatred, anger and fear, it can be very destructive. Therefore, we must be careful to combine it with warm-heartedness instead. By itself, intelligence will not have much impact on our physical health, but when it is combined with compassion and warm-heartedness, it brings peace of mind and improves our physical well-being.

“Cultivating warm-heartedness is not just a religious matter, even scientists today appreciate the contribution it makes to finding inner peace. As mammals and social creatures, when we’re young, we bask in our mother’s affection, but this has nothing to do with religion. It’s about our survival. Since our lives depend on the community in which we live, we need to help each other. And to do that, intelligence alone is not enough, we need warm-heartedness too.

“I often observe that over the last few thousand years anger and self-centredness have given rise to a great deal of trouble on this planet. There’s been too much fighting. Even during my own life I’ve been vividly aware of the consequences of the first and second world wars, and in the Cold War that followed, the risk of a third. These conflicts have taken place not because we lack intelligence, but because our intelligence has not been balanced with warm-heartedness.

“These days everyone appreciates the importance of education, but education should include instruction about the role warm-heartedness plays in an individual’s good health, as well as in peace within families, communities and the world at large. I’m committed to telling as many people as possible that we are the same in being human. Because that makes us brothers and sisters, there’s no point in accumulating weapons and fighting among ourselves. I believe that if you really cultivate a compassionate attitude, even if there is weapon to hand, you’ll have no wish to use it. 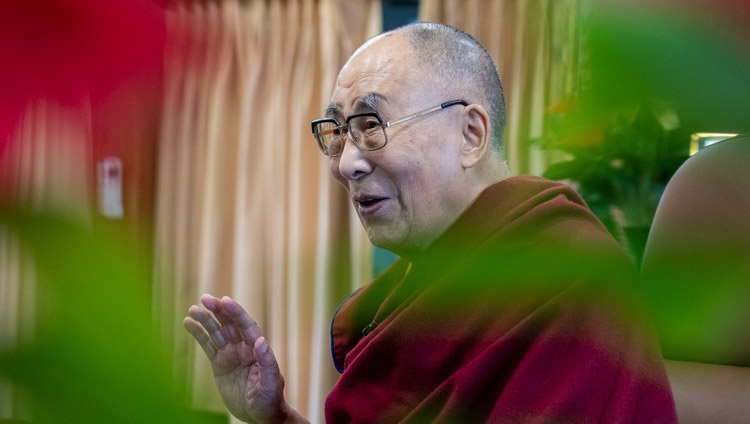 His Holiness the Dalai Lama addressing the virtual audience during his conversation on Educating the Heart organized by Palas Athena, Brazil, online from his residence in Dharamsala, HP, India on November 24, 2021. Photo by Ven Tenzin Jamphel

“When I was a boy I had an air-rifle that I used to scare off the bigger, more aggressive birds that bullied the smaller ones. But today, when I think of the amount of money that is spent on weapons, armies and ‘defence’, I think it’s out of date and a mistake. We need to make this a more peaceful century, an era of demilitarization. We can start by acknowledging that the reason we manufacture so many weapons is because we are angry and afraid. If we can recognise the entire human family as one community, we won’t need these instruments of destruction.

“Education should include training in how to be calm and unafraid. Since scientists now recognise the significance of warm-heartedness and peace of mind in our personal and social well-being, it’s time training to cultivate these qualities was included in the general education system.

“I cultivate compassion on the basis that we are all the same in being human. Wherever I go, whether it’s Europe, Africa or Latin America, I smile. Warm-heartedness is crucial if we are to make this a peaceful century and a peaceful world. This is what I want to share with you.”

Dr Eliza Kozasa, who was to moderate the question-and-answer session with His Holiness, introduced herself as a researcher in neuroscience, a Fellow of the Mind & Life Institute and the Chairperson of Tibet House, Brazil. She asked the first question, wanting to know how neuroscience can help nurture education about altruism and compassion.

His Holiness replied that although consciousness is generally pre-occupied with the stimulus of our sense organs, the cultivation of warm-heartedness and compassion is associated with mental consciousness. We don’t seek peace of mind on a sensory level, but on a mental level. This is why education should focus on ways to develop a healthy mind, as well as a healthy body in order to establish a more peaceful world. 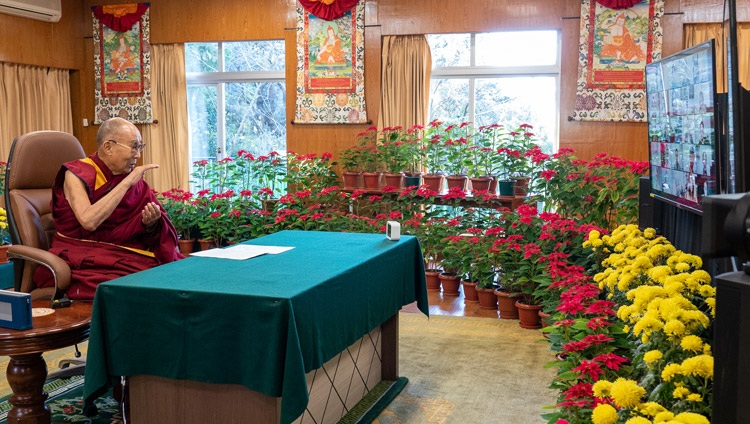 His Holiness the Dalai Lama answering questions from the virtual audience during conversation on Educating the Heart online from his residence in Dharamsala, HP, India on November 24, 2021. Photo by Ven Tenzin Jamphel

These days, His Holiness observed, people have a much broader experience of democracy and social responsibility, which reflect concern for the wider community. If we want to see more stable democratic societies, we have to encourage more people to cultivate peace of mind.

With regard to our relationship with mother earth, His Holiness declared that this world belongs to everyone who lives in it. Protecting the environment is about protecting our own future, because this world is our only home. Scientists are clear that global warming is increasing rapidly and along with it we are seeing more extreme climatic events—floods, drought and fires. He repeated that protecting the environment is a matter of taking care of our own home.

Returning to the question of compassion, His Holiness clarified that its cultivation is not a religious practice focused on ensuring we go to heaven or a good future life. It’s about living a good day-to-day life here and now. It’s about being a happy person. Warm-heartedness is a fundamental good human quality. We need it whether we believe in God or the Buddha or not. His Holiness recalled noticing that even Chinese Communists who were sharply opposed to religion were still genuinely moved to help the poor.

His Holiness was asked how what he has referred to as ‘emotional disarmament’ can affect our response to the Covid-19 pandemic. He answered that our physical well-being is linked to our emotional state. When we are anxious and our minds are upset, we seem to be more vulnerable to illness. When our minds are at peace, that inner strength results in better health. His Holiness remarked that he cultivates warm-heartedness on a daily basis and finds it really beneficial.

His Holiness confirmed that if were to pay less attention to the secondary differences of race, nationality and faith and if we saw other people less in terms of ‘us’ and ‘them’, it would be possible to create a more peaceful world. Acknowledging the oneness of humanity, the fact that we are all the same in being human, is crucial to this. He suggested that if we were to find ourselves lost and alone in a remote place and then were to see someone else coming towards us, we would rejoice that here was another human being—a source of help. We wouldn’t be concerned about where they came from or what they believed in.

In ordinary life, we are all just other human beings and we have to live together. Becoming preoccupied with thoughts of my group, my tribe, my nationality in an exclusive way is unnecessary. We need instead to be concerned about humanity as a whole.

“When I was still in Tibet,” His Holiness recalled, “I was mostly concerned only about Tibet and Tibetans. However, once I became a refugee and a guest of the Government of India, I came to realize how many different nationalities, faiths and cultures there are in the world. And because the people they belong to are all the same in being human, and because we are dependent upon each other we can realistically regard one another as brothers and sisters.”

His Holiness reiterated how important it is to educate people about protecting the environment. He observed that the great rivers that rise on the Tibetan plateau supply water to people across Asia. They are crucial to the very lives of millions. As Dalai Lama, he said, he has retired from political affairs, but he remains dedicated to raising awareness of the need to protect the environment. 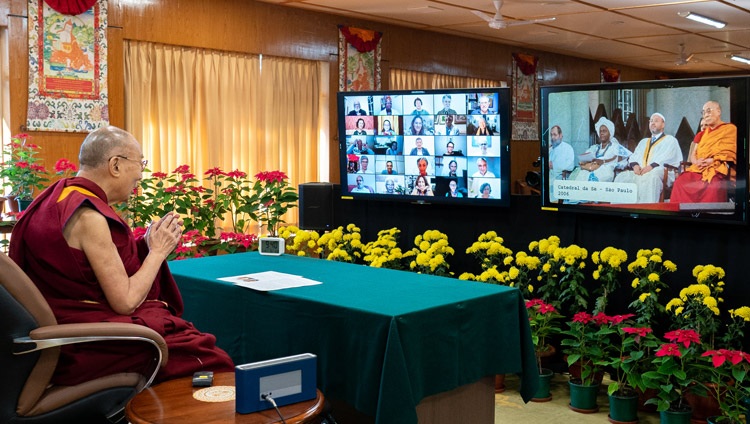 His Holiness the Dalai Lama watching a video of recalling his four previous visits to Brazil at the end of his conversation on Educating the Heart online his residence in Dharamsala, HP, India on November 24, 2021. Photo by Ven Tenzin Jamphel

He mentioned a dream he has that, in desert regions like North Africa, solar power could be employed to desalinate sea water, providing the ability to then green the desert and grow vegetables and fruit. He speculated about whether solar and wind power could similarly help transform the desert regions between Tibet and Mongolia.

Lia Diskin thanked His Holiness for his message of hope. She expressed the wish that efforts to increase education about warm-heartedness, compassion and altruism would be successful and that diligence would be rewarded.

“Thank you,” His Holiness replied. “What I’ve been talking about is related to our daily life. We must pay more attention to cultivating warm-heartedness and a genuine sense that our fellow human beings are our brothers and sisters, viewing the whole of humanity as one community. Thank you.”

Eliza Kozasa thanked everyone who had taken part in the morning’s conversation, as well as all those who had contributed to making it possible. She asked His Holiness if he had any final words for the people of Brazil.

“My favourite subject is warm-heartedness,” he declared. “Compassion and warm-heartedness are not confined to religious practice. We are all human beings. Our mothers gave birth to us and we survived because of her care and affection. Warm-heartedness is not only the key factor for human survival, it is also the basis for being able to live as peaceful, happy human beings.”