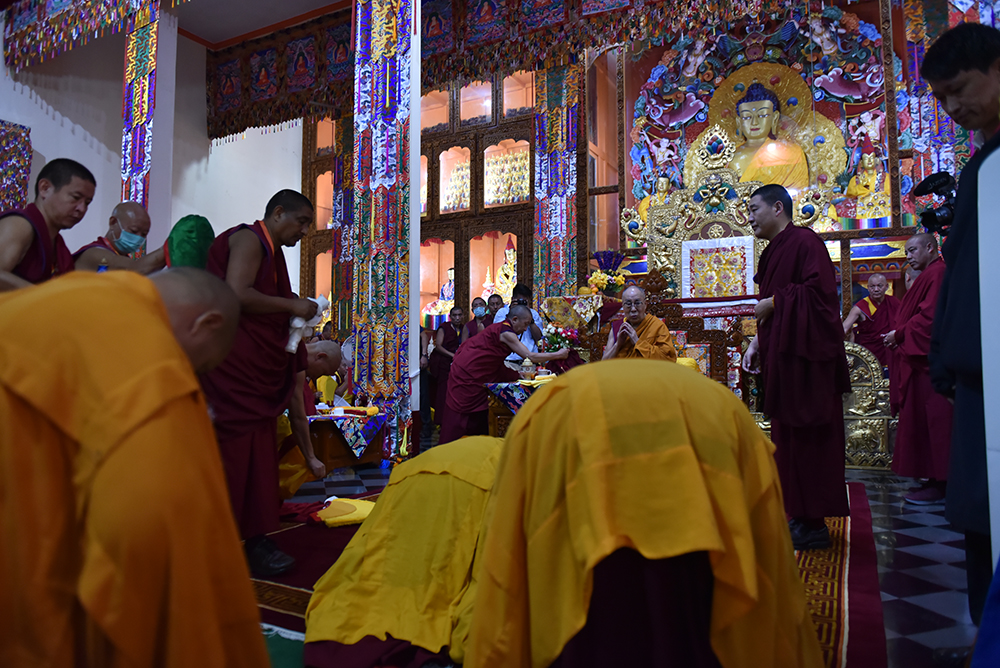 Monks prostrating before His Holiness the Dalai Lama as he presides over the ceremony at Gaden Lachi. Photo/Tenzin Jigme/CTA

Mundgod: His Holiness the Dalai Lama came down to the Drepung Loseling Assembly Hall to listen to monks debating Wednesday morning. Students of the Madhyamaka class discussed dependent arising and assertions such as, ‘for those for whom emptiness is feasible, everything is feasible’. They asked, ‘When you say things are merely designated, what does merely mean?’

Students of the Perfection of Wisdom class discussed the implications of the Mind Only School assertions about ‘imprints left on the mind’ and the twelve links of dependent arising. They also explored questions such as how to prove that all sentient beings have Buddha nature. Students from the class of Valid Cognition sought to prove the existence of past and future lives and the relationship between cause and effect.

The auspicious words recited to conclude the session were drawn from a verse from the ‘Guide to the Bodhisattva’s Way of Life’, which states that bodhichitta ‘like the supreme substance of the alchemists, takes our impure flesh and makes of it the body of a Buddha, a jewel beyond all price’.

His Holiness told the students he had found their debates interesting. He recalled that Ling Rinpoché, a prominent Lama of Drepung Loseling and his Senior Tutor, was a master of sutra and tantra. He was rigorous in his insistence on the use of reason. Yesterday, His Holiness recalled an occasion when Ling Rinpoché was debating with Gönpasar Rinpoché during the Great Prayer Festival in Lhasa and his agile arguments left Gönpasar lost for words.

“Using our human intelligence to the full, we can bring about love and compassion in our minds. With our knowledge and experience of these qualities,” His Holiness remarked, “we can make a contribution to the welfare of the whole of humanity. We routinely pray for the happiness of all sentient beings, but in practical terms we are limited to really helping the 7 billion human beings on this earth with whom we can communicate. And we are able to do this because we have kept the Nalanda Tradition alive among us.

“Some of you have just tried to prove the existence of past and future lives, but when it comes to basic human happiness, what’s important is finding peace of mind in day to day life. I mentioned yesterday that when I was asked how I slept, I replied that because of my meditation on bodhichitta, which is focussed on the attainment of enlightenment for all sentient beings, I sleep well. I’m not anxious; I have no fear. I have peace of mind, therefore I’m physically fit and I sleep well.

“Bodhichitta is also the best practice if you want to live a long life. It is the tree that gives relief to those who wander wearily the pathways of existence. It is the mighty sun that utterly dispels the misty ignorance of wandering beings, the creamy butter, rich and full, that’s churned from the milk of the holy teaching.
“As Shantideva counsels,

And so, today, within the sight of all the protectors,
I summon beings, calling them to Buddhahood.
And, till that state is reached, to every earthly joy!
May gods and demigods and all the rest rejoice! 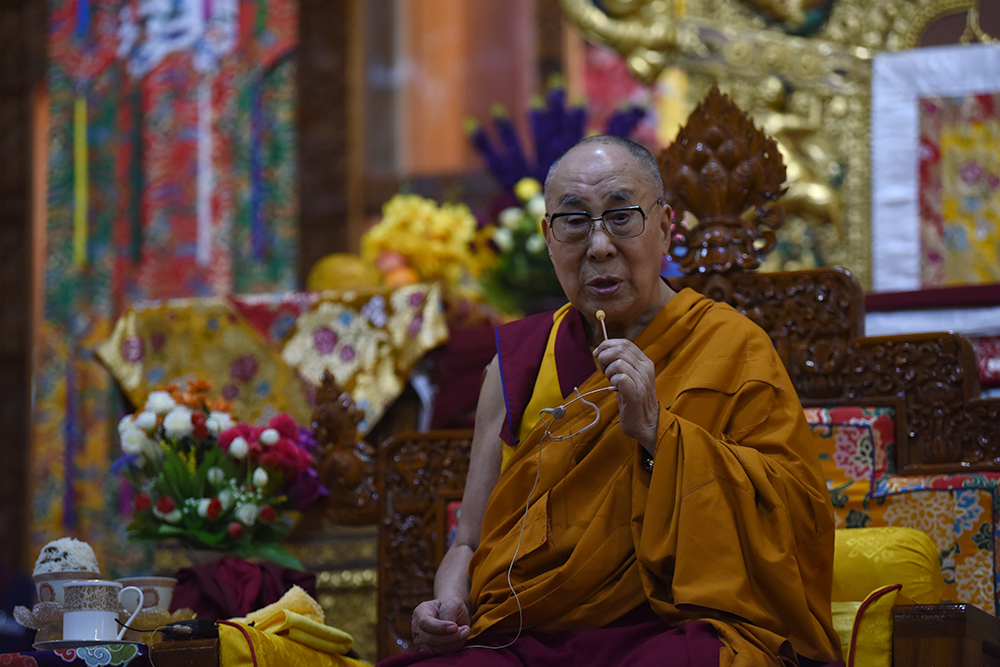 Hundreds of monks, nuns and lay-people saw His Holiness off as he drove away from Drepung. More had gathered at Camp no. 3, where he stopped briefly to bless grain to be used in the consecration of two construction projects.

Arriving at Ganden Lachi he was welcomed by the Abbot of Ganden Shartsé Ven Jangchub Sangyé. Inside the Assembly Hall His Holiness paid his respects before the sacred images of the Buddha, Jé Tsongkhapa and so forth, as monks chanted the ‘Praise to the 17 Masters of Nalanda’. After briefly visiting the protector chapel he took a seat in front of the throne. Tea and sweet rice were served.

“I’d like to greet everyone here, Abbots, Tulkus and everyone else,” His Holiness told the gathering. “Ganden Monastery was founded by Jé Tsongkhapa himself, so it’s appropriate that we celebrate the 600th anniversary of his enlightenment and passing away on the day of Ganden Ngamchö.

“Coming into exile we were helpless in the beginning, but in due course we were able to re-establish the Three Seats of Learning, Tashi Lhunpo and so forth. We’ve done well to preserve the study and practice of the Dharma. As interest in Buddhism in general and Tsongkhapa’s teaching, in particular, has grown, we’ve been able to share them with others across the world, which is good.”

His Holiness walked from Ganden Lachi to the Ganden Shartsé Assembly Hall and addressed the congregation gathered there.

“Today, I’ve come to Ganden Shartsé and we’ll be able to commemorate Jé Tsongkhapa’s anniversary here. During this short visit, I’ve been able to stay at Gomang and Loseling and now I’m going to stay at Shartsé and Jangtsé. I’ll go to Sera and Tashi Lhunpo Monasteries in March or April next year.

“There seem to be many patrons and supporters here. I’d like you to know that your kindness has been of great help to us. These monasteries have long kept alive the Nalanda Tradition through study, reflection and insight, as well as the practices of composition and debate.

“The Chinese also had a connection to Nalanda through Hsuan Xang, but they didn’t take up the study of logic and reason, which is also true of Korea, Japan and Vietnam. As predicted by the Buddha, explanations of philosophy and logic spread north first to Tibet and to Mongolia. The teachings Drogön Chögyal Phagpa had begun there were reinforced by the Third Dalai Lama, Sönam Gyatso.

“Fifteen years or so ago, we reassessed the content of the Kangyur and Tengyur in terms of science, philosophy and religion. Because they are presented in a logical way, explanations of philosophy and psychology can be of benefit to others in a simply academic context. Anyone can use their mind to transform themselves. The Indian practice of non-violence—‘ahimsa’—has flourished for more than 3000 years and it is put it into effect on the basis of compassion—‘karuna’.

“In Buddhist practice we have a vast knowledge of the workings of the mind and emotions. We check the detrimental effects of anger and the advantages of love and compassion. This is because we all want happiness and happiness is founded on peace of mind. To share this idea with the rest of the world is very beneficial. We have a marvellous human intelligence. If we use it properly, we can really be of service to our human brothers and sisters.”

His Holiness retired for the day to his quarters on top of the Ganden Shartsé Assembly Hall. 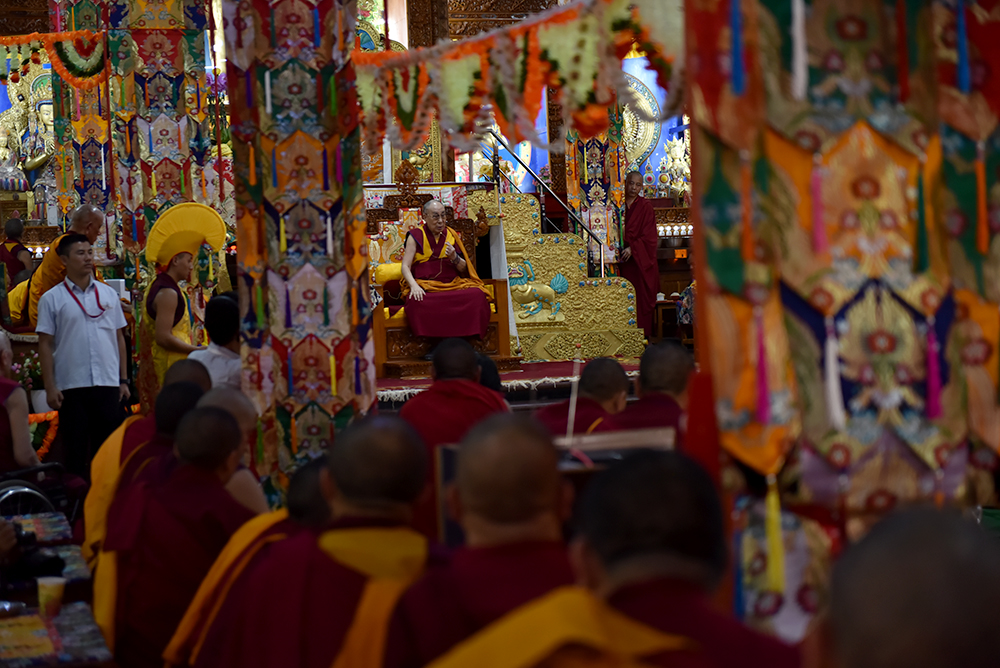 His Holiness the Dalai Lama addressing the congregation during the welcome ceremony at Gaden Shartse Monastery, 18 December 2019. Photo/Tenzin Jigme/CTA 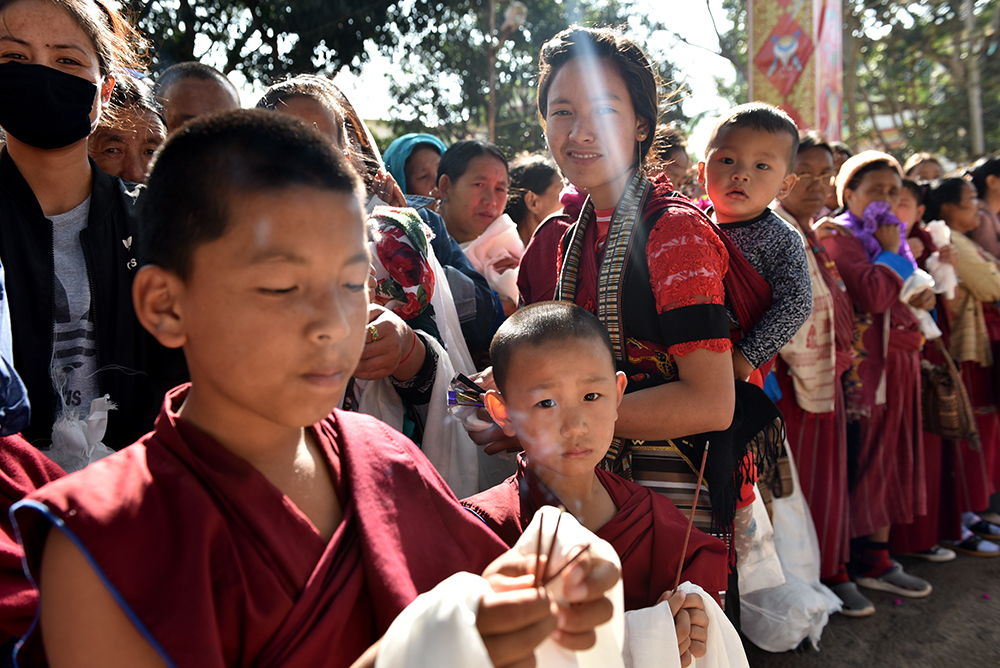 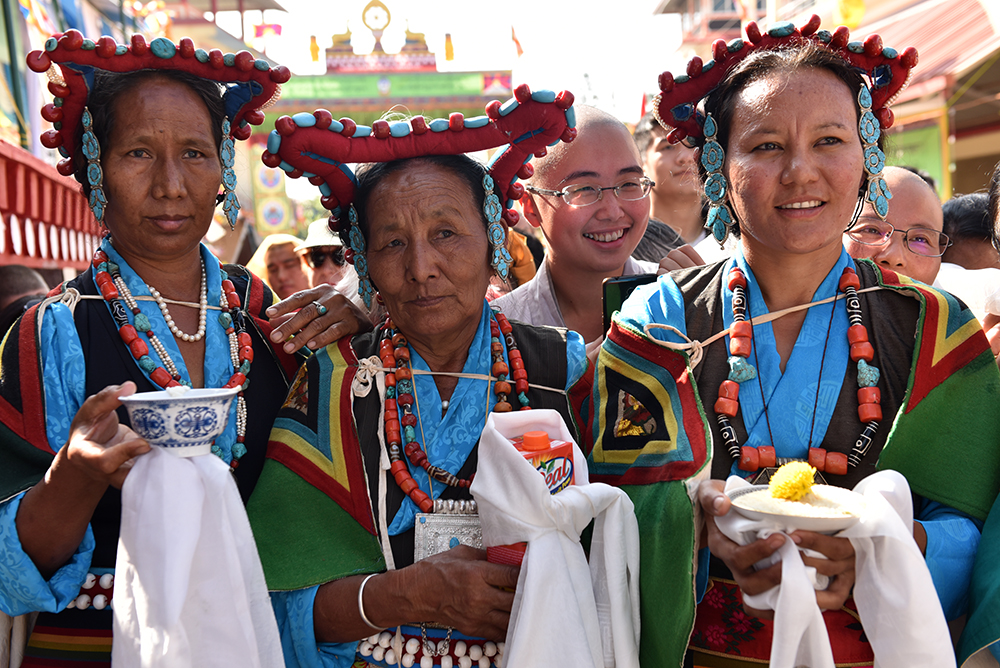 Tibetan women decked out in all their traditional finery waiting to greet His Holiness the Dalai Lama at Gaden Lachi. Photo/Tenzin Jigme/CTA 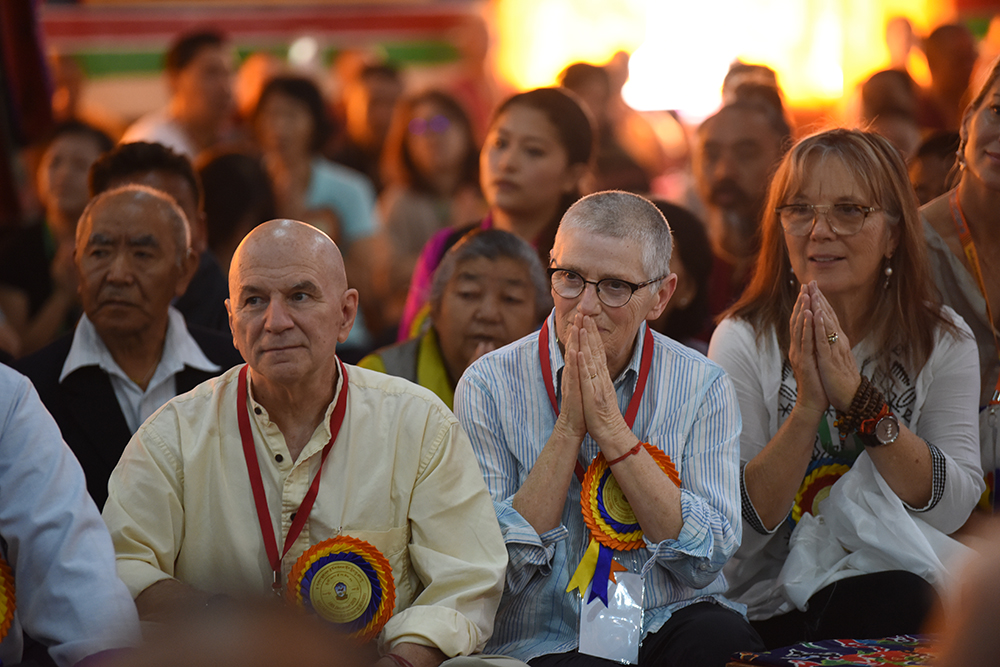 Members in the audience listen in reverence to His Holiness the Dalai Lama at the ceremony at Gaden Shartse. Photo/Tenzin Jigme/CTA 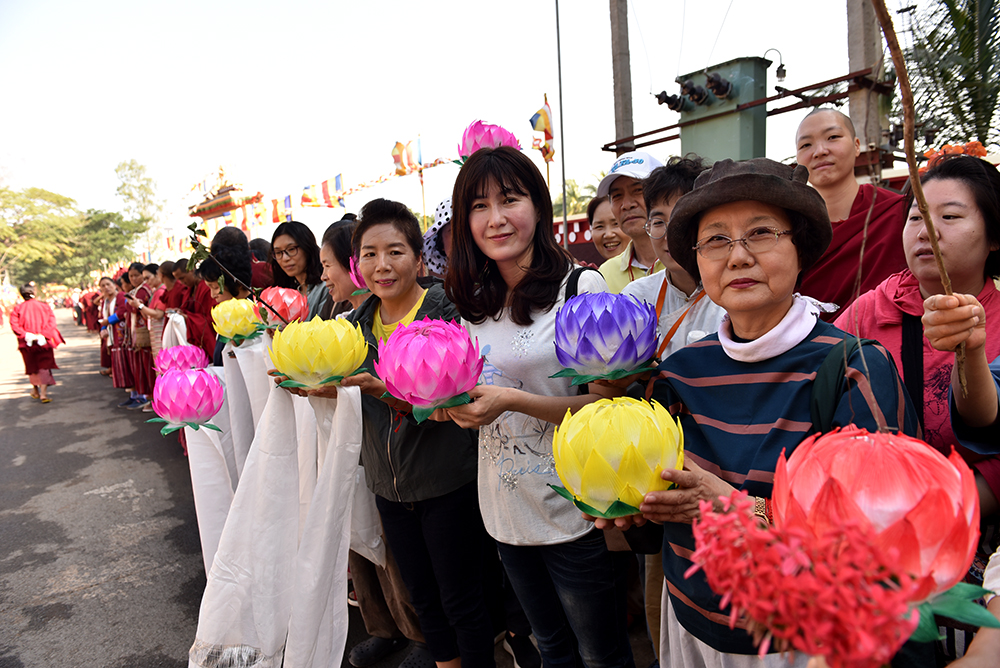 Followers of His Holiness the Dalai Lama holding up a floral creation while waiting to receive Him. Photo/Tenzin Jigme/CTA 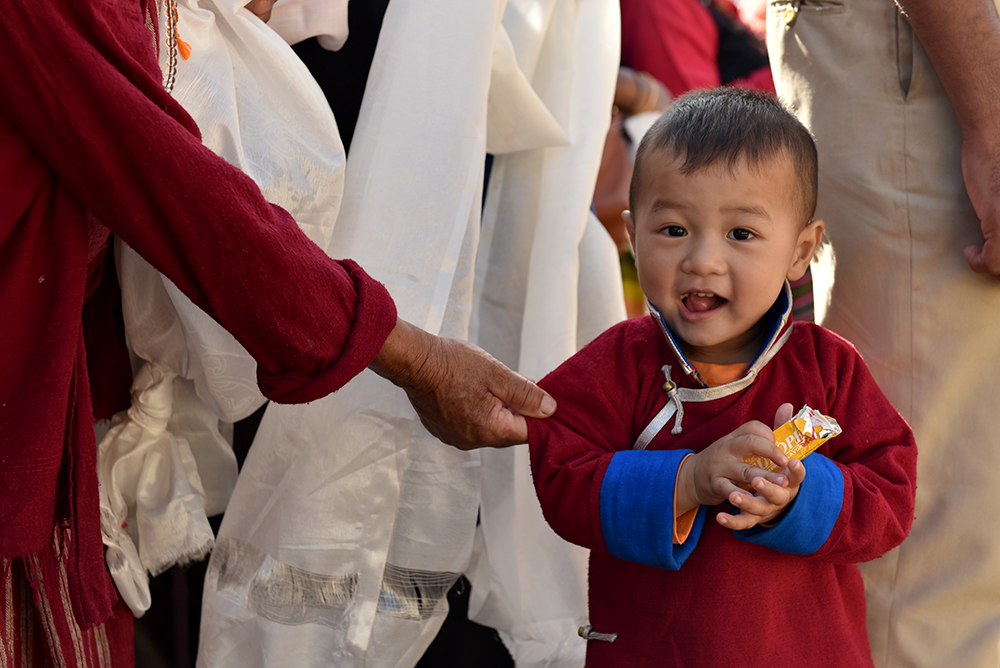 A child amidst the gathering waiting to receive His Holiness the Dalai Lama. Photo/Tenzin Jigme/CTA 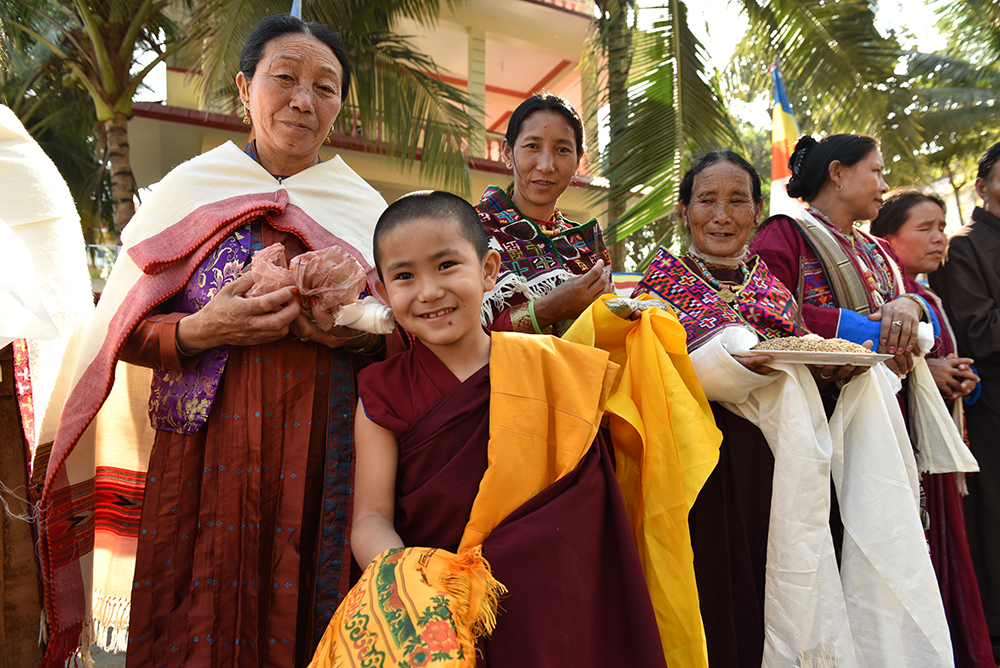 A young Tibetan monk and Tibetan women decked out in all their traditional finery waiting to greet His Holiness the Dalai Lama. Photo/Tenzin Jigme/CTA