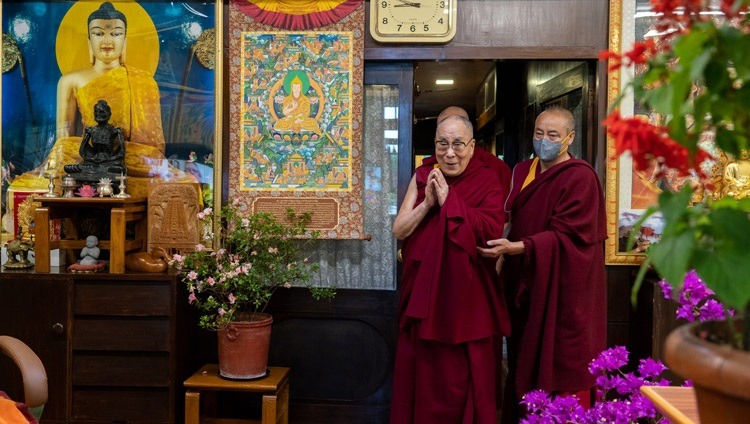 His Holiness the Dalai Lama arriving for the virtual dialogue on Resilience, Hope and Connection for Well-being at his residence in Dharamsala, HP, India on November 19, 2020. Photo by Ven Tenzin Jamphel/OHHDL

Dharamshala: This morning, His Holiness the Dalai Lama was invited to take part in a conversation with Ian Hickie, a Professor of Psychiatry in Sydney as part of this year’s Happiness and Its Causes Conference in Australia. Moderator Tony Steel welcomed His Holiness, Prof Hickie, other conference participants and an online audience of several thousand. He began by asking His Holiness what we can do about problems of isolation and loneliness in difficult times such as the world is going through just now.

“Firstly, I want to express my greetings,” His Holiness replied. “Australia is too far for me to travel to now. I have many friends there and in New Zealand, where I learned to greet people by rubbing noses. Once we become friends, I believe friendship remains for the rest of our lives. And from a Buddhist point of view, once we’ve formed a close connection with someone, it continues in life after life.

“In today’s world, the effects of global warming, such as the bush fires that have swept through parts of Australia, are beyond our control. They are natural phenomena that reflect what is written in some ancient Indian texts about how violence and famine may bring about the end of the world as we know it. Some scientists have suggested to me that if things go on as they are, the climate will become so hot that our established sources of water, lakes and rivers, will dry up. 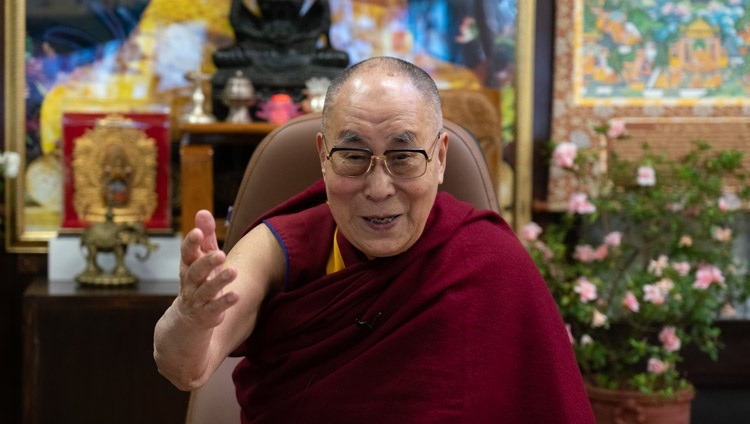 His Holiness the Dalai Lama speaking to the virtual audience during the dialogue on Resilience, Hope and Connection for Well-being as part of this year’s Happiness and Its Causes Conference in Australia from his residence in Dharamsala, HP, India on November 19, 2020. Photo by Ven Tenzin Jamphel/OHHDL

“Logically whatever has a beginning will come to an end. There’s not much we can do about that. What we can do, in the meantime is to live a peaceful, happy life. It’s very sad if we just fight among ourselves. But learning to live happily and peacefully requires education. We need to learn from the fact that during the last century and in the early years of this century there has been too much violence.

“All sentient beings want to lead a happy life and a happy life means a peaceful life. So, we have to think seriously about how to make our world more peaceful and harmonious. We are social animals. We depend on the community in which we live. From the moment we’re born, we depend on the care and affection of our mother and our family to survive. This is nothing to do with religious practice, it’s simply natural behaviour.

“When we’re about two or three years old, we don’t care if other children’s families follow this or that religion, or belong to this or that race, so long as they smile and play happily together. From this point of view, young children are aware of the oneness of humanity. However, once we start going to school, we learn to identify differences between us. We note differences of faith, or social status, whether our companions are rich or poor and so on. And yet these distinctions are only of secondary value. Fundamentally we are all the same in being human. 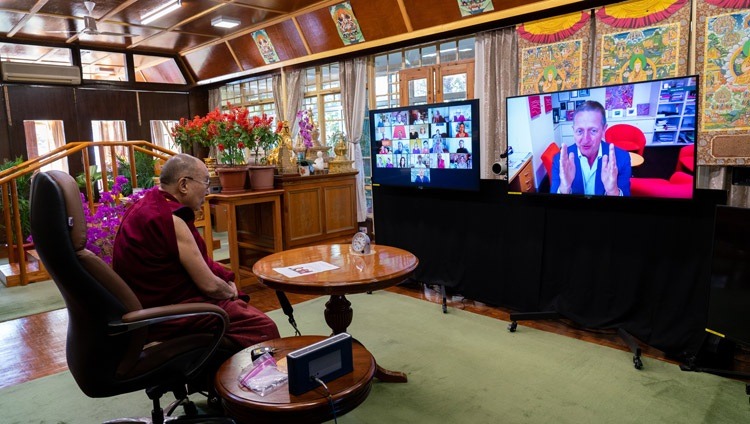 Ian Hickie, a Professor of Psychiatry in Sydney, speaking by video link from Australia during the dialogue on Resilience, Hope and Connection for Well-being with His Holiness the Dalai Lama at his residence in Dharamsala, HP, India on November 19, 2020. Photo by Ven Tenzin Jamphel/OHHDL

“We all have seeds of compassion, loving-kindness and concern for others. On that basis, if we make the effort, we can build a happy human community. In my own experience, when we were still in Tibet, we thought of the outside world and people in it as different from us, especially Europeans and others with their big noses. But once we became refugees in India, we found that those people with big noses became our friends. We became aware of the oneness of humanity and understood that all human beings are basically the same.

“We discovered that everyone wants to lead a happy life. However, real happiness is not about having money or power, it’s about achieving inner peace. If you have peace of mind, you’ll be happy by night and day. Happiness is related to our emotions. And we all have the potential to experience positive as well as negative emotions. Which ones we cultivate depends on how we use our intelligence.

“We can learn how to cultivate peace of mind. Then, we can employ our intelligence to extend our compassionate minds on an individual, family, community and global level. It’s our nature to be compassionate and yet we create all sorts of trouble for other beings. Education should teach us to appreciate that we are like brothers and sisters and that we don’t have much time. If we were in a village at the foot of a hill and a large boulder were rolling down towards us, wouldn’t it be foolish to spend our last moment’s squabbling? 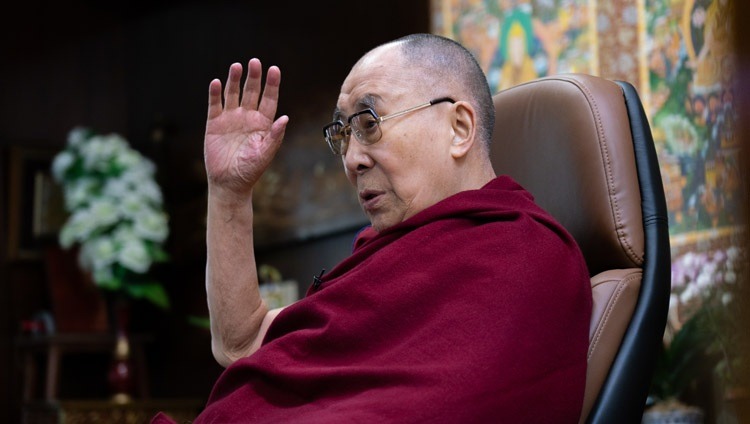 “Through education we must emphasise the oneness of the more than seven billion human beings alive today. And another thing — just as we teach children to observe physical hygiene for its benefits to our health, we need to teach them to cultivate emotional hygiene. They need to learn how to tackle their destructive emotions and achieve peace of mind.

“If the future of humanity and our planet are at risk, wouldn’t it be better to live happily together? We can do without weapons. We must aim for global demilitarization and a world without fear.”

Tony Steel brought Prof Ian Hickie into the conversation. Hickie remarked that the aboriginal people have a saying that an individual can only find inner peace if everyone has it. This is a reflection of how we need social groups. Lately, he suggested, mental health has been declining because of the deterioration of social relationships. We need to base our aspirations for collective action on a recognition of our close connection with each other.

He agreed with His Holiness that we can’t just focus on what’s happening locally, we have to think of the wider community. People are afraid and worried about the future. If collective well-being is based on compassion, and if my sense of inner peace involves you also being at peace — how do we bring this about?

In his reply, His Holiness talked about his admiration for the spirit of the European Union. He explained how for centuries right up to the first and second world wars France and Germany had been enemies. But they came to realize that maintaining the conflict was useless. Their way of thinking changed. Former enemies became friends. Adenauer and de Gaulle recognised that their peoples had to live side by side, so they initiated what became the EU. Consequently, for seven decades members of the EU have no longer killed each other. 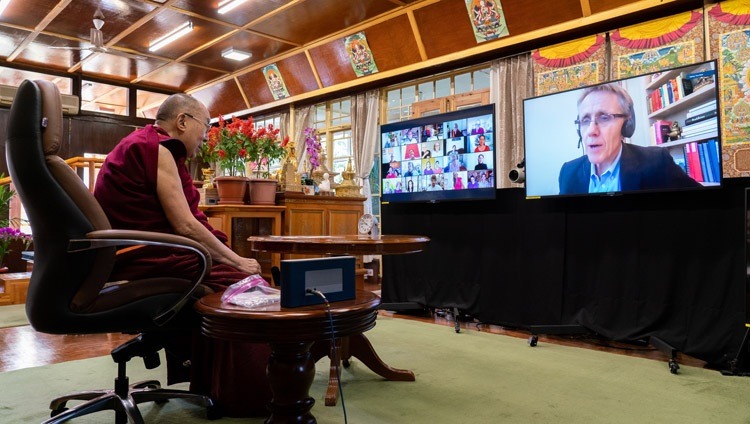 The moderator, Tony Steel, thanking His Holiness the Dalai Lama for participating in the dialogue on Resilience, Hope and Connection for Well-being from his residence in Dharamsala, HP, India on November 19, 2020. Photo by Ven Tenzin Jamphel/OHHDL

In modern democracy, he observed, power no longer belongs to kings or queens. Power is in the hands of the community, and in exercising it there has to be consideration of the good of the whole community. These days, national boundaries no longer reflect the real situation — neither the flow of money nor the spread of the virus are stopped by them.

Prof Hickie wanted to know how people can reconcile challenges they face on a global level with what they experience locally. His Holiness reported what one ancient Indian master had advised. He recommended analysing whatever problem you face to see if it can be solved. If it can, then implementing the solution is what you should do. If there is no solution and nothing can be done, that’s what you have to accept. Worrying about it won’t help.

With regard to the pandemic, His Holiness remarked that many people are working to find treatments and to develop a vaccine so there’s no need to feel discouraged. It’s important to believe that the challenge can be overcome.

Hickie asked how hope can be passed on to the next generation. His Holiness replied that we are going to have to pay more attention to ecology. Change will take place over the next century. A crucial test will be protecting sources of water. He conceded that it may be impractical and unrealistic, but he has wondered whether it might not be possible, in places like the Sahara, to use solar power to operate desalination plants to green the desert and so produce more food.

His Holiness said that at the age of 86 he doesn’t worry about his own future, but he takes great encouragement from the way young people today are acutely aware of the risks to their future.

His Holiness the Dalai Lama taking part in a virtual dialogue as part of the Happiness and Its Causes Conference in Australia from his residence in Dharamsala, HP, India on November 19, 2020.

Hickie mentioned that there are people who say that focussing on your own inner peace is to take a selfish approach and to retreat from engaging with the real world. “How do we reconcile achieving peace of mind and leading a compassionate life with engaging with a complex world?”

“It’s in our best interests to create a happier world,” His Holiness responded. “In the face of crisis, it would be foolish to foment further conflict. The fact that all religious traditions teach the importance of love and compassion, tolerance and forgiveness mean that there is a basis for harmony between them. But since we all have to live together, I encourage taking a secular approach, so that we live simply as warm-hearted human beings.”

Tony Steel put a final question to His Holiness about his involvement with scientists over the last thirty years or more. He asked His Holiness what he thought he had been able to contribute to modern science and what he had gained from the interaction.

“The Nalanda Tradition is based on reason and logic,” His Holiness observed. “Taking a logical, reasoned approach, investigating and analysing is something we share with science. Now, as far as the mind is concerned, modern science still has only a limited understanding. However, these days scientists are paying it much more attention, especially in terms of ways to create inner peace.

“Remarkable progress has been made in understanding the function of the brain, but a corresponding understanding of the workings of mental consciousness has yet to be reached. The experience of yogis who have trained in ancient Indian traditions is useful for the light it sheds on the various levels of subtle consciousness. One example is the observed phenomenon of meditators who are shown to be clinically dead, but whose bodies remain fresh for a period after their apparent death. Science has, as yet, no explanation.

“We say that the subtlest level of consciousness has remained in the psychic channels within the body. The heart has stopped and the brain has ceased to function and yet decomposition has not taken place. Scientists, Russians and Americans among them, are investigating what is going on.”

Tony Steel thanked His Holiness and Prof Ian Hickie for their contributions. He ended by wishing His Holiness good health and long life, and expressed the hope to meet him again in person before too long.