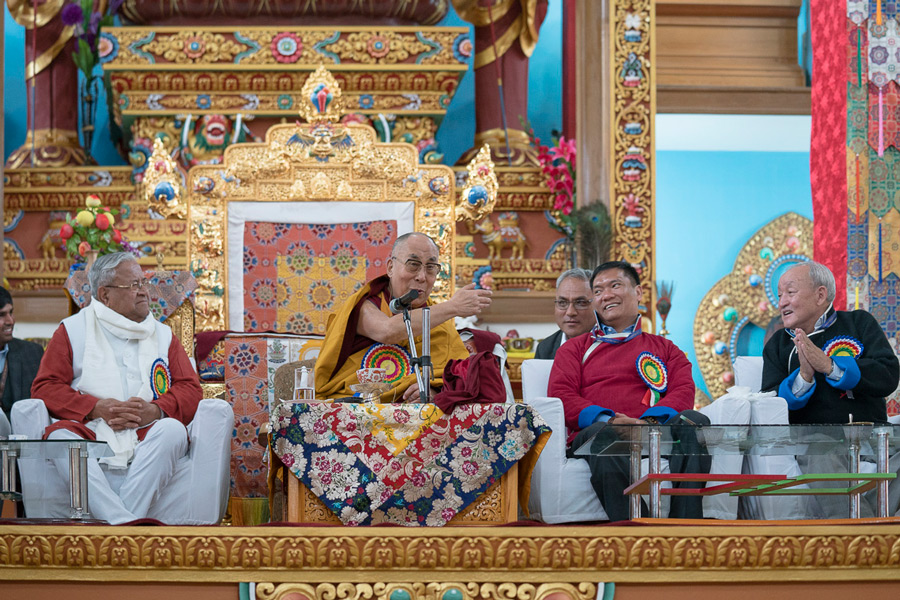 His Holiness the Dalai Lama, flanked by Governor of Arunachal Pradesh, Padmanabha Acharya and Chief Minister Pema Khandu, addressing the audience at the inaugural ceremony of the new temple at Thubsung Dhargyeling Monastery in Dirang, Arunachal Pradesh, India on April 6, 2017. Photo by Tenzin Choejor/OHHDL

This morning the day began in the new temple of Thupsung Dhargyeling Monastery with the recitation of the Guru Puja or Lama Chöpa. As many women’s voices as men’s could be heard. The Hon Minister of State for Home Affairs, Shri Kiren Rijuju, whose native village is nearby, met His Holiness the Dalai Lama to welcome him to Dirang. Since Parliament is in session and his presence was required in the Lok Sabha, Rijuju was unable to attend the morning’s inaugural ceremony at the monastery.

His Holiness descended from his quarters on the top floor of the temple in the only elevator in the entire district and took his seat between the Governor of Arunachal Pradesh, Padmanabha Acharya and Chief Minister Pema Khandu. The occasion began with a mandala of the universe and representations of the body, speech and mind of enlightenment being offered to His Holiness. This was followed by an exemplary debate by members of the lay community, both women and men.

Ven Thupten Rinpoche read a report about the establishment of the monastery during which he was several times overcome with emotion. He attributed the inspiration for the creation of the institution to His Holiness’s persistent advice to establish a centre of learning where people could readily study the Nalanda Tradition in Arunachal Pradesh. He said they had done so, providing the best facilities they could find.

He declared that the intention was to provide opportunities for both monastics and laypeople to study the scriptures and in particular the classic works of the Seventeen Masters of Nalanda. The aim is to educate with a view to training people with moral stature and a kind heart. He described a programme that includes introductory classes three times a week and a more serious course in Buddhism, Bhoti language (Tibetan) and Buddhist history to run for one and a half months a year, for which students will be awarded a certificate after four years. He mentioned plans for a retreat programme and an annual fasting retreat. Thupten Rinpoche expressed gratitude for His Holiness’s guidance so far and sought his further advice.

In his remarks, TN Thongdok, Speaker of the Arunachal Pradesh Assembly expressed appreciation of His Holiness’s kindness in coming by road when the helicopter flight was called off. He noted that when His Holiness first came through the region in 1959, although it was historically Buddhist, interest had waned. He said it was due to His Holiness’s repeated visits and the inspiration he gave the people that interest in study and practice had very much revived. 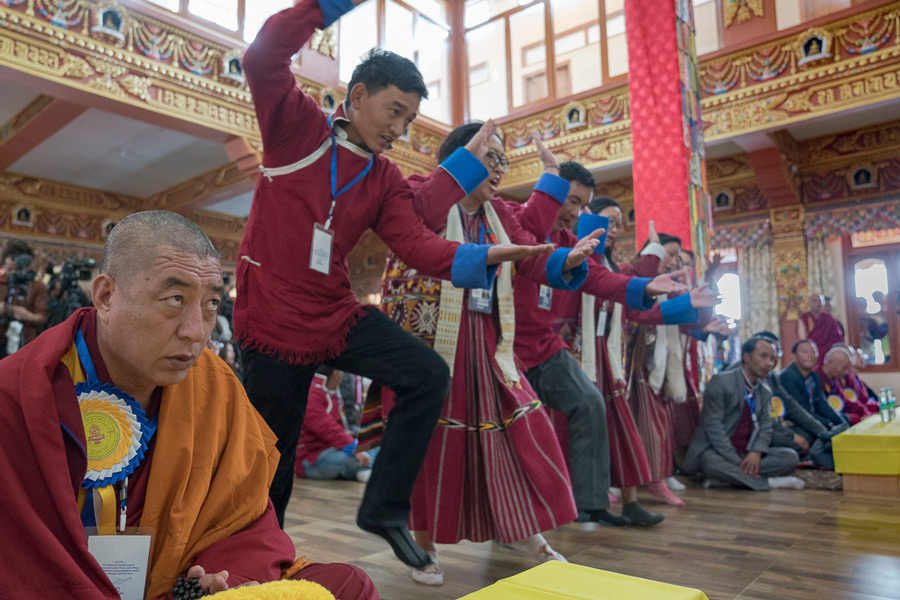 Members of the lay community debating Buddhist philosophy in front of His Holiness the Dalai Lama at Thubsung Dhargyeling Monastery in Dirang, Arunachal Pradesh, India on April 6, 2017. Photo by Tenzin Choejor/OHHDL

The Governor of Arunachal Pradesh, Shri Padmanabha Acharya welcomed His Holiness on behalf of the people of the state. He called today an auspicious day, saying that His Holiness’s presence was a source of strength and inspiration.
“Dear brothers and sisters,” His Holiness began, “I always start by greeting people as brothers and sisters, because the reality is that this is what we 7 billion human beings are. If this is what we emphasize there’ll be no basis for bullying or cheating, much less killing one another. Scientists have shown through experiments with pre-language infants that basic human nature is compassionate. They have also found evidence that living in constant anger, hatred, fear and suspicion has the effect of undermining our immune system. That compassion is beneficial and anger and fear are detrimental is the same for all of us 7 billion human beings.

“Many of the problems we face today, such as the huge gap between rich and poor, are of our own making. Here in India too there is caste discrimination, which is now inappropriate and out of date. We are all human beings with the same rights and aspirations to be happy. I consider myself to be just one of them. I don’t think about being a Buddhist, a Tibetan or the Dalai Lama in ways that set me apart and create barriers with others that would only leave me lonely. I am fully committed to promoting the oneness of humanity and the importance of our human values, with a view to individuals, families and communities being happy.”

Citing his changed travel plans as an example of turning a difficulty to advantage he said:

“The other day flying from Guwahati to Dibrugarh there was such turbulence I thought my end had come. As a result we decided to travel by road instead of helicopter. The benefit has been that I have seen far more people on the road that I would otherwise have done and they have been able to see me.”

His Holiness remarked that of the great ancient civilizations of Egypt, China and the Indus Valley, he feels that the Indus Valley ultimately gave rise to a greater number of great thinkers. Buddhism, especially the Nalanda Tradition, as part of this trend, eventually spread virtually throughout Asia. He referred to the key concepts of emptiness of intrinsic existence and dependent arising that in his experience enable us to tackle our destructive emotions.

He suggested that the Buddha was not only the founder of Buddhism, but also a great thinker and a scientist who advised his followers not to accept his teaching at face value but to examine and investigate it in the light of reason. Scholars of the past like Nagarjuna and Buddhapalita had done just that.

“Modern Indians are too inclined to emulate Westerners and modern education is too oriented to material goals with too little attention paid to inner peace. We live in a time of moral crisis, which will not be solved by relying only on prayer, but by training the mind and confronting our destructive emotions. On the one hand we need a sense of universal values derived from common experience, common sense and scientific findings and on the other we need to combine modern education with ancient Indian knowledge of the workings of the mind and emotions.”

With regard to his hopes to see a centre of learning emerge at this monastery His Holiness commented:

In concluding the ceremony Thubten Rinpoche presented a statue of the Buddha to His Holiness, the Governor and Chief Minister. Local MLA Phurpa Tsering, giving the vote of thanks, expressed “gratitude to His Holiness for coming and blessing this land.” The guests convened upstairs for lunch.

In the early afternoon, His Holiness went down to the teaching pavilion perched above an extensive ground on which an estimated 20,000 people had gathered to listen to him. He explained what he was going to do.

“Today I’m here with you again. The original plan had been to fly to Tawang, but the weather changed that. I’m here earlier than anticipated and the teaching I’m going to give is the permission of Chenresig Who Liberates from Unfortunate Realms and before that the ‘Eight Verses for Training the Mind’. Right away I’m going to give you a reading transmission of the Guru Yoga, the ‘Inseparability of the Spiritual Master from Avalokiteshvara’ so you can recite it while I do the preparations for the other permission.” 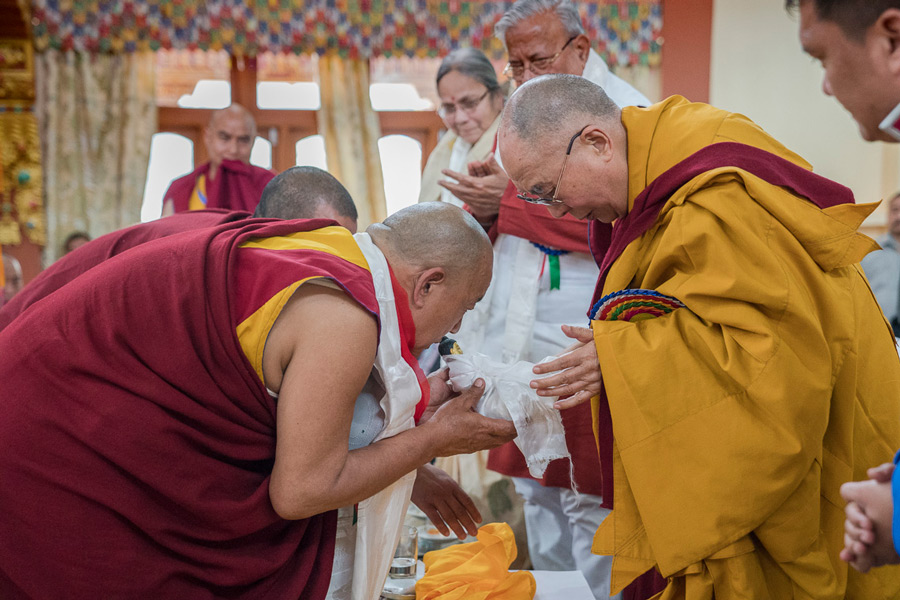 Thubten Rinpoche presented a statue of the Buddha to His Holiness the Dalai Lama at the conclusion of inaugural ceremony of the new temple at Thubsung Dhargyeling Monastery in Dirang, Arunachal Pradesh, India on April 6, 2017. Photo by Tenzin Choejor/OHHDL

During the recitation of the Guru Yoga and the accompanying tsog offering women notably took an equal part in the proceedings. They took part in the chanting, playing the music and the actual offering of the tsog to His Holiness.

“We’re not here for the purpose of business or entertainment,” His Holiness observed. “What people in the world are failing to do today is to use their minds to generate happiness; they are lost instead in sensory experience. All religious traditions have ways of contributing to mental peace, but where faith otherwise predominates what distinguishes Buddhism is that it employs faith supported by wisdom. It directs us to use our intelligence. Ignorance gives rise to unhappiness, but we can overcome it with insight into reality.

“Some refer to Buddhism as science of the mind and it does help us transform our minds by harnessing understanding. Where disturbing emotions like anger and attachment are rooted in ignorance, the Buddha’s teaching is rooted in insight into reality. Scientists appreciate the ideas of dependent arising and I’ve asked if they have anything corresponding to it, but they tell me ‘not yet’.”

His Holiness asked the audience to open the books they had been given to read the ‘Eight Verses for Training the Mind’. He clarified that the text is about using the mind to develop happiness rather than getting lost in sensory pleasure.

He mentioned that Tibetan Emperor Trisong Detsen invited Shantarakshita to Tibet who established Buddhism on Tibetan soil. Two centuries later the tradition had declined and Atisha was invited to restore it. He founded the Kadampa tradition that the author of this text, Langri Thangpa belonged to. His Holiness recalled that he received this teaching first as a child from Tagdag Rinpoche and later from his junior tutor Trijang Rinpoche.

The text teaches Bodhichitta, the compassionate aspect of the path as well as the profound aspect of emptiness. He remarked that a Bodhisattva has two focuses—other beings and enlightenment—and works to attain enlightenment on the basis of wisdom. He read steadily through the verses commenting briefly on them until the advice in the final stanza to avoid being sullied by thoughts of the eight worldly concerns and seeing all things as illusions, without attachment, to gain freedom from bondage.

His Holiness then embarked on the permission of Chenresig Who Liberates from Unfortunate Realms, reporting that the practice derives from a vision experienced by Tagphu Dorje Chang, who was famously blessed by Arya Tara. He said there is a tradition that every time an individual receives it, one life in the lower realm is shut off. In the course of the ritual, His Holiness led a ceremony for generating the awakening mind of bodhichitta, concluding with several verses of rejoicing.

Tomorrow, His Holiness will leave Dirang by road to drive to Tawang, a journey that will take him over the 4170 metre Sela Pass. 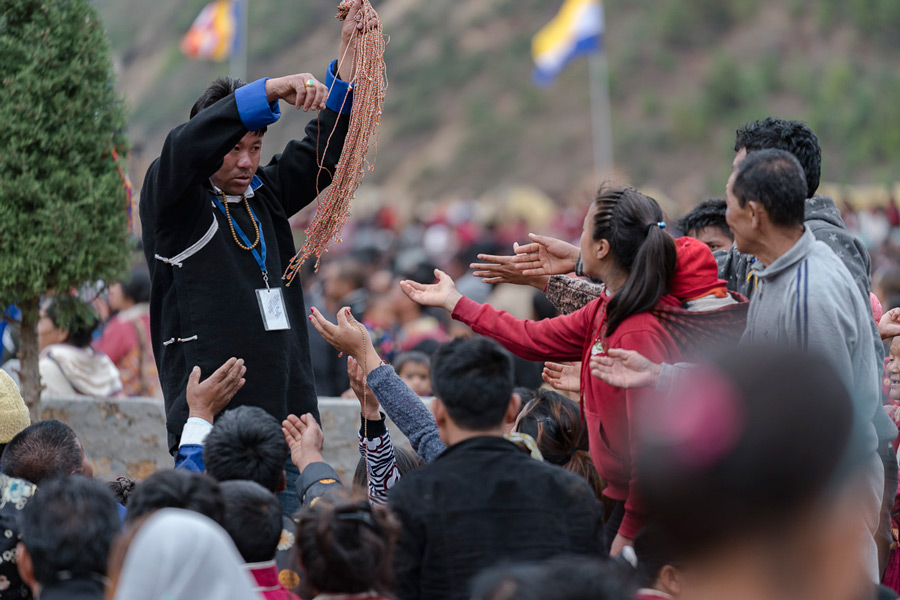 Volunteers handing out ritual protection cords during the Avalokiteshvara Permission granted by His Holiness the Dalai lama in Dirang, Arunachal Pradesh, India on April 6, 2017. Photo by Tenzin Choejor/OHHDL 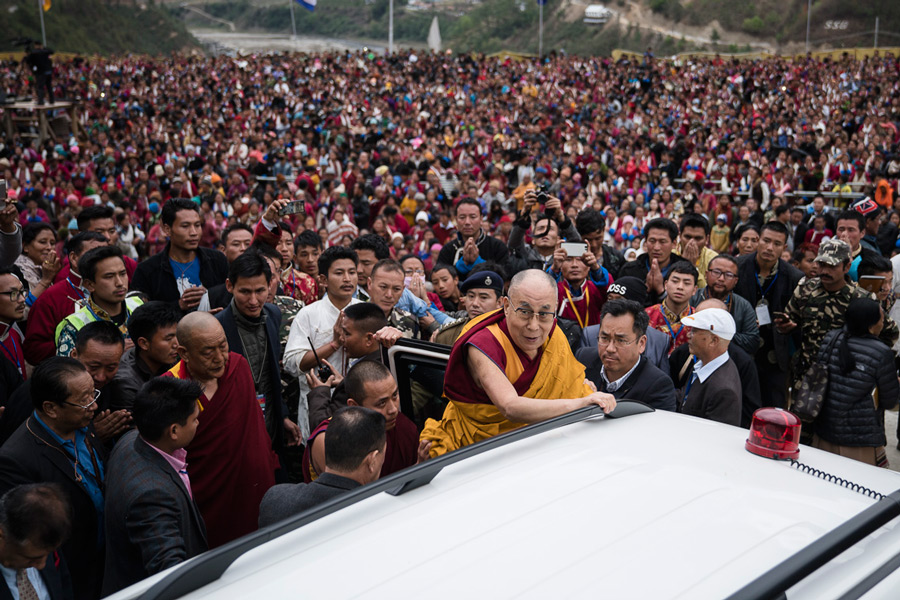 The crowd of over 20,000 looking on as His Holiness the Dalai Lama departs at the conclusion of his teaching at Thubsung Dhargyeling Monastery in Dirang, Arunachal Pradesh, India on April 6, 2017. Photo by Tenzin Choejor/OHHDL