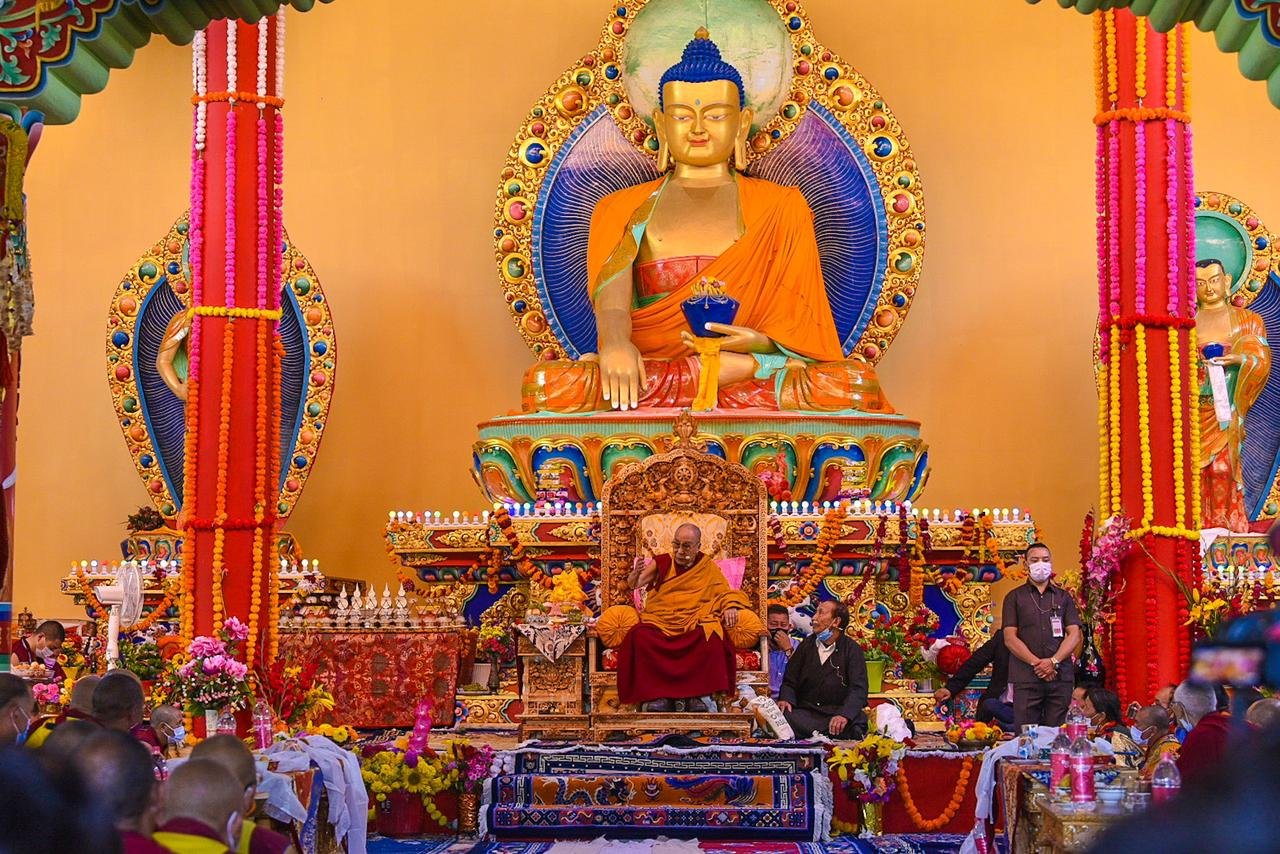 Shewatsel, Leh, Ladakh, India, 23 August 2022: This morning His Holiness formally inaugurated a new centre of learning at Thupstanling Gonpa, Diskit Tsal, Leh. Built by members of the local community it is a spacious centre, open to all religious denominations, where there will be facilities for holding classes on Buddhist philosophy, a library, and so forth.

The hall was packed to full capacity, with more than 1500 people inside and an equal number gathered in the courtyard outside. The Abbot of the Gonpa made the customary offering of a mandala to His Holiness, after which representatives of the Diskit Tsal community also sought his blessings. One of these community representatives gave an introductory speech in which he expressed deep gratitude to His Holiness for his visit and briefly explained the background and development of the project. The institution has grown to its present size from a small Buddhist temple first founded in 1984.

“The people of Ladakh and Zanskar have been so devout and welcoming whenever I visit. As a follower of the Buddha, whose daily practice includes cultivating the awakening mind of bodhichitta, I am committed to serving my fellow human beings whoever they are. Indeed, the essence of all religions is to be of help to others. Of course, providing financial and other material support is good, but it is even better to counsel others to be warm-hearted and develop peace of mind. 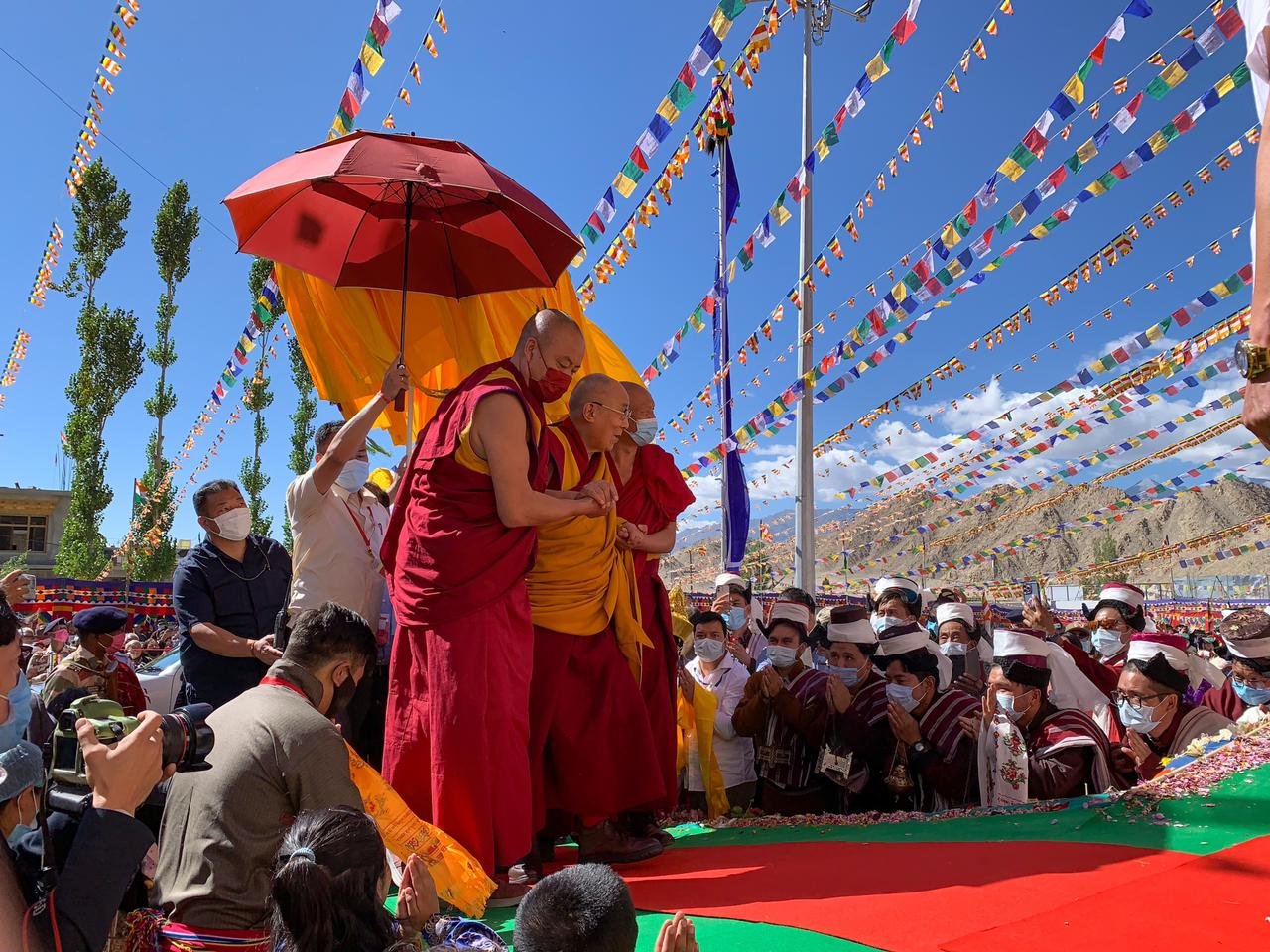 A mass of devotees and followers receiving His Holiness the Dalai Lama at Disket Thupstenling upon His Holiness’ arrival. Photo / Tenzin Tenkyong / Bod.Asia

“It is fortunate that we have all been born as human beings and have met the teaching of the Buddha. Since Avalokiteshvara is the patron deity of Tibet, Tibetans are accustomed to reciting the six-syllable mantra, ‘Om Mani Padme Hung’ and observing such practices as avoiding killing insects and the people of the Himalayan region share in these kind traditions.

“Before I retired from political responsibility, we adopted the Middle Way Approach according to which we are seeking a mutually acceptable solution to the issue of Tibet. This means that we are seeking genuine autonomy rather than complete independence, primarily concerned with preserving our identity, language and rich Buddhist cultural heritage in all Tibetan speaking areas.

“I am very glad that people of the Himalayan region, from Ladakh in the west to Arunachal Pradesh in the east, are also making a valuable contribution to protecting and preserving the Nalanda Tradition, rooted as it is in reason and logic. It is because of this logical, reasoned approach that many scientists today are able to take an interest in Buddhist psychology with its methods for training the mind and emotions. I’d like to commend you for your efforts.”

His Holiness spoke of the affinity he felt for the Muslim community in Lhasa, who he described as very peace-loving people. He mentioned recently meeting some Muslim women whose parents had lived in Lhasa before 1959, many of whom spoke fluent Tibetan. 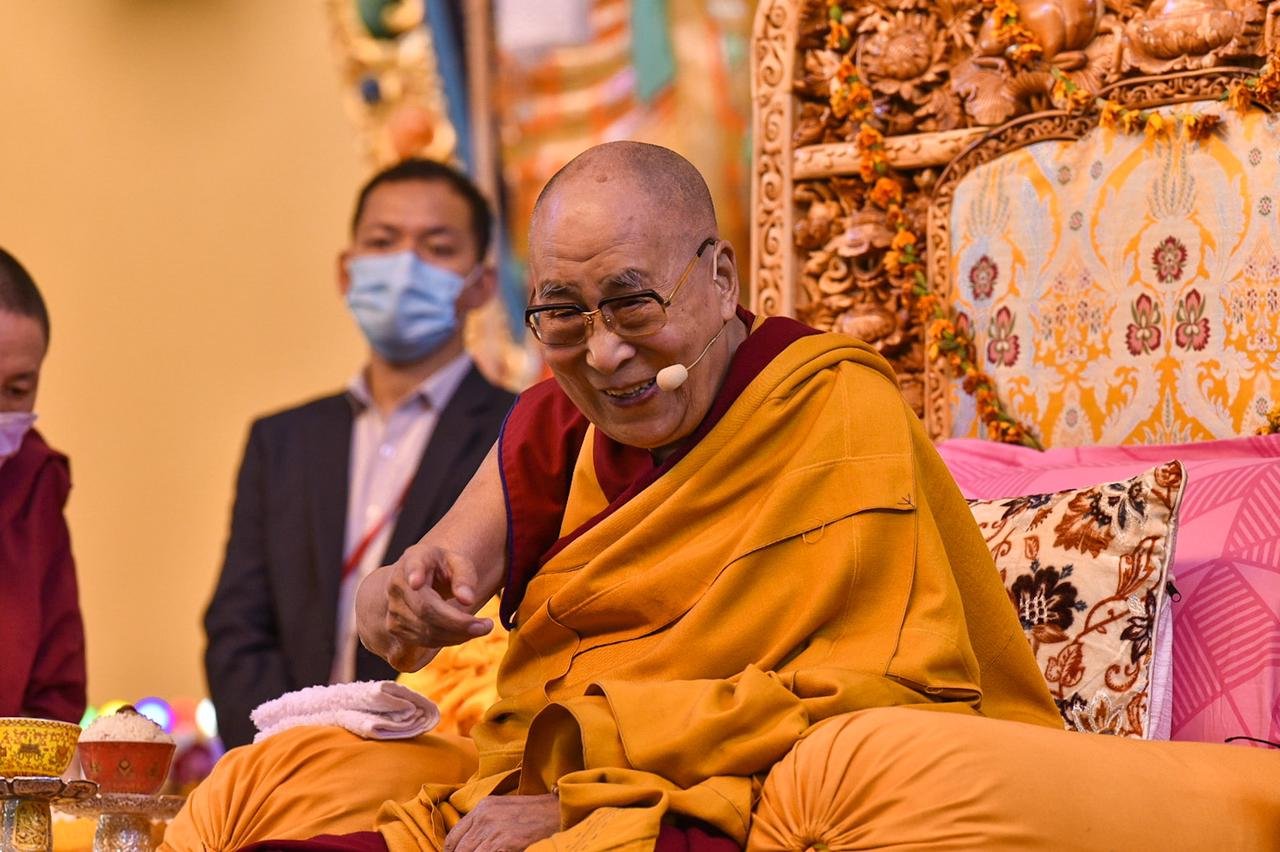 His Holiness once again emphasized the importance of caring for the environment. He recommended planting and caring for trees and taking steps to protect the local ecology.

His Holiness told his audience that times are changing, and that a time would come when Ladakhis would be able to visit Lhasa again, which prompted widespread applause. He ended by advising the gathering to be happy and warm-hearted.

His Holiness was next invited to a farewell luncheon at the Sindhu Ghat, on the banks of the Indus River, near Shey, by the Ladakh Autonomous Hill Development Council (LAHDC). Among those present were the elected Councillors headed by the Chief Executive Councillor, Shri Tashi Gyalson, district officials, representatives of various organisations and religious communities.

Requested to give a few words of advice, His Holiness observed that an important aspect of the oneness of humanity is our shared need for love and affection. This is why it is worthwhile trying to lead a meaningful life by cultivating a warm heart and working for the welfare of all sentient beings. If we can do that, as we breathe our last, surrounded by affectionate friends and relatives, we’ll be able to leave joyful and at ease. 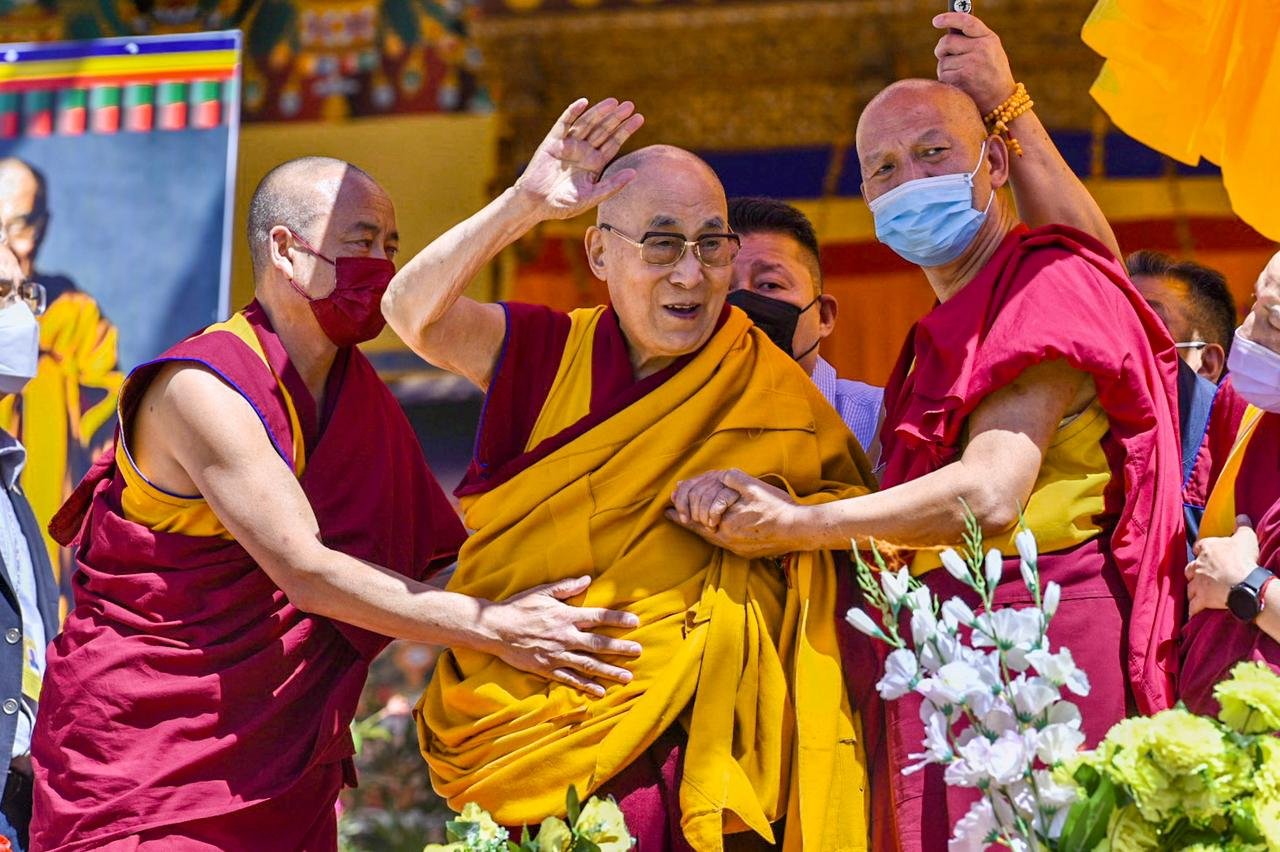 His Holiness praised India’s age-old principles of ‘ahimsa’ and ‘karuna’, which have great potential to create a more peaceful and harmonious world. He noted that Mahatma Gandhi had propagated ‘ahimsa’, and leaders such as Martin Luther King and Nelson Mandela had learned from his example. However, His Holiness suggested, it is now time to also practise compassion, which is a key factor in developing peace of mind and inner strength, crucial factors in creating a happier society.

Executive Councillor, Ghulam Mehdi from Turtuk offered a vote of thanks at the end of the lunch. He prayed that His Holiness live a long and healthy life and that he continue to visit and shower his blessings on Ladakh. 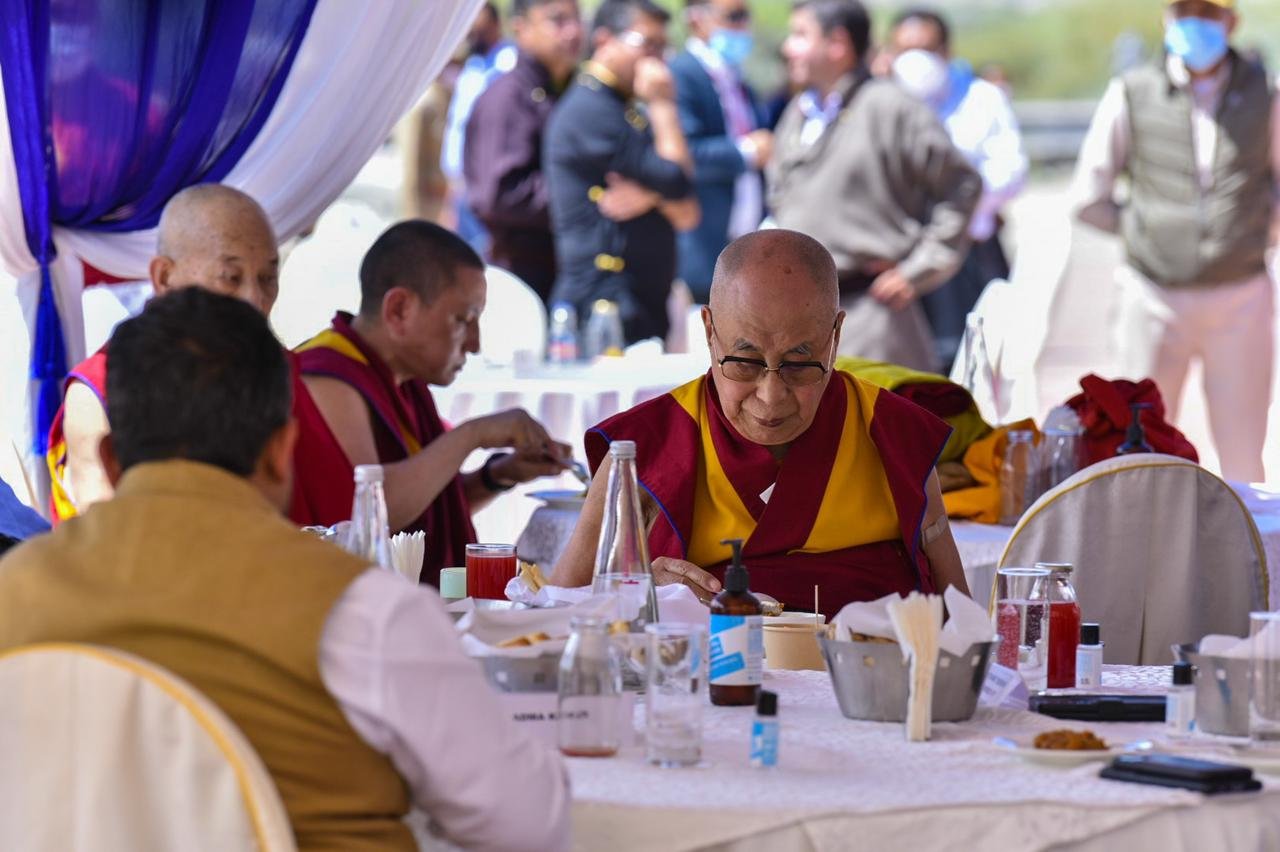 His Holiness the Dalai Lama having lunch with the dignitaries and guests during a program at Sindhu Ghat organised by the Ladakh Autonomous Hill Development Council and the Union Territory of Ladakh. Photo / Tenzin Tenkyong / Bod.Asia 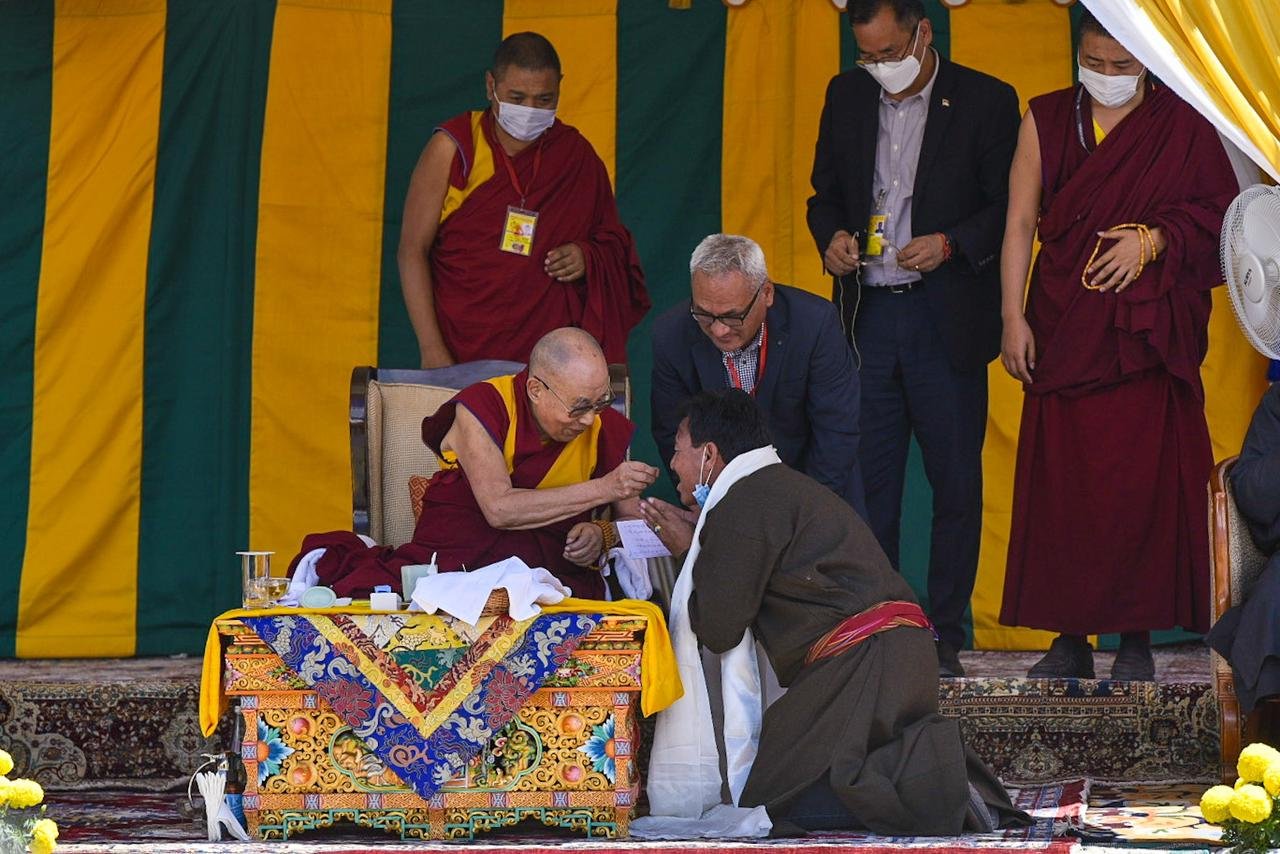 His Holiness the Dalai Lama interacting with the guests and followers during the program at Sindhu Ghat on 23 August 2022. Photo / Tenzin Tenkyong / Bod.Asia