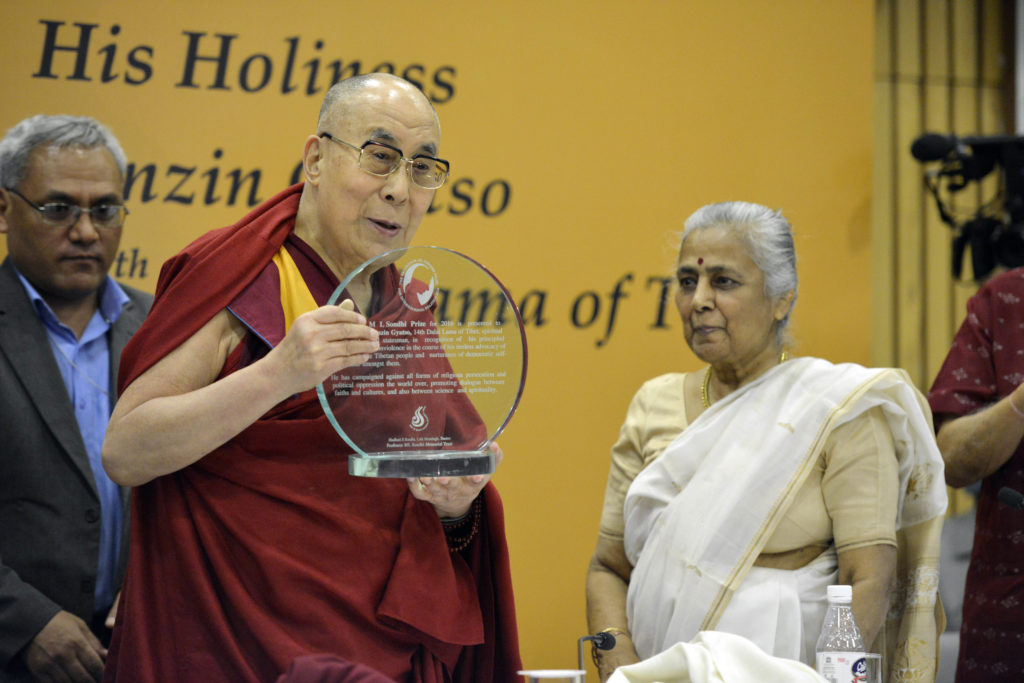 Mrs. Sondhi, the event organiser called His Holiness the biggest messenger of peace and recalled late Prof. Sondhi’s reference to His Holiness as the “catalyst of Indian Renaissance.”

His Holiness spoke of oneness of seven billion human family and said killing in the name of religion is “unthinkable.” His Holiness said that many problems in today’s world are human creation and that the major religious traditions should be the source of compassion.”

“It is now humanity’s responsibility to change the world for better, not through prayers but through realistic action, through holistic action and by developing a clearer vision. We need to promote the sense of oneness,” affirmed His Holiness.

His Holiness stressed that since the seven billion human beings want a happy life, it is only a compassionate mind that will strengthen our immune system.

Speaking on the importance of maintaining equanimity, His Holiness said, at 81, his face is quite ‘handsome’ and that the secret is his ‘peace of mind.’ “My mind is quite sharp and that is because of meditation. I spent five hours every day meditating.”

His Holiness emphatically sated there is every possibility of making the latter part of 21st century a more peaceful century if we put an effort into making it one.

Speaking on ‘rising India,’ His Holiness said the new generation of Indians can make a better and peaceful India. “During my 58 years stay in India, I am convinced that religious harmony in India is possible. Though it is the most populated and biggest democracy, yet all major religious traditions exist in India.”

His Holiness affirmatively said being in exile is a blessing because had he been in Tibet at the Potala Palace, he would be been an ‘orthodox Lama.’ “Coming to exile and seeking political asylum in India has offered me lot of opportunities especially in meeting scientists. So my mind is half Buddhist and half Scientist.”

Responding to a question on the possibility of Indo-China military conflict, His Holiness played down such possibility remarking that the situation inside Tibet mitigates such an eventuality.

Commenting on the Chinese reaction to his recent trip to Arunachal Pradesh, His Holiness said he had asked Indian authorities before the visit and went after getting their go ahead. “Some reaction from the Chinese side was really unusual and strange.”

His Holiness asserted that since India is not a small country but is gaining military power, the only thing is compromise. His Holiness jokingly said that fortunately, while he was in Tawang, no Chinese intrusion took place; otherwise this would prompt His Holiness to flee from Tawang.

Responding to a query on China renaming six places in Arunachal Pradesh post his visit to Tawang, His Holiness said, places in Tibet have also been renamed, mostly because the Chinese could not pronounce them properly.

His Holiness stressed the need to differentiate between the Chinese people and the Communist establishment, which he described as a “totalitarian” regime that has failed to crush the Tibetan spirit.

His Holiness further said the Chinese people are wonderful people and will be able to judge the situation if they are made aware of the reality of the Tibet issue. 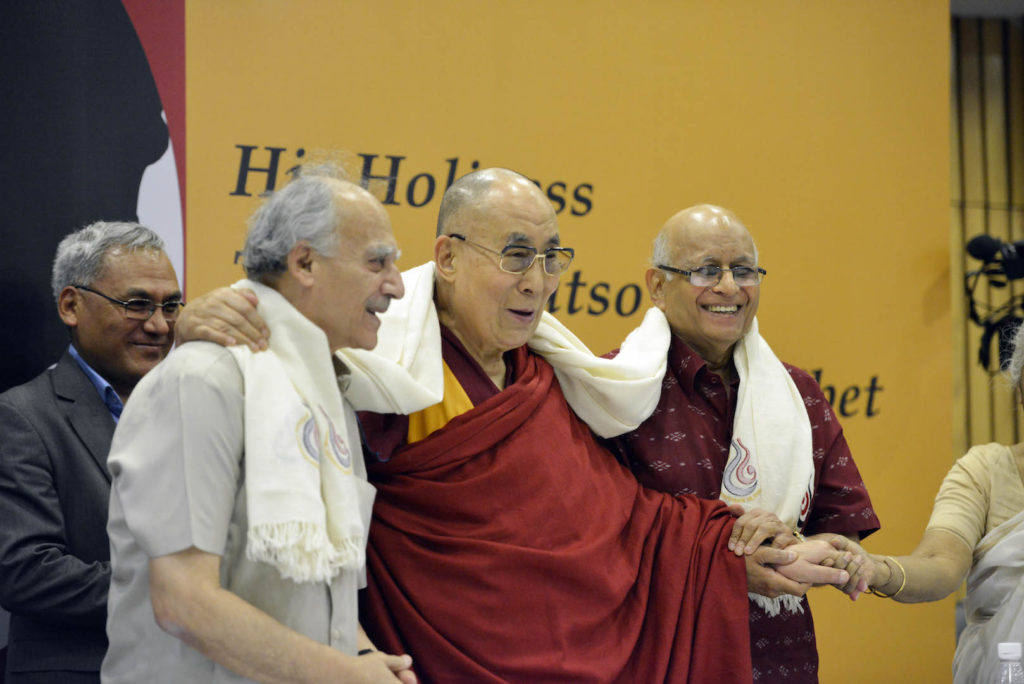 Arun Shourie, a veteran Journalist and Former Minister, Government of India while delivering the keynote address said the award is richly deserved.

“Normally, when an award is conferred to a person, it makes the person very special and it is very rare that the person who accepts the award honours the award as in today’s case,” said the Former Minister.

Shourie further said His Holiness deserves another award for being the only spiritual leader that makes us laugh so hard and so much. “He has kept our spirits high.”

Speaking on His Holiness’s imminent intellectual contribution to the discourse on frontiers of politics, Shourie remarked that His Holiness is the world’s living treasure and has the highest moral authority. “He has no aircraft, no air force, no military but whatever statement he makes and wherever he goes and he makes China react.”

Shourie further described His Holiness as someone who is learned yet wears his learning lightly. He expressed awe at the Tibetan refugees who have kept their spirits high contrary to the established notion that refugees should be bitter and despondent.

Shourie lauded His Holiness as a liberal thinking Buddhist leader and said His Holiness has been approaching his own tradition with open mind and no other leader of any tradition has this approach. “It is the openness of his mind that has opened Buddhism to examination and this is because of his confidence that truth will validate reality.”

Lalit Mansingh, former Foreign Secretary and Former Ambassador said Prof. Sondhi’s championing of the Tibetan cause stands unparalleled and were consistent with his view that His Holiness’ approach to resolving the Tibet issue is the best solution.

Mansigh further said His Holiness remains the biggest spiritual and political mentor of Prof Sondhi and that the prize honours His Holiness’ geo-political thinking, including nuclear proliferation.

“His Holiness’ politics belong to the school of real politick and the Middle Path of Buddhism will prevail.”

Mansingh said India’s stout defense of the Dalai Lama’s Arunachal trip, in early April, was a rare affirmation of the country’s sovereignty. 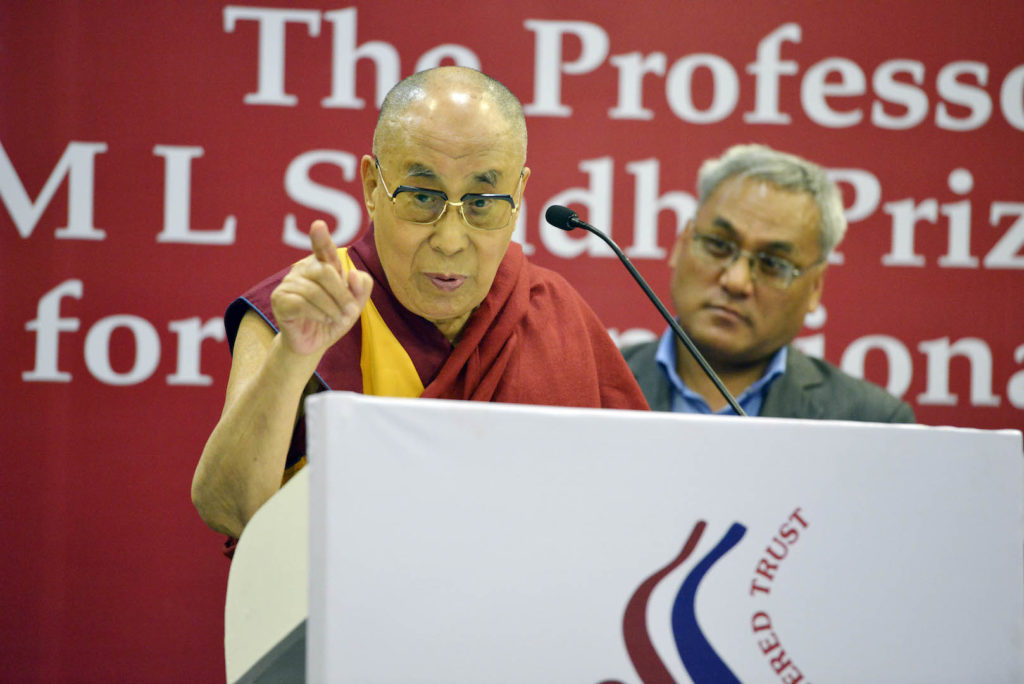 Professor Sondhi was a former diplomat and a dear friend of His Holiness and a staunch support of the Tibetan cause. Professor M L Sondhi Prize for International Politics was instituted in 2006 to honor outstanding contribution to theory and practice of international politics.

His Holiness recalled Prof. Sondhi’s contribution to the Tibetan cause and said that he was genuinely concerned and had far-sighted vision for Tibet and was not only ‘pro-Tibet’ but was ‘pro-justice.’

His Holiness concluded saying “Prof. Sondhi was immensely helpful to us right from the very beginning when were a small refugee community. Now after 58 years, we are making contribution not only to India but to China as well.”