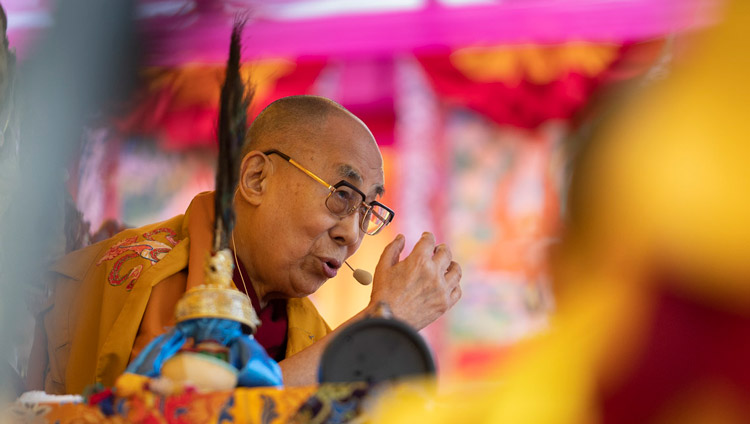 His Holiness the Dalai Lama giving an introductory talk before the actual Empowerment of Mahakarunika Lokeshvara in Manali, HP, India on August 17, 2019. Photo/Tenzin Choejor/OHHDL

Manali: Tibetan spiritual leader His Holiness the Dalai Lama gave the empowerment of Mahakarunika Lokeshvara, the Great Compassionate Lord of the World to over 8000 devotees gathered at the teaching ground in Manali.

In his introductory remarks, His Holiness said, “This empowerment comes from the collection known as the Secret Visions of the Fifth Dalai Lama. During an Avalokiteshvara retreat undertaken in the Potala Palace after consulting the Nechung Oracle, the Fifth Dalai Lama had a vision of King Songtsen Gampo, who emerged from the heart of Avalokiteshvara and led him into the mandala, where he received this nine deity empowerment.

“I received the empowerments in this collection of 25 visions from Tagdag Rinpoché when I was very young. Later, in exile, I received the longevity empowerments in the collection from Trulshik Rinpoché. I have undertaken the retreats for this and the other practices. While I was receiving this collection of empowerments, I had dreams each night related to the deities I would be introduced to the following day. Later, after coming into exile, I dreamt of a thangka depicting the Fifth Dalai Lama and then that he stood before me in person and offered me a very long silk scarf. Consequently, I feel I have a strong karmic connection with him.”

His Holiness expressed regret about the very wet weather and asked the congregation to recited Avalokiteshvara’s six-syllable mantra steadily while he performed preparatory rituals for the empowerment.

“People who cannot be here have asked if they can take the empowerment remotely by attending to the webcast. I’ve told them they can. There is a precedent from the Buddha’s life. On some occasions, where people who wished to take monastic ordination, but were unable to meet the Buddha in person, arrangements were made by message for them to do so at a distance. Likewise, people in Taiwan and elsewhere who have firm faith in Avalokiteshvara and an intention to take the empowerment, can do so wherever they are.”

“In our daily lives we tend to rely on our five senses, but once we have fallen asleep our sensory perceptions cease, although our mental consciousness continues to function. In Highest Yoga Tantra there are techniques for employing the dream state in the practice of yoga. There’s an opportunity to access the luminous innate mind of clear light. This opportunity also occurs when we faint and at the time of death. There are cases of experienced meditators whose subtle consciousness remains in the body after clinical death when the circulation has stopped and the brain has ceased to function.

“The mind of clear light that is manifest through the techniques of Highest Yoga Tantra is combined with an understanding of emptiness as explained in the perfection of wisdom teachings. The Nyingma tradition describes nine vehicles of which the highest are the inner tantras—Maha, Anu and Ati yogas. Atiyoga does not make use of our ordinary mind, but pristine awareness itself.

His Holiness told his audience that the principal deity of the empowerment, Mahakarunika Lokeshvara, is clearly depicted by the sandalwood statue known as Wati Zangpo. The statue had belonged to the monks of Dzongkhar Chödé Monastery in Tibet, but is now in His Holiness’s care in Dharamsala. He recounted a dream in which he conversed with the image and asked if he had realized emptiness, “Yes,” the statue replied. “Directly,” His Holiness asked, “Yes,” the statue again replied.

At the point in the empowerment where he was to give the Bodhisattva Vows, His Holiness explained that there are two intentions involved in the generation of bodhichitta: to benefit others and to attain enlightenment. In other words it is the intention to become a Buddha in order to benefit all sentient beings.

Later, His Holiness mentioned that as part of his analytical meditation he often focuses on a verse from Nagarjuna’s ‘Fundamental Wisdom of the Middle Way’ that examines the Tathagata.

When the morning’s ceremonies were complete, as is his custom, His Holiness came to the front of the stage and waved to the crowd in several directions before leaving the ground. He drove the short distance to the Himalayan Nyingmapa Buddhist Monastery where he saluted the images of the Buddha and Guru Padmasambhava. From the temple he was escorted to a pavilion where he was served lunch. Before returning to Ön Ngari Monastery nearby, he sat for photographs with members of the Nyingmapa community.

His Holiness announced that tomorrow he will teach the ‘Eight Verses for Training the Mind’ and the ‘37 Practices of Bodhisattvas’. 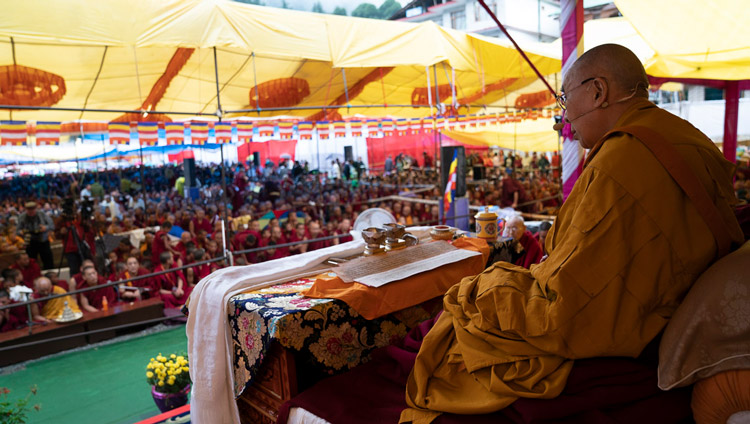 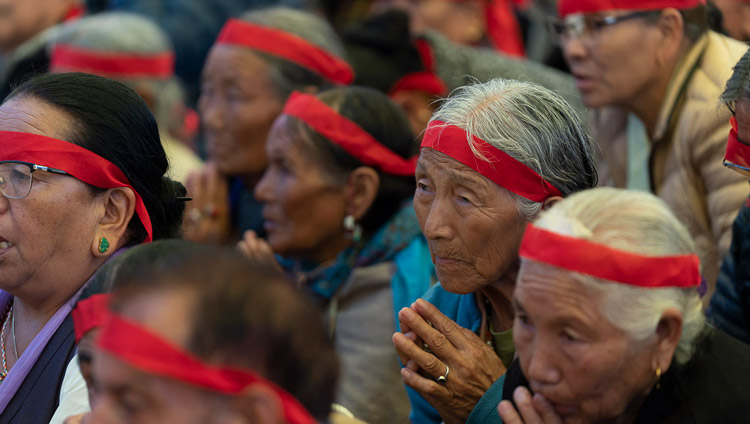 Devotees wearing ritual blindfolds as His Holiness the Dalai Lama gives the Empowerment of Mahakarunika Lokeshvara in Manali, HP. Photo/OOHDL 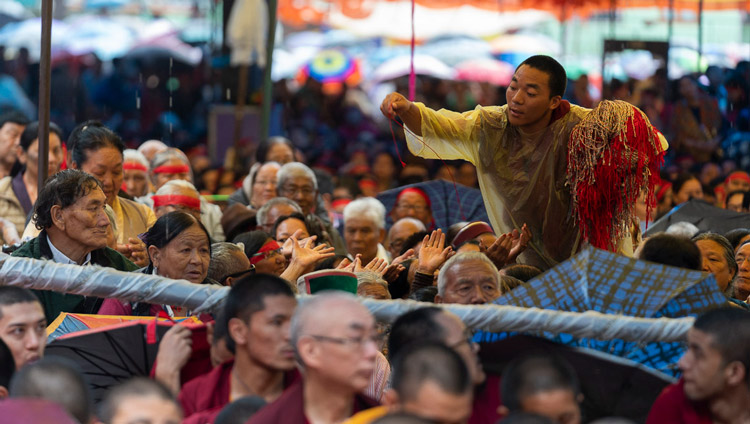 A volunteer passing out ritual protection cords as His Holiness the Dalai Lama gives the Empowerment of Mahakarunika Lokeshvara in Manali, HP. Photo/OOHDL