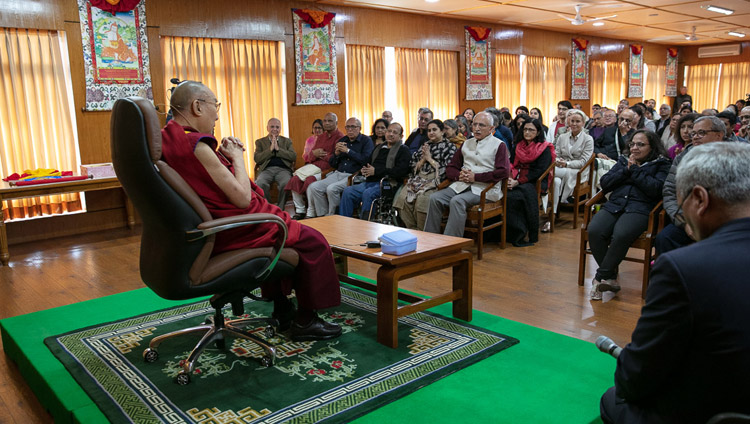 His Holiness the Dalai Lama speaking on secular ethics to entrepreneurs and management graduates at his residence in Dharamsala, HP, India on November 7, 2019. Photo by Tenzin Choejor

Dharamshala: A group of Indians, many of whom graduated from the Indian Institute of Management, Ahmedabad, in 1979, who is attending a conference in Dharamsala on secular ethics, came to visit His Holiness the Dalai Lama this morning. They were joined by business leaders from the Zuckerberg Institute who are here to learn about Tibet in the context of their global ethics in the business agenda.

His Holiness greeted them as brothers and sisters and told them how important it is to emphasize that as human beings, we are all the same.

“In the 21st century, the world belongs to us 7 billion human beings and each country belong to the people who live there, not their rulers. Basic human nature is compassionate because we are social animals. Community is the basis of our survival and nowadays technology has helped humanity become one community.”

He commended the longstanding Indian traditions of ‘ahimsa’—non-violence and ‘Karuna’—compassion, which he stressed remain relevant today. He also noted that the general Indian practices for developing a calmly abiding mind and insight into reality have given rise to a profound understanding of the mind and ways to tackle destructive emotions. 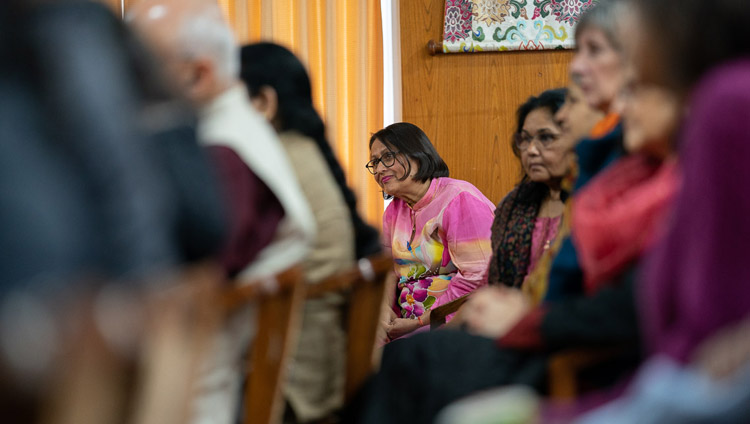 Members of the audience listening to His Holiness the Dalai Lama speaking during his meeting with entrepreneurs and management graduates at his residence in Dharamsala, HP, India on November 7, 2019. Photo by Tenzin Choejor

In the past, he observed, centers of learning were mostly associated with religious institutions. Modern education with its materialistic goals pays little attention to inner values and the mind. Religions teach how to achieve peace of mind, but in many places, the influence of religion is in decline.

“I’m a great admirer of the spirit of the European Union and its emphasis on the common good. Since peace has prevailed among the EU’s members for more than 70 years, I consider this spirit to be a hopeful sign of human maturity.

“Climate change is an urgent crisis facing the human community. Here in Dharamsala, where I’ve lived since 1960, snowfall is clearly reduced. Scientists are expressing serious concern about the consequences for our environment. Greta Thunberg is prompting people to take action, which is wonderful. One participant in a recent meeting on the environment recently told me that if we do nothing, within 80 years much of the world will be desert. The challenge of climate change is a vivid reminder that we have to think of the good of the whole of humanity. 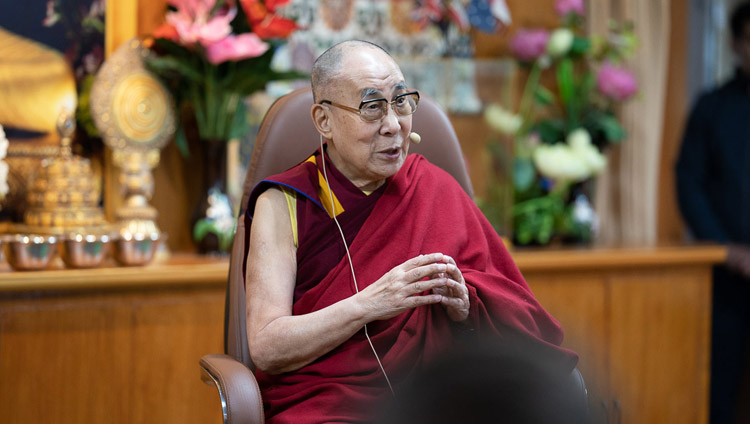 His Holiness the Dalai Lama addressing the gathering during his meeting with entrepreneurs and management graduates at his residence in Dharamsala, HP, India on November 7, 2019. Photo by Tenzin Choejor

“The purpose of our lives is to be happy and joyful. Peace of mind is essential to this and to achieve it we have to learn to tackle our disturbing emotions on the basis of a better understanding of the workings of the mind. A clearer understanding of the reality that people and things don’t exist as something solid from their own side, as they appear to do, can be very helpful. Observations from quantum physics back this up.
In answering several questions from the audience, His Holiness pointed out that since dealing with hostile people can teach us patience, we can view our enemies as teachers. He distinguished two levels of compassion—compassion for our friends and relatives that are influenced by attachment and compassion even for our enemy that is genuine compassion.

He repeated his conviction that peace in the world depends on individuals finding a secular approach to peace of mind.

Invited to comment on ‘desire’, His Holiness remarked that it’s useful to differentiate realistic from unrealistic desire adding that the desire to be a good human being is a positive desire. 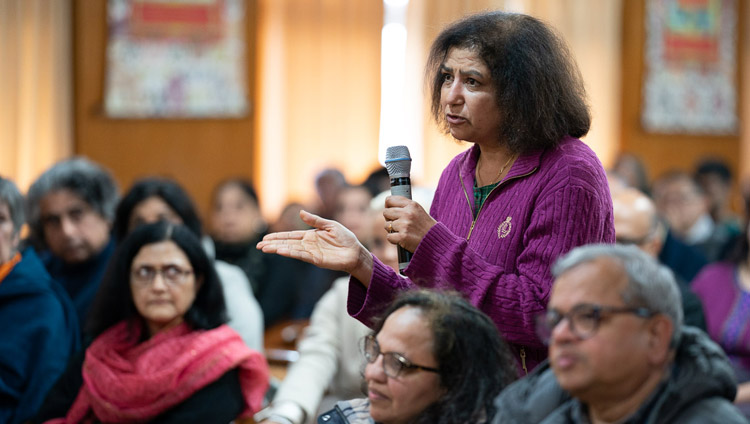 A member of the audience asking His Holiness the Dalai Lama a question during his talk on secular ethics to entrepreneurs and management graduates at his residence in Dharamsala, HP, India on November 7, 2019. Photo by Tenzin Choejor