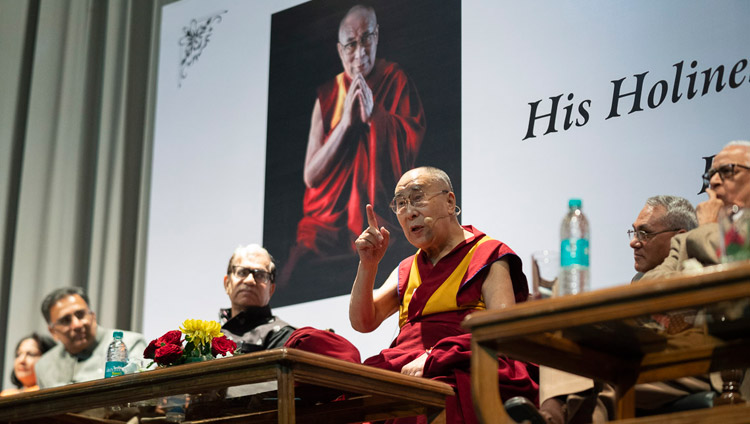 His Holiness the Dalai Lama addressing the gathering at the 1st Yuvraj Krishan Memorial Lecture at Siri Fort Auditorium in New Delhi, India on December 8, 2018. Photo by Lobsang Tsering/OHHDL

Remembering late Shri Yuvraj Krishan, His Holiness said his relationship with the former Deputy CAG came about after coming to exile in India in 1959.

“After I’d moved to Mussoorie, Pandit Nehru came to see me and I was able to report what had happened. In 1960, I settled into Swarag Ashram above McLeod Ganj, but there was no room to expand. Consequently, we looked at other properties and were able to buy Yuvraj Krishan’s house and estate, which is where I live now.”

He recounted the day in April 1959 when he crossed the border and was welcomed by Indian officials whom he remembered fondly.

“The day in April 1959 when I crossed the border a new life began. I met officials whose faces I recognised and I felt safe. It was one of the happiest moments of my life.”

“After 1956 the Chinese communists began to carry out reforms in Tibet. It’s not that Tibet didn’t need to be reformed, but whatever changes were to be made had to be realistic and not imposed from outside. The Chinese started to enforce reforms as they had in their own land where many landlords exploited their tenants.

He said the situation was different in Tibet as Tibet was a country that followed the Buddha’s advice such that even insects were protected. “It was a compassionate society.”

“Imposition of reforms provoked revolt, first in Kham, next in Amdo, then across the whole of Tibet. I tried my best to cool things down, but eventually had no choice other than to escape.

“On 10th March 1959 virtually the entire population of Lhasa came and surrounded the Norbulingka Palace to protect me and prevent my arrest. I tried to persuade them to disperse and wrote letters to the Chinese officer in charge. I also received a message asking me to identify in which rooms I was staying in order that they could be protected, although it wasn’t clear if this was the real intention or whether they wanted to know where to target. After 10th March there had been troop movements by night and on 16th March, artillery in front of the Potala that had previously been covered up was on open display.” 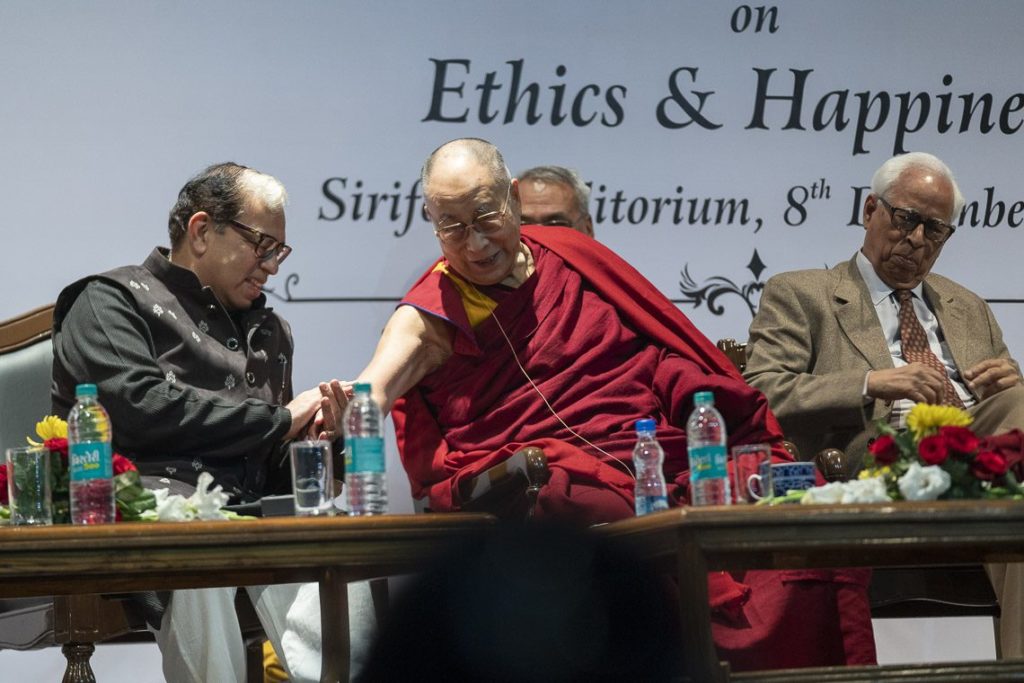 He said: “When I left Lhasa on 17th March our intention was to reach southern Tibet and stop there to negotiate if possible. However, the bombardment of Lhasa that began on 19th March put an end to that idea. We were unsure whether the Government of India would give us asylum until we received a message of welcome.”

His Holiness spoke proudly of the longstanding relations between India and Tibet; the derivation of Tibetan script from Devanagari; and the flourishing of Nalanda based Buddhist tradition from India to Tibet under the leadership of Tibetan Dharma King and Indian master Shantarakshita who established the Nalanda Tradition in Tibet.

He said originally Indians were the gurus and Tibetans were the students, but since the knowledge Tibetans have preserved has been neglected in the land of its origin, roles have been reversed.

He also acknowledged the generous support of the Government of India and state governments towards the Tibetan refugee community in exile. He noted that Tibetans have become a relatively successful refugee community.

Former TV anchor, Vikram Chandra moderated a question and answer session, in which His Holiness implored the media organisations to shoulder greater moral responsibility towards the community in addition to serving sensationalist stories.

“Media people should also inform the public that peace of mind is achieved through mental training. If we emphasize secondary differences of nationality, faith or race, it only leads to division. We are all the same in being human; mentally, physically and emotionally the same.”

Responding to a question about bringing up children His Holiness recommended asking them if they preferred to have friends or enemies. Then pointing out that smiling leads to trust and trust is the basis of friendship. 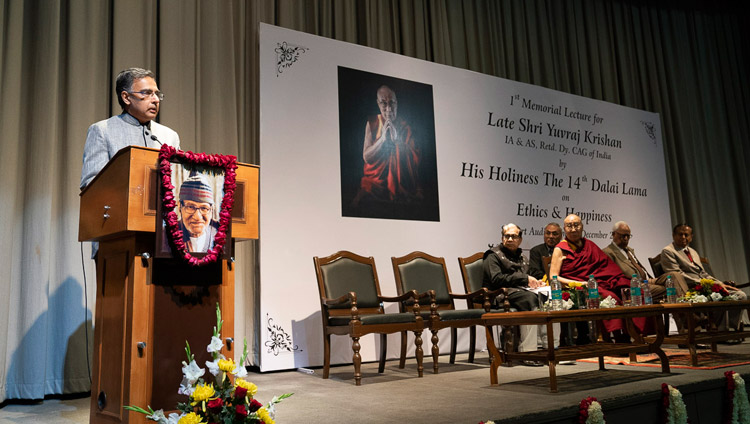 His Holiness was asked how people facing grief or ill-health can find happiness and he referred to Shantideva’s advice that faced with a problem it’s necessary to examine whether you can overcome it or not. If you can, you should do what needs to be done—no need to worry. If you decide you can’t overcome it, worrying about it is of no use.

“As I grow older I watch younger people running here and there and am reminded that I can’t do that anymore. But regret about it is of no use. It’s understandable to grieve when those close to you like your parents die. In my own case, when my senior tutor, who had taken care of me since childhood, died, I felt like I’d lost the rock I’d been leaning on. Then it occurred to me that instead of spending time in grief and sorrow I’d be better trying to fulfil his wishes with enthusiasm and determination.”

Shrikant Krishan, son of late Yuvraj Krishan spoke about the family estate ‘The Brig’ which, at present, houses the Tibetan spiritual leader.

Shrikant Krishan recalled his own first meeting with His Holiness in 2002 and being struck by what he had to say. On that occasion, he had pointed out that when we’re angry we generally feel that it is the person we’re angry with who is harmed by it. However, His Holiness observed that if we think more carefully we might see that it’s we who lose because our anger destroys our peace of mind. His Holiness’s remark in his letter of condolence to the family when their father passed away that he had lived a meaningful life brought them great solace.

Shri NN Vohra, former Governor of Jammu and Kashmir, told the audience how happy and privileged he felt to be participating in the 1st Yuvraj Krishan Memorial Lecture with His Holiness. He recalled that after His Holiness was settled in McLeod Ganj, he was deputed to serve him. 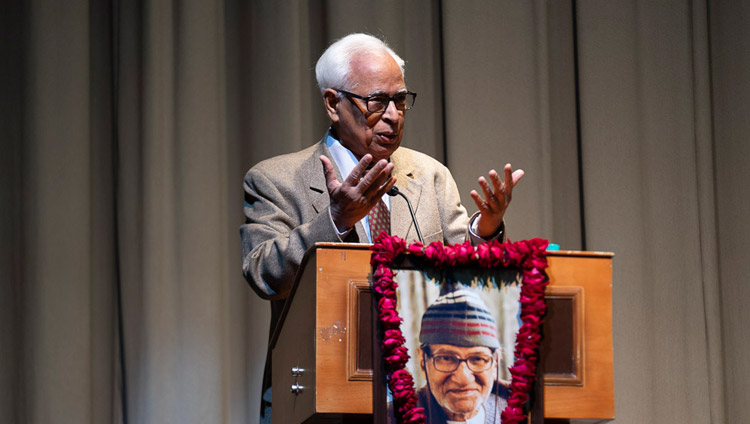 Mr NN Vohra, Former Governor of Jammu and Kashmir, relating his past meetings with His Holiness the Dalai Lama at the 1st Yuvraj Krishan Memorial Lecture at Siri Fort Auditorium in New Delhi, December 8, 2018. Photo by Lobsang Tsering/OHHDL

Supreme Court Judge, Justice AK Sikri, in his remarks, quoted a story in a book by a follower of His Holiness the French monk Matthieu Ricard that shows how many of us do not give sufficient value to what happiness is or to how it can be achieved. When an American photographer friend answered how she saw her future unfolding by saying she simply hoped to be happy, her friends were taken aback by her unaffected reply. Another friend told of listening to a Tibetan in Tibet recounting the distressing experiences he had undergone without anger or vengefulness, but with equanimity.

Vikram Chandra told His Holiness it had been a privilege to listen to him. S Sathyamoorthy, CEO of the Anti-Corruption Academy, offered the concluding remarks. 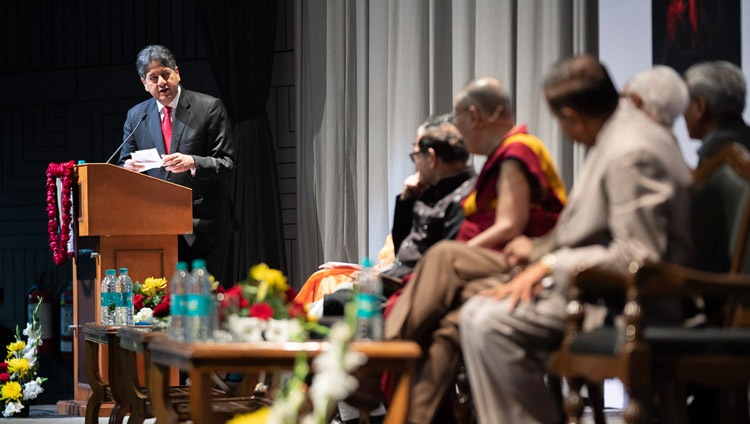 Former TV anchor Vikram Chandra reading a question from the audience for His Holiness the Dalai Lama during the 1st Yuvraj Krishan Memorial Lecture at Siri Fort Auditorium in New Delhi, December 8, 2018. Photo by Lobsang Tsering/OHHDL 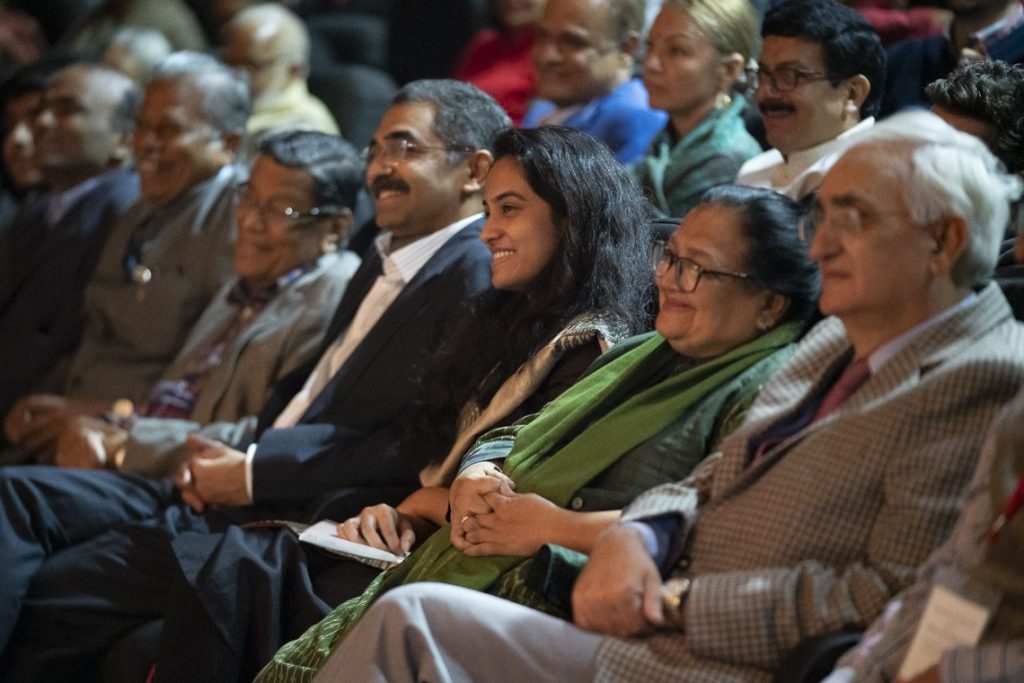 Some of the more than 350 invited guests listening to His Holiness the Dalai Lama’s address at the 1st Yuvraj Krishan Memorial Lecture at Siri Fort Auditorium in New Delhi, December 8, 2018. Photo by Lobsang Tsering/OHHDL