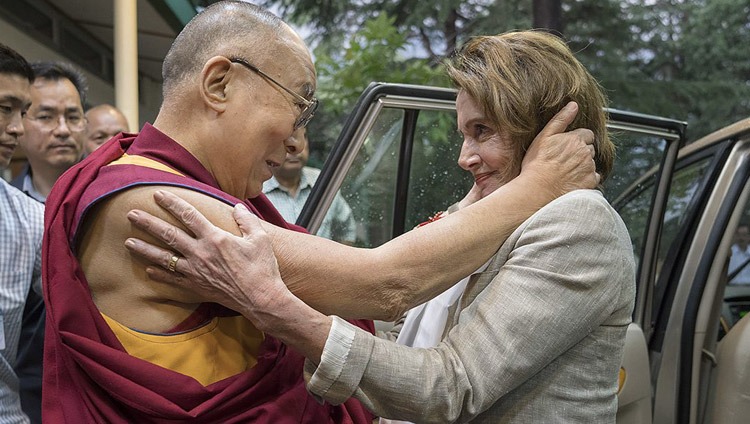 His Holiness the Dalai Lama greeting his friend then House Democratic Leader Nancy Pelosi as she arrives at his residence leading a bipartisan US Congressional Delegation on a visit to the Tibetan community in Dharamsala HP, India on May 9, 2017. Photo by Tenzin Choejor/OHHDL

Dharamshala: In a video message released earlier by the Office of His Holiness the Dalai Lama, the Tibetan spiritual leader congratulated US House of Representatives Speaker Nancy Pelosi on winning the National Democratic Institute’s Democracy Award.

Speaker Pelosi was honoured with the Democracy Award in recognition of her groundbreaking leadership as a woman political leader and for her staunch defense of democracy and human rights around the globe. The award ceremony was held on 8 December.

Congratulating Pelosi, His Holiness said he deeply admired her firm stance on truth and her courageous support for the Tibetan struggle.

Pelosi has been one of the staunchest supporters of His Holiness the Dalai Lama and the Tibet cause for decades. She is also a fierce critic of China’s human rights record in Tibet. In November 2015, she led a delegation of congressional leaders to Tibet where she told the Chinese officials there that they had come as a friend of His Holiness.

“You visited Tibet and also came here. So I really appreciate it. For Tibetans, your life is very very precious and important,” said His Holiness.

“So I very much want to express today, Nancy Pelosi, for being conferred the National Democratic Institute’s Democracy Award,” he said. “I pray for your long life and health.”

NDI is a Washington-based institute established in 1983 in response to a call from former U.S. President Ronald Reagan to promote freedom and democracy around the world.