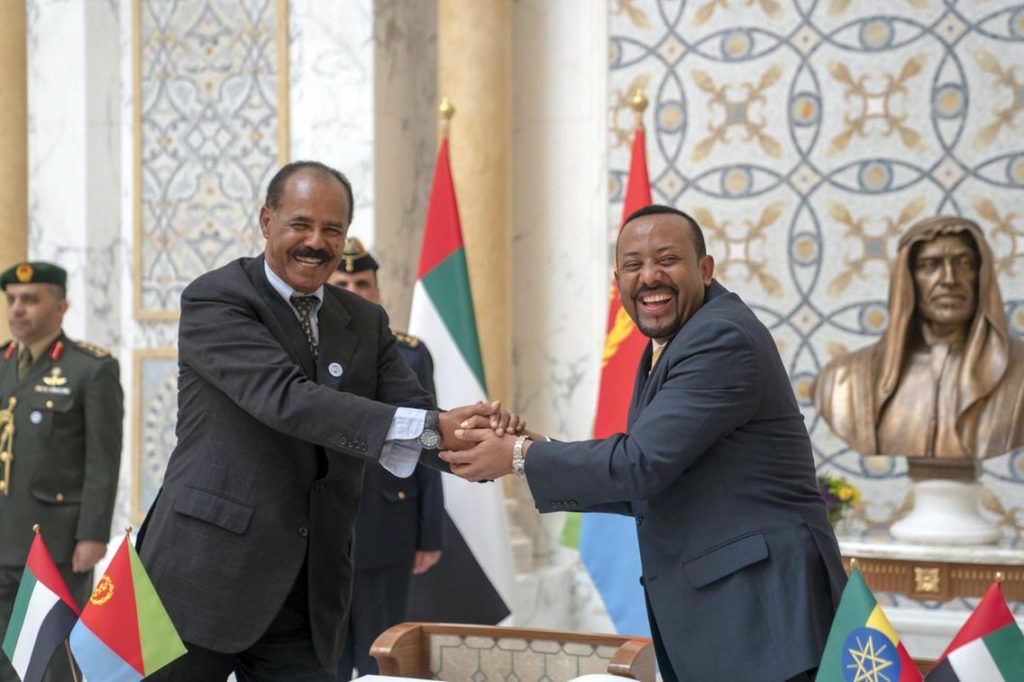 The 2019 Nobel Peace Prize has been awarded to Ethiopian Prime Minister Abiy Ahmed (right) who made peace last year with long-time foe Eritrea (Eritrean President on the left). The two shook hands at the presidential palace in Abu Dhabi in July. Crown Prince Court – Abu Dhabi

Dharamshala: With the announcement that Abiy Ahmed Ali, Prime Minister of Ethiopia is to be awarded this year’s Nobel Peace Prize for his efforts to achieve peace and reconciliation between Ethiopia and Eritrea after decades of tension and conflict, His Holiness the Dalai Lama has written to congratulate him.

“The establishment of friendly relations between neighbours like Ethiopia and Eritrea will benefit not only the citizens of those countries,” His Holiness remarked, “but will also set an example for countries everywhere to work for their common good. I am encouraged too, to learn of your contribution to the search for peace elsewhere in East and North-east Africa.

“The way you reached out to President Isaias Afwerki of Eritrea and his positive response and willingness to enter into dialogue has helped to make possible the peace process. The two of you have demonstrated through your actions what I consider to be a simple truth—genuine reconciliation is possible in a spirit of mutual respect.

“I am also encouraged by your focus on the environment, including the initiative to plant trees in Ethiopia to counter the effects of climate change.”

At the end of his letter, His Holiness noted that he shares the Nobel Committee’s hope that a peaceful, stable and successful Ethiopia will have many positive results, and will help to strengthen not only brotherhood and sisterhood among nations and peoples in the regions, but will also further development and prosperity on the continent. Sourced from dalailama.com.