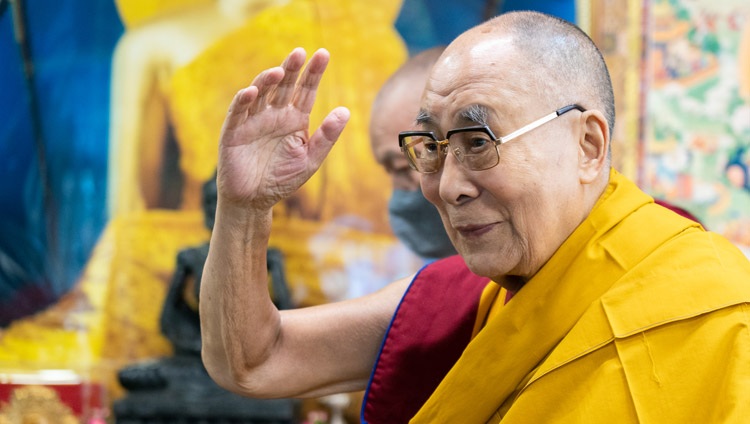 His Holiness the Dalai Lama waving to the virtual audience as he arrives for the second day of his conversation with USIP Generation Change Fellows at his residence in Dharamsala, HP, India on October 15, 2021. Photo by Ven Tenzin Jamphel

His Holiness the Dalai Lama opened the second day of conversation with USIP Generation Change Fellows by wishing them good morning and expressing the hope that they had slept well.

“We’re meeting again,” he told them, “And I want you to know that I very much appreciate the discussions we’re having.”

Lise Grande, President and CEO, US Institute of Peace, responded that it was a great pleasure to talk to His Holiness for a second day. She mentioned that today’s theme was the education of the heart and mind and that the virtual audience would be honoured to hear what he had to say about that.

“The last century was filled with such violence that some people think that it’s normal and of benefit,” His Holiness replied. “Great effort has gone into making weapons, especially nuclear weapons. But now the world is thinking more seriously about peace. Countries have become interdependent within the global economy. And in that context war has become irrelevant. Disputes and disagreements must be resolved by talking—through dialogue.

“We must educate the younger generation about how the world has changed. These days it’s realistic to work for co-existence on global level. It’s no longer appropriate to thinking only of ‘my country’. We must educate the young to think about how to achieve genuine world peace. We have to take the entire world, the whole of humanity, into account on a global level. And on top of that, of course, there is the problem of global warming.

“The younger generation must be more broad-minded. They need to adopt a broader perspective, not simply repeating what was experienced in the past.

“When I reached India as a refugee, I found I had the opportunity of meeting so many more people. I reflected that if you find yourself lost in some remote place and someone else comes into view, you don’t concern yourself with where they come from or what faith they follow. You’re simply happy to encounter another human being.

“This is the point. We are all human beings and we all have to live together on this planet. When I meet people in different countries, who follow different religions and perhaps are of a different colour, I simply reflect that we are all the same in being human. We have to help each other. This is why I promote a recognition of the oneness of humanity.

“We must explain to young people that we are all members of the same human family. One urgent reason for concerning ourselves with the oneness of humanity is global warming. No exceptions are made for this or that nation; it affects us all.

“Scientific research has confirmed the importance of achieving peace of mind. If a community is peaceful and motivated by loving-kindness, its individuals will be more peaceful too.

“I hope that education will mean that young people will not repeat the mistakes of the past.” 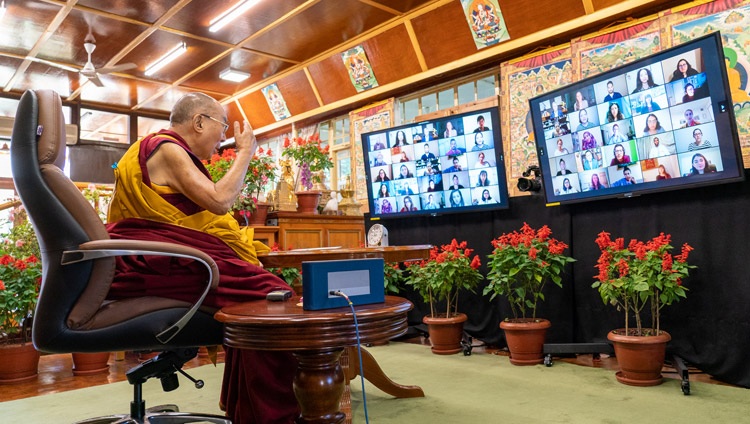 His Holiness the Dalai Lama addressing the virtual audience of USIP Generation Change Fellows during their online conversation from his residence in Dharamsala, HP, India on October 15, 2021. Photo by Ven Tenzin Jamphel

Lise Grande thanked His Holiness for drawing attention to the link between peace of mind and peace in the world. She began to introduce USIP Generation Change Fellows who had questions for him. First of all, Sophia Santi from Venezuela told the story of a professor who rebuked a student when he was unable to answer her question. Sophia wanted to know what His Holiness might say to such a teacher.

“It is inappropriate for a teacher to rebuke or humiliate a student in the way you describe. Even from the teacher’s point of view it’s a mistake. Someone that students regard as a wonderful teacher will be happy with their relationship, whereas a teacher who is regarded with wariness will be ill at ease. Good relations between teacher and student are very important. Even if a student’s question is silly and foolish, they should be able to ask it and the teacher should answer it with respect.”

Faten Khalfallah from Tunisia asked about His Holiness’s relations with his teachers. “I had two main teachers,” he replied, “one of whom mainly taught me the great philosophical treatises. He instilled great hope in me that I could become a sound philosopher. He was encouraging and filled me with enthusiasm. Sometimes he wore a serious face, but in general he gave me hope and encouragement.”

Nicholas Songora from Kenya told another story of being humiliated by a resentful teacher. He also asked His Holiness how he regards teacher-student relations.

“If we have a kind and compassionate teacher,” His Holiness told him, “Even when the subject is difficult, students find it easier to understand. When their teacher treats them with disdain, students tend not to learn so well. Students should be able to ask question after question. Nowadays, the internet provides us with many ways to learn, but the living experience of a concerned teacher remains most effective.”

Tania Rosas from Colombia described the inspiration she had drawn from her grandmother, an educator who set up her own school. She remarked that educational opportunities have changed since her grandmother’s time. She wondered how His Holiness views the future of education.

He expressed admiration for the audio and video clips available over the internet and the many prospects to gather information. As time goes on, technology can help students learn so many things that they naturally become more broad-minded instead of just repeating old ways of thinking. He voiced the hope that this will mean that in future young people will take more account of the whole of humanity. 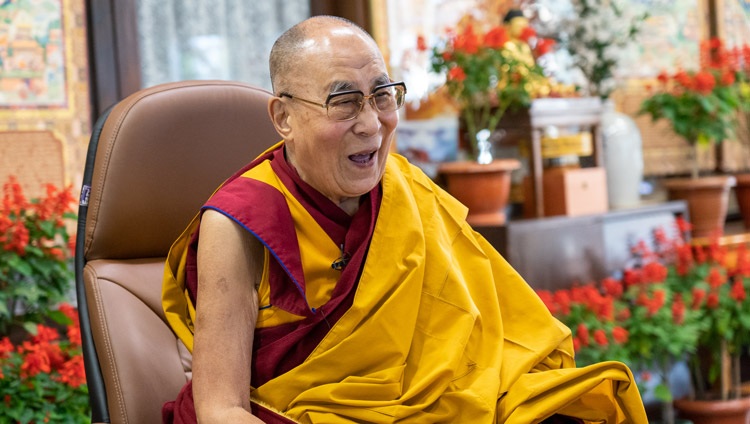 His Holiness the Dalai Lama enjoying a moment of laughter during his online conversation with USIP Generation Change Fellows at his residence in Dharamsala, HP, India on October 15, 2021. Photo by Ven Tenzin Jamphel

Soukaina Hamia from Morocco met His Holiness twice in 2016. In describing the impact meeting him had had on her she said it had taught her that education is the answer, the way and the path to happiness, peace and enlightenment. She revealed that meeting His Holiness had made her a better Muslim. It also reminded her reminder that education is compatible with religion, and this is why the first word in the Holy Quran is: “Read”.

“Despite philosophical differences,” His Holiness responded, “the essence of all religious traditions is the same—loving-kindness. Sometimes holding intellectual arguments is useful and can be stimulating, but at other times, for example at the time of death no one wants to argue. They just want to be at peace.”

Lise Grande asked several questions on behalf of peace-builders who could not join the conversation online. Luisa Romero from Colombia’s question was about identity in relation to stigma like nationality, race and religion. His Holiness responded that religion naturally influences society’s ways of thinking, which may include prejudices about race and gender. However, it is also the case that all major religious traditions convey a common message about the importance of loving-kindness. As new circumstances emerge, there is a need for new ways of thinking.

Kuany Charles Ngor from South Sudan wanted to know how to let go of negative attitudes. His Holiness told him that as human beings we are intelligent. We can think and reason. The reality in which we live is that everything is interdependent, so we have to adopt a more holistic, broad-minded view.

Daniella Liendo from Venezuela asked how to deal with things that it seems can’t be changed. His Holiness repeated that we have the potential to think more holistically. He recommended that if problems can’t be overcome, it’s better to accept them as they are. He quoted an ancient Indian teacher who advised that if an obstacle can be overcome, that’s the course of action to take. If it can’t be overcome, worrying about it won’t be of any help.

Answering a question from Lise Grande about how religious leaders can promote humanism His Holiness observed that different philosophical points of view, looking at things from different angles, can be very helpful. He suggested that if a restaurant were only to offer the same food all the time people would easily be bored. Different ways of thinking are like different kinds of food for the mind. They can be challenging and stimulating. 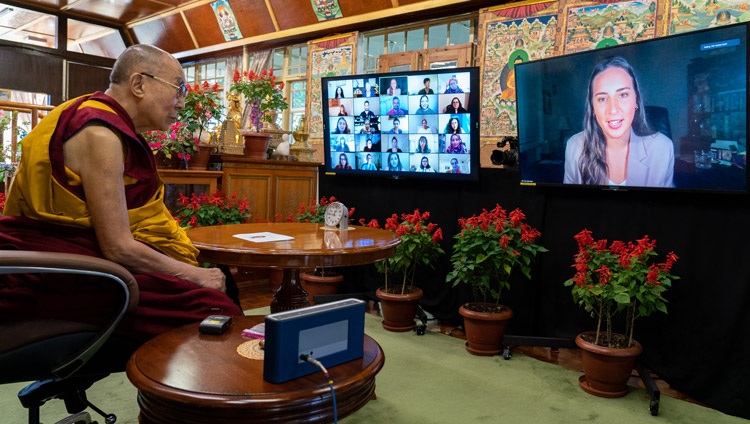 A member of the virtual audience asking His Holiness the Dalai Lama a question during his conversation with USIP Generation Change Fellows at his residence in Dharamsala, HP, India on October 15, 2021. Photo by Ven Tenzin Jamphel

Asked for his general advice for USIP Generation Change Fellows His Holiness replied:

“In life we naturally face difficulties. If we allow ourselves to become demoralized, that’s a real failure. In my own life I’ve encountered all sorts of problems, but I’ve never felt discouraged. I believe we can always use our intelligence and look at whatever complication besets us from a wider perspective. We should use our human brains with human determination.”

Lise Grande brought the conversation to a close by thanking His Holiness and the other participants. She also thanked those who had enabled the conversation to take place. She looked forward to being able to talk to His Holiness again next year. Kalden Lodoe, Tibetan News Director for Radio Free Asia and a coordinator of these meetings also offered words of thanks to various people who have provided crucial support for these conversations.

As his final remark, His Holiness recited verses from an ancient Indian book that he repeats to himself daily, the gist of which are as follows:

Illuminated by rays of wisdom the bodhisattva sees as clearly as a gooseberry on his open palm that the three realms of existence in their entirety are unborn from the very start, and through the force of conventional truth, he journeys to cessation. He also generates compassion for beings bereft of protection and like a king of swans soaring ahead of other accomplished swans with white wings of wisdom and compassion spread wide, he cruises to the excellent far shore.

He declared that these words give him great confidence and reiterated that although we may follow different traditions, it’s good to share our experiences with each other.