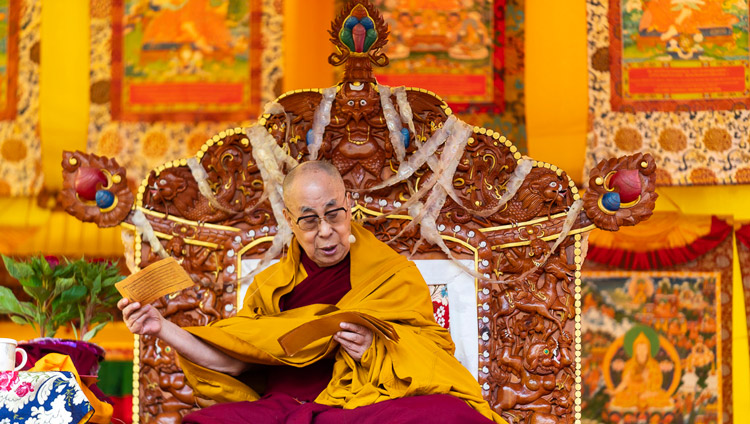 His Holiness the Dalai Lama reading from the text on the final day of his teachings in Manali, HP, India on August 18, 2019. Photo by Tenzin Choejor/OHHDL

Manali: His Holiness the Dalai Lama concluded his teachings in Manali on Sunday with a short discourse on the Eight Verses for Training the Mind and gave the transmission of the mantras of the Buddha, Avalokiteshvara, Manjushri and Arya Tara. His Holiness received the explanation of the text of the Eight Verses from several of his teachers including Kyabjé Trijang Rinpoché, and has been reciting it daily since.

“Today, we’ll look at the ‘Eight Verses for Training the Mind’,” His Holiness remarked, opening a copy of the book containing the texts he was teaching in Tibetan, Hindi, English and Chinese.

“Geshé Langri Thangpa was known for his practice of bodhichitta. Thinking of the sufferings of sentient beings he was so moved he wept. His face wore a perpetual doleful expression.”

“Ask yourself what the word ‘I’ in the first verse means. We have feelings and sensations that seem to be like facilities for the ‘I’ that is their user and is the controller of the body and so forth. Non-Buddhists assert that the ‘I’ is something separate from the body-mind combination, but Buddhists say it can’t exist apart from that. Some assert that the ‘I’ or person can be identified with mental consciousness. The Mind Only school, for example, refer to the foundational consciousness in this way.

“However, the Middle Way School states that the ‘I’ or the person is merely designated on the basis of the body-mind combination, just as other things in the world are designated by our projections and preconceptions. The purpose of this instruction is to counter our misconception of an independent self. Middle Way scholars don’t say there is no conventional existence, they say things have no objective existence.

“We make ourselves unhappy because our sense of an independent self makes us selfish, on the basis of which we express all kinds of emotions. Day to day experience tells us that selfish people tend to be more easily upset, whereas those who are compassionate and naturally concerned about others are more broadminded and relaxed.

“Since we don’t want suffering and do want happiness, we need to reduce the causes of suffering and increase the causes of happiness. As human beings this is something we can think about and put into effect. The first verse shows that fulfilling our short and long term goals is dependent on others. Avoiding the unwholesome actions of killing, taking what is not given, sexual misconduct, as well as acts of unwholesome speech is done in relation to others. Because happiness comes about in relation to them, the second verse advises ‘Cherish others as supreme’.”

His Holiness stressed that as human beings we should respect each other. Should it be the case that we are kind to someone who then takes advantage of us, we shouldn’t let our compassion fade. Whatever prompts afflictive emotions to arise, we should counter them. They stoke the self-cherishing attitude that leads to ruin.

“Whenever we see people who are really suffering, we shouldn’t be condescending but compassionate to them. For example, we should give to beggars respectfully. Giving respectfully is one of the sixteen factors that give rise to higher rebirth. In verse 5 we read, ‘May I accept defeat’. When one follower of the Kadampa tradition was subject to another’s criticism, he asked his friends not to respond, saying, ‘I’ll take the defeat upon myself’. The next verse refers to an occasion when we may have helped someone who shows no appreciation. The appropriate response is to view that person as our teacher.

“The lines in verse 7, ‘May I give all help and joy to my mothers, And may I take all their harm and pain secretly upon myself,’ summarizes the practice of ‘Giving and taking’. When you breathe in imagine taking the pain and suffering of others on yourself, and when you breathe out, imagine giving them joy. This is what I did when news of demonstrations in Lhasa in 2008 made me apprehensive about what might happen. I imagined taking anger and hostility away from the Chinese officials involved in the incident and giving them peacefulness and joy.

“The final verse advises us, when we do these practices, not to be carried away by worldly concerns such as a desire for good reputation and fame. The line, ‘May I see all things as illusions’ refers to ultimate bodhichitta, which the Middle Way School characterizes as nothing having objective existence—things only exist by way of designation.” 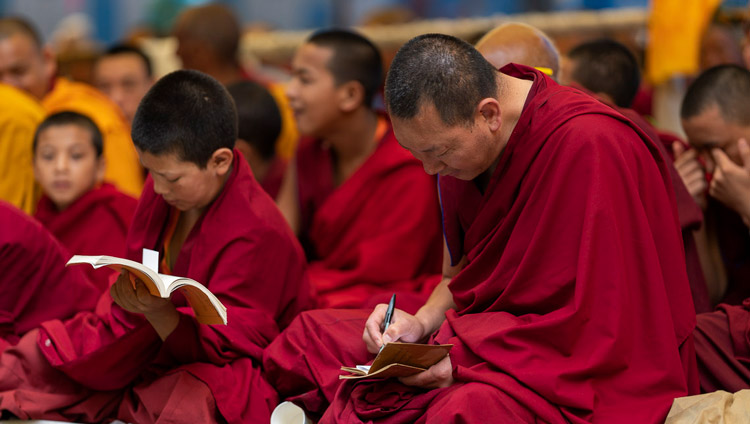 Monks in the audience following the text on the final day of His Holiness the Dalai Lama’s teachings in Manali, HP, India on August 18, 2019. Photo by Tenzin Choejor/OHHDL

Taking up the ‘37 Practices of a Bodhisattva’, His Holiness recalled that Togmé Sangpo was reputed to be a bodhisattva, someone with actual experience of bodhichitta. He lived in a cave in Ngulchu. He was an accomplished scholar who composed a commentary on Maitreya’s ‘Sublime Continuum’, but was also acknowledged for his humility and good nature.

His Holiness observed that the contents of the Three Baskets of the Buddha’s teaching Sutras, Vinaya and Abhidharma, were meant for individuals to practise. An individual of least capacity works to achieve the high status of good rebirth. One of medium capacity aims to accomplish liberation from the cycle of existence, while an individual of great capacity works to benefit all sentient beings by attaining enlightenment.

His Holiness noted that the two preliminary verses involve paying respects to Avalokiteshvara, embodiment of all Buddhas’ compassion, and declaring a promise to compose the text.

“Fulfilling these three ambitions requires study and practice as the line in the first verse recommends—‘Hear, think, and meditate unwaveringly night and day.’ We have a human life that affords an opportunity to distinguish right from wrong. To waste such an opportunity would be a great loss, whereas making use of it and cultivating virtue leaves positive imprints on the mind. At the time of death, only the wholesome practice we’ve done will be of any help.

“Seek and rely on a properly qualified spiritual master, someone compassionate who has insight into reality, who is eloquent and knowledgeable. Jé Tsongkhapa advised relying on someone who observes ethics, concentration and wisdom. Recall death and impermanence—who knows which will come first, tomorrow or the next life? Reflecting on the value of this human life and the ease of losing it spurs us on to practice.”

His Holiness mentioned that making incense offerings to deities is acceptable so long as we don’t regard the deity as an object of refuge. To do that would be to contradict refuge in the Three Jewels of Refuge—the Dharma, practice of which is the real refuge; the Buddha who is our teacher and the Sangha who are our companions. The Buddhas uproot ignorance and lead beings to liberation. They don’t wash away wrongdoing with water, nor do they remove suffering with their hands. They teach about reality. The Sangha comprises individuals who have direct experience of emptiness.

His Holiness told a story about Trehor Kyorpön Rinpoché, an accomplished scholar and adept, who stopped somewhere to rest after escaping from Lhasa. In that place was someone who went into trance. He declared that he was Shukden, so Trehor Kyorpön Rinpoché put a difficult question to the spirit which he failed to answer, so Rinpoché told him just to go away.

Nagarjuna and his followers used their intelligence; we can do that too.

Verse 8, which states, ‘Never do wrong’, completes the practices for achieving happiness in the next life. ‘Aspire to the never-changing supreme state of liberation’ in verse 9 refers to the practice of someone of medium capacity. The verses that follow deal with the path of those of great capacity, who ‘free limitless living beings and
develop the altruistic intention’. 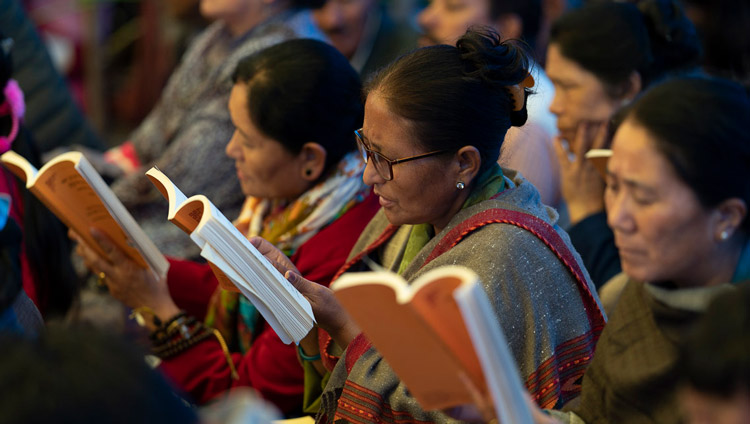 Members of the audience following the text on the final day of His Holiness the Dalai Lama’s teachings in Manali, HP, India on August 18, 2019. Photo by Tenzin Choejor/OHHDL

His Holiness remarked that since he had already explained the altruistic intention quite thoroughly he was not going to do so again, but would read the verses. Verse 11 advises, ‘exchange your own happiness for the suffering of others’. Verse 18 counsels, ‘Without discouragement take on the misdeeds and the pain of all living beings’. Verse 22 refers to ultimate bodhichitta. From verse 25 the practice of the six perfections are outlined. Verse 31 points out that ‘You may look like a practitioner but not act as one if you don’t examine your own errors’, therefore, ‘examining your own errors, rid yourself of them’.

After completing his reading of the text, His Holiness encouraged his listeners to read it again themselves whenever they have time. He assured them it would be beneficial to do so.

“Today, we’ve completed this series of teachings. With regard to yesterday’s empowerment, first visualise Lokeshvara in front of you as he was depicted in the thangka. Then, imagining he dissolves into you, recite the six-syllable mantra for ten rounds of your ‘mala’. Not that this will be much help if your mind remains unruly. Instead of ridding yourself of afflictive emotions, you’ll just wear out the nails on your fingers. Try not to think only of yourself, but of all sentient beings.”

He declared that he was happy to have been able to teach and that he was grateful to the interpreters who had rendered what he said into Hindi, English and Chinese so he could be readily understood.

“Whether the Dharma is effective or not depends on whether you manage to transform your mind. Having heard the teachings from me, it’s up to you to effect that transformation. Your neighbours should be able to see a difference in you, if you practise well. Pray that Avalokiteshvara will care for you in life after life. Until we meet again.”

A representative of the organizers made a financial statement.

His Holiness left the stage and returned to Ön Ngari Monastery. The weather began to improve.